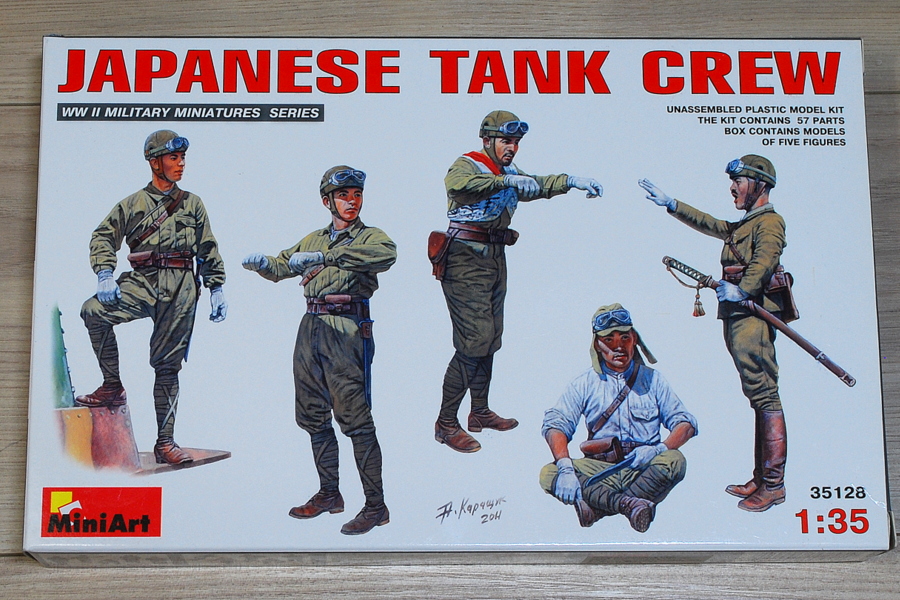 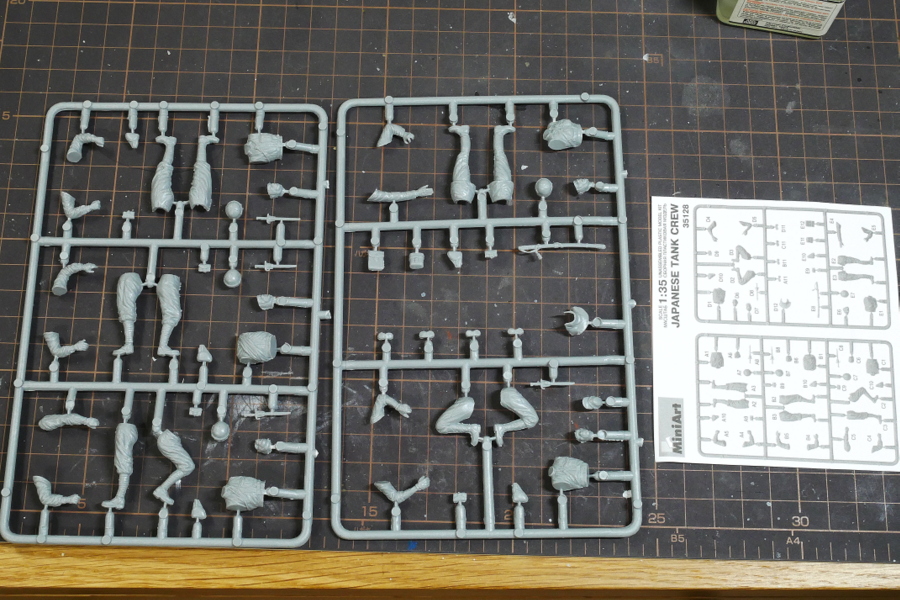 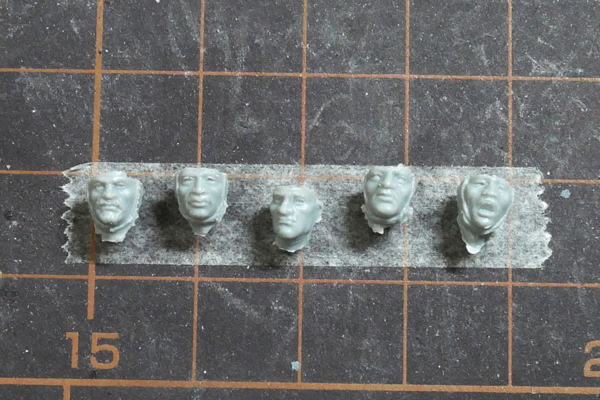 The head of the kit has various expressions. The left and center are pretty good. But this time I decided to use a resin head which is sold separately. 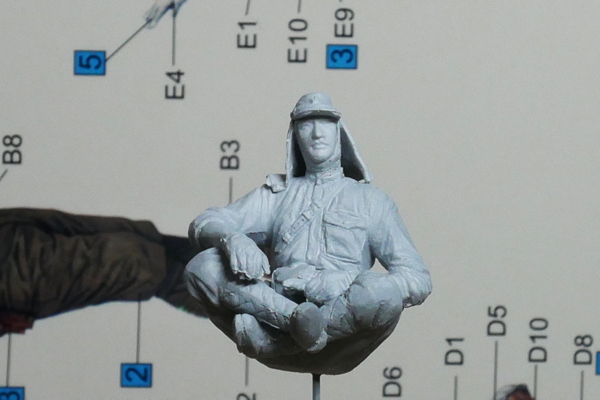 I tried to replace it with a resin head by force, but the mold of the tank cap was not removed well, so it was not suitable. Hahaha, ah… I will try to paint it to the last. 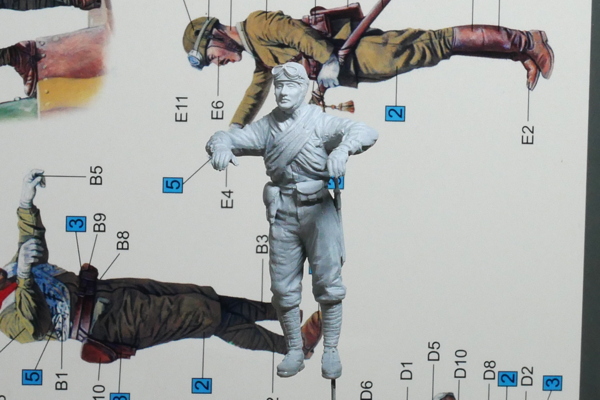 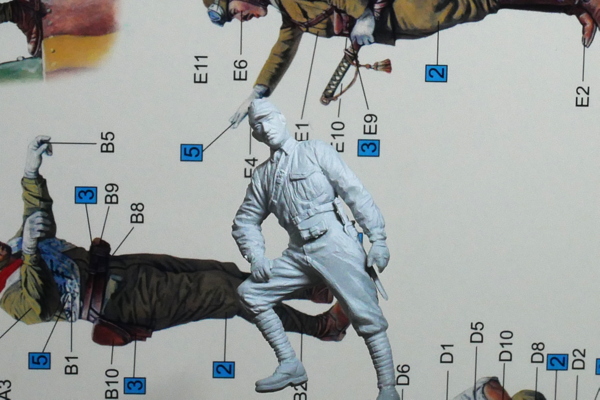 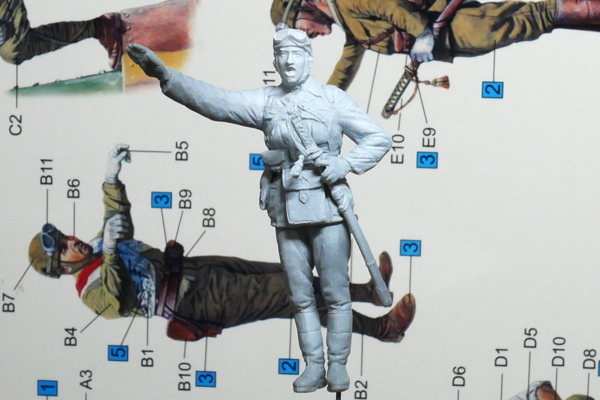 The other figures were successfully replaced with resin heads. The wrinkles on the uniform are also natural. I think they are cool guys. 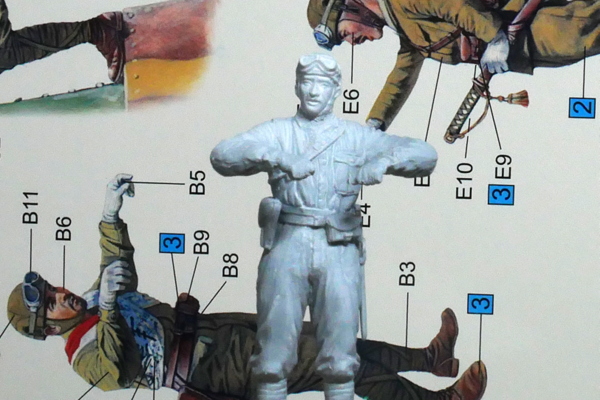 I tried blowing the white surfacer after completing the assembly. It’s still gray. As expected, I need a tank because there are figures with unnatural poses unless I combine them with AFVs.
(2020/03/11) 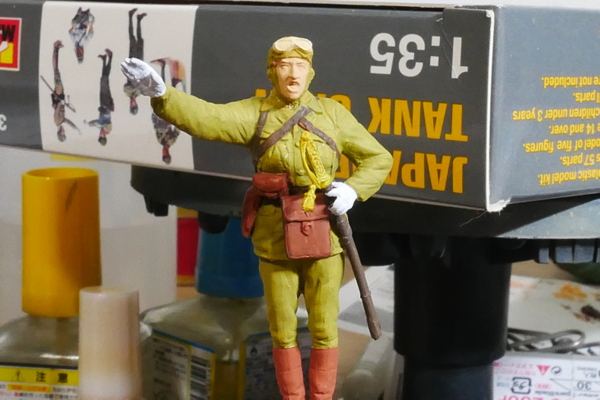 Now I’m painting the figure. The uniform is painted in Vallejo middle stone. There is also a color of Vallejo called WWII Japanese soldier uniform. I think the middle stone would be a better match this time. 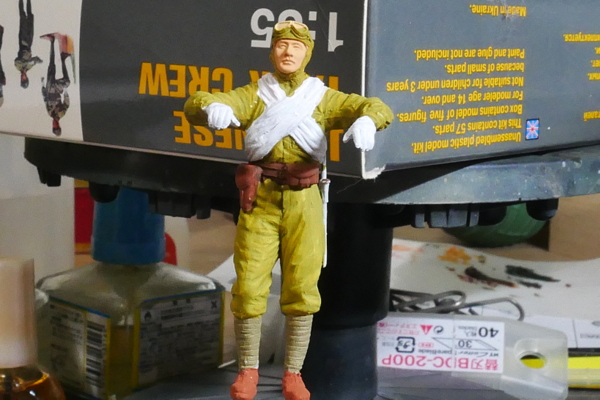 This is a tank crew with the Japanese flag wrapped around his body. 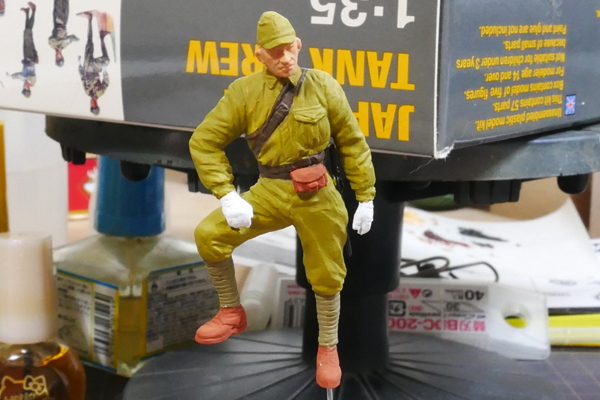 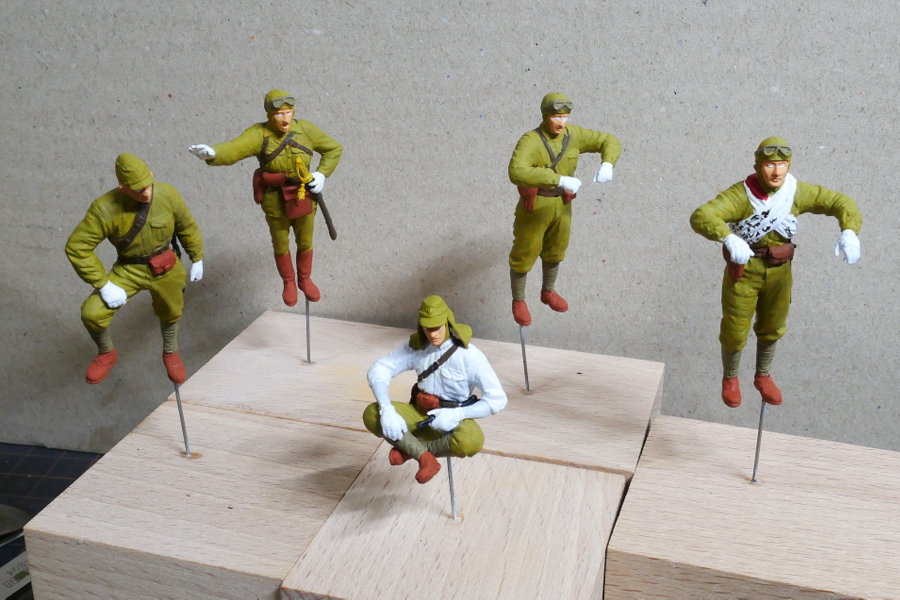 This tank crew set all wore white gloves. The skin color was only on the face. I forgot to paint the arm of the soldier sitting cross-legged.

Compared with other countries in the world, the number of infected people in Tokyo is extremely low. I’m afraid it’s completely covered up. No matter how much they control information, no one believes in it. To be honest, at this stage, news about Tokyo is as unreliable as news from C Country.
(2020/03/14) 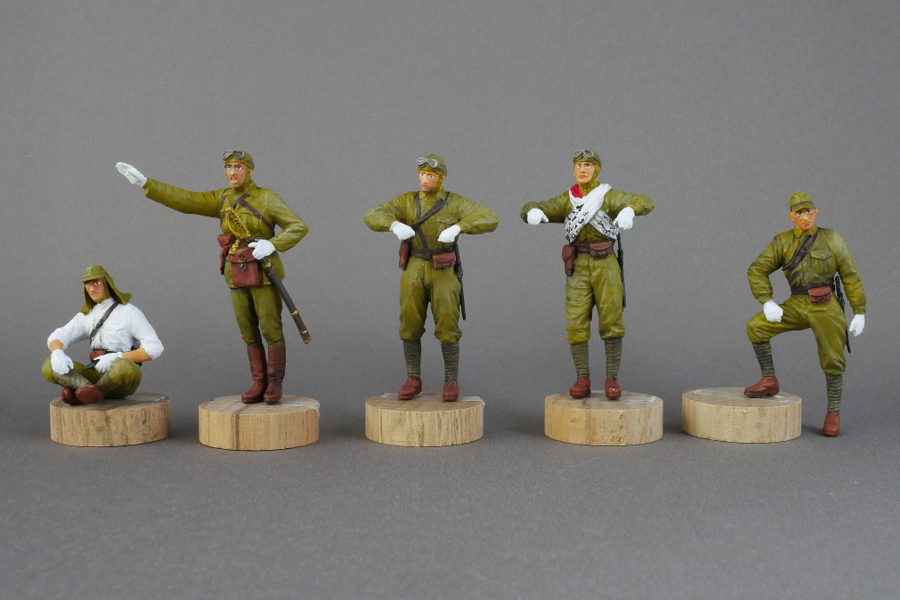 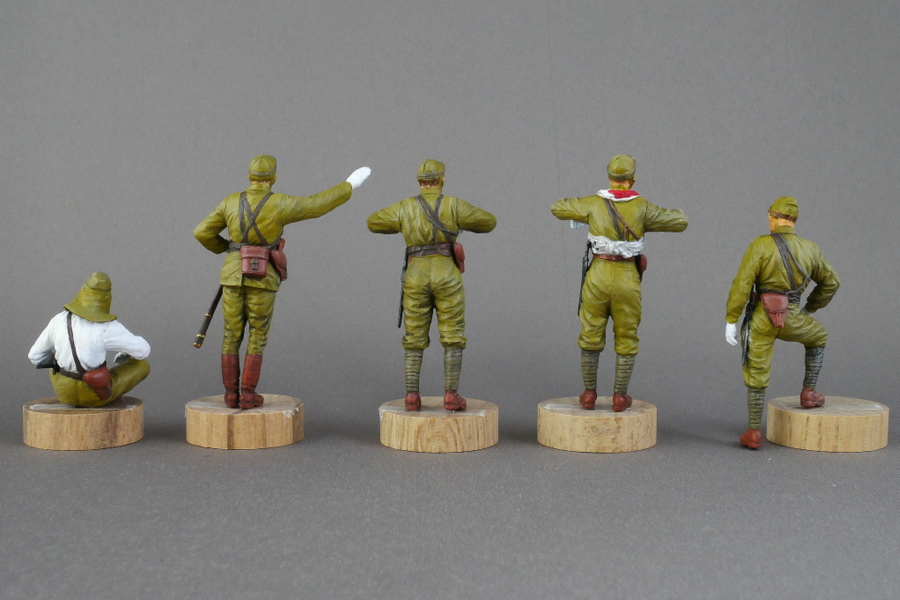 Five figures of the Imperial Japanese Army tank soldiers have been completed. Except for the figure with a military sword in one hand, they look like work clothes. I wonder it’s better to draw a rank badge? It’s too small and difficult to draw, so I’ll pass this time. 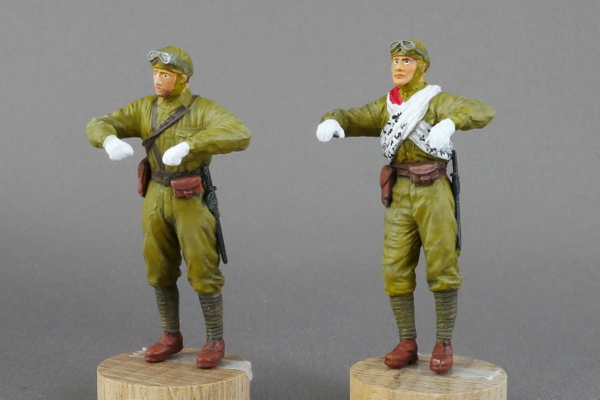 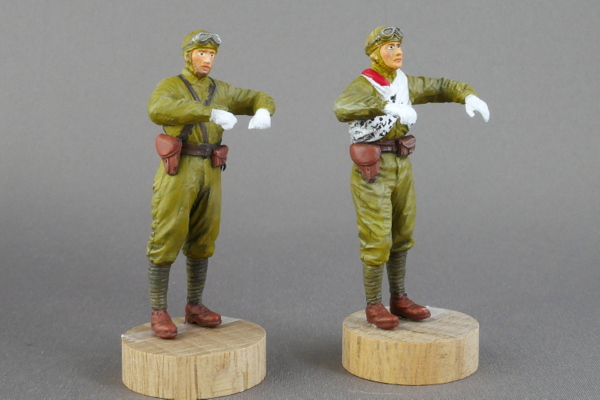 The flag was written many messages on the Japanese flag wishing for military fortune and survival. This is the tank soldier who wrapped this flag around his body. 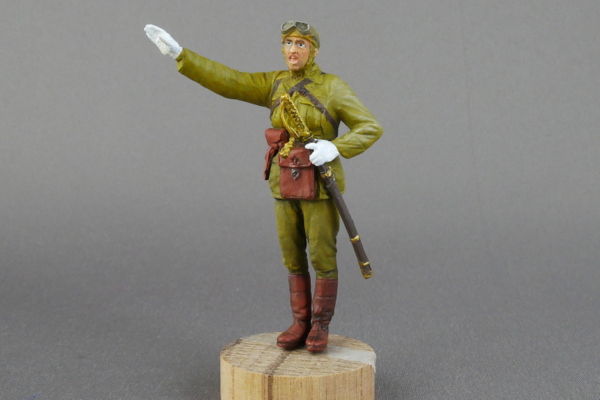 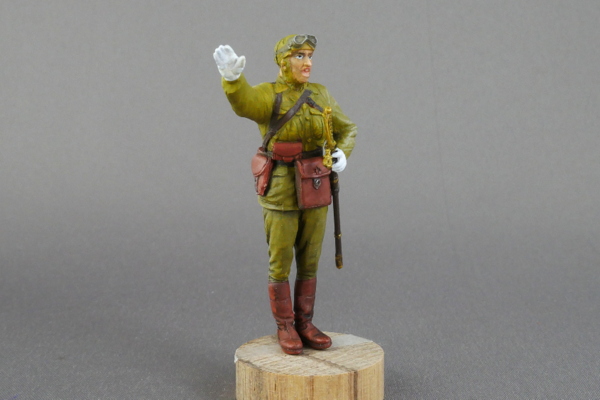 The tank cap of the Imperial Japanese Army is strong enough to protect the head in the tank, and it doesn’t have high bulletproof performance. 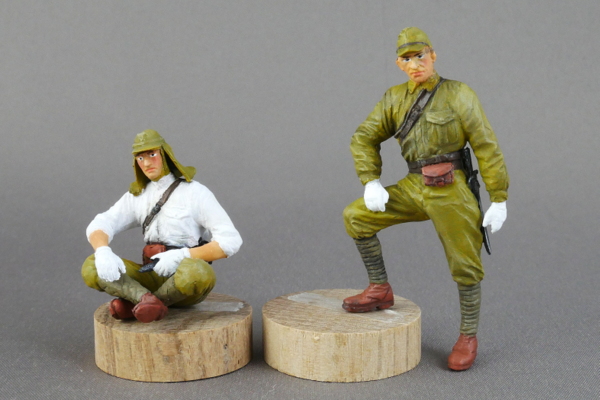 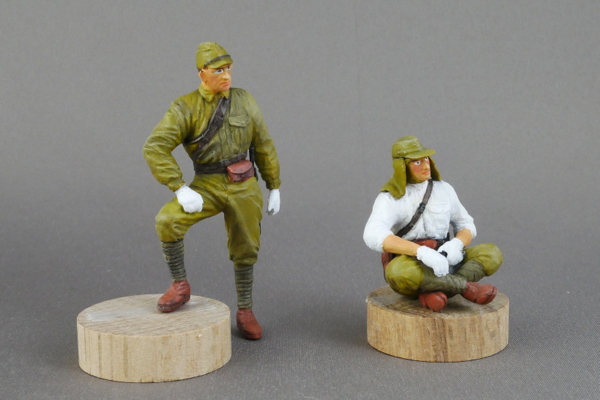 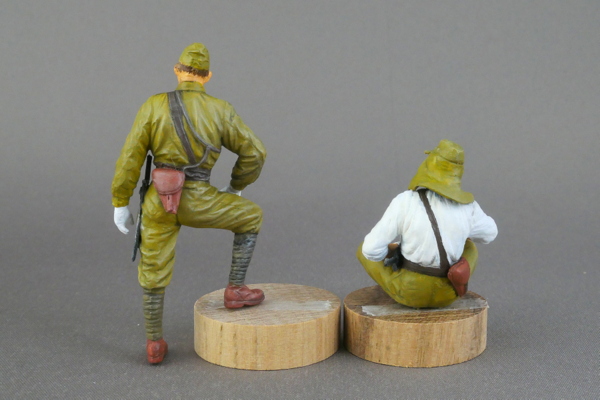 All five of them look like wearing thin fabric uniforms. I think the figure for the southern battle line or summer season is more suitable. 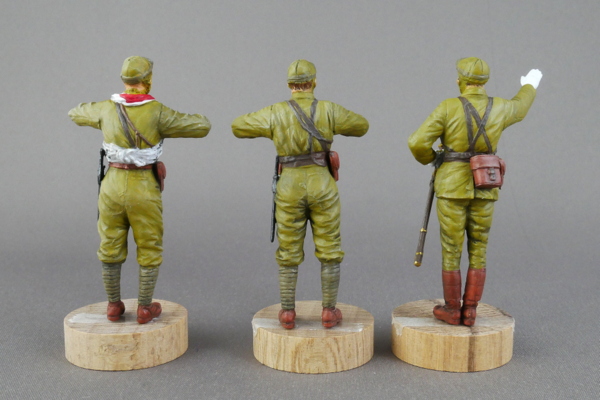 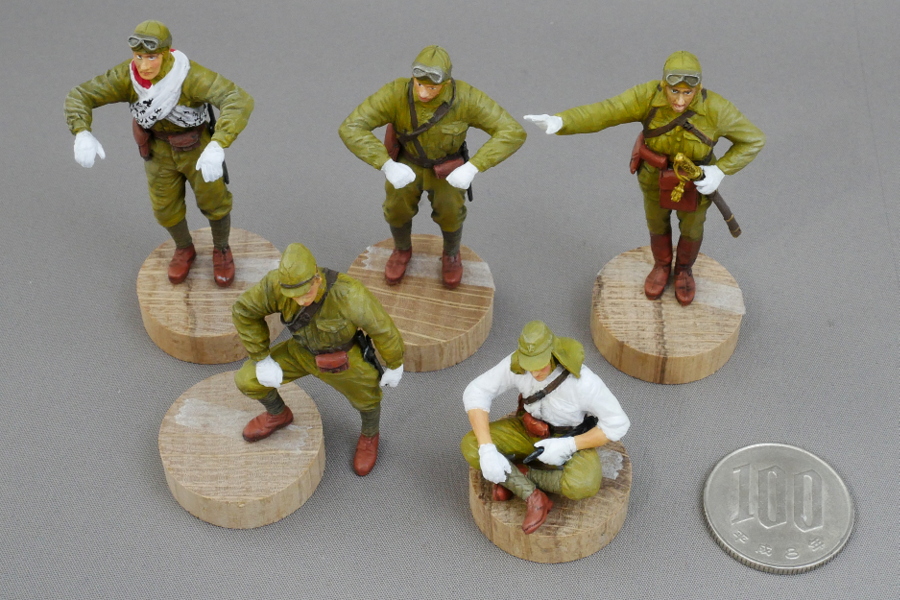 I compared the size with the 100 yen coin and the Japanese Army tank soldier. I will make a Japanese tank in my stock for these tank soldiers.
(2020/03/17)

It's an Imperial Army tank crew. Now that I've started this tank soldier, I want to build some Imperial Japanese tanks...

It's Tamiya's Zero fighter pilot figure. The 1/16 scale is much larger than the 1/35 that I usually make. standing in flight suits and life jackets. Of course, the mold of the face was very good, and the military sword was unexpectedly cool.

It is a fairly old kit of Tamiya. The Japanese Army infantry set. A hat with a sunshade is characteristic of Japanese soldiers. Soldiers with Type 89 grenade launchers have 2 ammunition bags that can hold 4 bullets around their hips. The diameter is 50 mm and the weight is 4.7 kg. It's a rare weapon.

Master Box figure set, Imperial Japanese Marines. Even though this kit was an injection, it was expressive and there were many props, so I enjoyed making it. It's strange that I can enjoy it in a rush scene, but I think it's a good kit.

I made a set of Japanese Ground Self-Defense Force tank crew with Finemolds. They are wearing uniforms used from 65 to '90s. All 4 of us are wearing Type 65 work clothes and I was wondering what color to paint with. It will match well if you put it on a Type 61 tank.
スポンサーリンク
French Soldier and Bicycle WWII Era Masterbox 1/35
Japanese Tank Type 1 Chi-He Finemolds 1/35