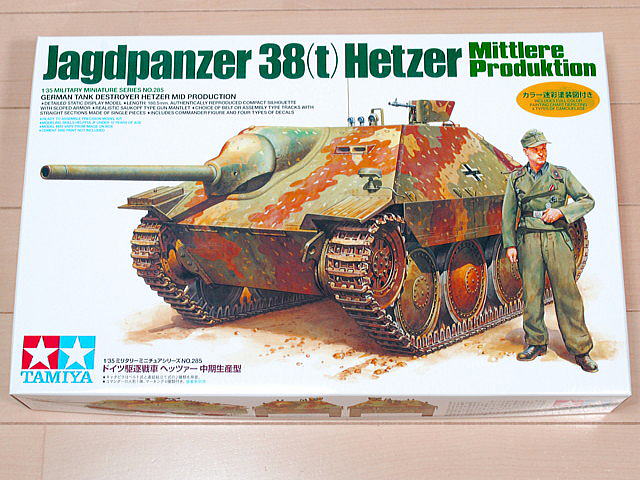 The Hetzer’s armament is the 48 caliber 7.5cm antitank gun in a small vehicle based on the body of the 38(t) light tank. This kit was released about one and a half years ago. 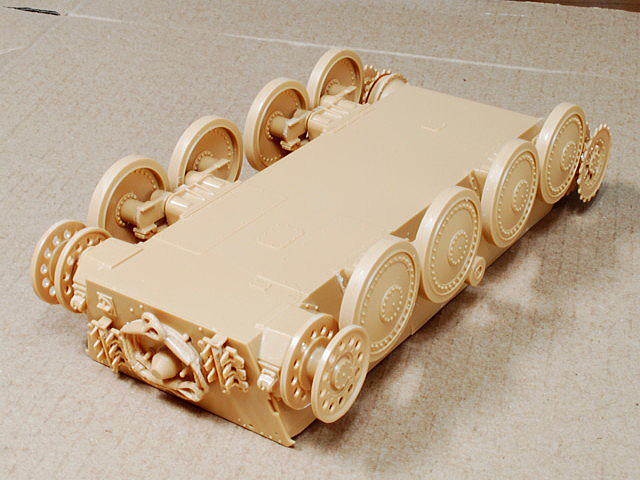 The chassis is the same as 38(t) and simple, there are only eight big wheels. 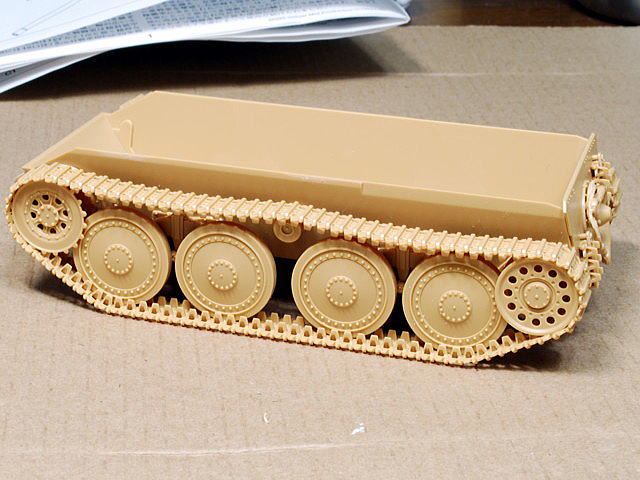 I installed the partial link caterpillar. Since loosening can be easily expressed, I like these recent Tamiya styles very much.
（2009/02/21) 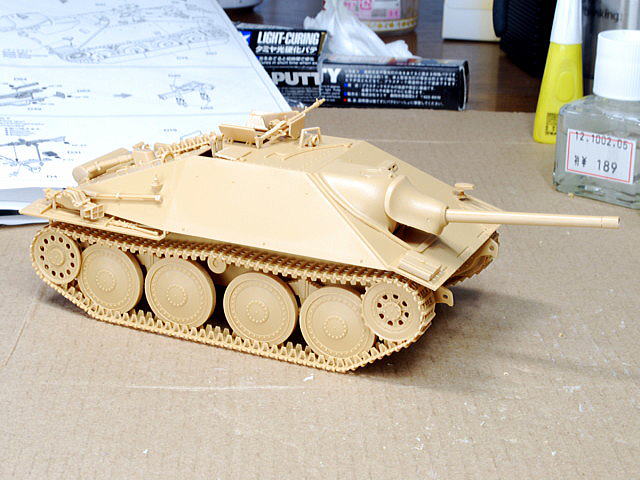 Is it because the inside is narrow, it is a feature that the gun shifts from the central line. There are spare caterpillars on the upper surface and the back. 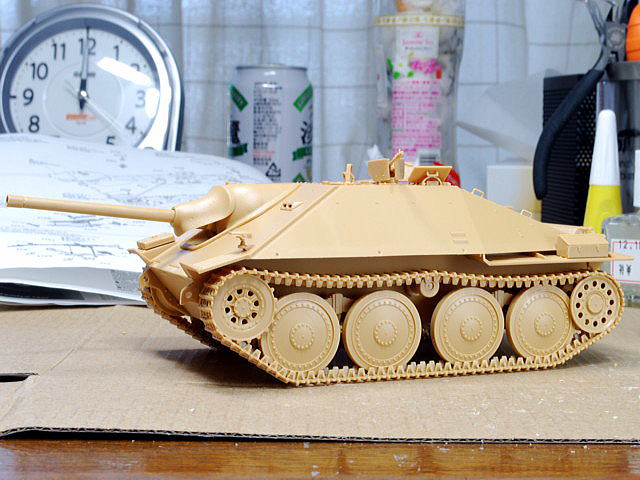 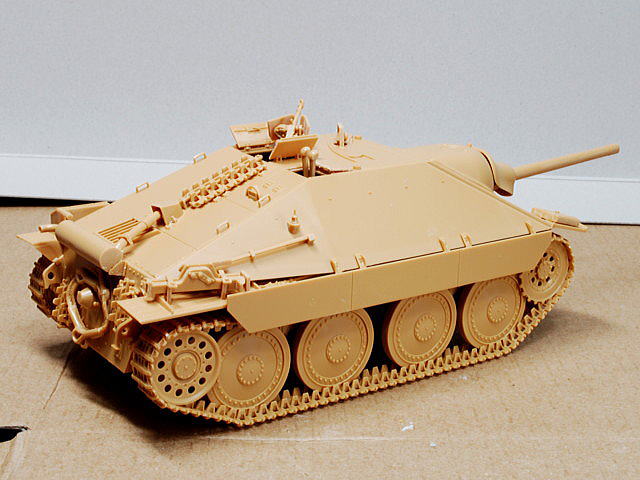 The atmosphere changed entirely only installed side armor. 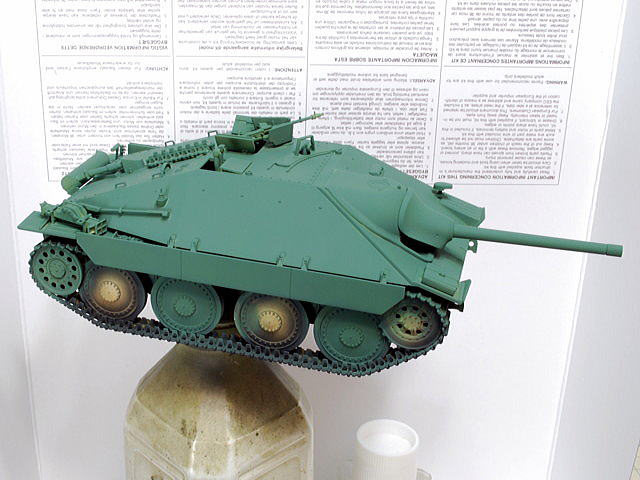 The basic painting was dark green. It seems to be still long ahead since I challenge ambush camouflage.
(2009/02/28) 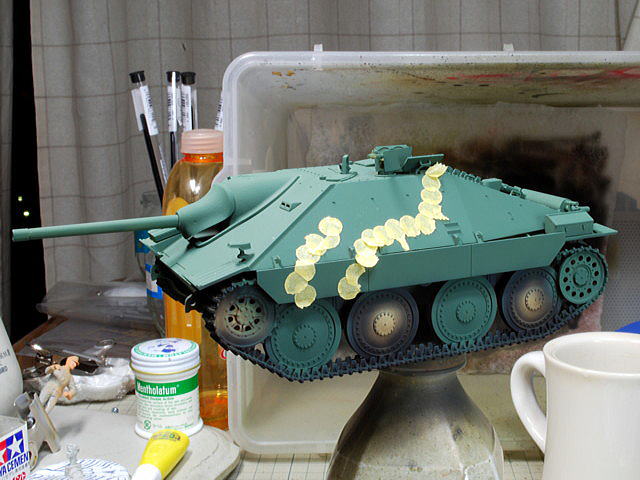 I thought that produced a large amount of masking tape by the punched hole opening, put them like a photo…
However… It is too troublesome.
（2009/03/20） 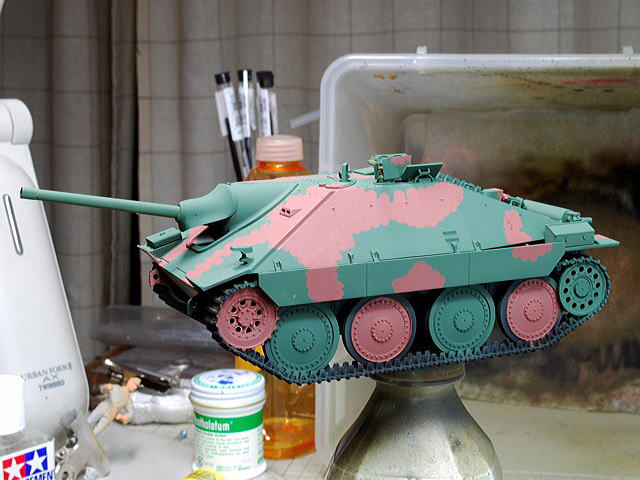 After all, I decided to go ahead without even worrying if there was a somewhat irregular brush. It’s long hands.
（2009/03/20） 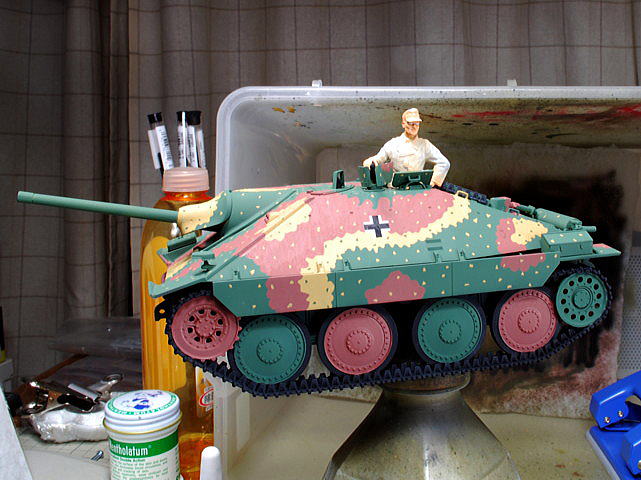 I managed to do the basic painting completion and placed the figure. Maybe it went well hand-written camouflage painting.
（2009/03/24) 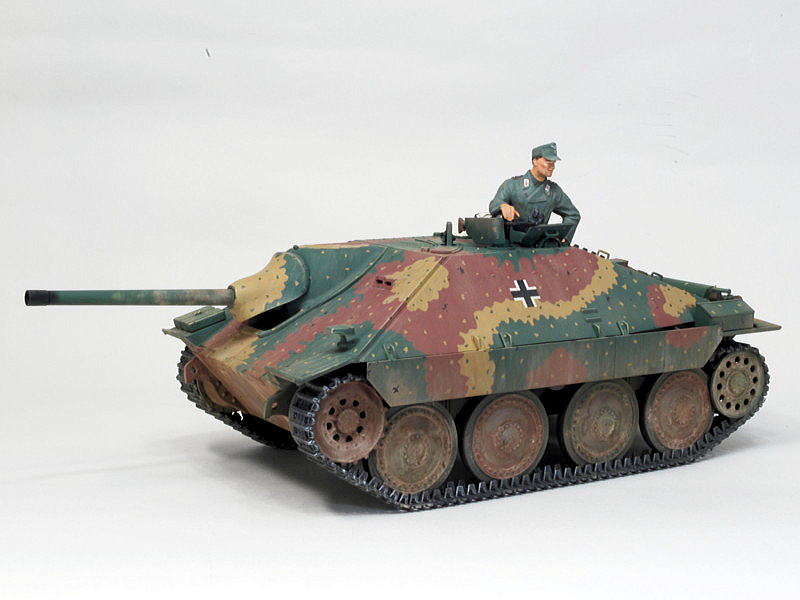 This is a German Tank Destroyer that used the body of 38(t). It is a vehicle in haste developed since the factory of Sturmgeschutz III was destroyed by the bombing of Allied Forces. 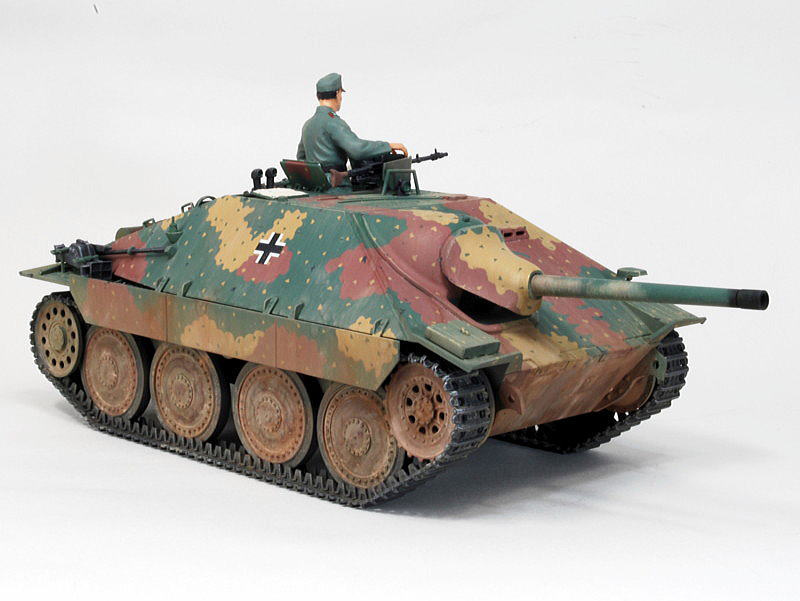 This light tank equipped the 7.5cm antitank gun. The performance was good so it has played a part in the German defense till the end of the war since the summer of 1944. 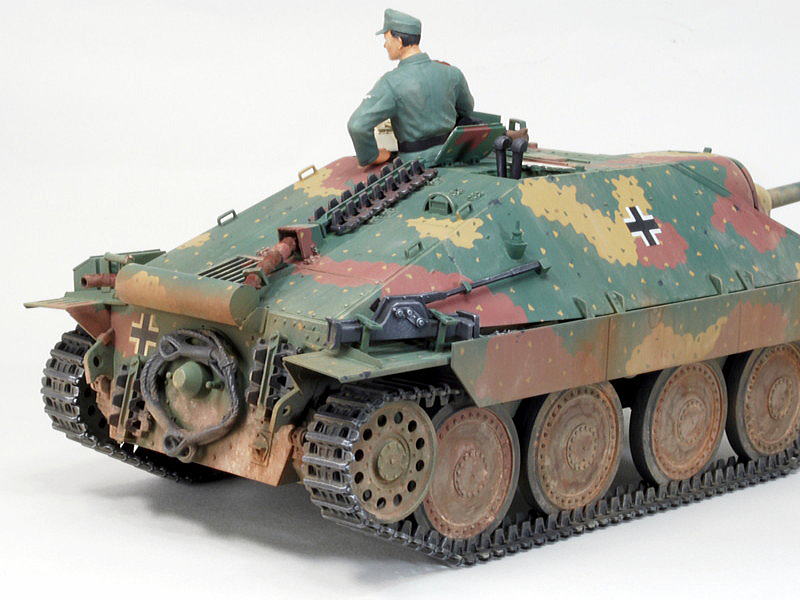 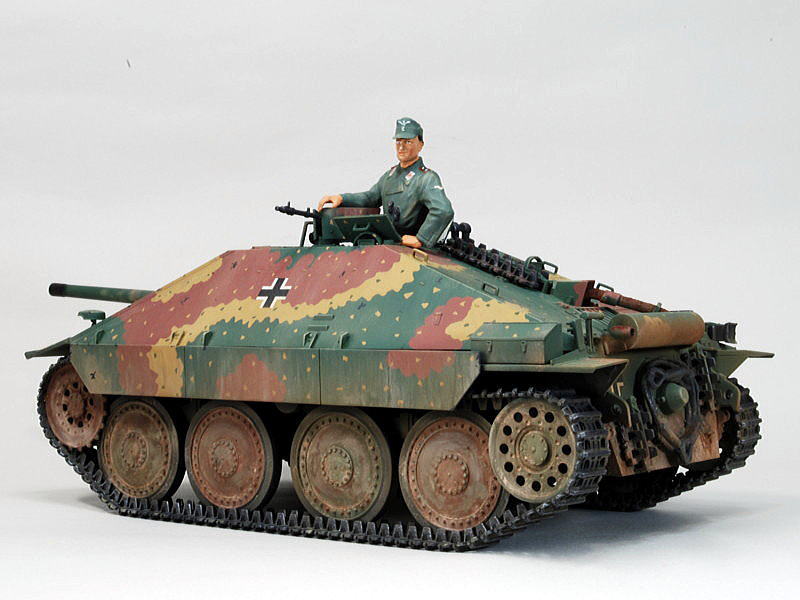 The tank soldier uniform was not black. I suppose their uniform color was normally field gray. 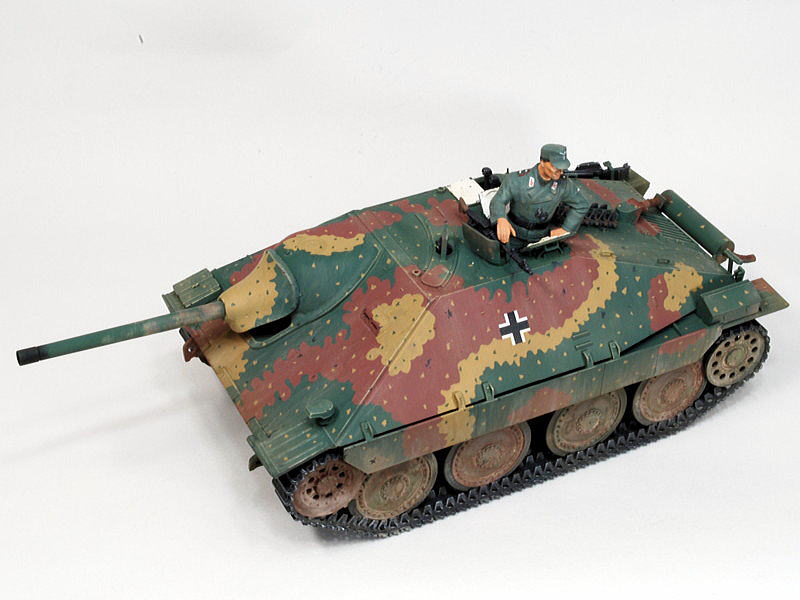 It seems narrow inside to operate by four crew. It is likely not to have been discovered easily from the enemy since height is low. 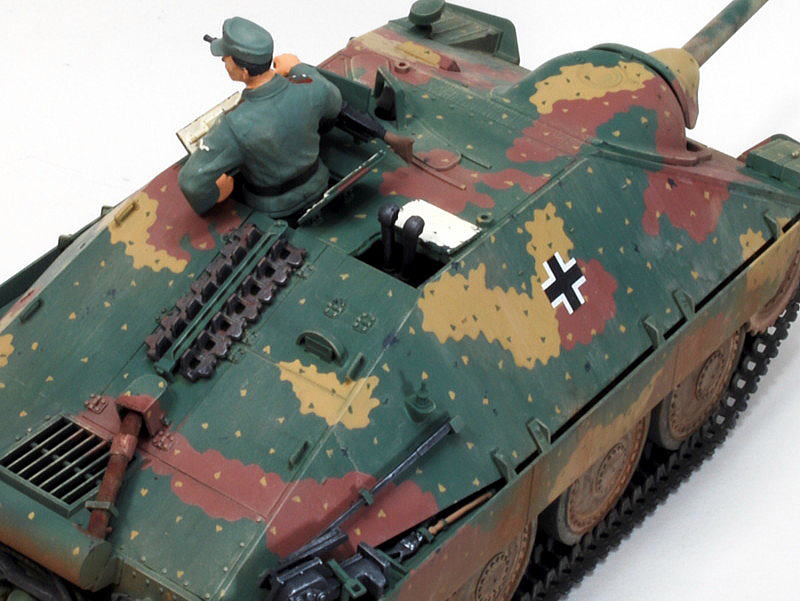 Camouflage paint is by brush painting. To draw triangular, square dots, perseverance is required. It’s important to adjust the density of paints so the paints of a moderate density might be good drawing by one stroke. 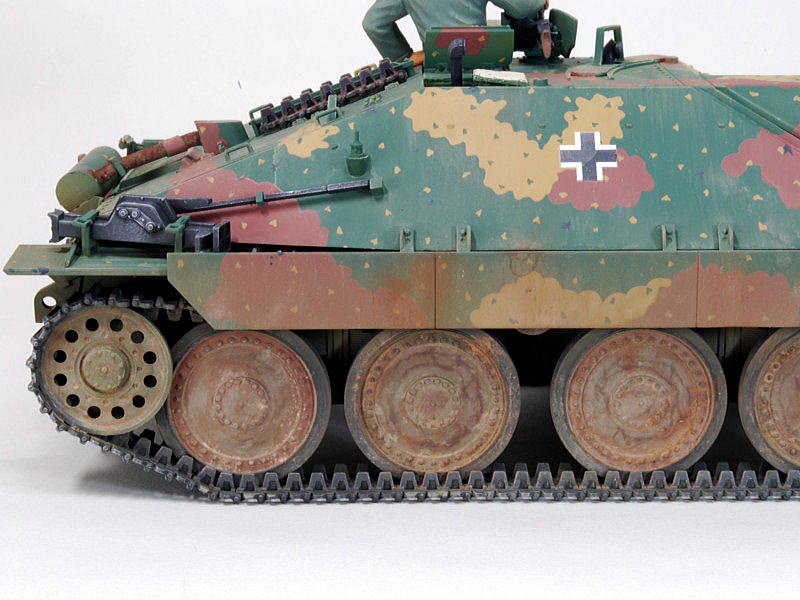 I painted the trank rollers separately, one is dark green and the other is red-brown. But weathering trial and error, all appearances are the same now… 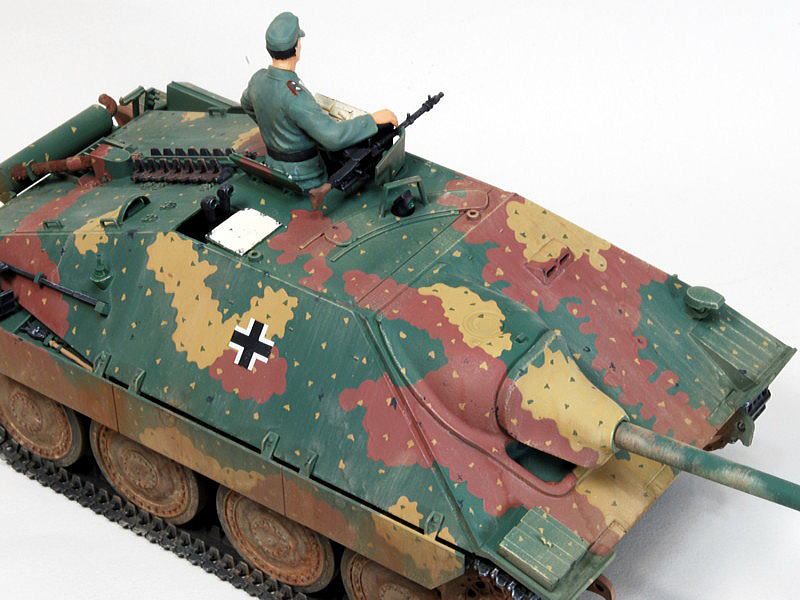 The painting example was Strumgeschutz-Abteilung 1708, 708. Volks-Grenadier-Division. It was the forces that deployed to Halloville France in 1944. The color painting description of this kit was useful.

The sloped armor is peculiar but nice looking. Ambush camouflage was the first time for me and was enjoyable.
（2009/03/22)

I made a Meng Model Panther. ​This tank marking is the 11th Armored Division 10th Armored Brigade 39th Tank Regiment 52th Battalion 6th Company 3rd Platoon. It is rare for a snorkel to be set upright.

It's a Bronco Sturmgeschütz III Ausf. E. The marking of this tank is German StuG. Abt 177 on the Eastern Front in 1941. The connected track is included in the kit, which is a point of a high evaluation. I love the overall angular form and the antenna case.

I wonder if Sd. Kfz. 223 is a renewal of the old kit of Tamiya or something. There was an etched part in it. The vehicle equipment and figures were of the same quality as before. It's Afrika Korps the 15th Armored Division, the motorcycle battalion.

It's Tristar Panzerkampfwagen IV Ausf C. It's a nostalgic kit. The marking is the 1st Armored Division. Bluish German gray is interesting as it has a different taste. Since the firepower was not strong, they were deployed in the second-class unit after the middle of WWII.

It's Zündapp K800 from Vulkan Scale Models. There was also a motorcycle soldier. The spokes on the wheel of the etched part are realistic. It is difficult to match the figure and the motorcycle.
スポンサーリンク
LAV-AD USMC Light Armored Vehicle Air Defense Trumpeter 1/35
M3A3 Stuart U.S. Army Light Tank AFV Club 1/35