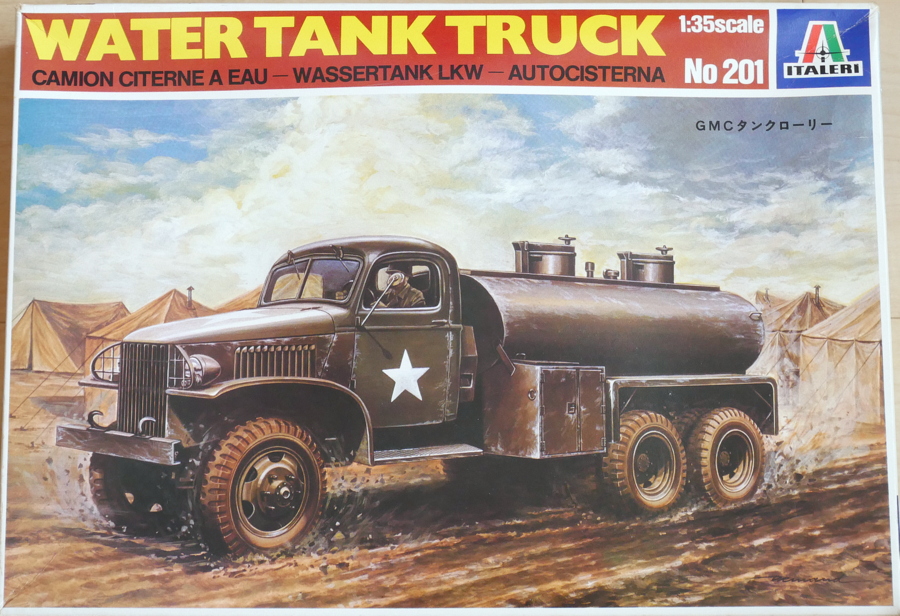 It is a water tank truck which is so old that I don’t know when I bought it. There seems to be a new box picture package now. 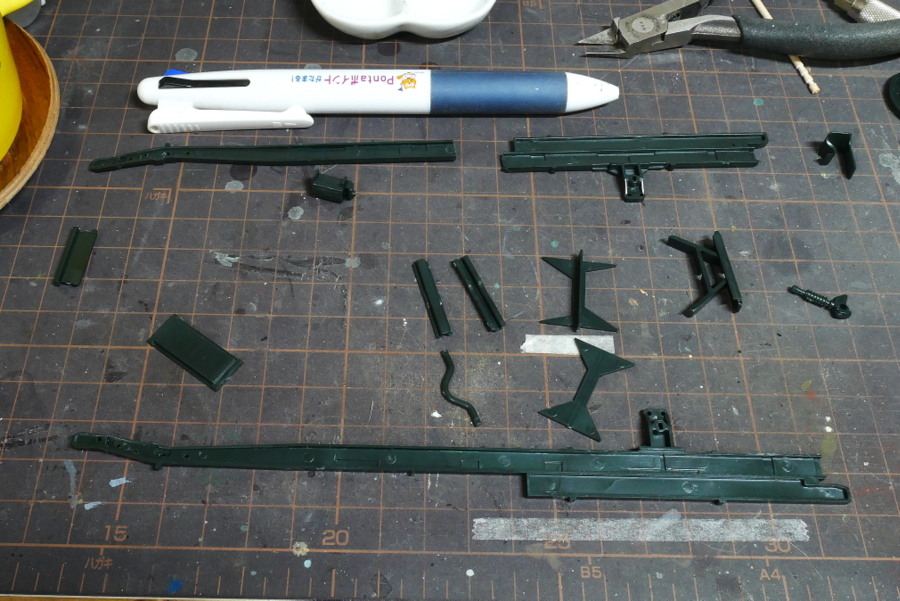 I don’t know if the plastic has deteriorated or the Italeri plastic was originally like this, but one of the chassis frames was broken. I think the old Italeri kit is originally hard and fragile. 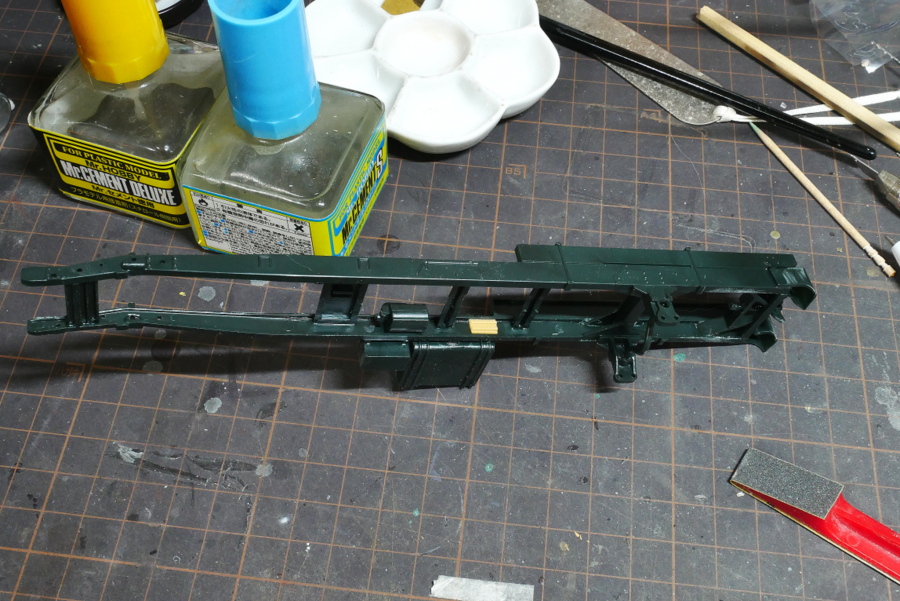 I reinforced the broken frame with a piece of plastic. 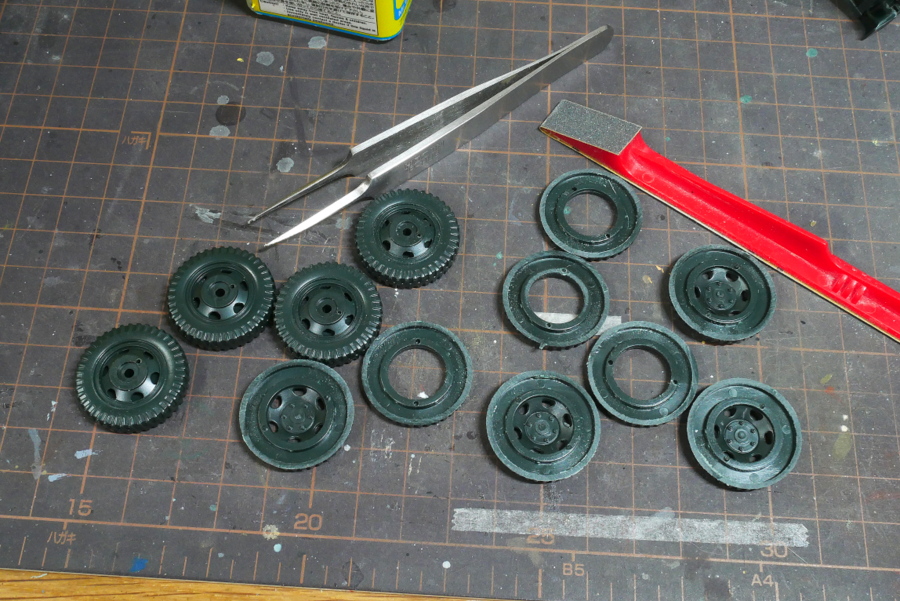 The rear wheels are double and there are many parts. A spare tire is also included. 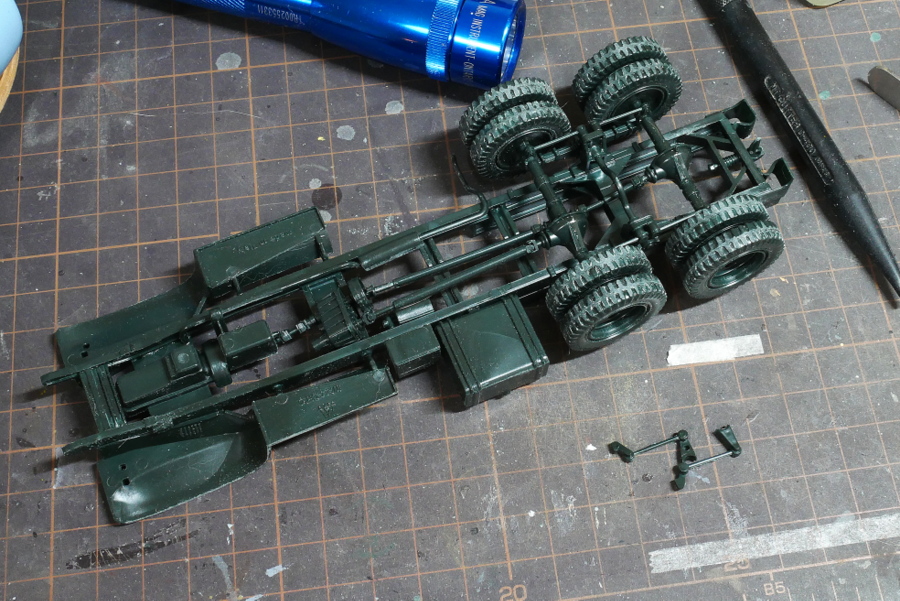 If I look closely, the power is transmitted to all six wheels. The shaft is connected. 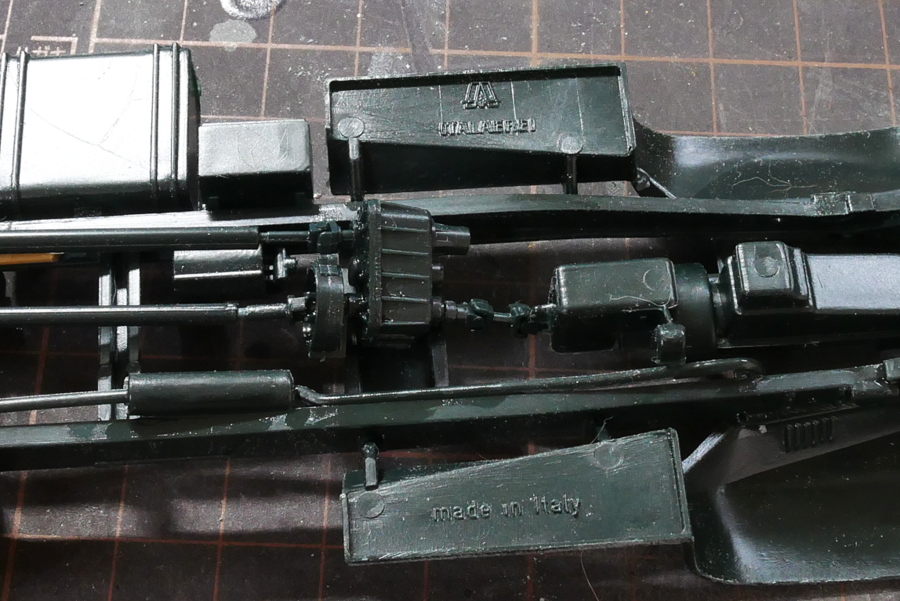 The Italeri logo and “Made in Italy” are engraved on the back of the track steps. 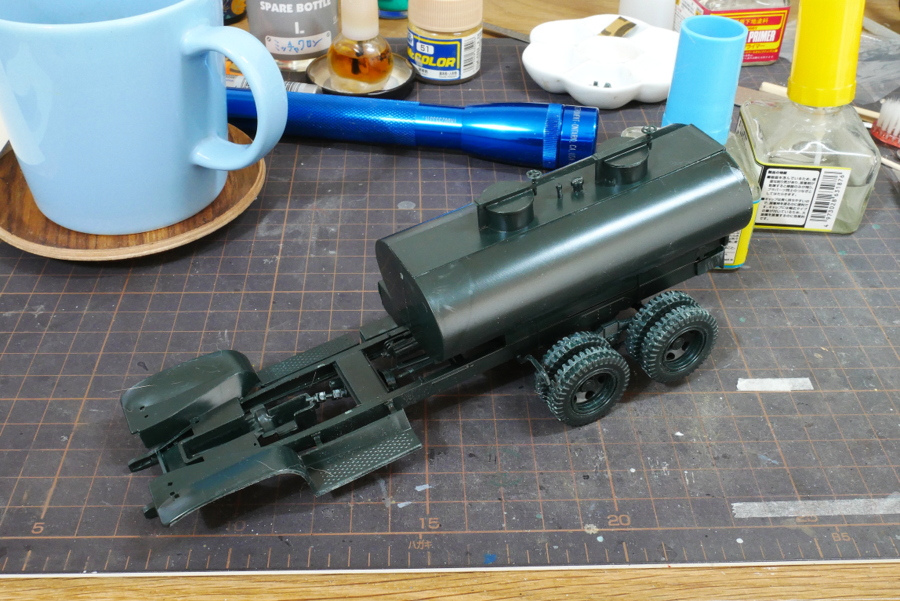 It is a small matter, the two valves at the top of the tank. These valves are easy to break when they are first glued and later when other parts are assembled. I should have glued it at the end.
I left this kit alone around here for about a year. Maybe it was too much bother to move on to the painting in the middle of the building, I think I was looking for another kit.
(2021/08/26) 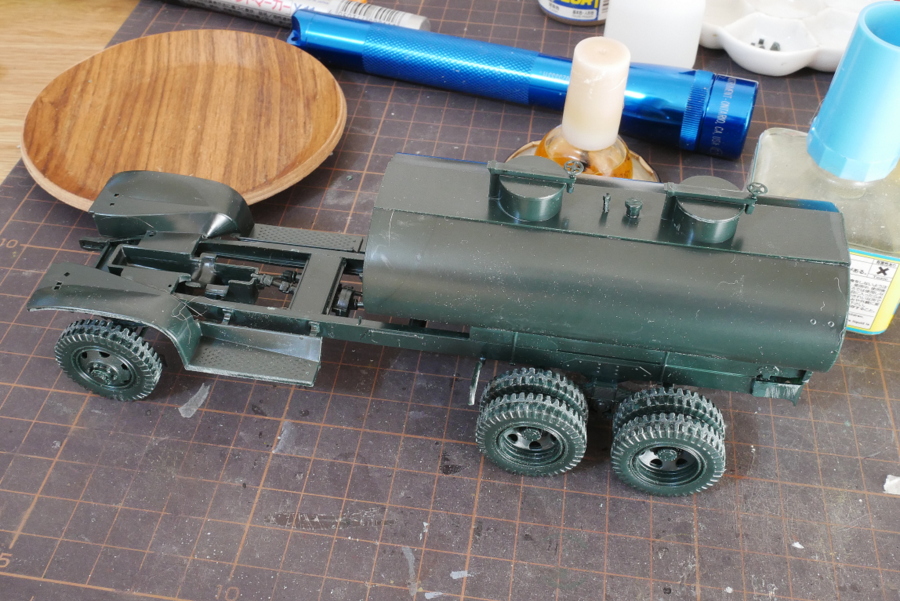 At this point, I can finally confirm that the 6 wheels are properly grounded on a flat surface. This time, it was grounded cleanly without any trouble. 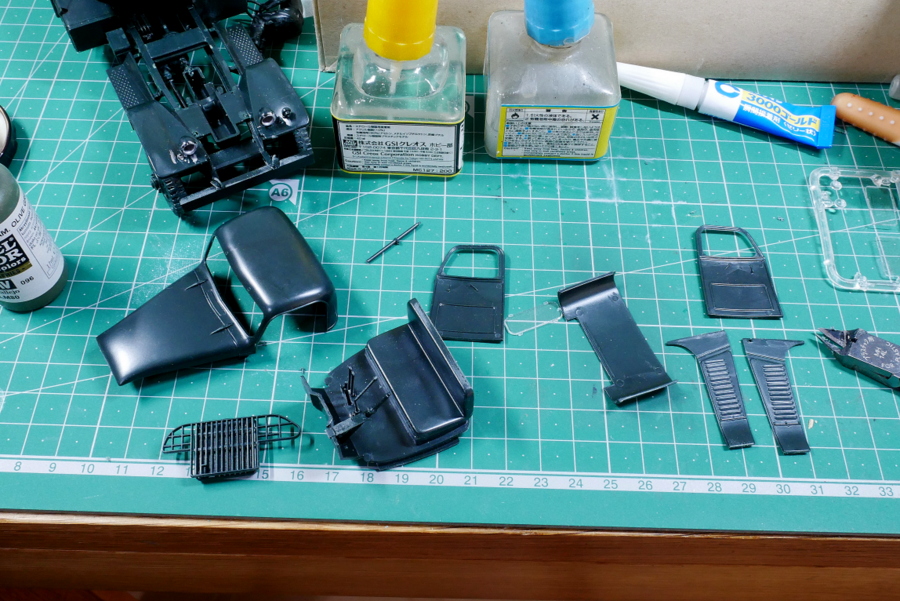 The work stopped before the painting in the driver’s compartment. I’ve been making other kits for a while. It is quite difficult to assemble a plastic model of a truck with a long front. Other than that, it takes time and effort to adjust the figure in advance and paint the driver’s compartment inside. When I finish around here, the rest is almost as usual. 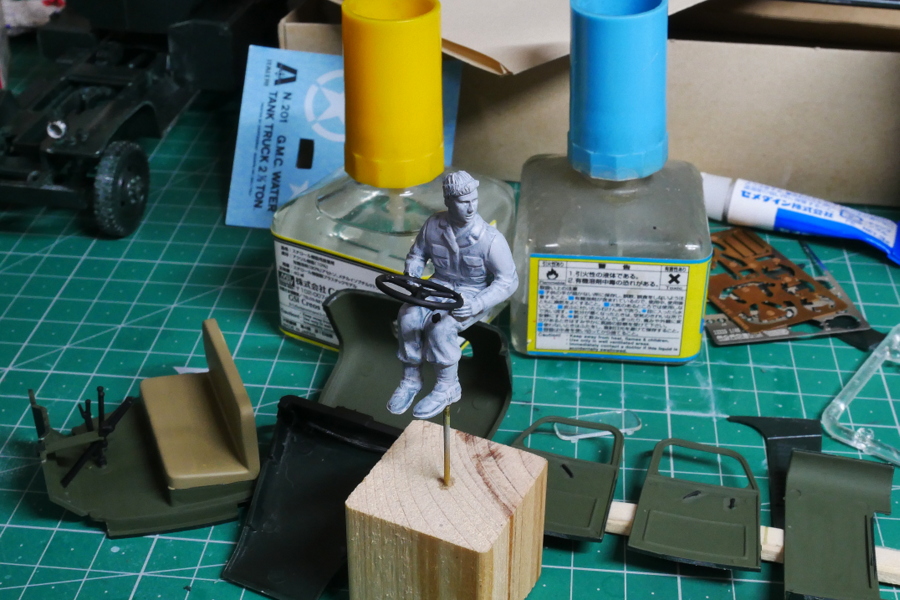 This Italeri kit includes a driver figure. Since this is an old kit, the mold and the appearance of the face are not so good, so I changed the head at least. The body and head are part in one piece, so the neck is cut off with nippers. The joints are not that good. I made it into a natural pose by turning it slightly to the front. 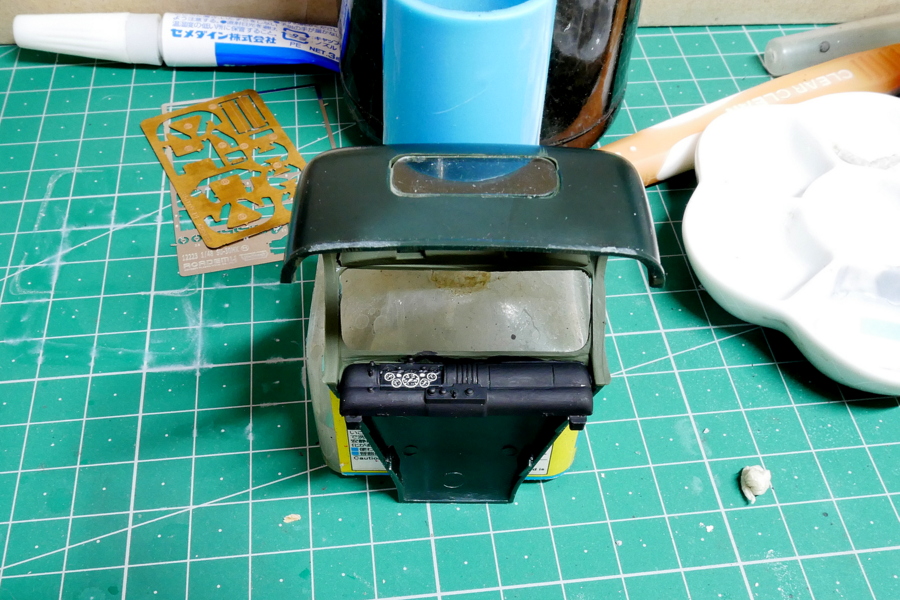 The meter panel was equipped with a decal. 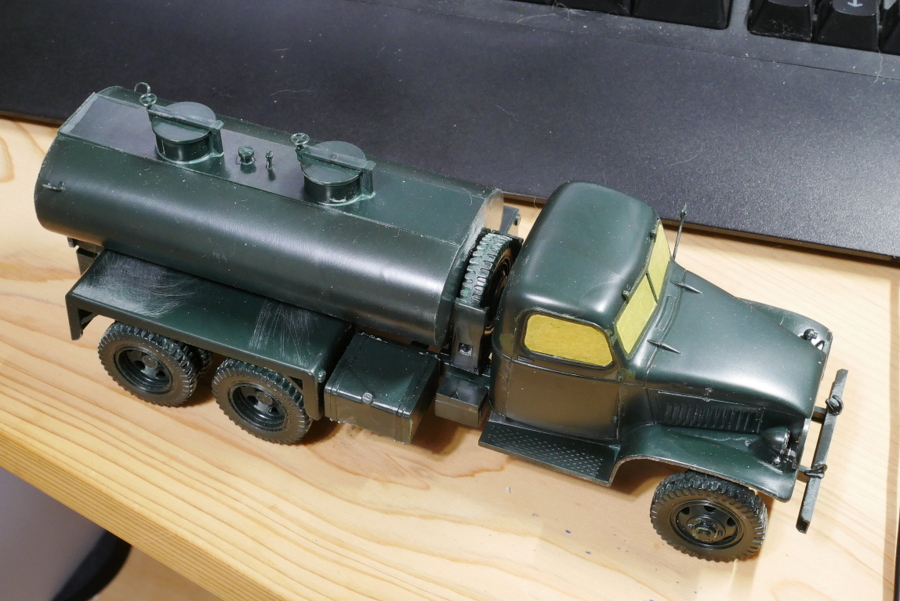 The clear parts were masked with masking tape. If left here, the paste will deteriorate and become dangerous, so I want to proceed to paint as soon as possible. Come to think of it, I’m getting worried about a Russian aircraft kit of Academy which is left so long with the canopy masked. 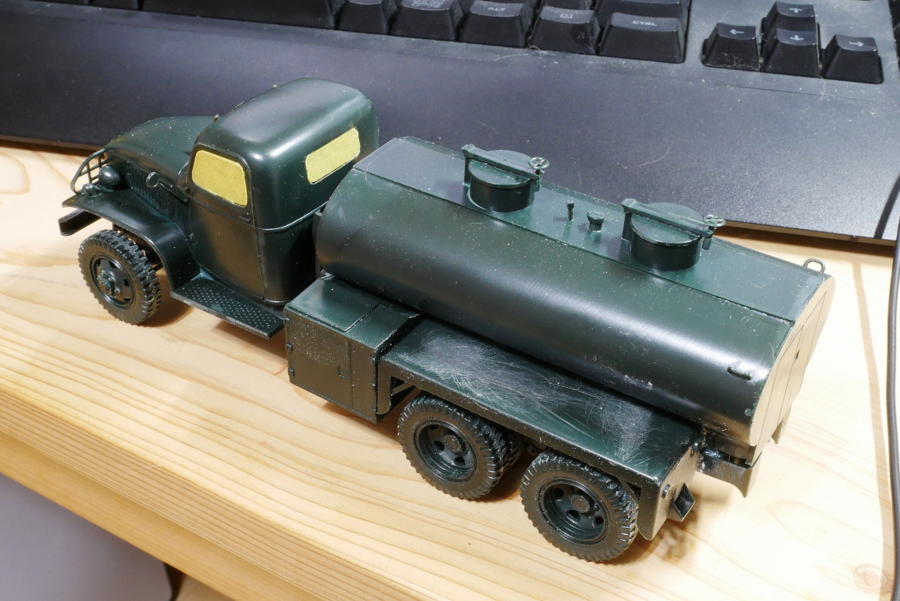 Overall, there were a lot of burrs. I have cleaned the places I can see. 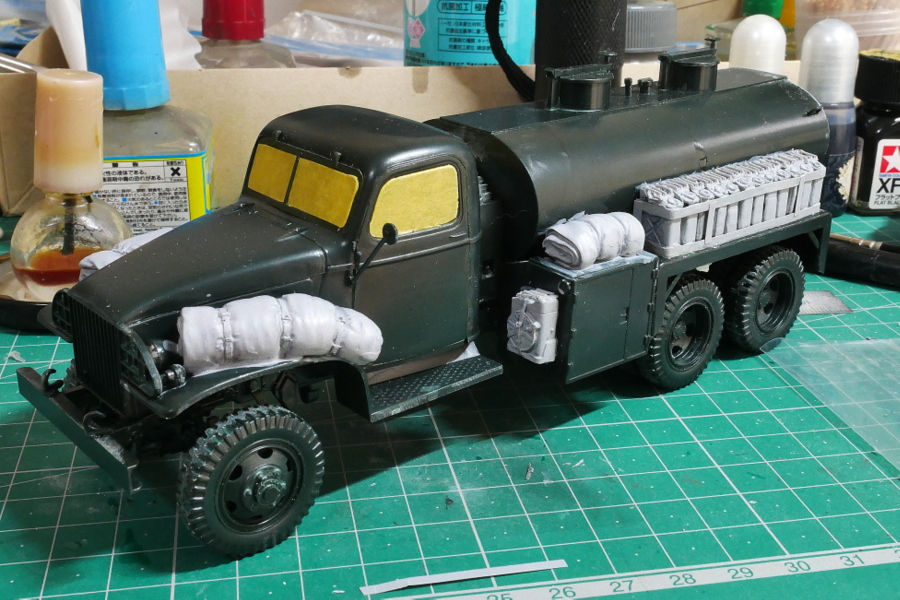 I loaded various additional parts. It might be a good idea to wrap the chain around the hook in front of the truck later.
(2021/08/31) 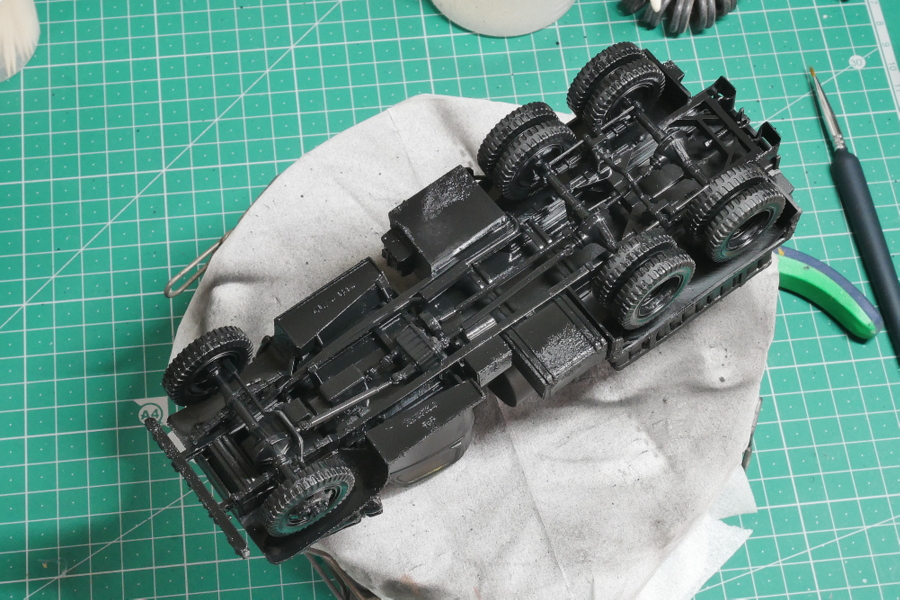 I painted it black for the first. I think I don’t need to paint basic colors because I can hardly see the bottom of the track. I might paint the back of the tire a little. 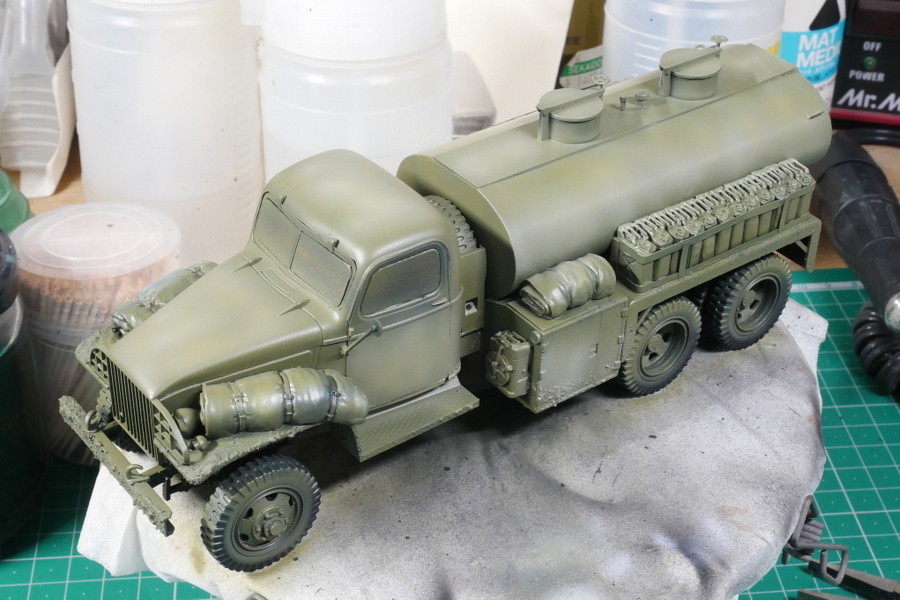 This time again, I mixed the NATO green and olive drab colors. I will try to add a little more shading to the jelly can later. 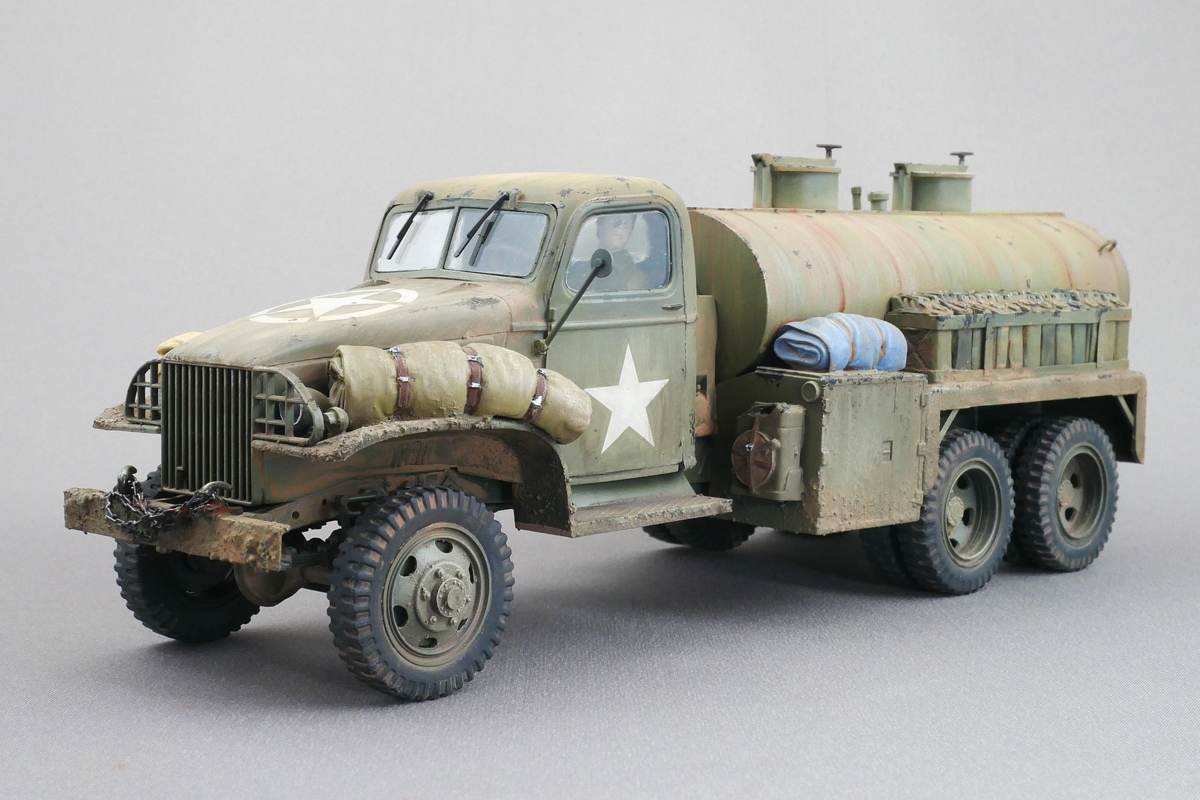 A water tank truck of the U.S. Army was completed. When I saw the box, I thought it was a gasoline tank truck, but it was a vehicle to supply water to the ground troops. A large water tank is installed on the loading platform. The truck’s tank was able to hold 2,650 liters of water. 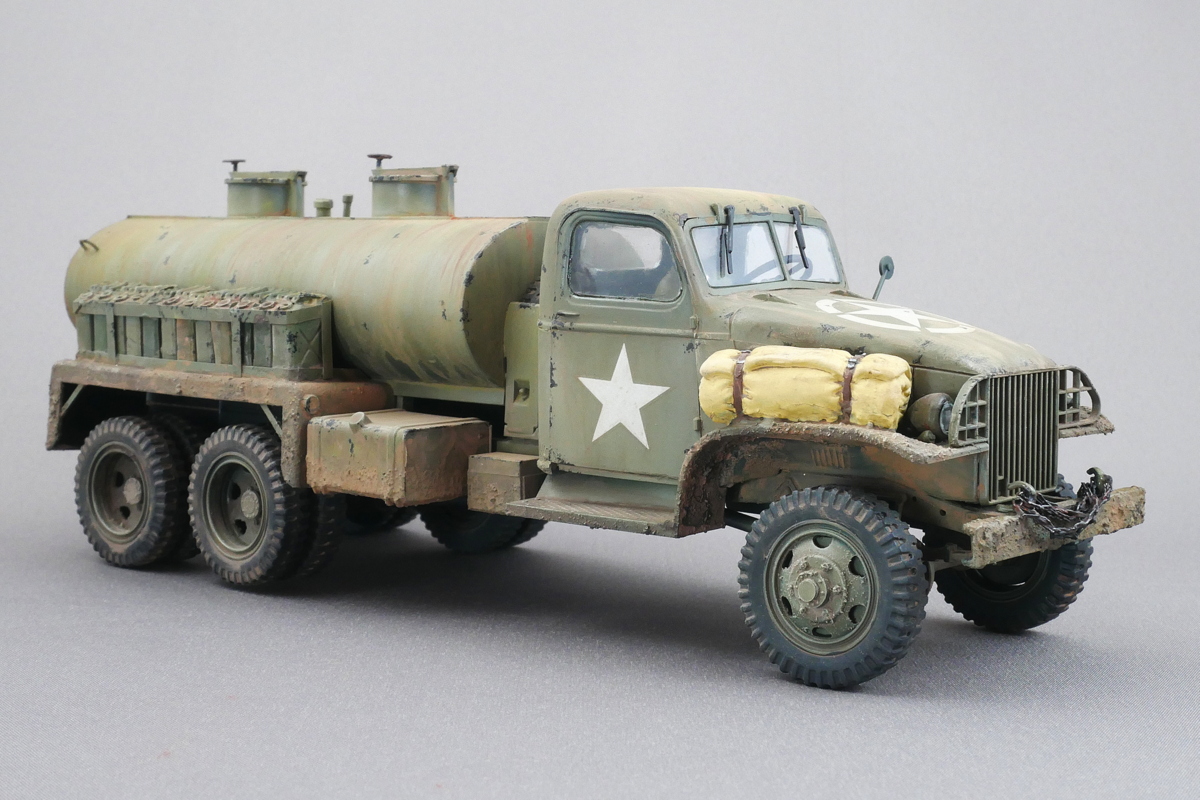 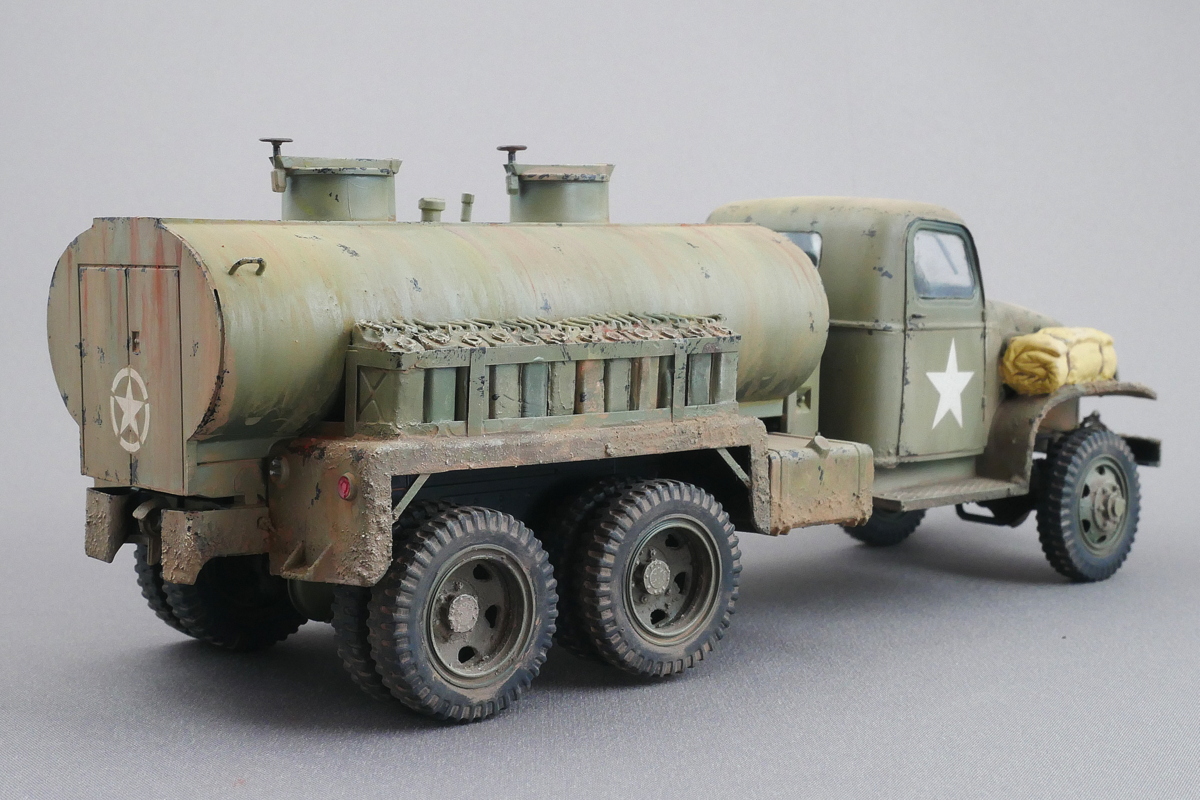 I didn’t have a plastic plate with the right thickness for the Jelly can rack, so I used a thin plastic sheet. It was easier to make if it was a little thicker. 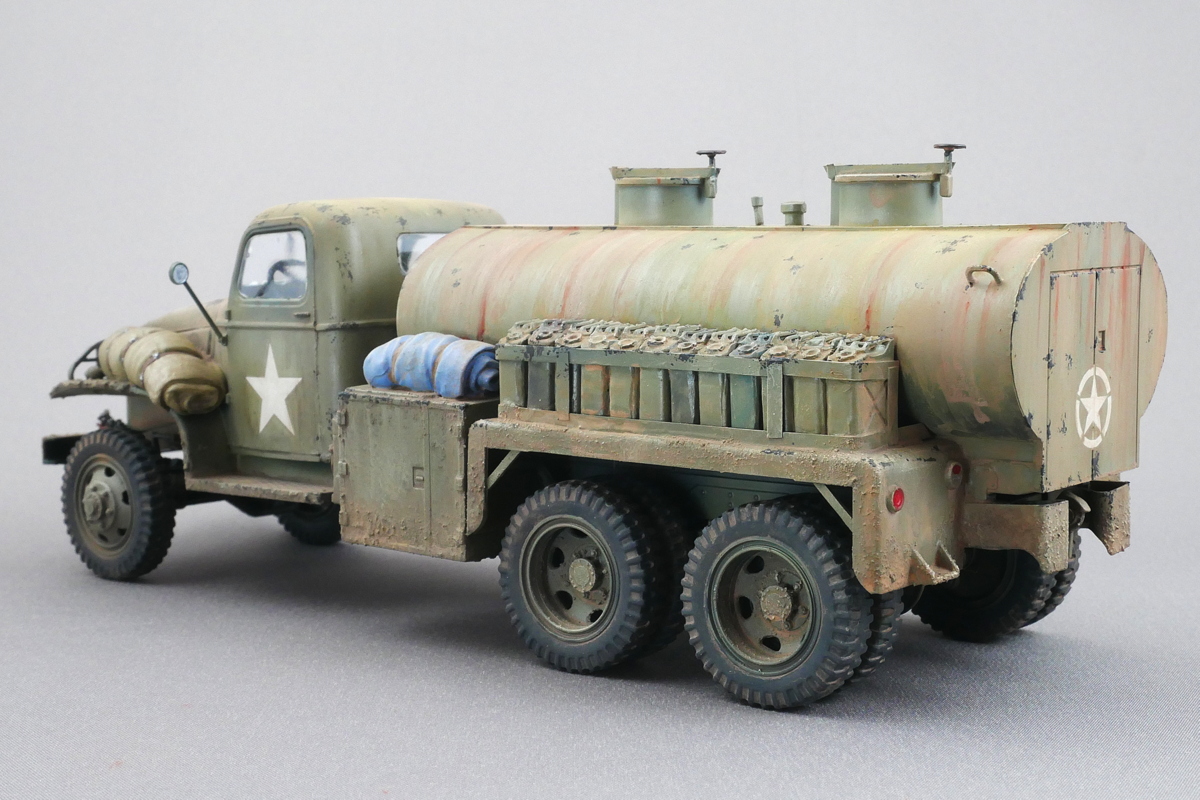 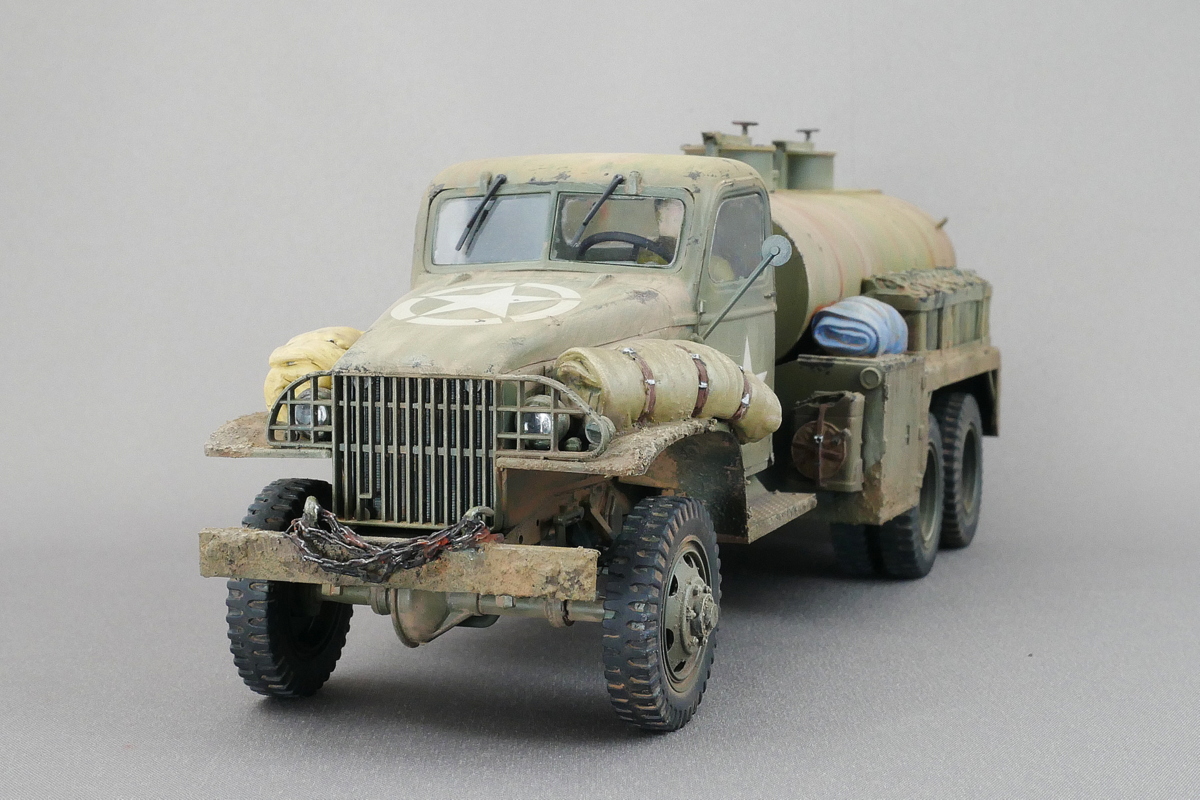 Since the basic coating is monotonous, I did a lot of irregular weathering such as marks of raindrops. These vehicles tend to be overused in the back of the frontline, so the hard weathering might not have been an exaggeration. 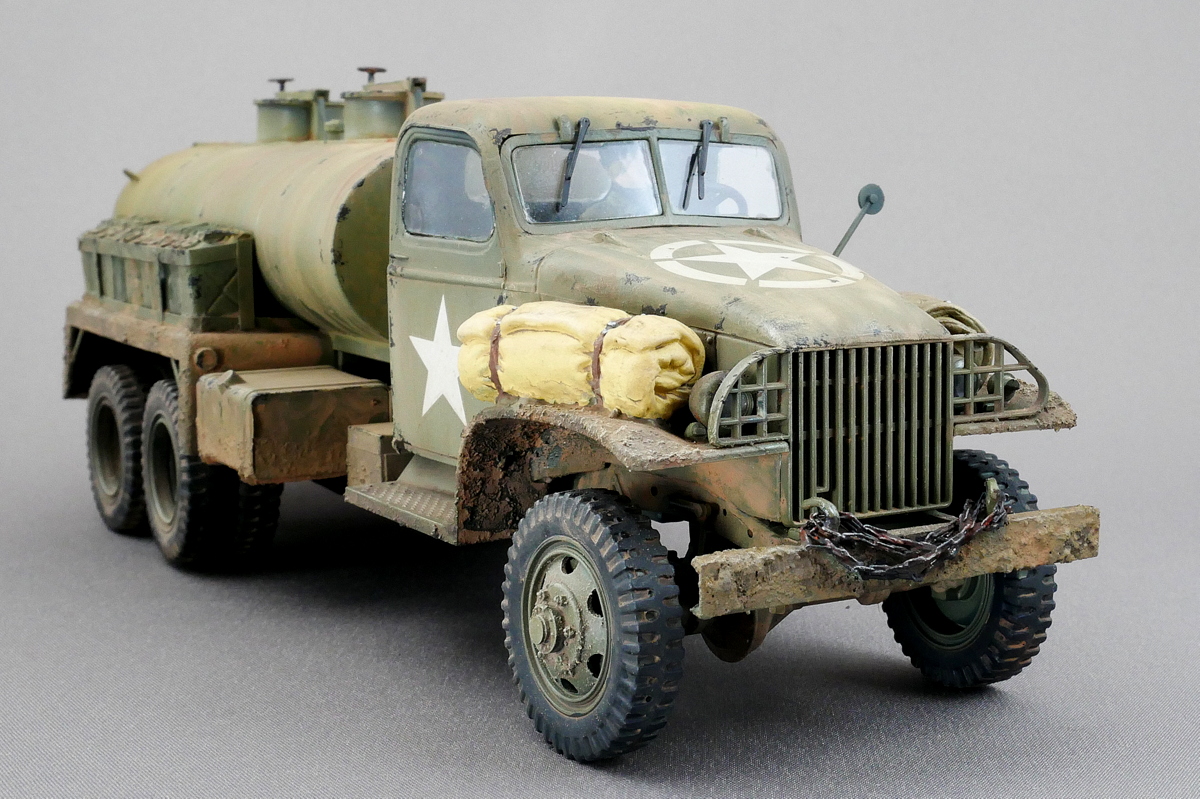 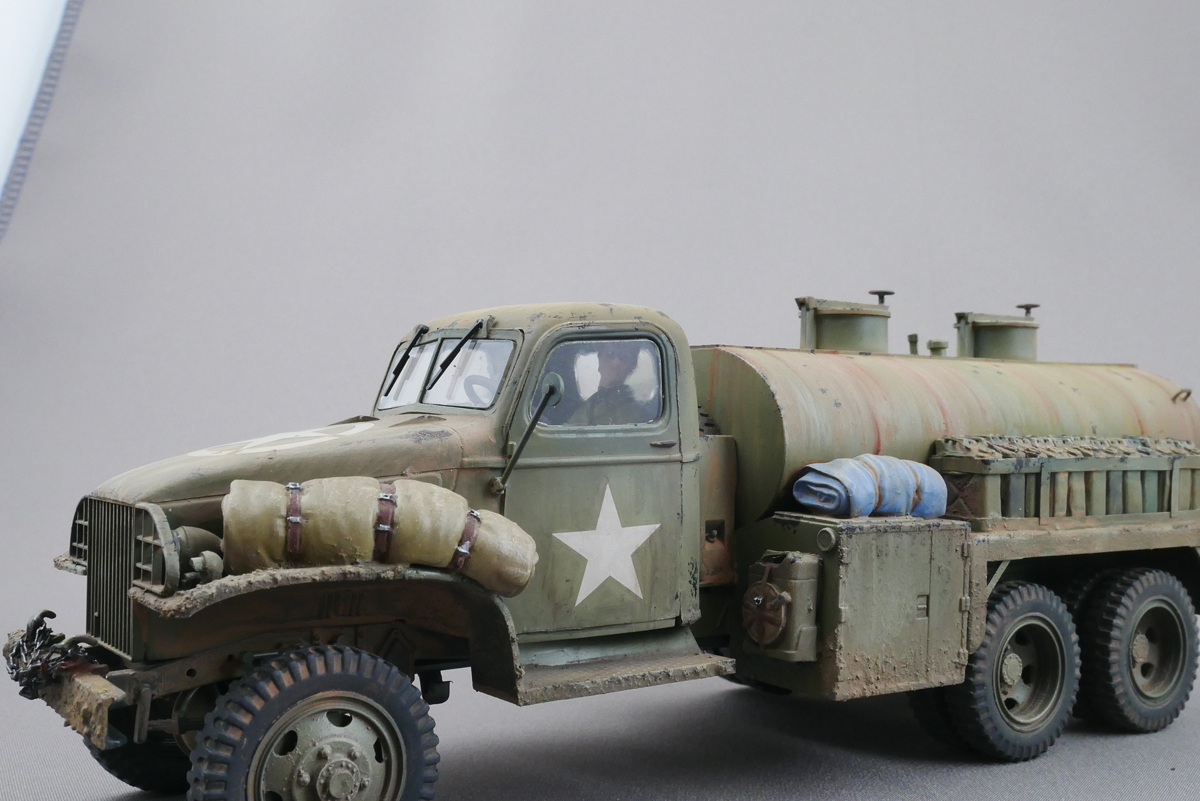 There was no mention of the inner painting, so it was painted with olive drab. I’ve forgotten what it was like to build an Italeri WWII US truck before. I put a figure on it this time, so I simply painted the inside. Vallejo, Model color olive green might be OK. Then, not only the inside painting but also the driver that I tried hard to paint would not be seen if it was through the glass. 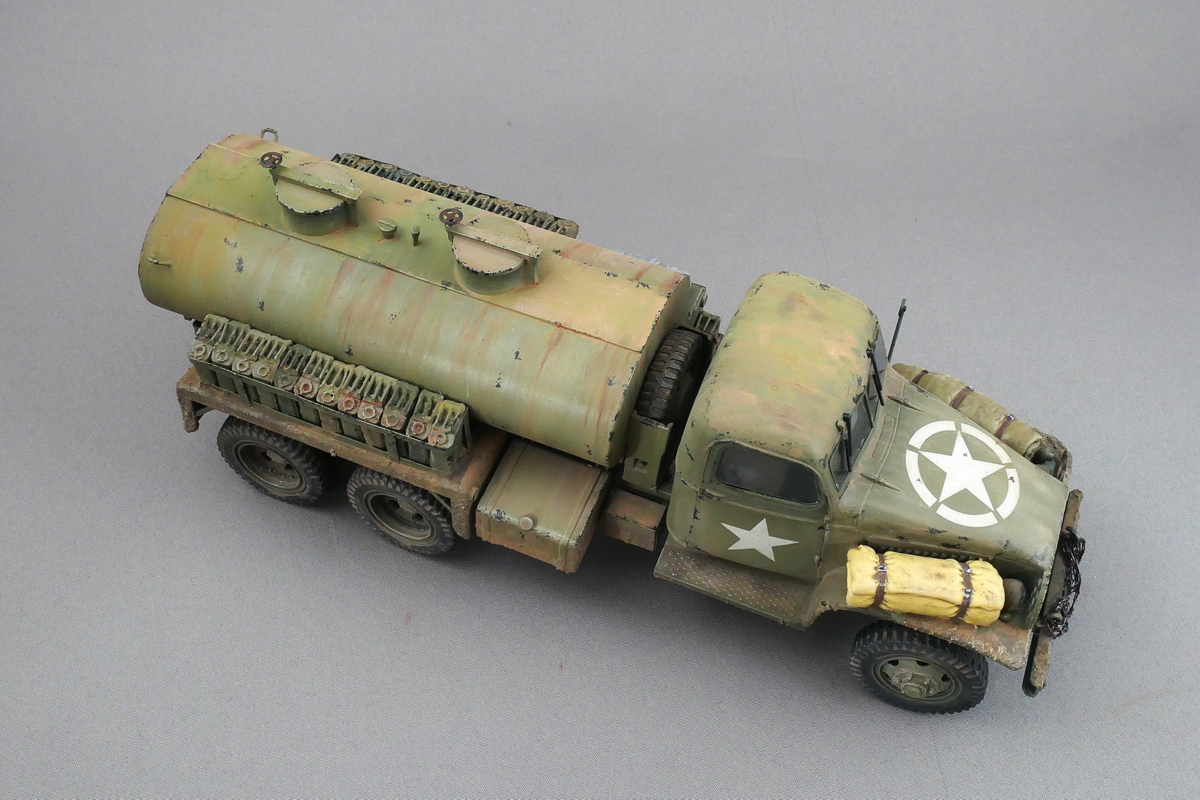 I think one of the reasons why they gave up the work is that it is troublesome to paint the inside of the driver’s seat. If I move my airbrush and brush a little bit, it’s nothing serious. 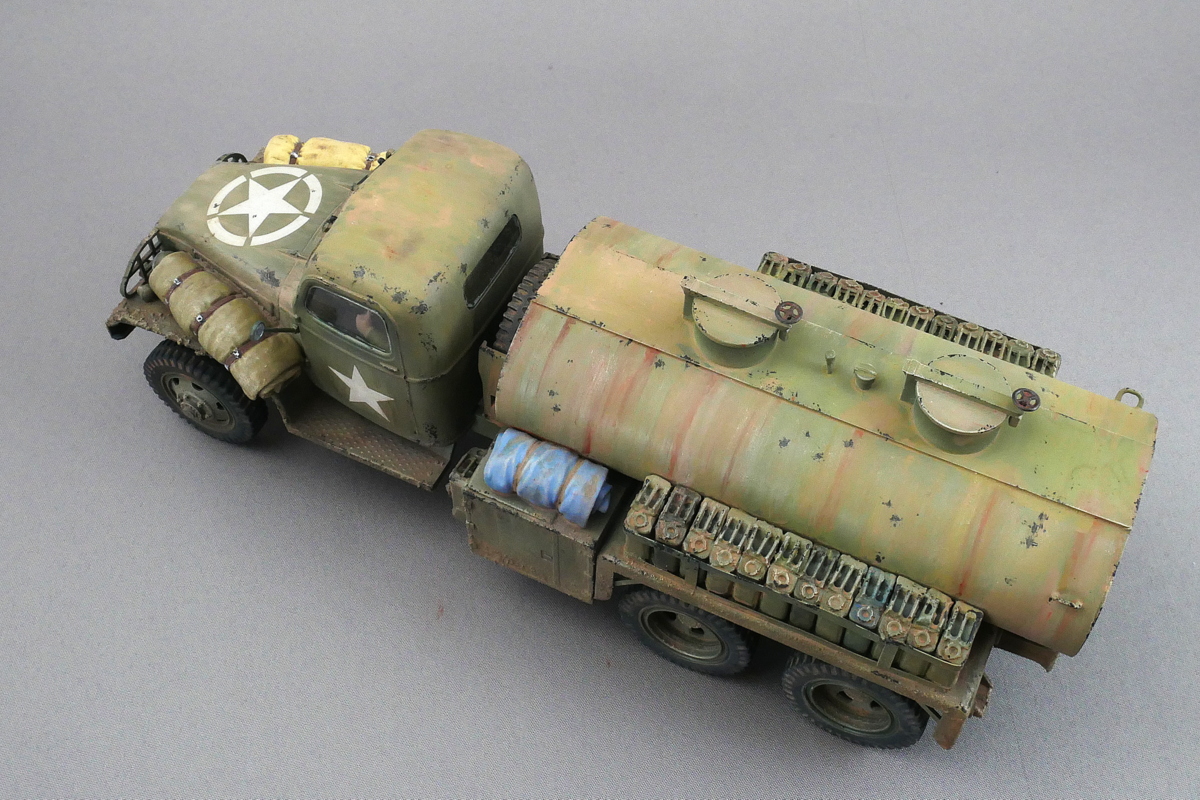 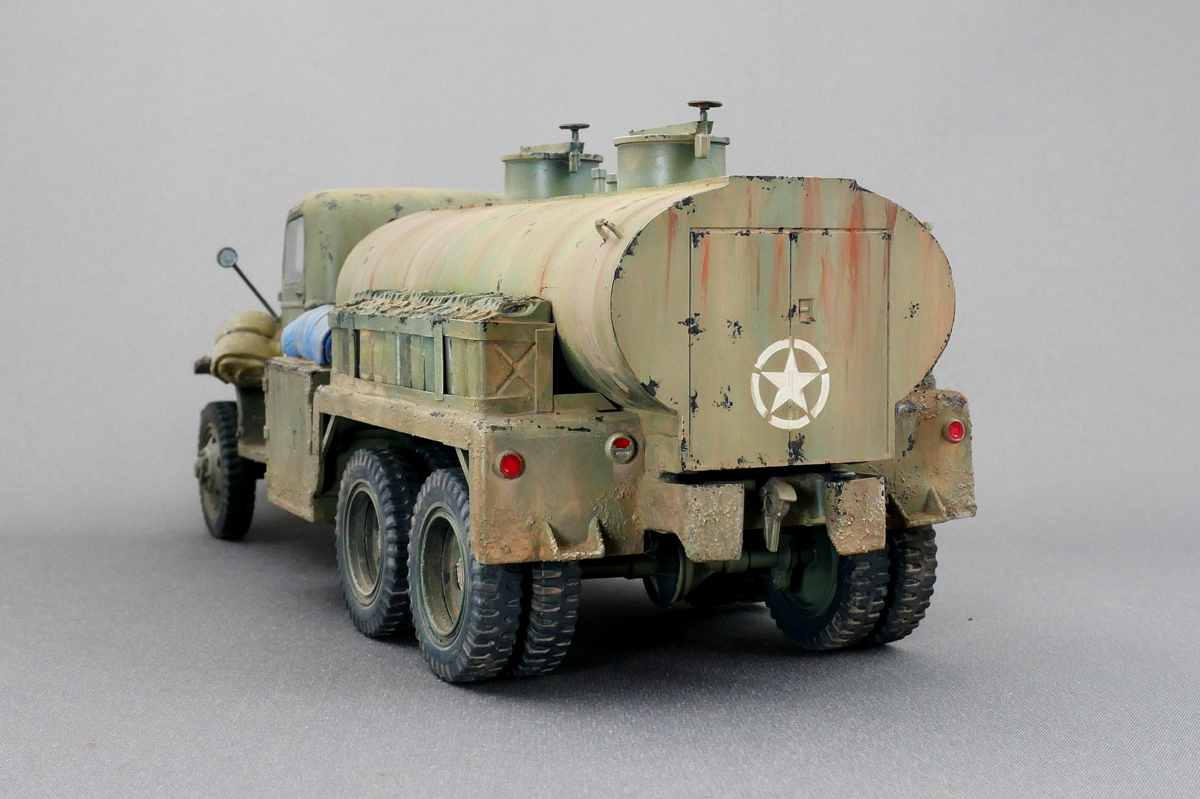 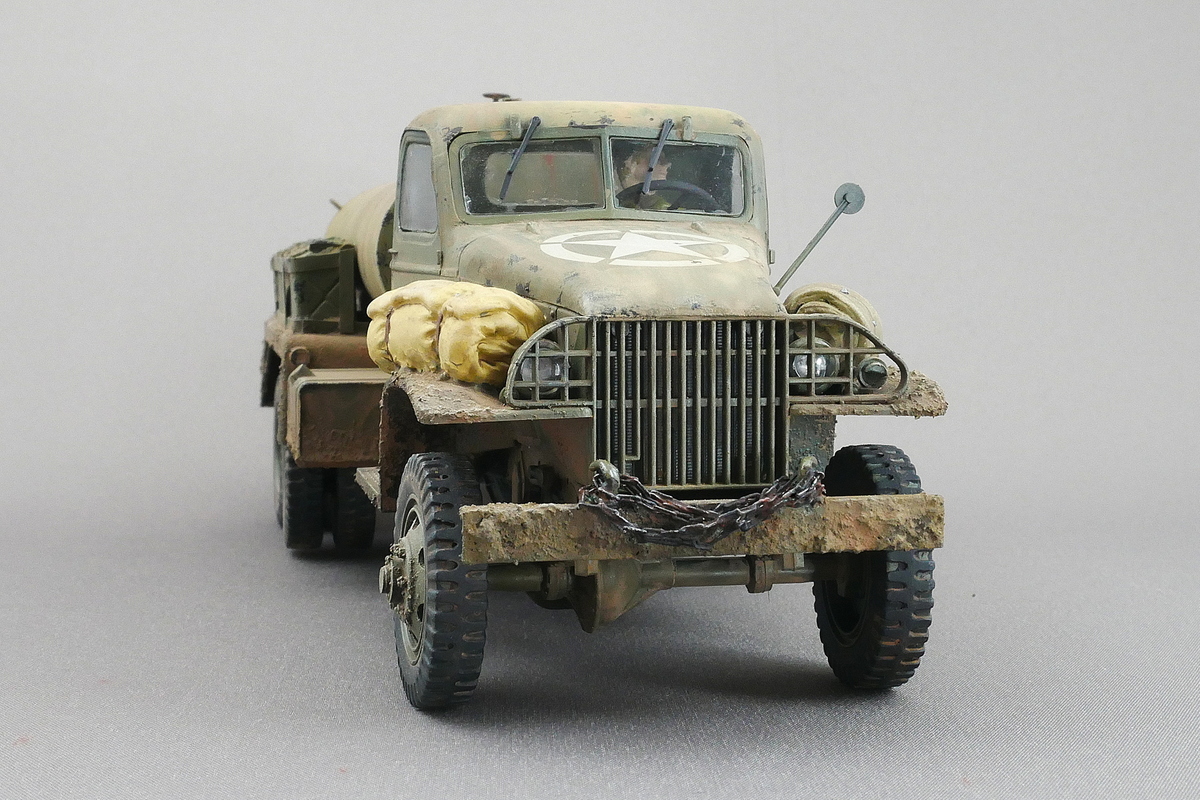 It is an old kit, but I managed to complete it. It’s been about a year since I started. It is one of the logistic support vehicles that support the U.S. Army. It is an indispensable vehicle for ground troops.
(2021/09/15)

It is an AFV Club M41A3 Walker Bulldog light tank. Most of the tank plastic models of AFV Club have belt-type footwear, so this time I used a combination track kit of the same manufacturer. It's a light tank but surprisingly big.

Hobby boss AAVP-7A1, Seadragon. To put it more simply, it's a U.S. Marine amphibious assault vehicle. I had a hard time assembling the footwear, but overall it was big and powerful, and I enjoyed it.

This Dragon Abrams Tank was made for the first time since I opened my website. There were some parts that didn't work well such as washing and dry brush. Plastic models of tanks have many parts.

Dragon's M4A1 Sherman. Judging from the package, it seems to be an old kit. It is quite rare for a U.S. tank to have a combination track included in its kit. The marking of this tank is the 1st co., 2nd battalion, 67th Armored Regiment, 2nd Armored Division in Sicily, July 1943.

It is an AFV club Striker kit. The US Army's most advanced armored car. I like this kit because the mold is tight. There was mold in the rubber tire. I did too much weathering.

Asuka's Sherman Easy Eight. The marking this time is the 8th Armored Division, deployed in Kirchhellen, Germany in March 1945. This time, I wanted to mark the front with a star inside the circle, so I chose this marking in this kit.
スポンサーリンク
Jagdpanther Ausf.G1 Sd.Kfz.173 Meng Model 1/35 (add more weathering)
U.S. Army Female Soldier Figures Medic and Nurse 1/35