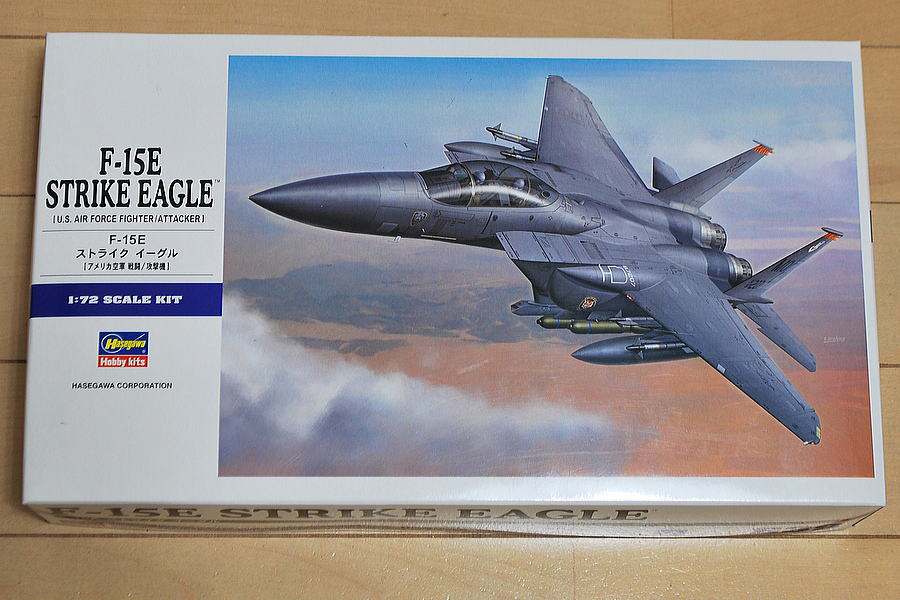 I play flight shooting games occasionally, and now I’m interested in jet fighters recently. Speaking of the lead status of the jet fighter, I think it’s an F-15 and have begun to touch this kit. I wondered whether the 1/72 scale suited the beginner and chose this Hasegawa kit. It’s straightforward to pick up in Japan. 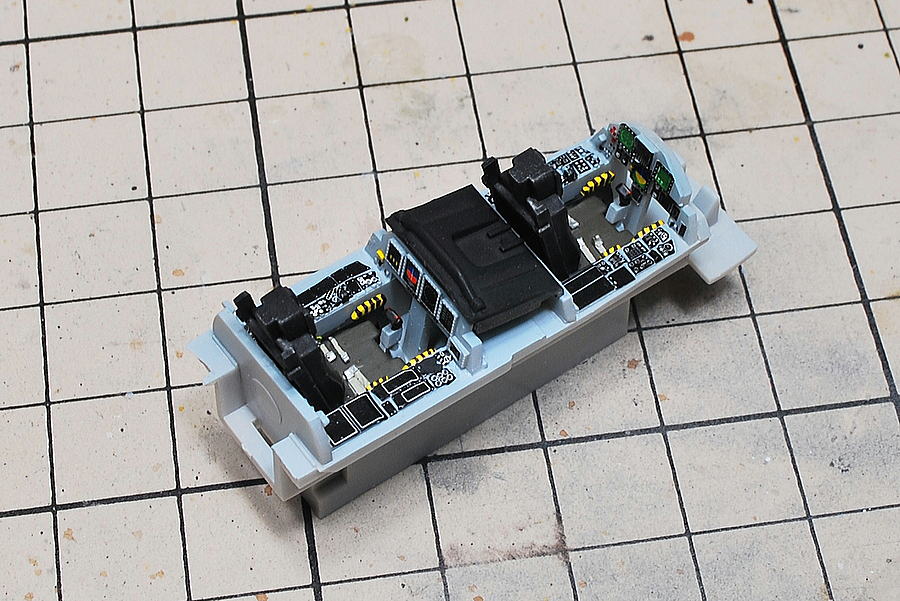 It is a double-seat-type cockpit. The instruction manual indicates that sharpen molds before attaching decals or paint on these molds remaining. I remain molds and attached decals with a softer decal; it’s the best, easy, and most realistic. Additional light detail up, I made seat belts from board weight, and I painted emergency levers. 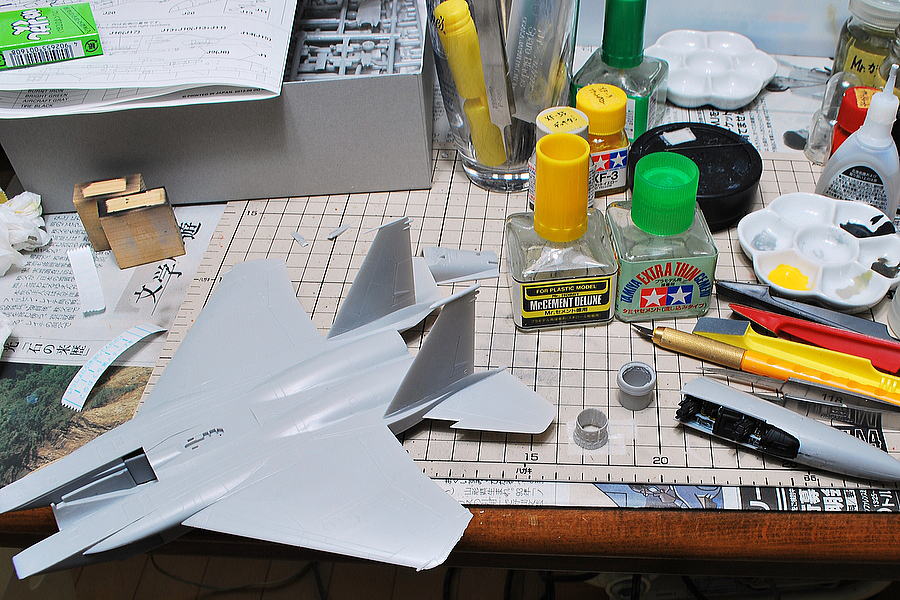 By the way, the jet engine nozzle was divided into many parts and was difficult to assemble. I’m anxious to build till I finish up without the imagination of combining many unfamiliar parts. I may throw it on the way and close this page in case of failure… 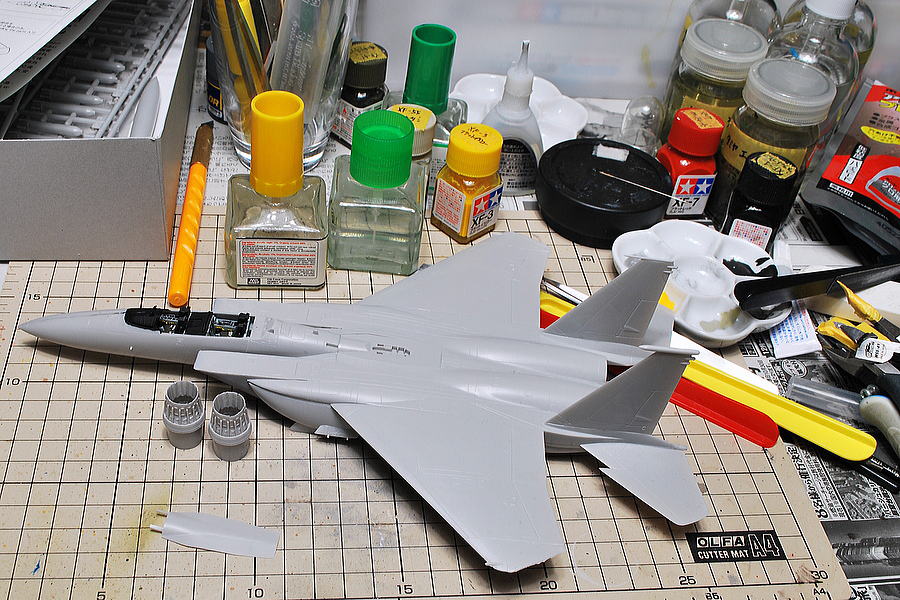 This body looks like the lump of two big jet engines and a tiny cockpit in a small space; it’s an image of a beginner’s outlook. Wings virtually grow from the engines. I understand the situation this plane has over the supersonic speed. It is a terrible body, an excellent mechanism. 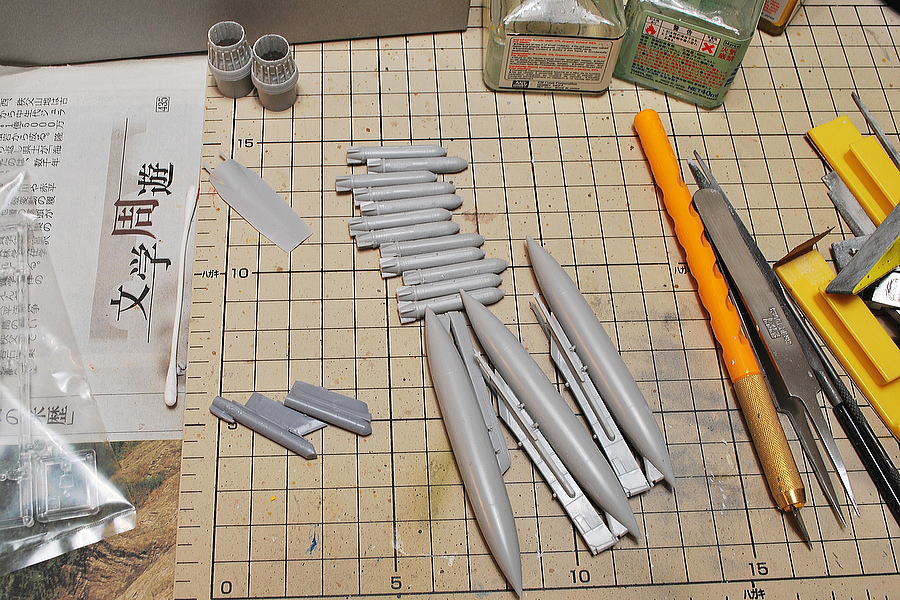 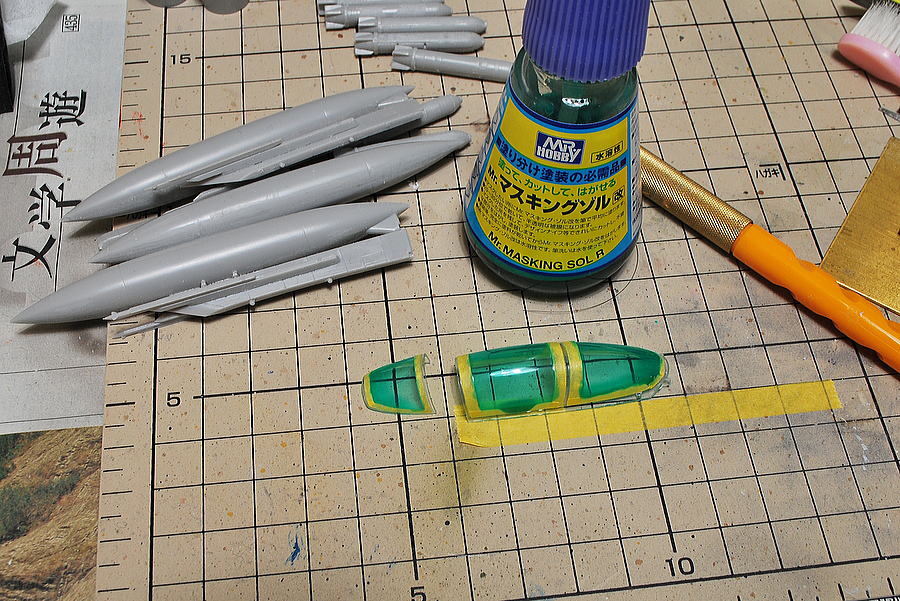 Canopy masking is easier than WWII planes. Is it a thrilling time when we peel off masking after painting?
(25-January-2015) 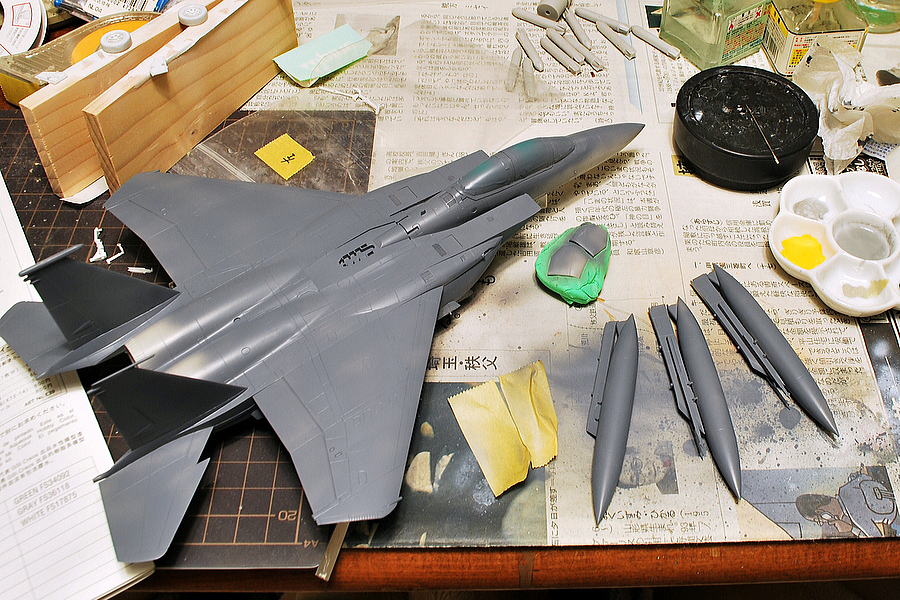 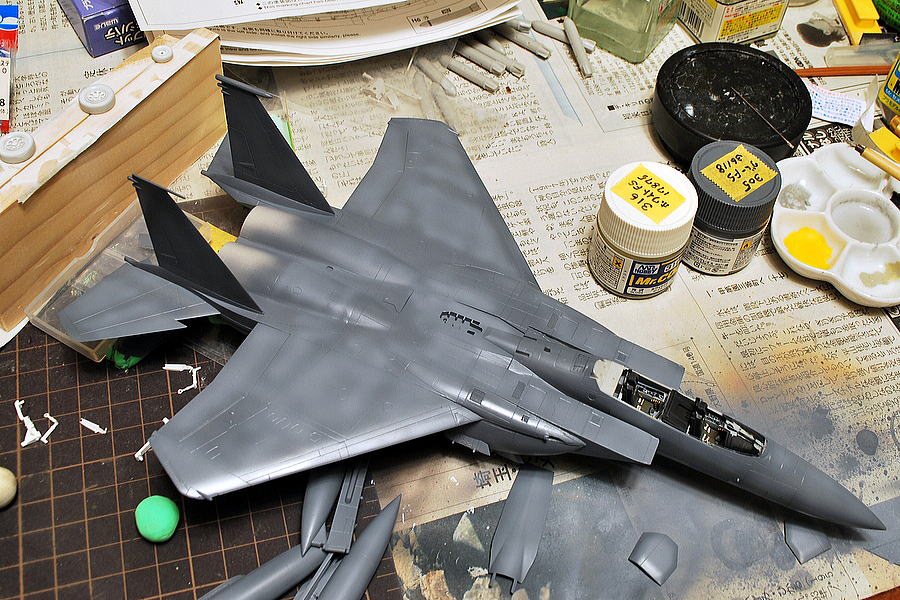 I gave fading expression on the light gray brighter than a former color. It’s perfect, as it’s my first time trying the shade effect. 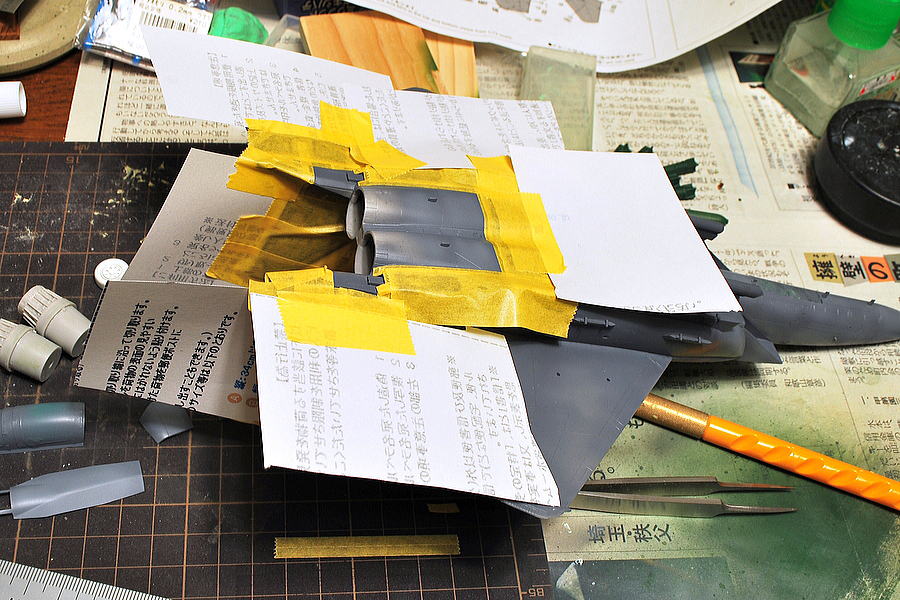 I masked it for the metal-colored painting of the jet engine part. It is quite a complex shape masking… 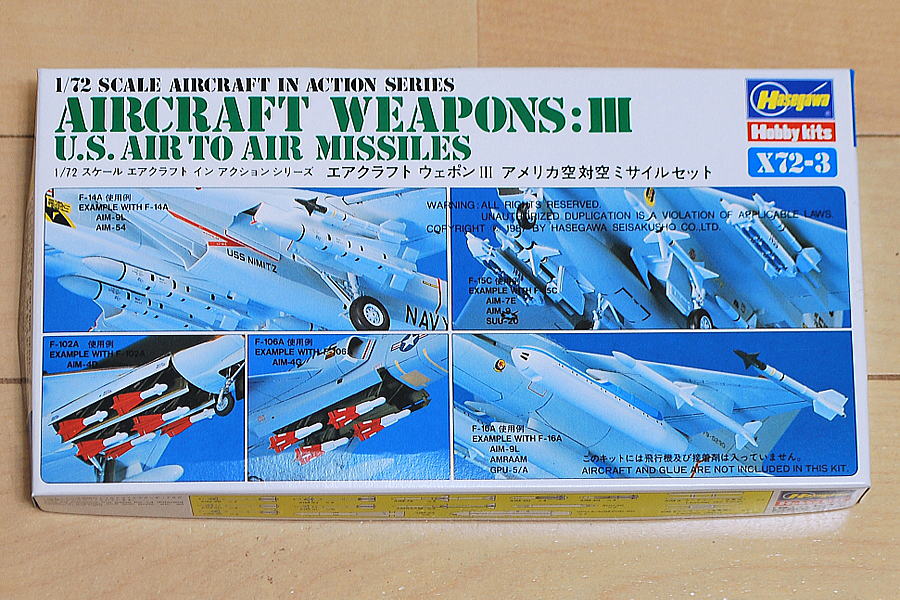 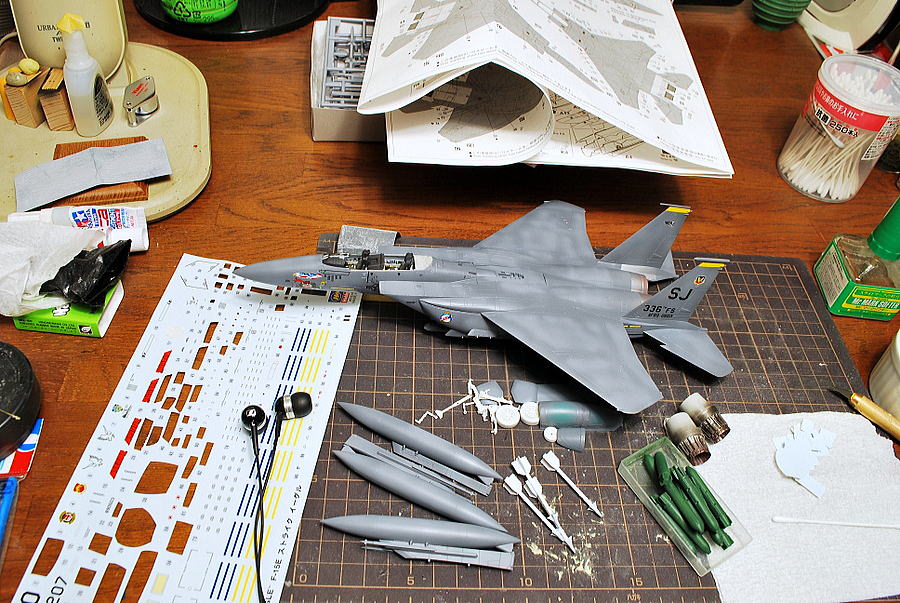 Because the rough painting was completed, I attached decals. There are lots of them, thirty times as many as tank model decals. Oh, as for the AFVs, weathering paint takes a lot of time.
(1-February-2015) 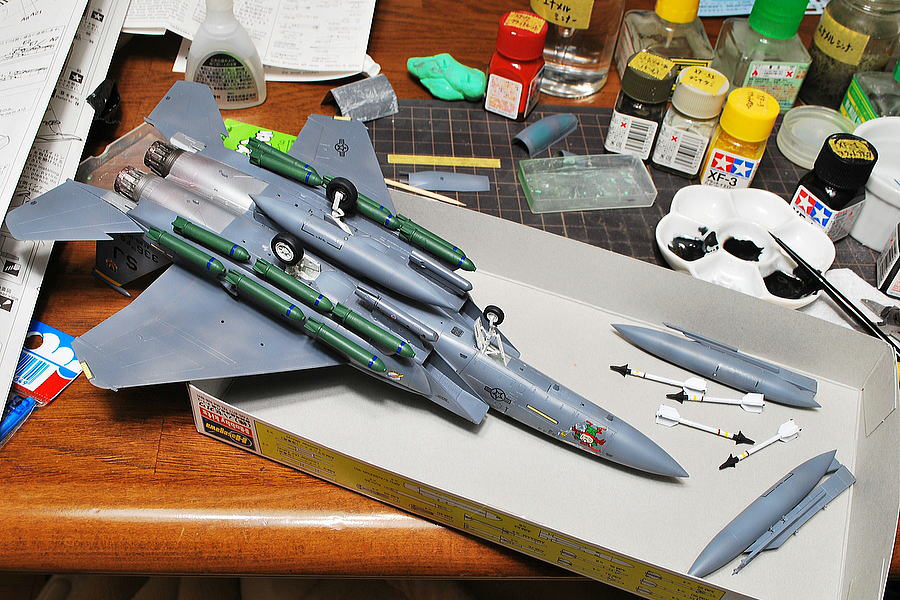 It’s almost completed. It’s hard to attach many small decals, cluster bombs, and Sidewinders. I suppose the blue lines are means for drilling, and yellows are live ammunition.
(5-February-2015) 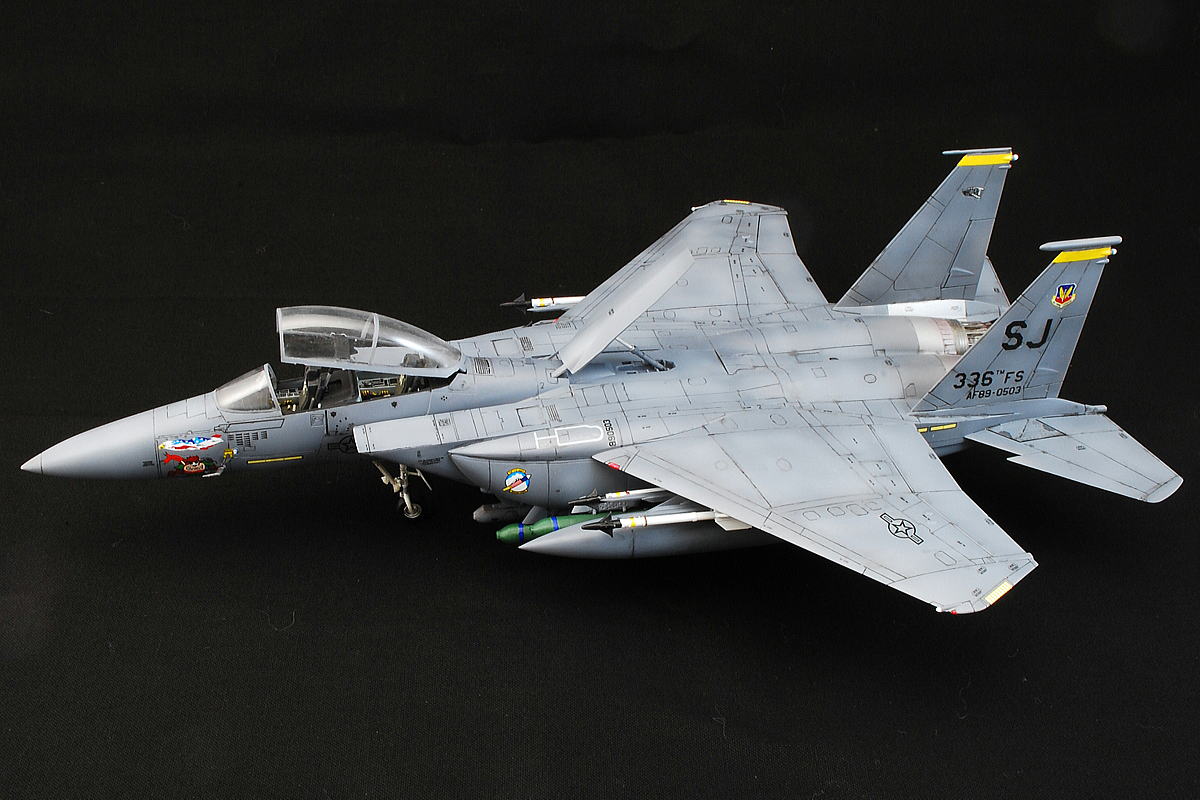 F-15E is a world-famous multi-role fighter. Many people have heard the name “Eagles,” even though they are not modern fighter jet fans. This is Strike Eagle, and “Strike” is the meaning of the fighter that the ground attack is possible. 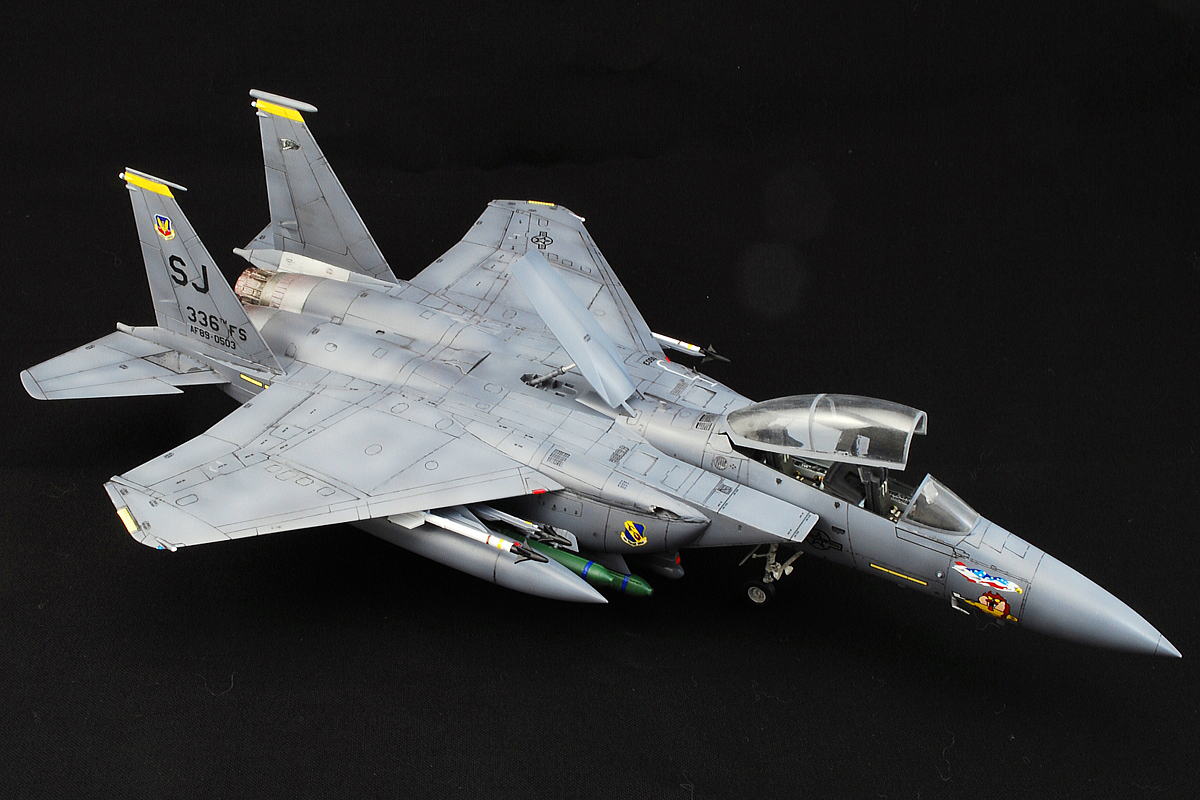 The maximum bomb load is 11 tons. I am amazed to learn that there is more than the maximum amount of 9 tons of the B-29 Superfortress. This fighter experienced the actual fighting of the Middle Eastern “Desert Storm,” the Kosovo conflict, and many other operations. 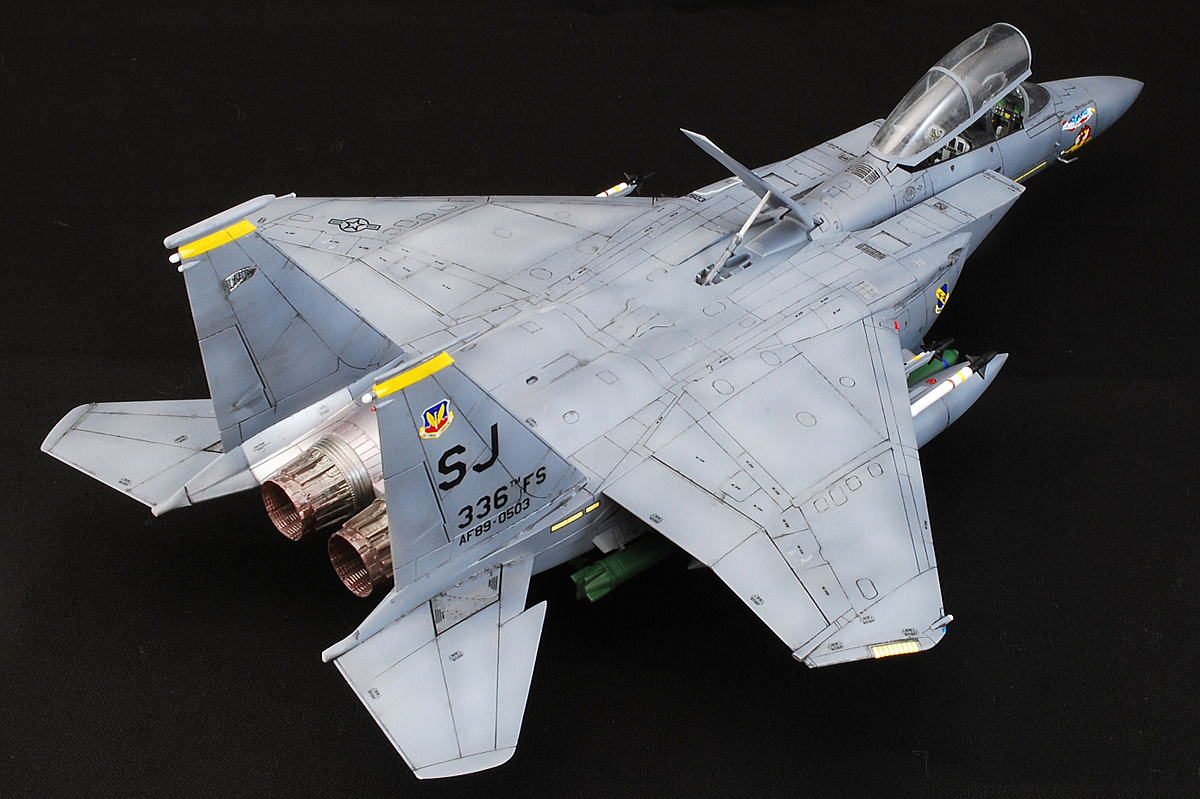 After having painted in a primary color, I sprayed slightly bright gray as a fading expression at random. Then, I put many decals and shading panel lines with washing. 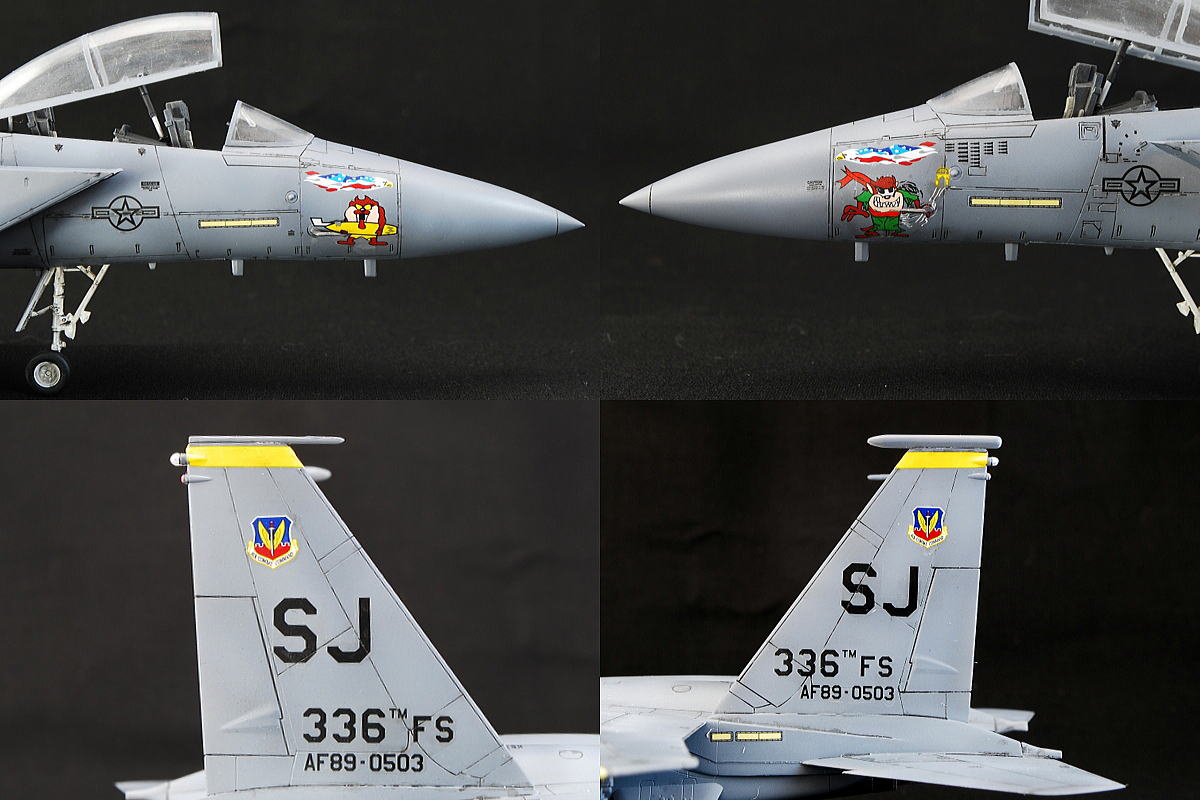 It is not a fantastic colored body, but various characters are marked on it. This marking is U.S. Air Force, 4th FW, 336th FS, ROCKETEERS (SJ336FS). 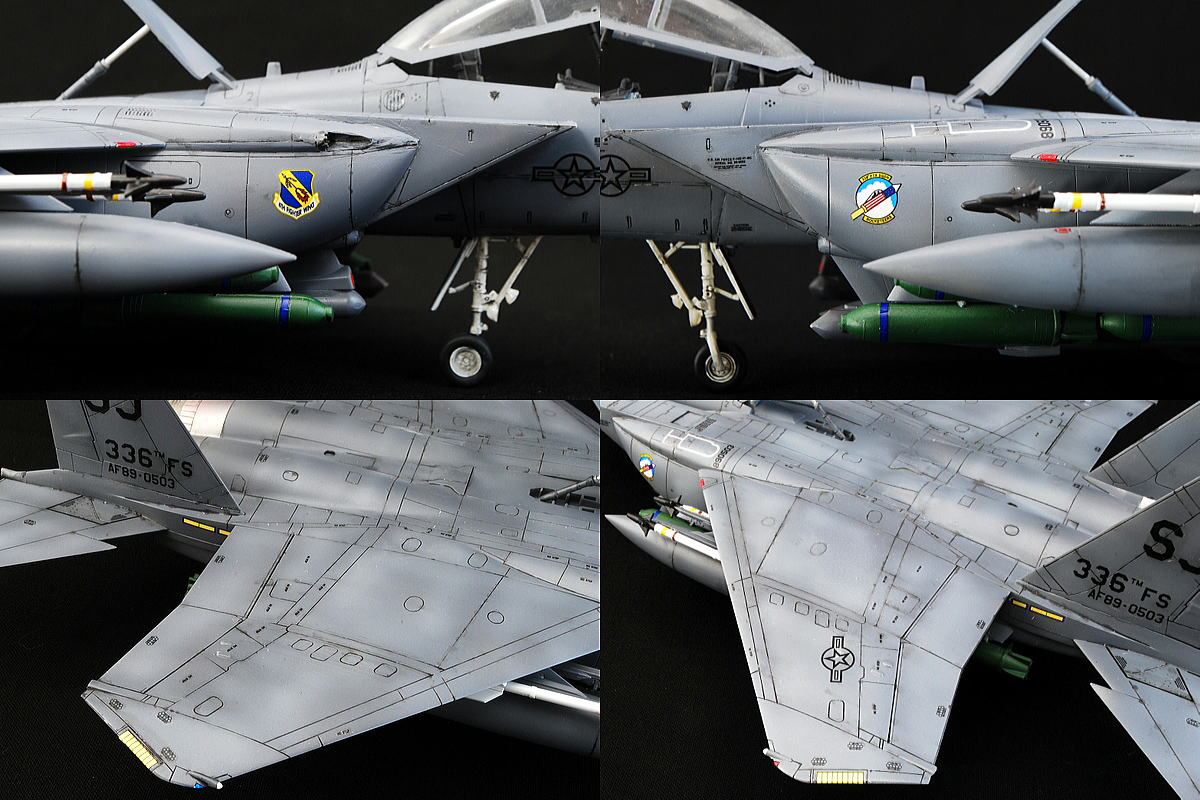 The “Wing” is a unit of strategy and tactics, and under the Wing is a “Group”; under the Group is a “Squadron.” I could imagine the U.S. Air force’s tremendous military power that Air Wings are several hundred deployed worldwide. 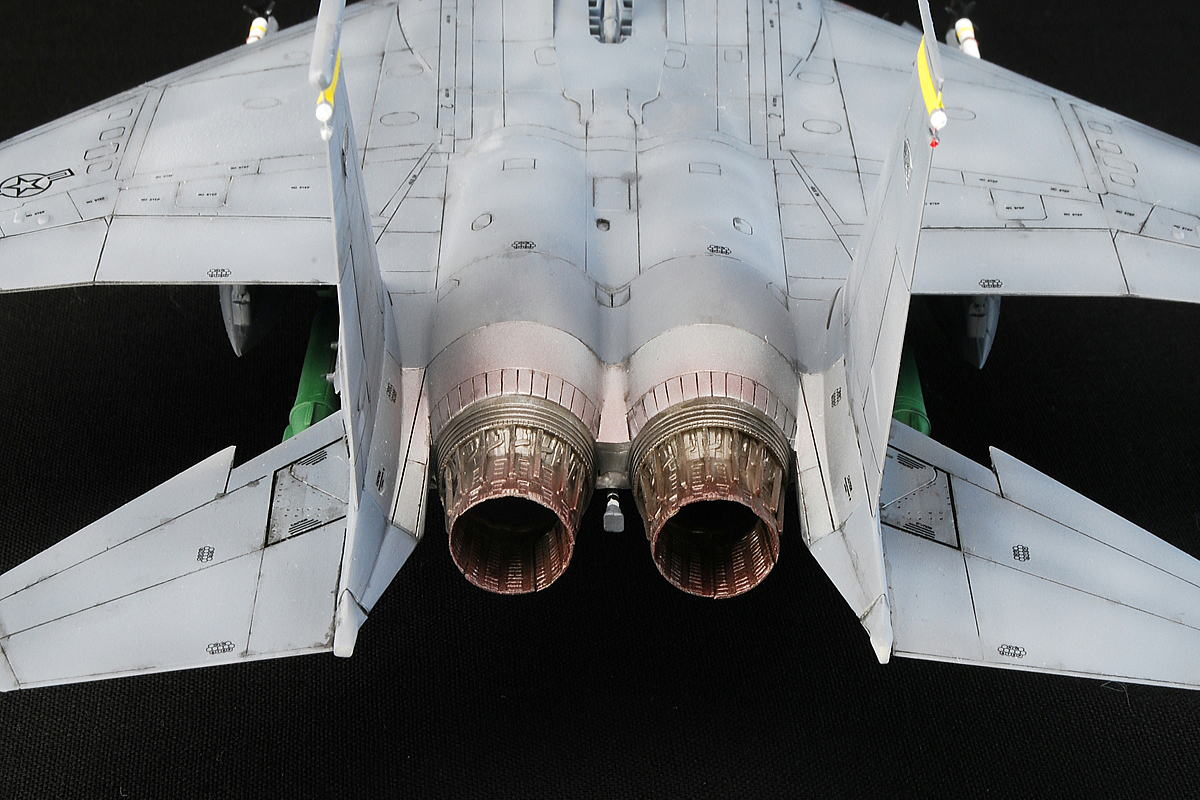 It wasn’t easy to make the engine perfect circle by assembling it. I painted these engines with gradation with some colors. 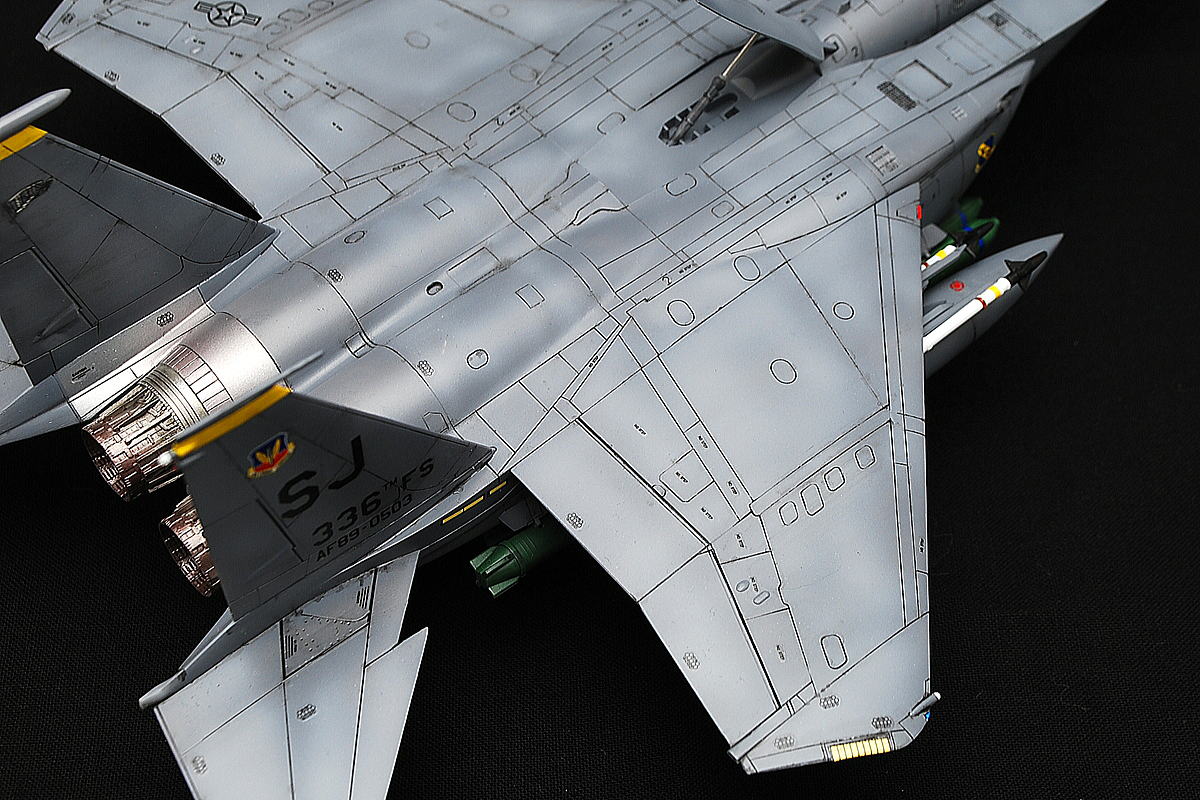 Considering the airflow in operation, I did the washing effect backward. 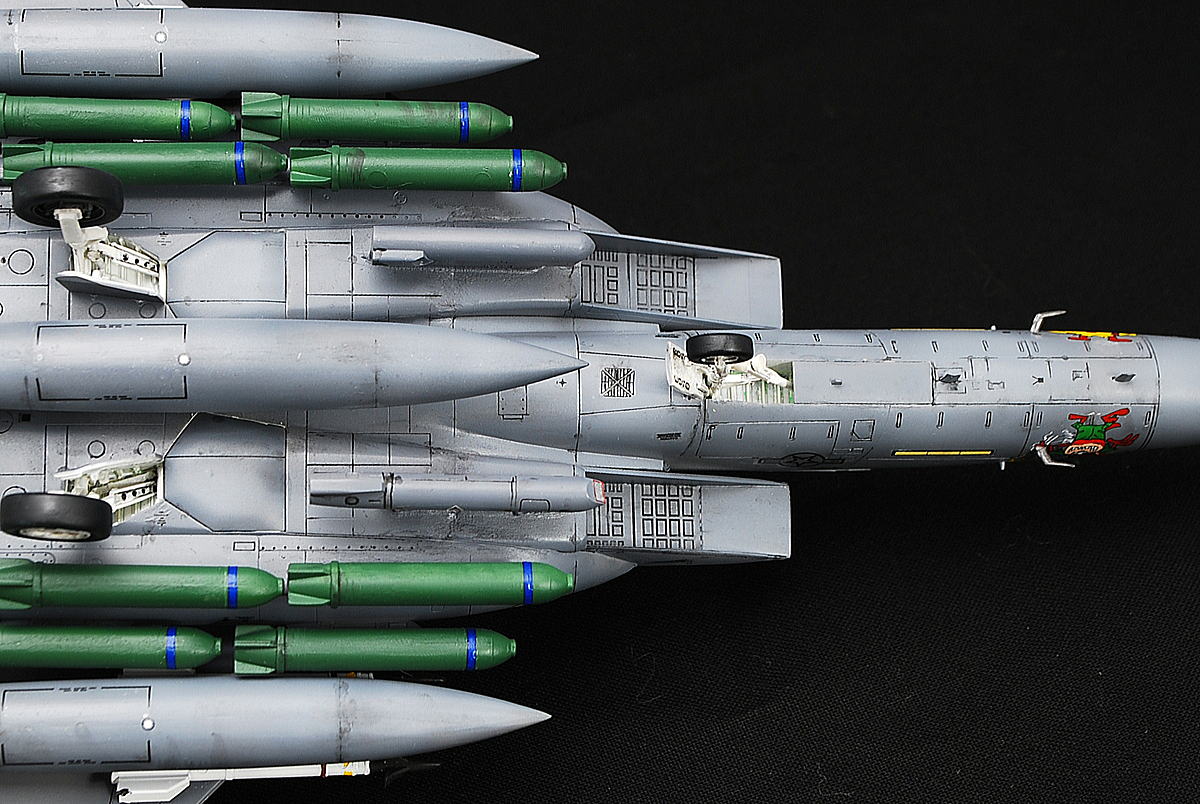 Because I needed to get some adjusting undersurface when I attached Sniper advanced targeting pod AAQ-33 and navigation pod AAQ-13, I have attached them before painting. I did not work well assembling.
After using the kneaded eraser with the masking of the landing gear compartment, it seems to become hard sticking after leaving for a long time. It’s easier to cover the compartment if closing a cover when I spray. 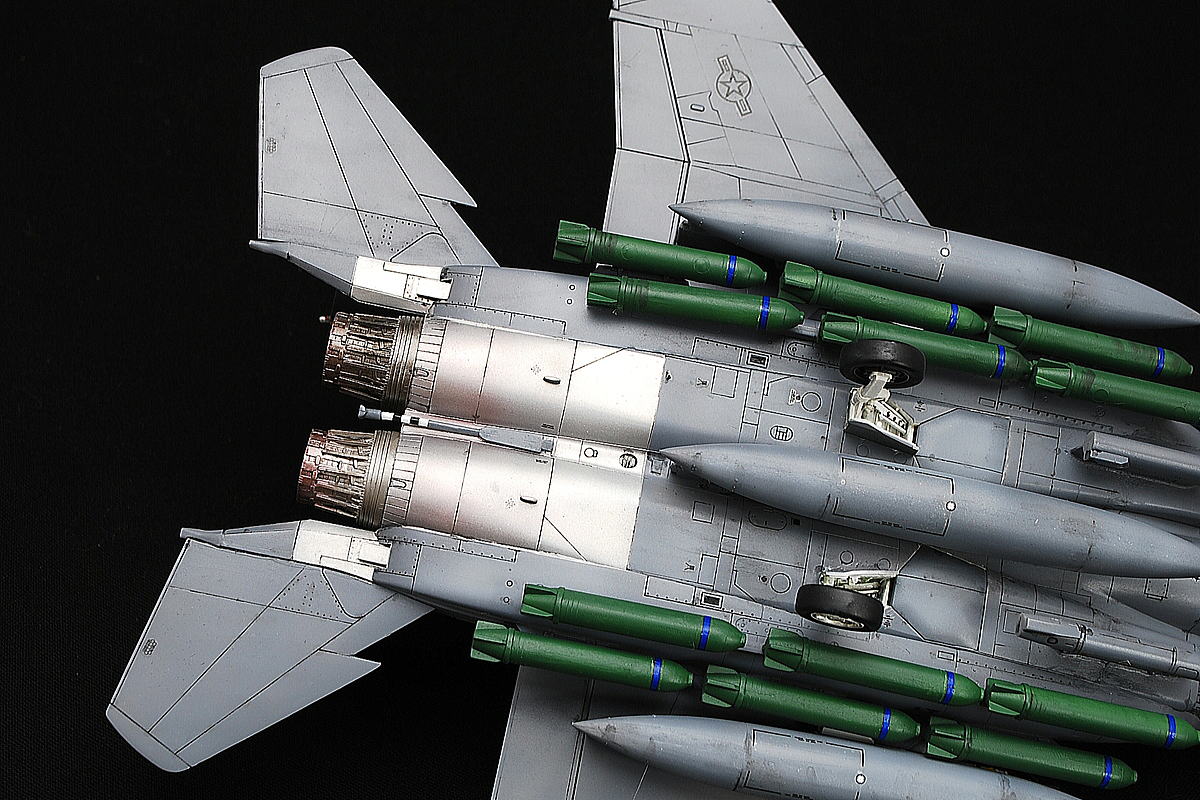 I suppose the bomb and missile line decals are difficult to attach neatly. In that case, I could have the option to use masking and airbrush painting. 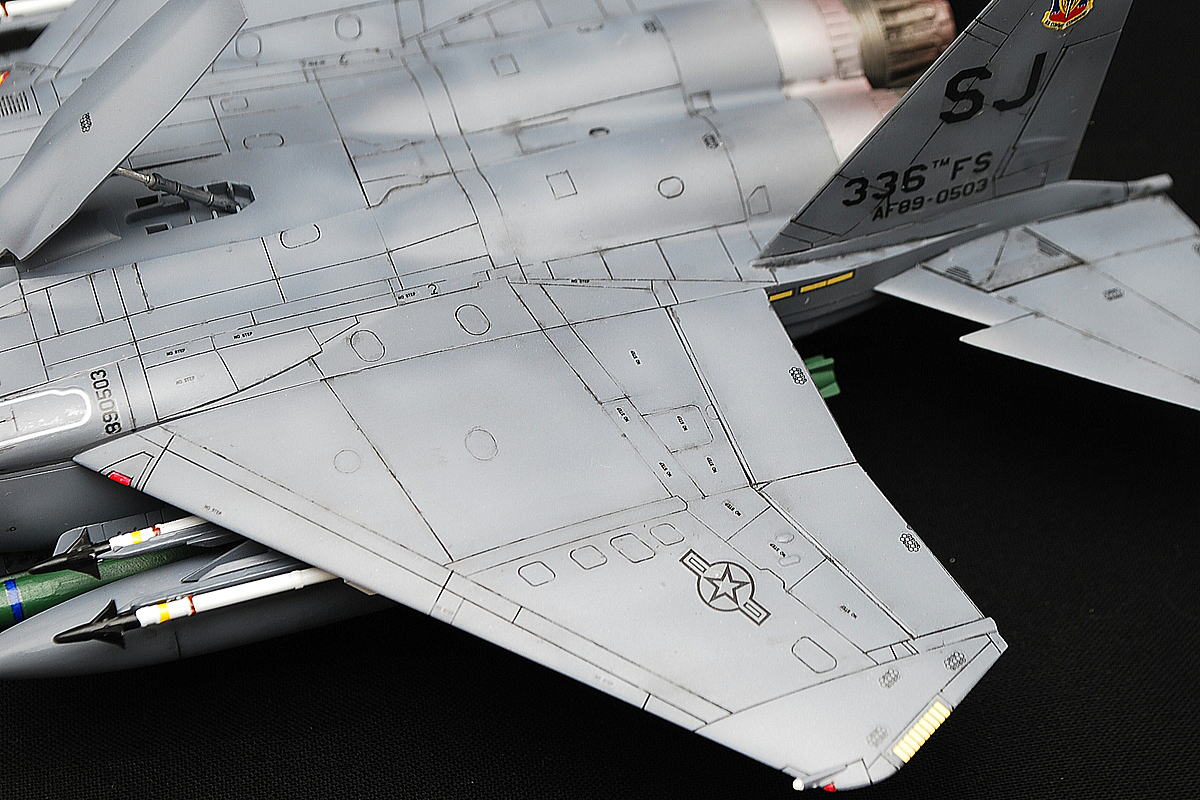 I feel the body’s appearance is more realistic after weathering in the panel lines. Mold lines should have been recarved the slight part. 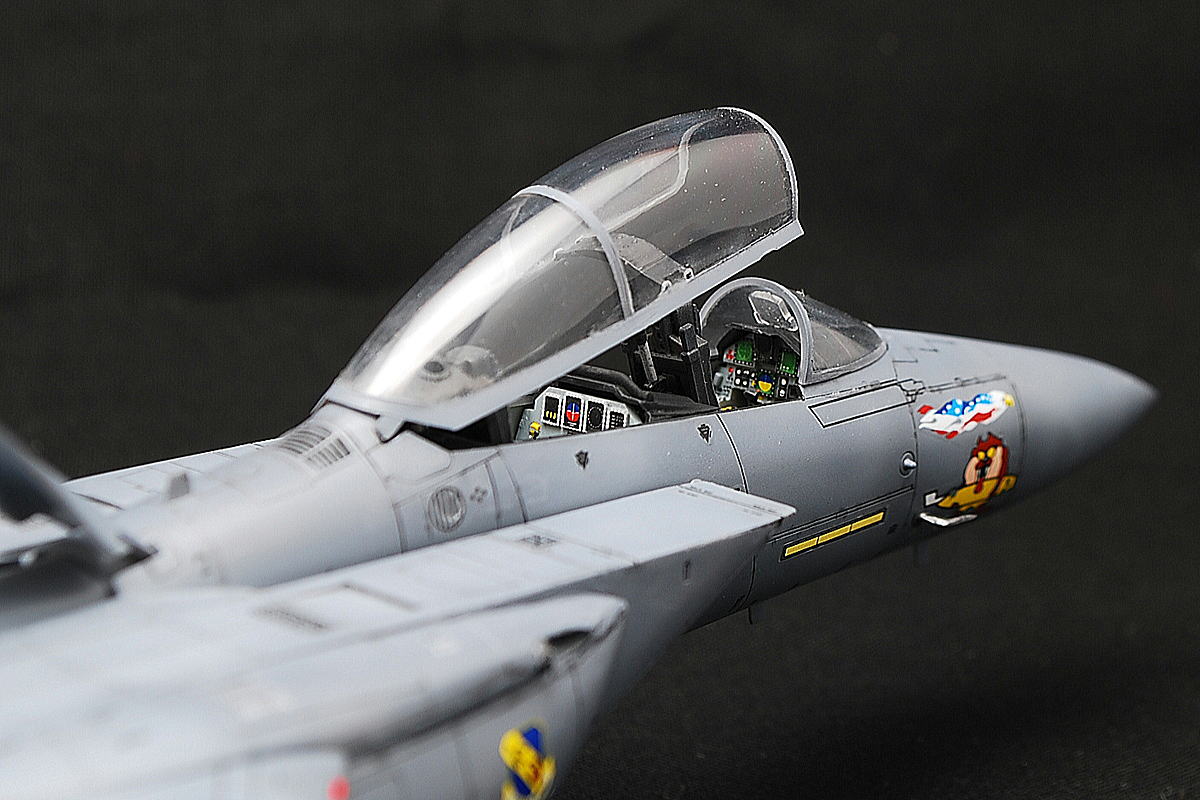 A real-thing-like atmosphere in the cockpit despite being 1/72. I polished the canopy much, but dust stands out in this zoomed-up shot. 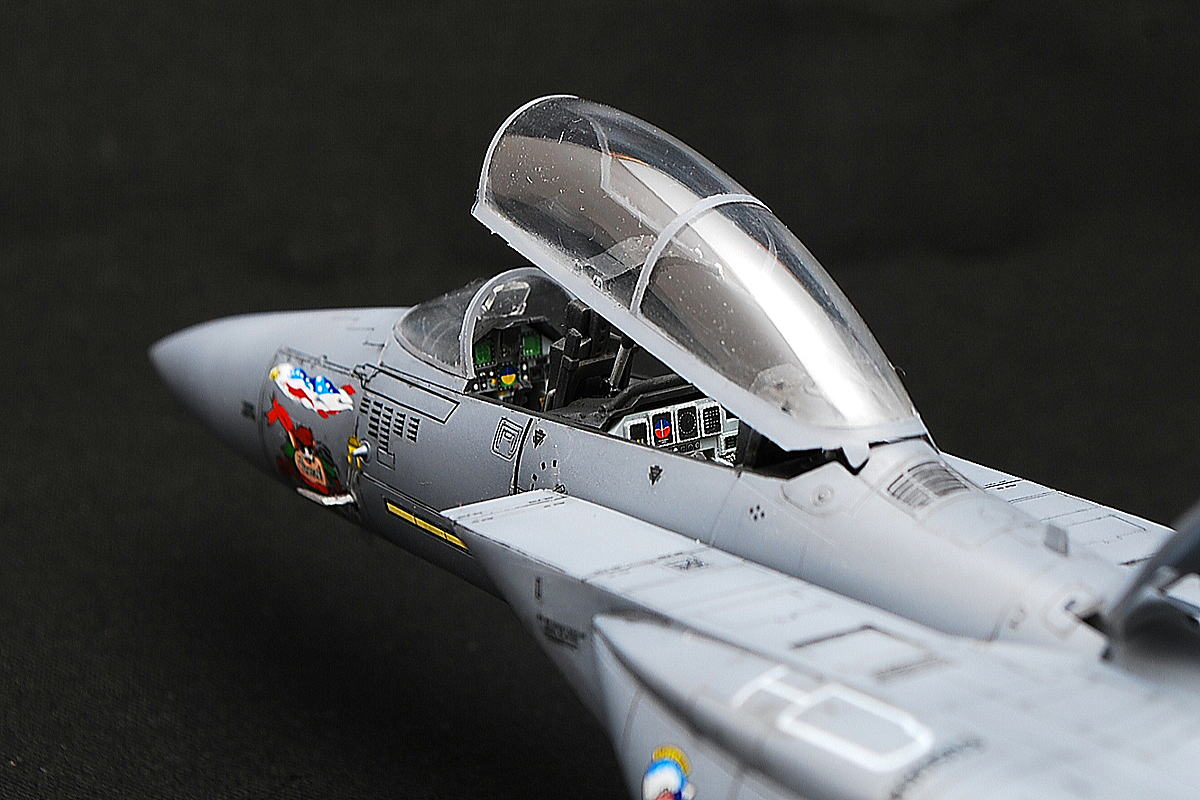 I opened a canopy and worried about strength. It’s fun to see the cockpit panel in various ways when I peep over. 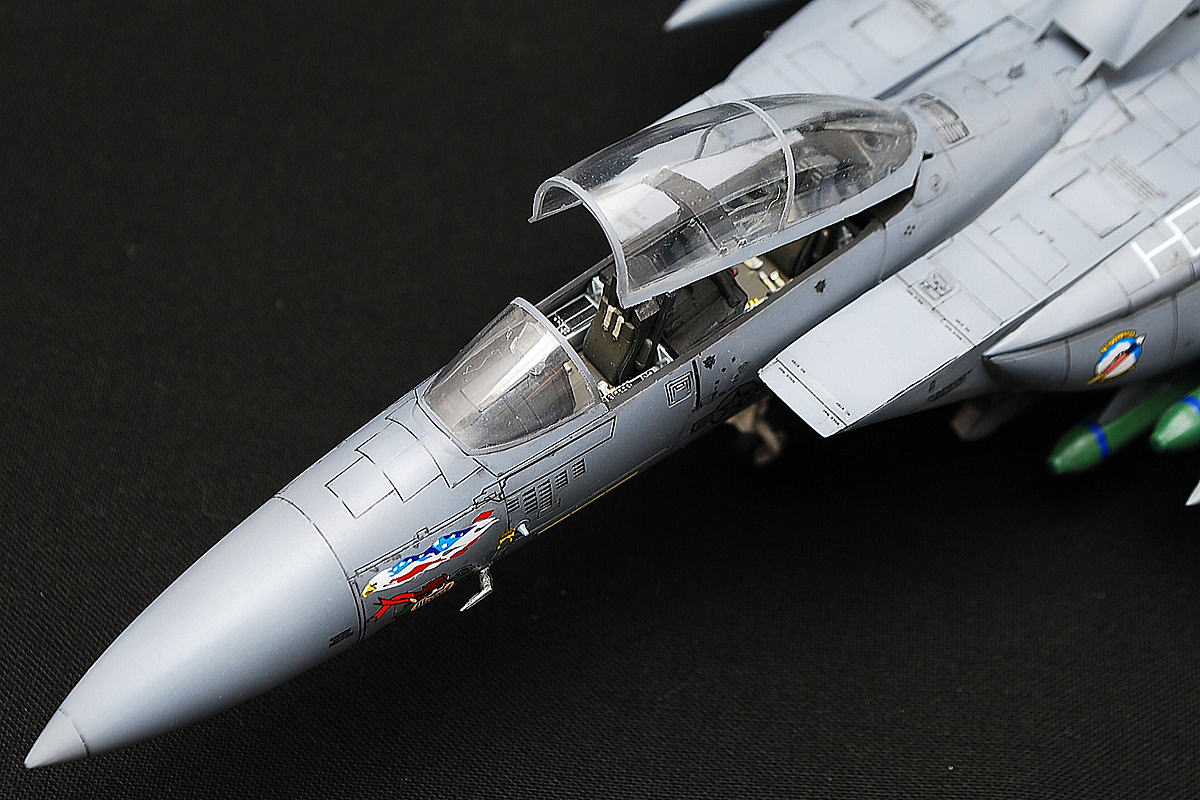 Shot from the front, I can see the seat strap by myself. 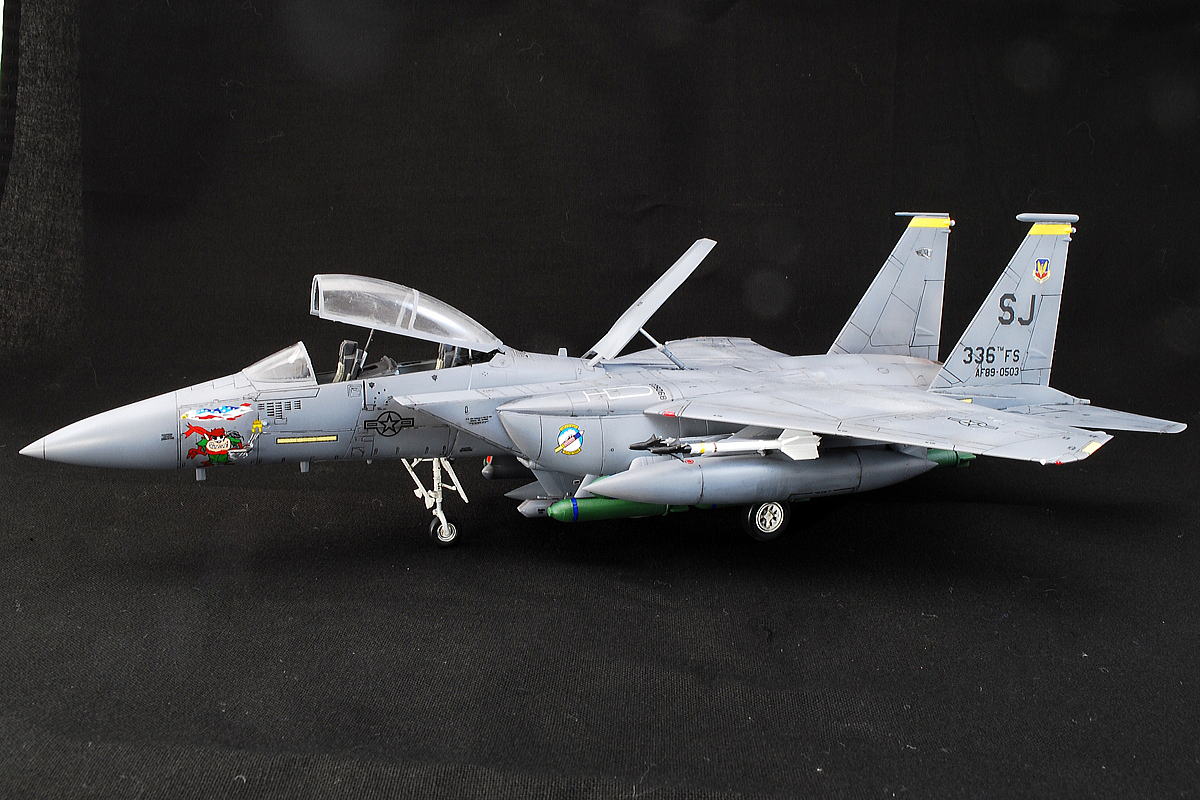 The additional armament was equipped with four sidewinders AIM-9L from aircraft weapon series three released by Hasegawa. It’s called a super sidewinder, and it’s a third-generation one. The performance of the infrared sensor improved, and the attack from all directions was enabled. 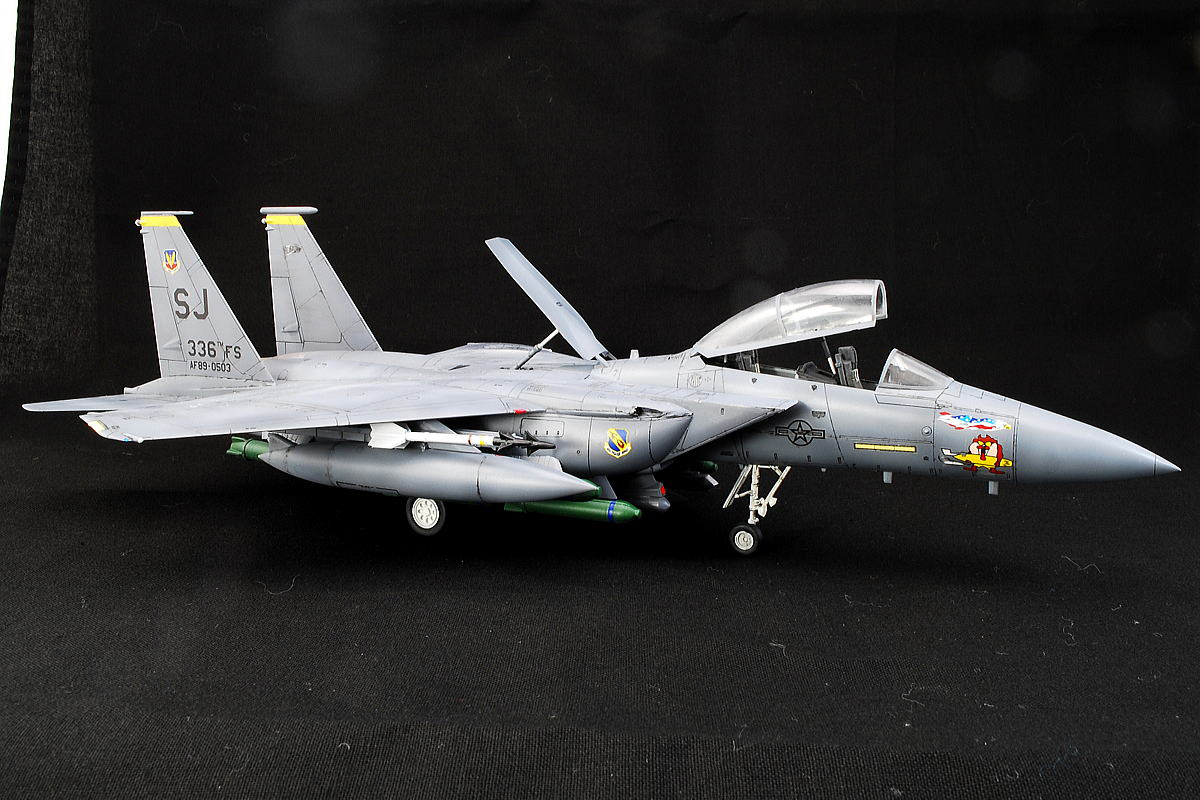 I did not make a comparison object of the size this time, but the Eagle of 1/72 was approximately 18cm. Unfortunately, the assembly finishing up of the right conformal fuel tank did not go well. I think it’s rough… 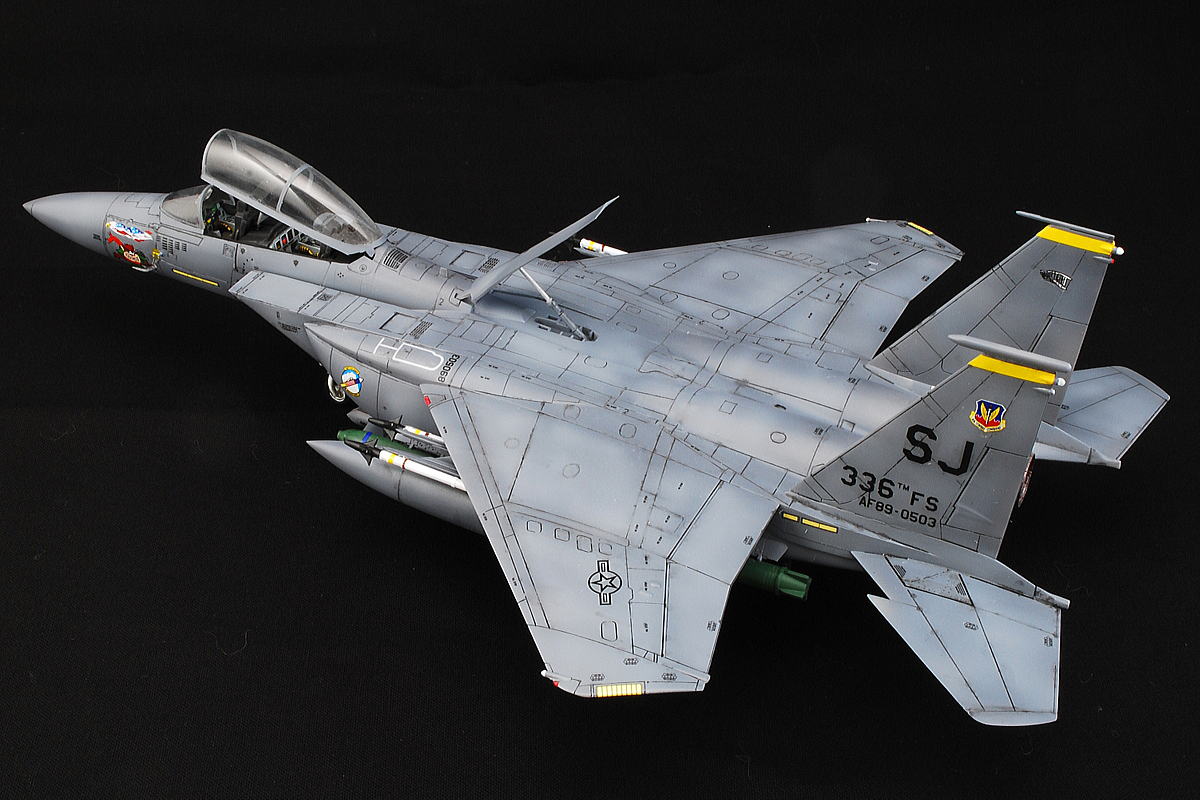 It’s cool when I look at the distance of around 40cm But looking at 10cm, there are many improvement points. The work on the assembling stage was challenging for me. I wonder if it’s becoming used to the process after a couple of jet plane-making. Anyway, it’s a fresh and fantastic experience. I want to try other jet planes next time.
(08-February-2015)

This marking is U.S. Army, 93rd Transport Company, Da Nang, Vietnam, 1963. The 1/48 scale is about 35 centimeters long. It's a tandem rotor with rotors on the front and back, so considering that the display space is much larger, it's awe-inspiring.

This time, I made a Trumpeter kit with a special decal for the Thunderbirds, a Super Sabre acrobatic team. The markings were for Captain Merrill A. McPeak at the 1967 Air Show. He has made hundreds of sorties in the Vietnam War. He was eventually named Chief of Staff of the United States Air Force.

I will try to make a P-40E. At the time of purchase, it was in short supply and only the Japanese captured version was available. P-40E Warhawk USAAF 49th FG, 7th FS, "Typhoon McGoon", Clyde Kinsley, New Guinea, 1943. I used a Super Scale Decal.

I think Revell's newer 1/144 F-14A kit is very good. Although it is a mini scale, it is very delicate and the decal is also fine. This is "Vandy One", Air Test and Evaluation Squadron VX-4, NAS Pt Mugu, California, USA, 1991.

It is a Hasegawa A-7E Corsair II. It is a fairly old release, but it is still a highly rated kit. Marking is ARGONAUTS VA-147 U.S.Navy at USS KITTY HAWK aircraft carrier. I bought it before, so it was hard because the decal has deteriorated.
スポンサーリンク
Zündapp K800 German Military Motorcycle Vulcan 1/35
TIGER-I Panzerkampfwagen VI Ausf.E Latest Type German Heavy Tank AFV Club 1/35