Well, I will try to build this Revell aircraft plastic model, this manufacturer is a rare case for my modeling. This time is P-47N Thunderbolt, blue and metallic coloring is a stylish aircraft. 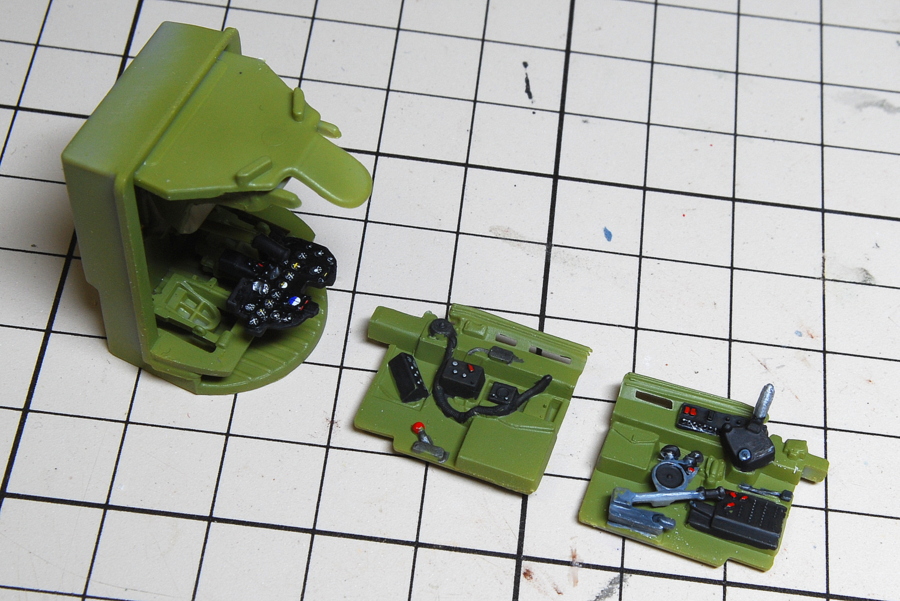 I painted a detailed part of the cockpit. Panels on both sides are not glued yet because I adjust the angle at the time of the build into the aircraft fuselage. 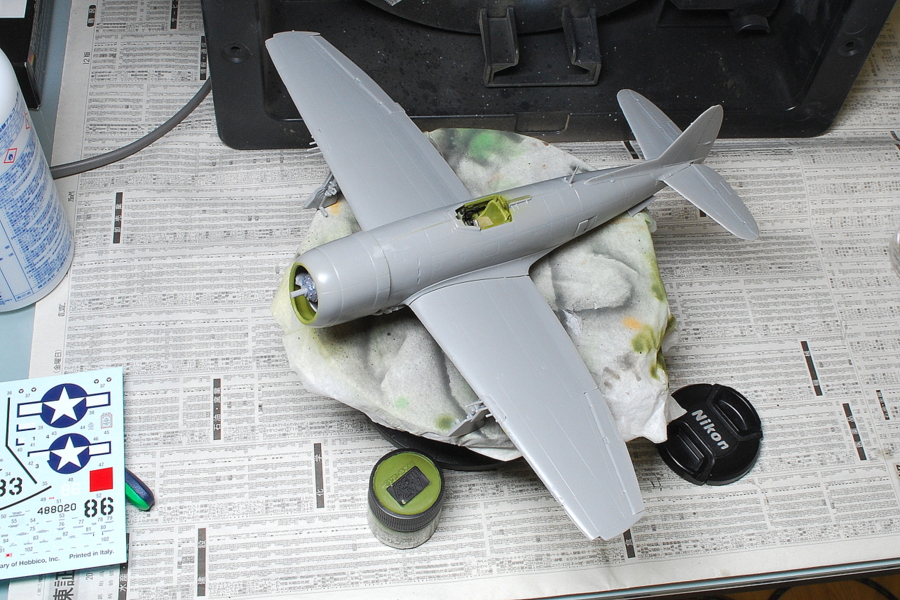 There was a big gap between the fuselage and the wing. I used a combination of jelly-like instant adhesives and plastic styrene adhesives. I think that the joint part became clean though made the airplane after a long time. 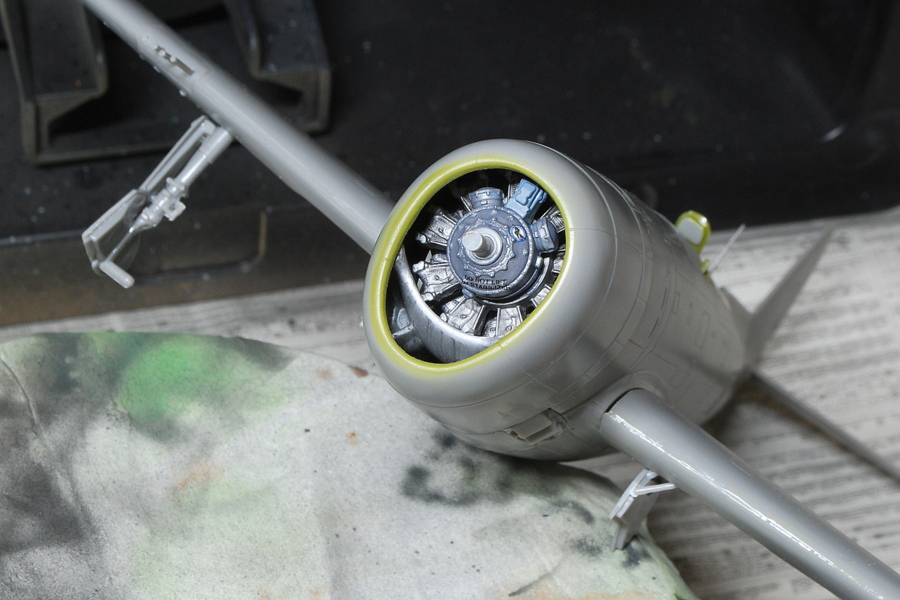 A powerful engine is built-in. I painted and glued the engine cowl. 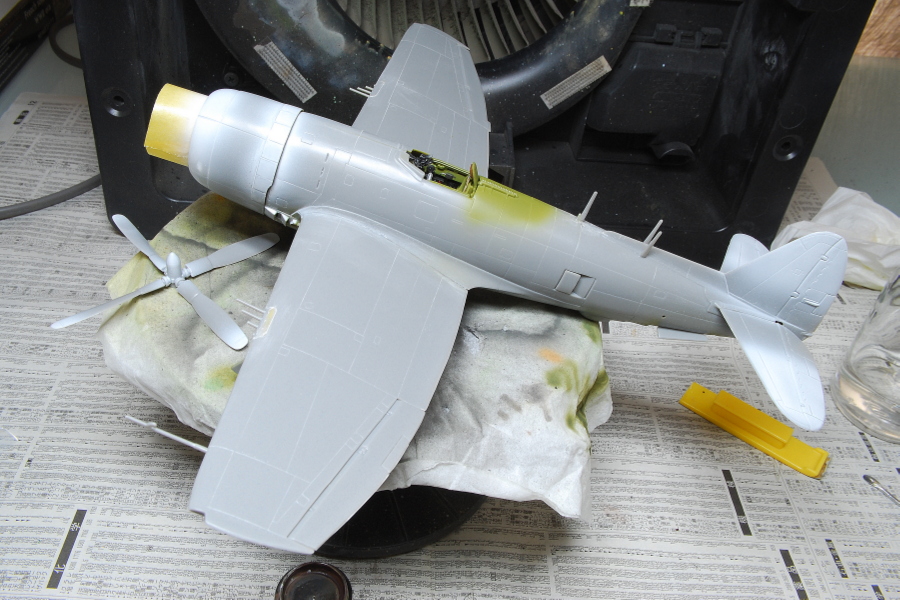 Part of the blue and yellow painted white on the groundwork.

By the way, it is not this kit, but the other day I was net surfing from a morning on Sunday as to whether I would like to make an airplane model. I have not seen the net shop at all recently to avoid ordering and increasing the stock, ｗhen checking for the first time in half a year, I found a bargain sale at a nearby hobby shop on that day! Although it was a policy not to increase Model Kit stash anymore, at the end of last year’s bargain sale I was sorry that I could not go to the shop while traveling in a hot spring, now when I noticed I was in front of the store… I bought 1/48 Airfix Bf109 and Spitfire and Eduard I-16, Also, I got a bonus of 1/72 biplanes, Gladiator, and Swordfish, I was very lucky. The Stock Point, which I made little by little and decreased, went up by 5 points at a breath. Well, I’ll decide not to worry about it.
(07-June-2017) 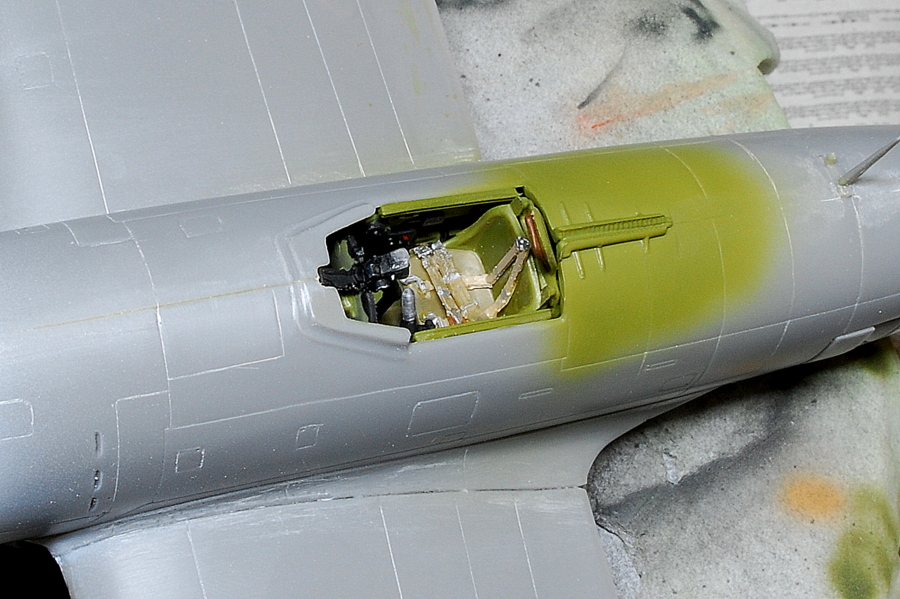 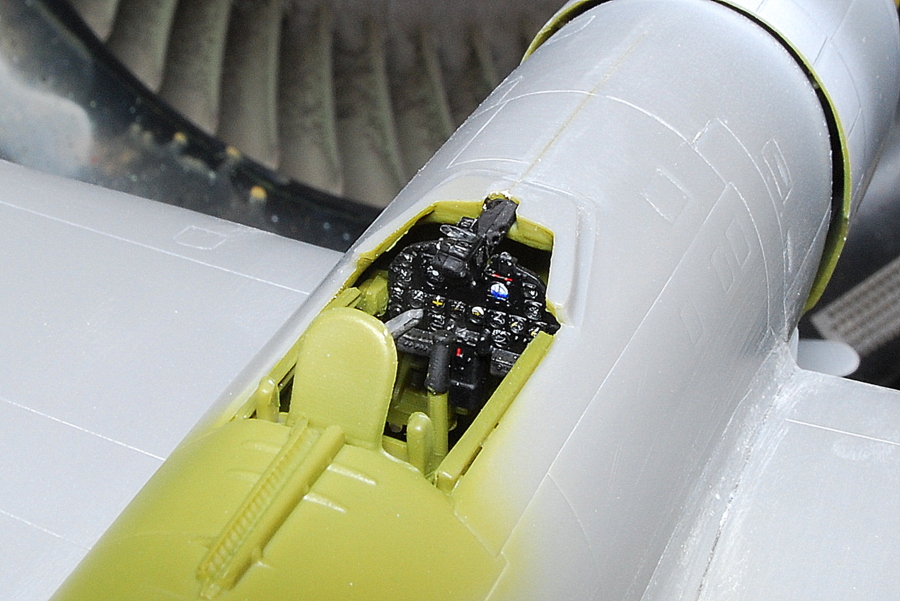 It’s been made various workings of the cockpit. 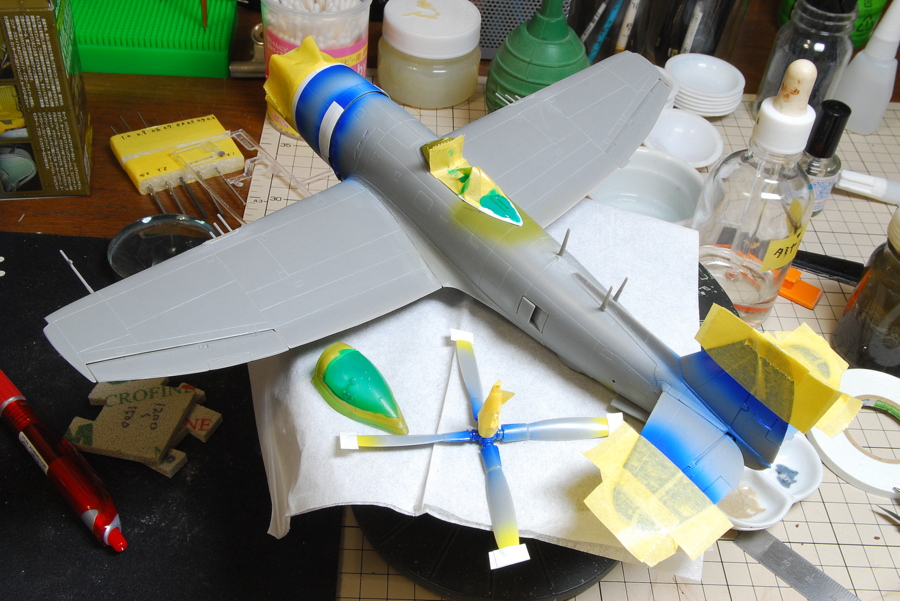 This time I carefully masked and painted differently. Because the inside of the cockpit is better than usual, trying to open the canopy makes masking of the extra troublesome work. 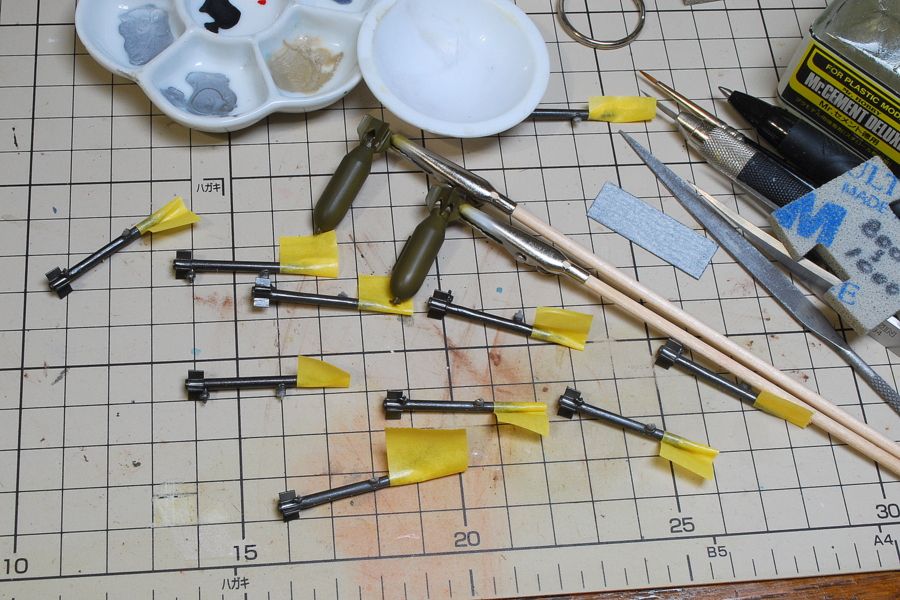 The rocket was painted in black iron color, but it seems to be wrong after all. It is better to paint it silver. Because I am not accustomed to the Revell kit, it is confusing to decipher the paint instructions. 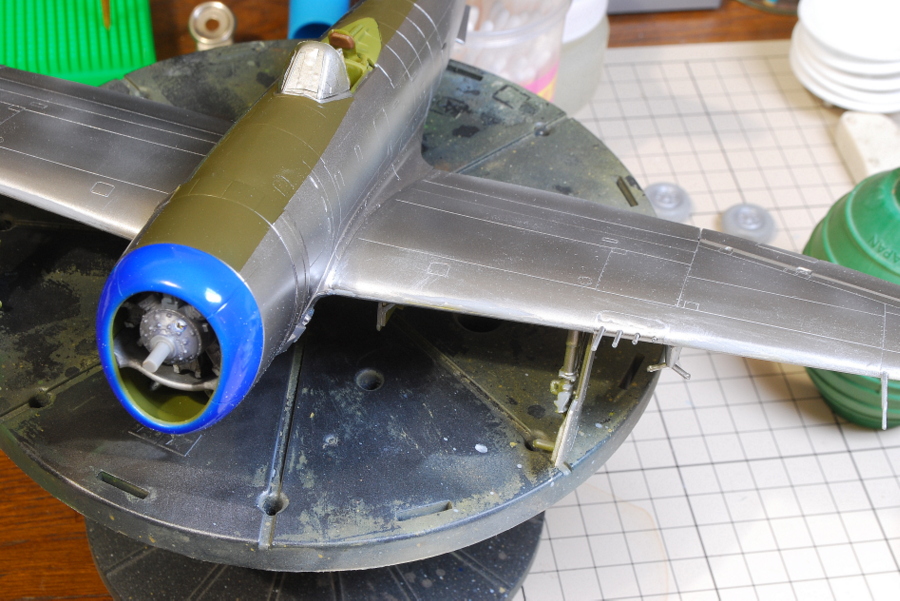 Checking the front edge of the main wing after painting the silver, it has been irregular so I’m placing the putty. I do not care about the lower side of the aircraft so much since the front side stands out when decorated, I think that I will paint it as neatly as possible.
(10-June-25017) 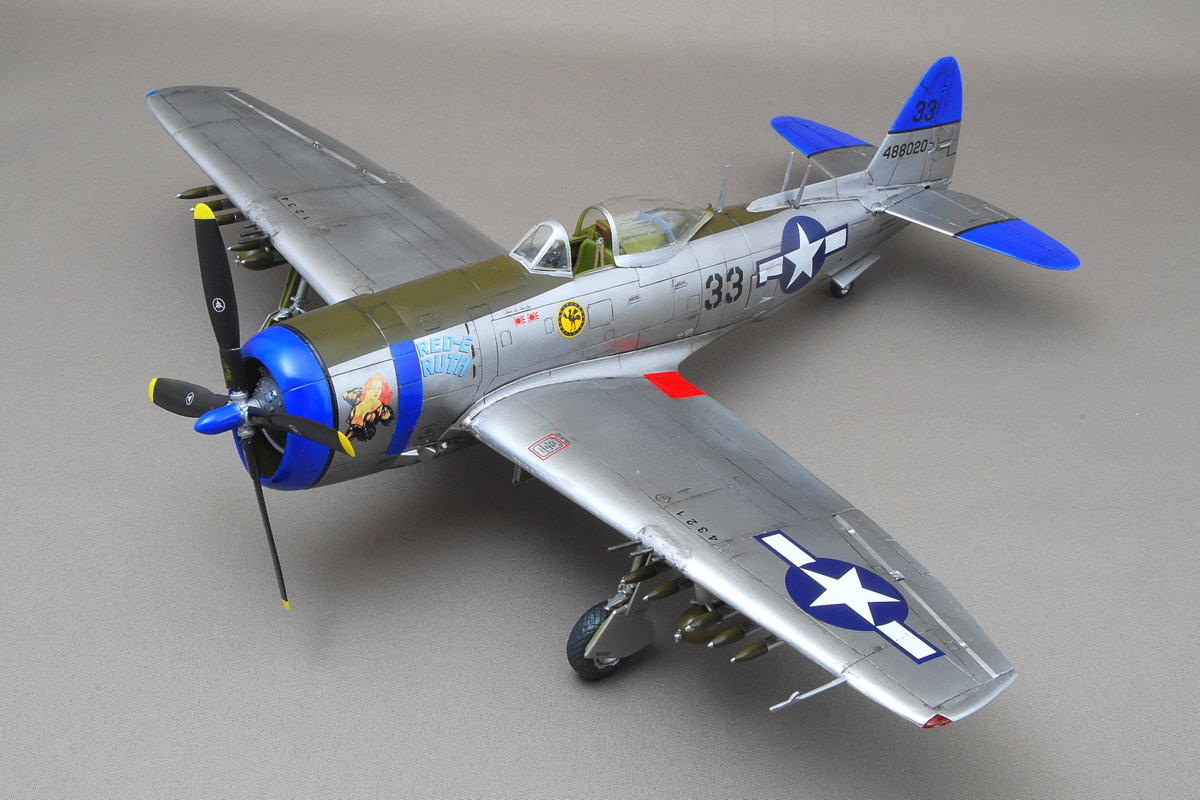 The type N is the final model of the P-47 Thunderbolt. To fulfill the escorting mission accompanying the strategic bomber, it was necessary to extend the cruising distance. To install additional fuel, it is only necessary to add to the main wing other than the drop tank, and the type N has become the main wing of a completely different shape from the previous one. It was a very excellent aircraft in late WWII that also carries out bombing missions. 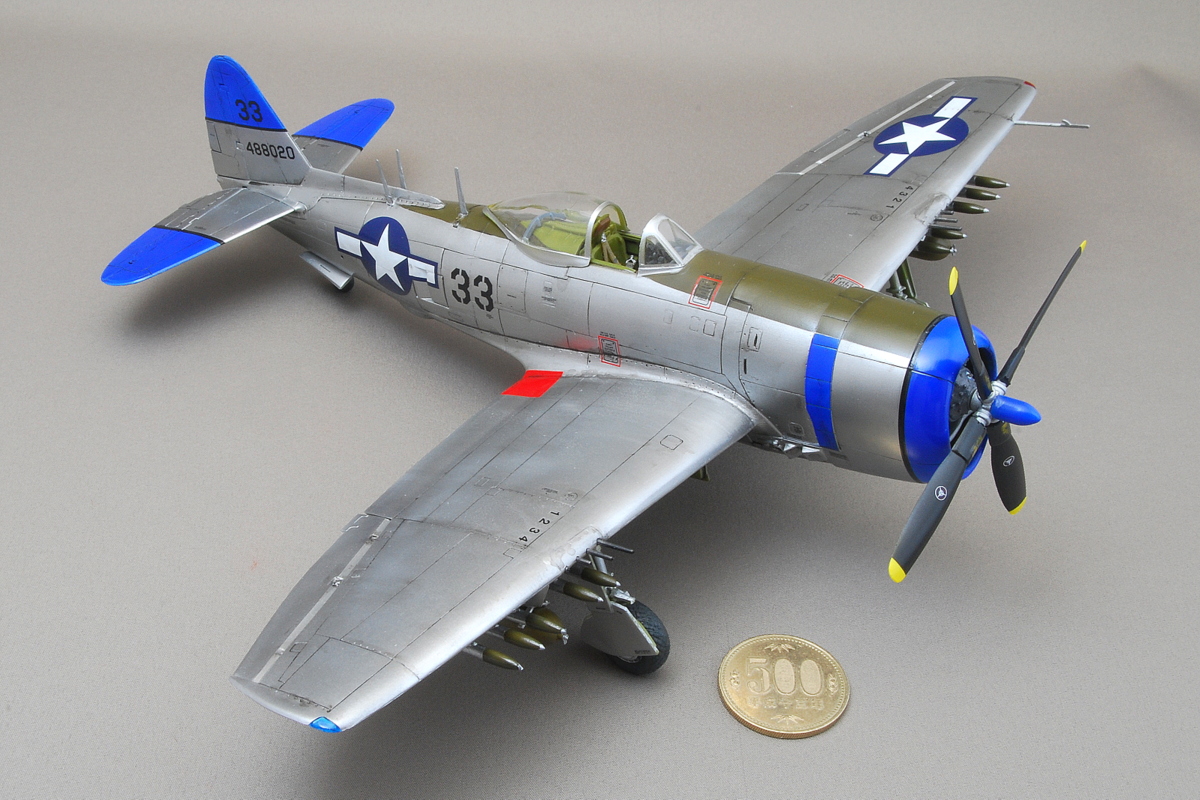 Revell shows production skill levels from 1 to 5, and since this P-47N is level 4, it is the next level of the most difficult one. It seems to be roughly divided by the total number of parts. The part of rockets and bombs, probably, the number of parts has increased. 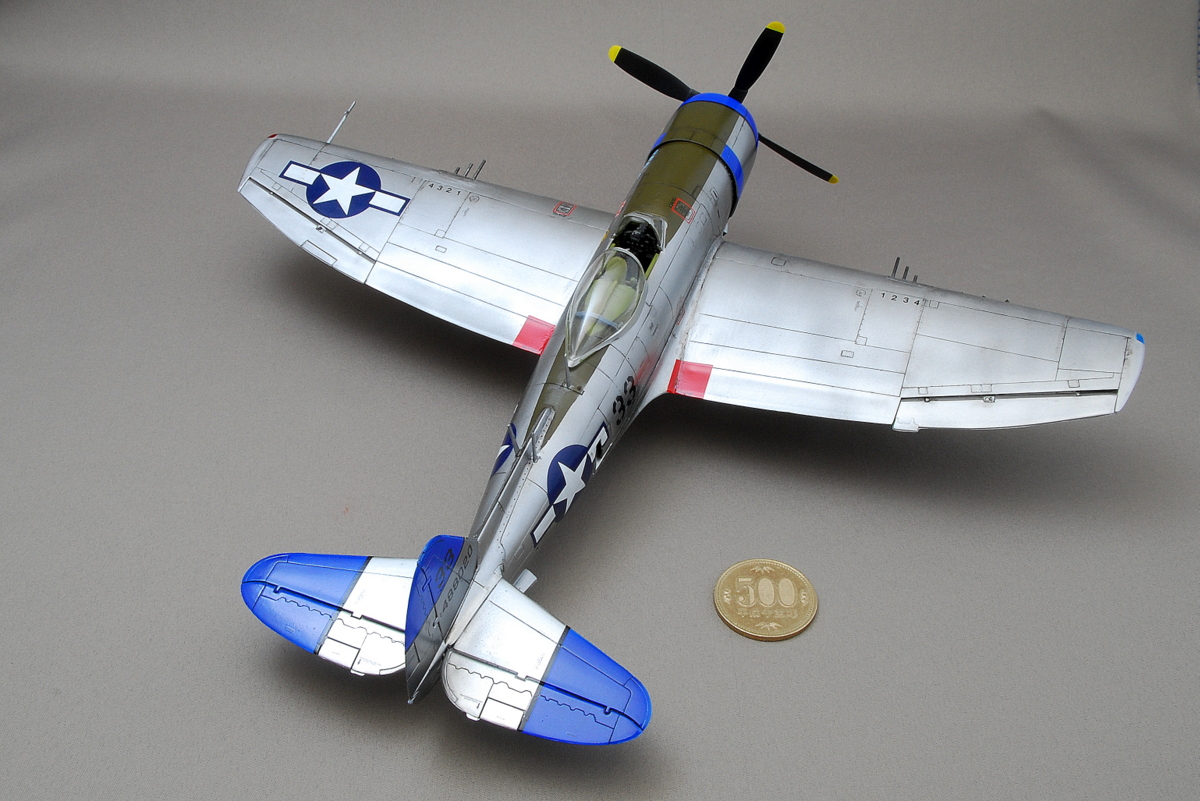 Since the canopy was repolished, it was attached finely. 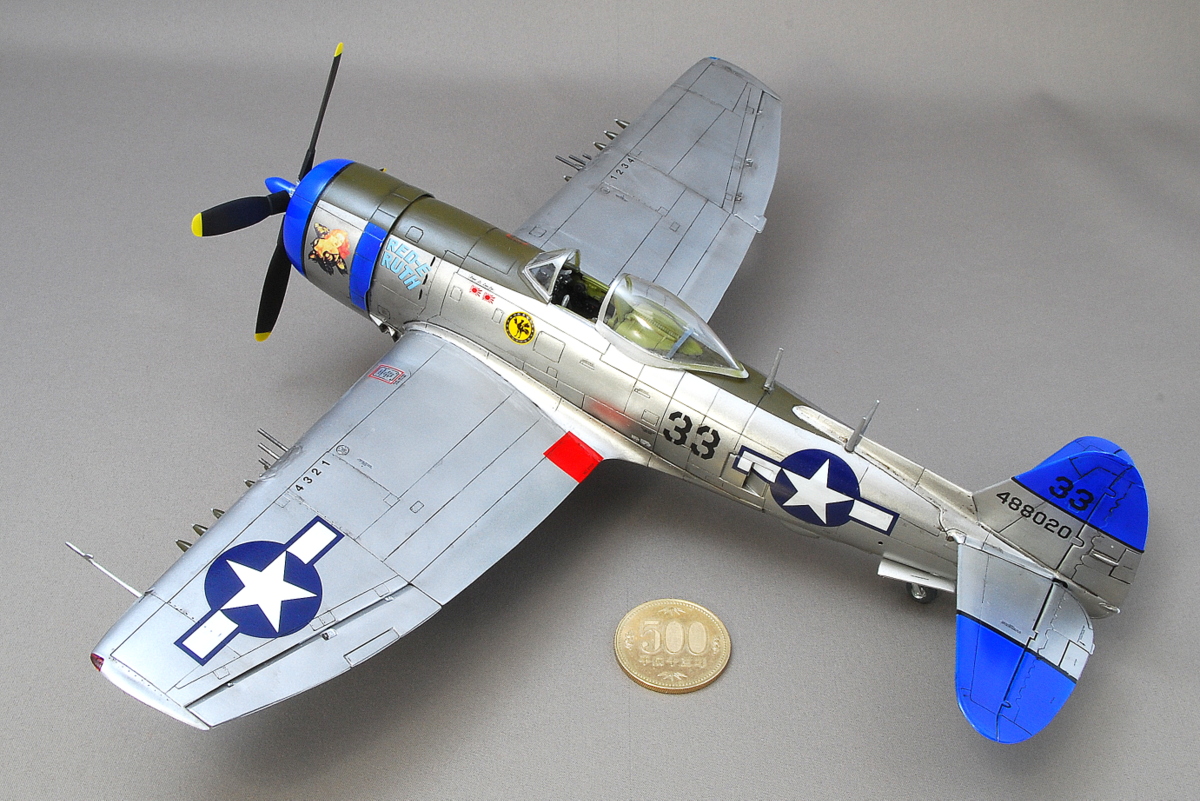 I molded almost all of the panel lines. Inking flew cleanly into the ditch. 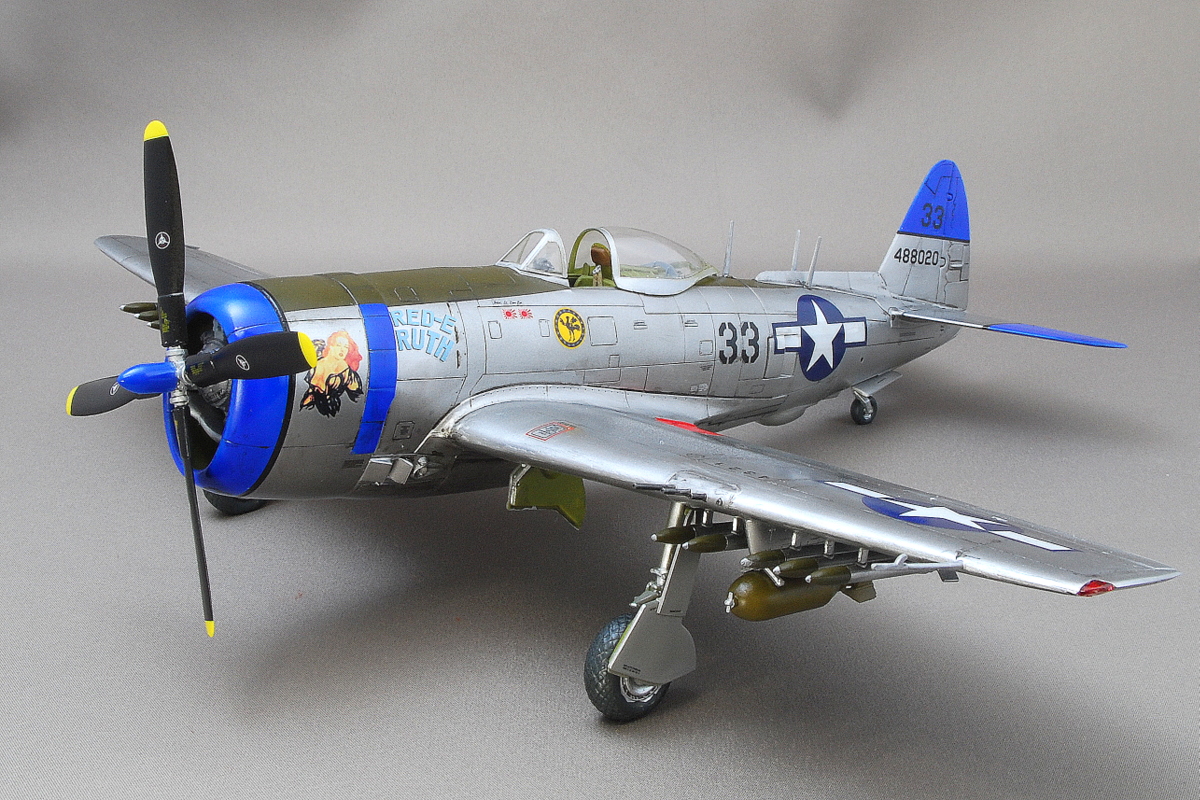 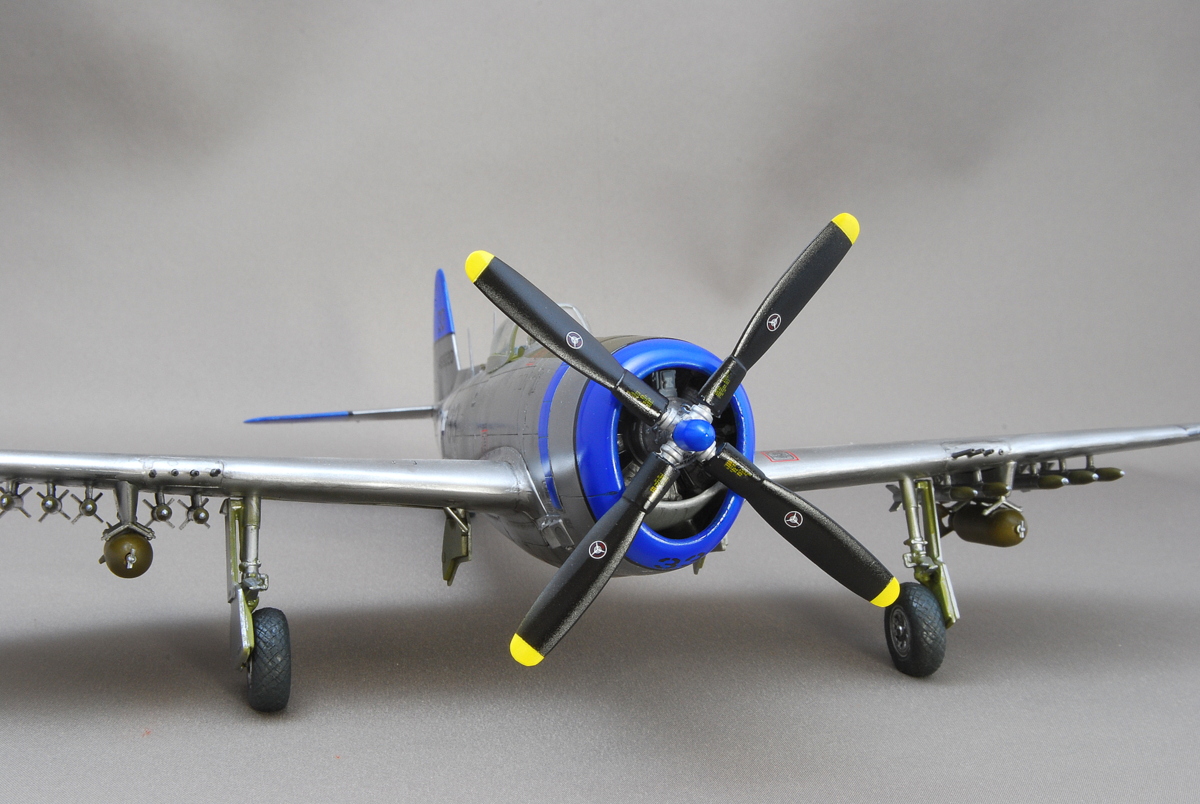 The decal of the propeller is very fine. 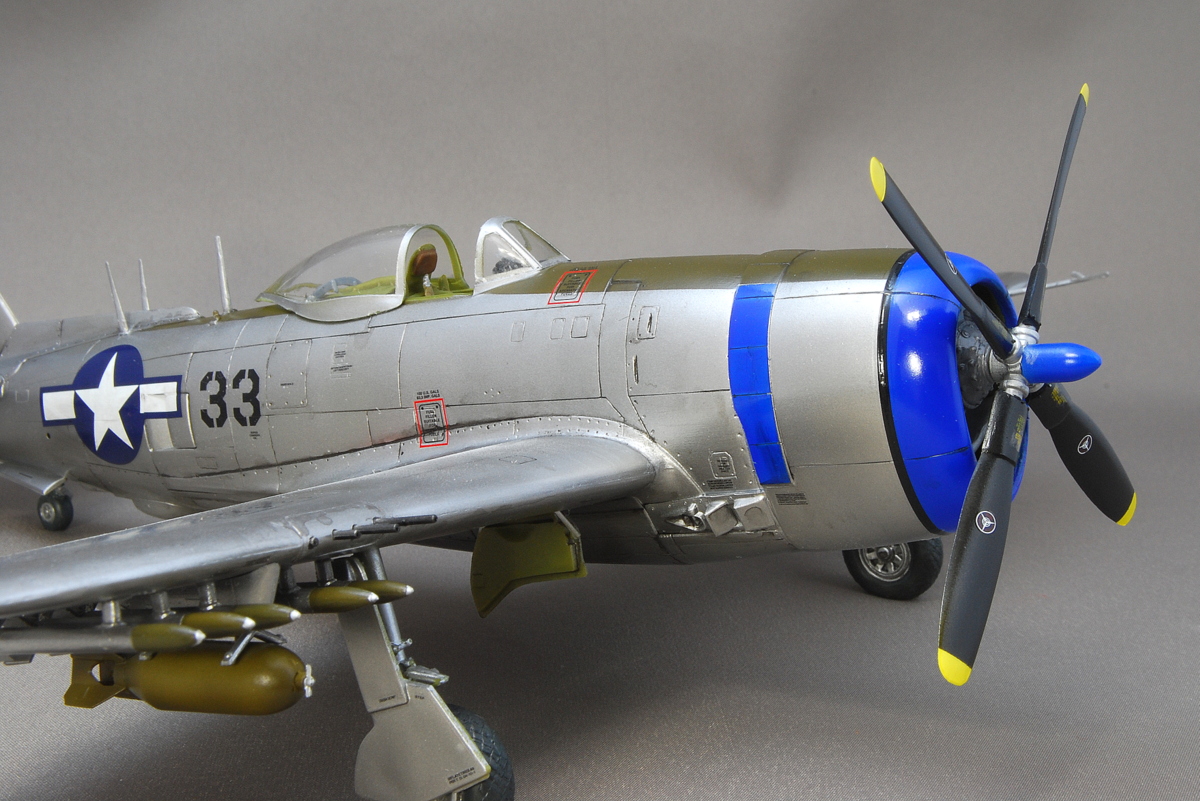 I pierced the muzzle of the four machine guns of the main wing. This kind of work was often done when making an old Tamiya kit. 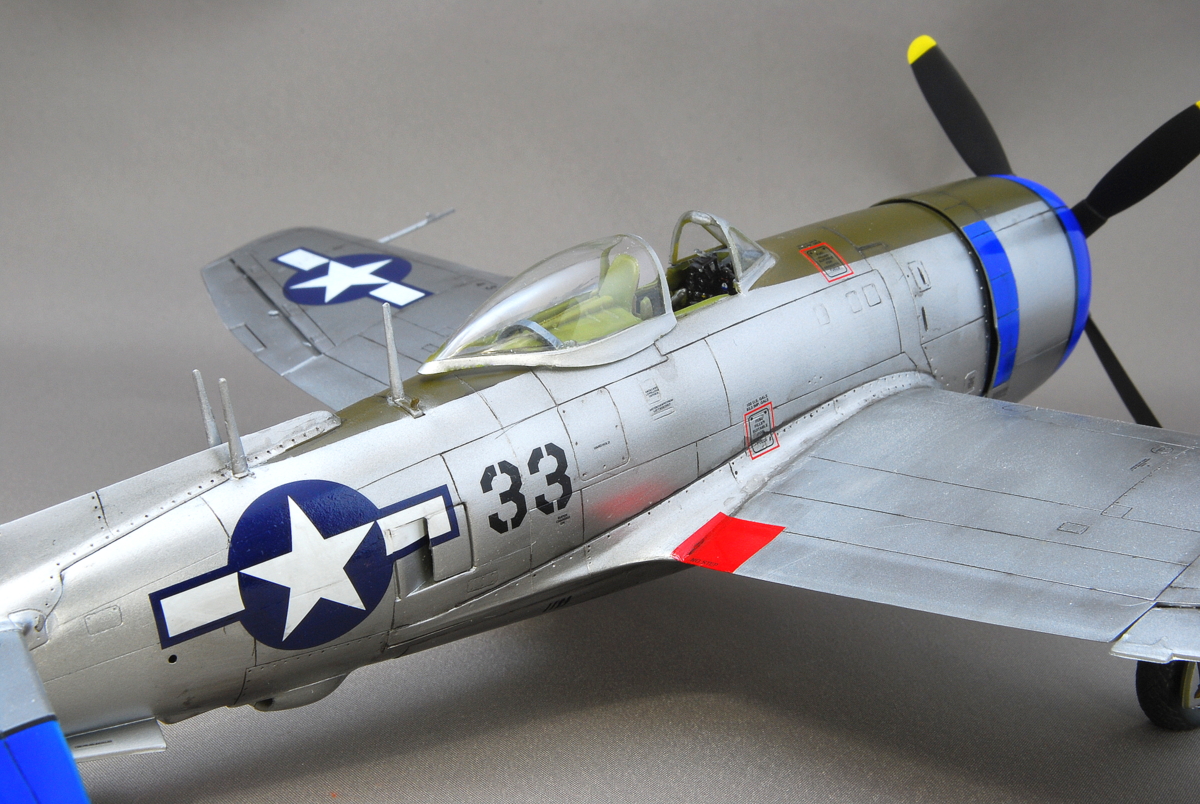 The connecting part between the fuselage and the wing, the finish was not satisfactory. It is embarrassing because it stands out with silver paint. 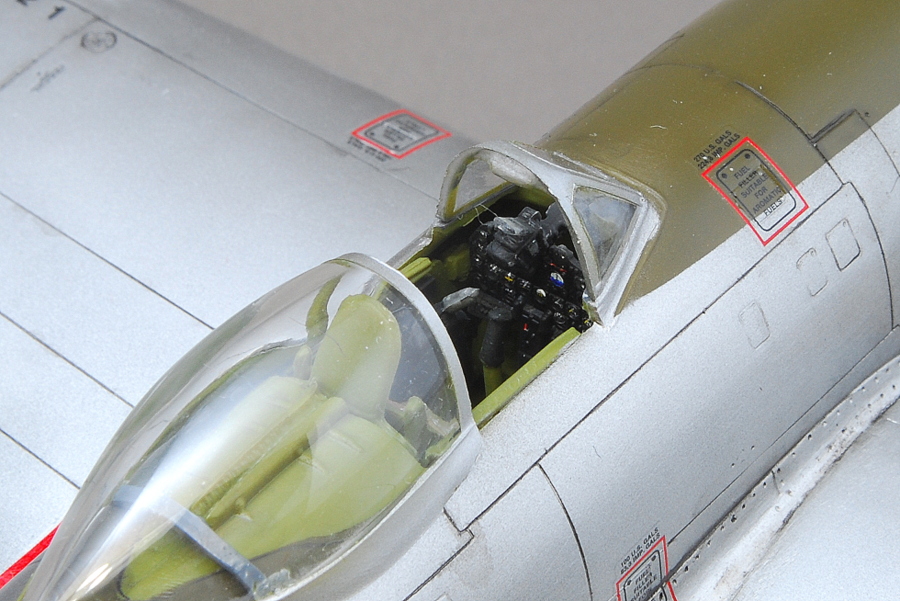 There was advice on the other marking that the antenna wire should be set, and this aircraft did not have it. I wonder if the line was stretched. I imagine that it was enough as much as three antennas and no need for lines. 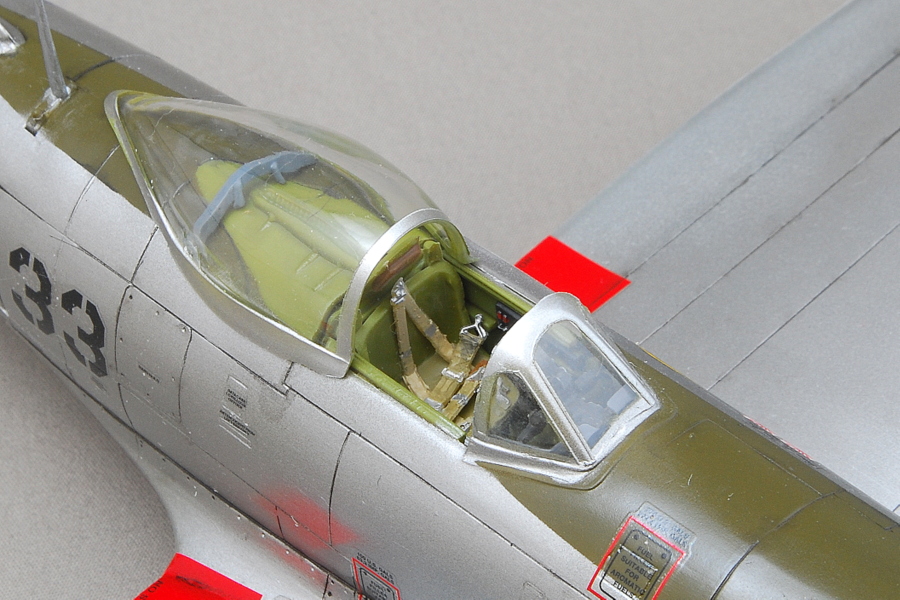 Inside the cockpit, I added a seat belt and precise sense working. It was difficult to paint small parts. 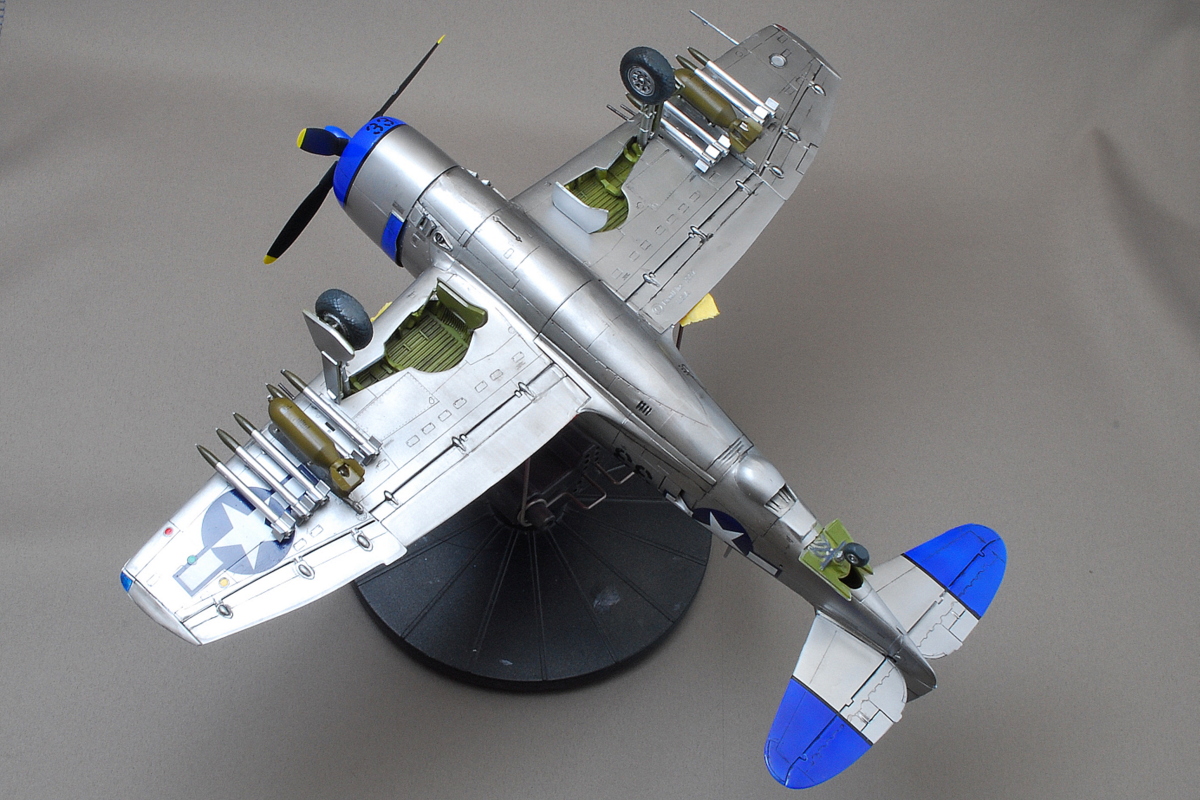 The lower surface of the aircraft has small scratches on its surface, but it is not very noticeable when it is decorated. It is good flowing neatly the inking on the panel lines. 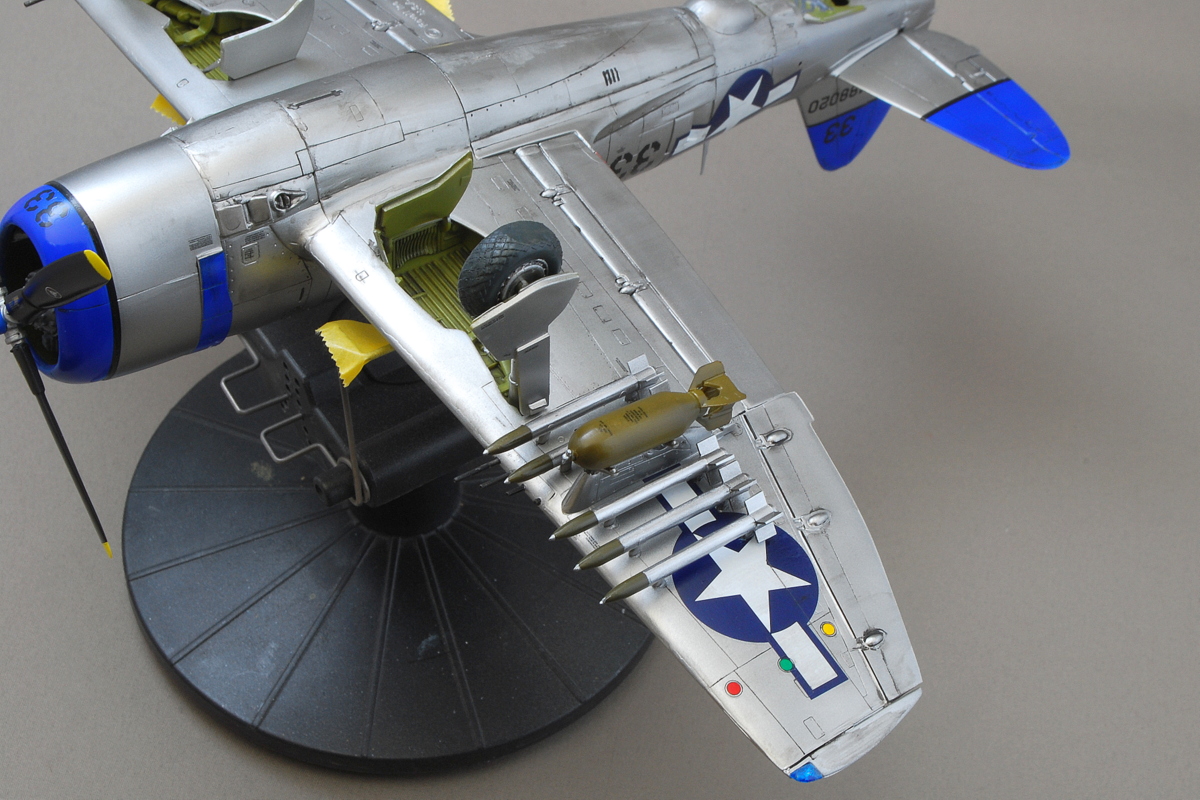 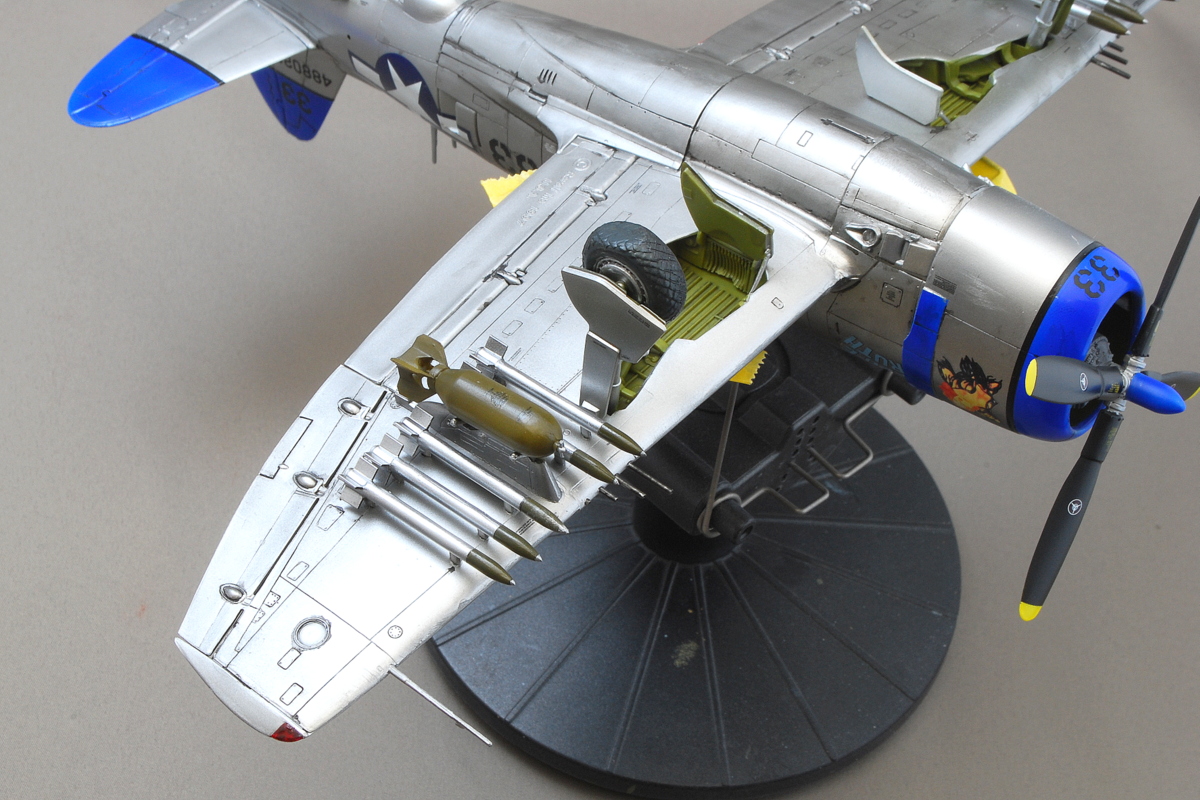 The P-47 is carrying a big horse-powered engine, rocket bullets, bombs, eight machine guns, I like this heavily armed and very strong fighter. 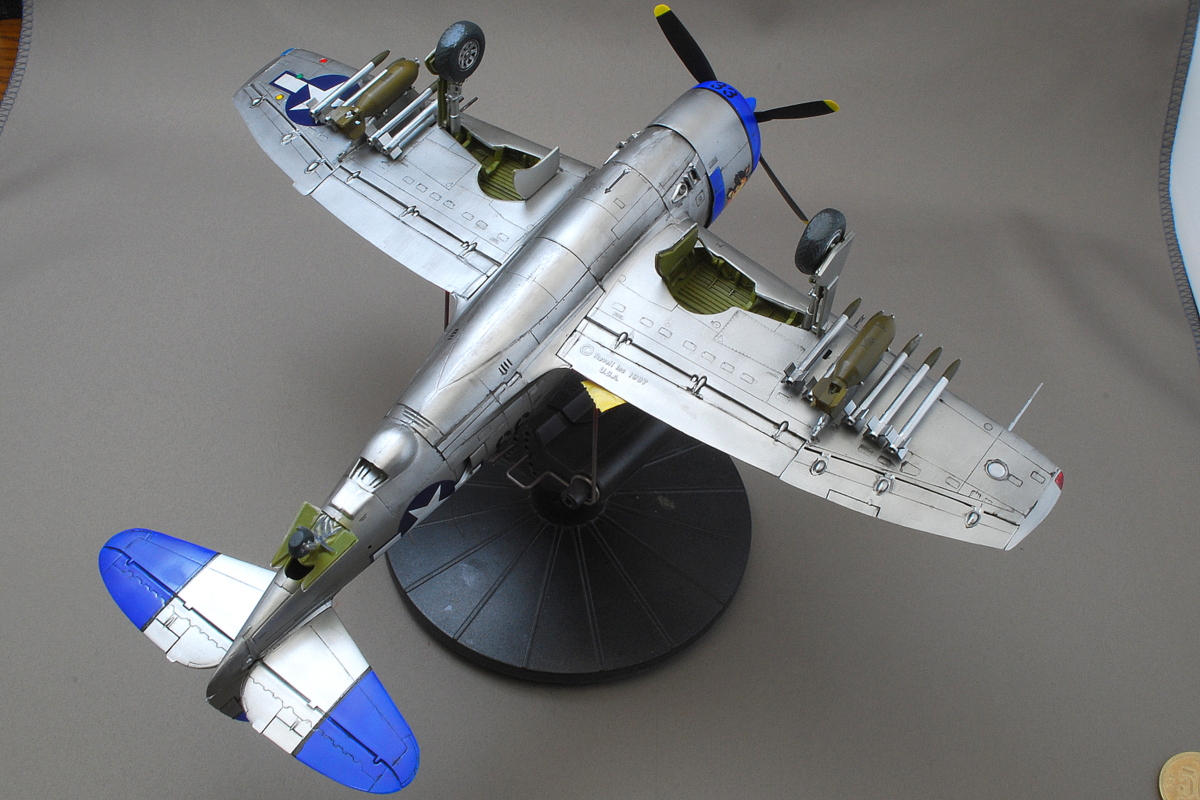 On the backside of the right-wing, there is a stamp of Revell 1997 U.S.A. I dare to leave it as a memorial mark because it is an invisible place, it’s a kit about 20 years ago… It seems just recently. 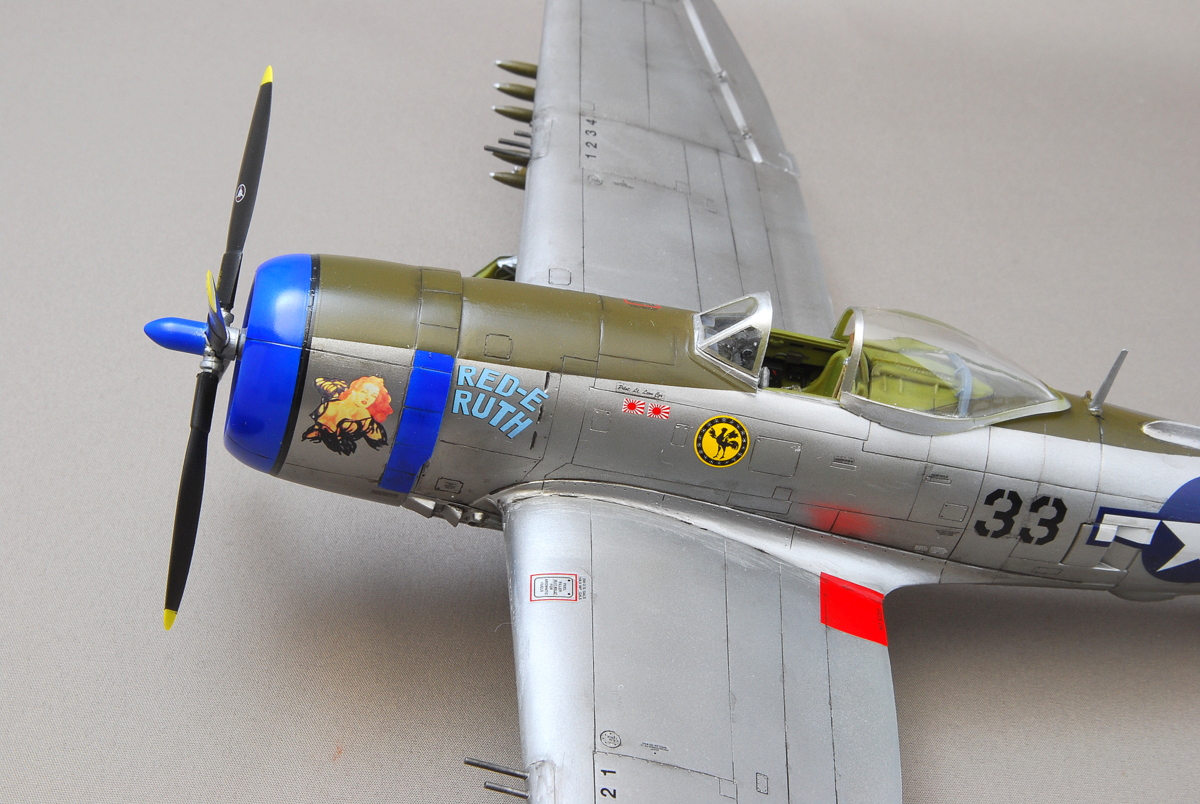 Decal of nose art lady. It is a moral improvement of the soldier in the United States Army, I assure to be slapped on the cheek in the Japanese Empire. Is it a cultural difference? 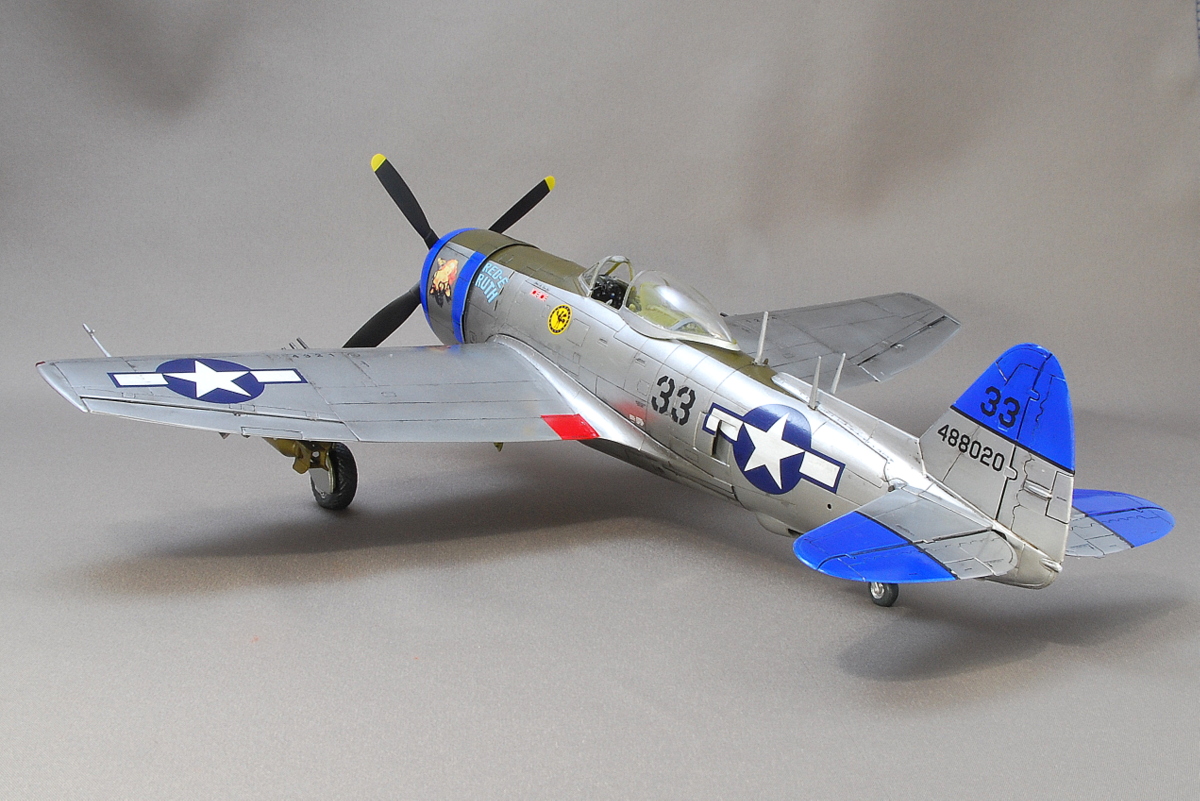 There is somewhat a burr and the gates are thick, but if assembled carefully it was not so difficult. Just honestly, it’s harder than Tamiya and Hasegawa. The decal is very beautiful and of good quality. 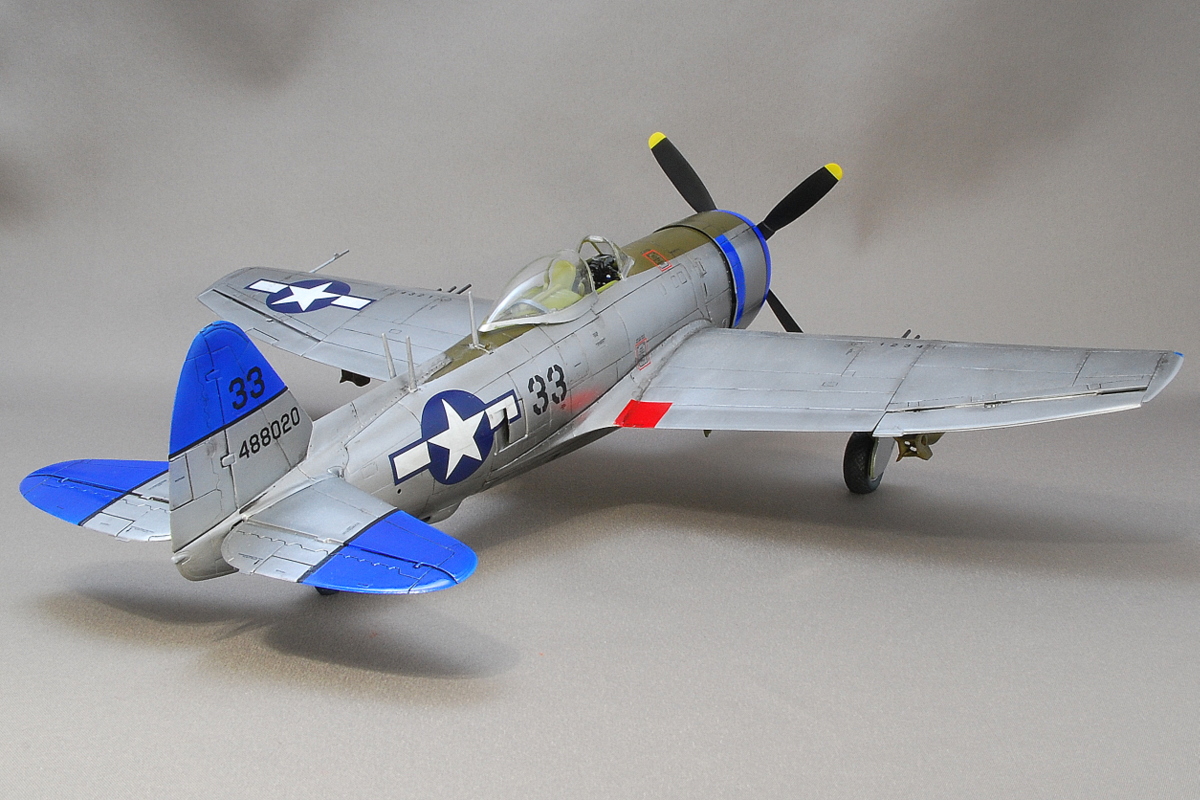 As I saw the package, I thought blue would stand out more, after the building was finished. Maybe the box art has such a strong impression because the back is sea blue and the box is also blue. There is a slight blue paint on the nose and tail, it is a nice coloring and accent.
(12-June-2017)

This is the Hobby Boss, A-4E Sky Hawk. There are various accessories such as a bomb. The marking is U.S. Navy VC-1 (Fleet Composite Squadron One). The nickname was Blue Ali. The aircraft belonging to this unit provided training support for virtual enemy aircraft missions and onboard aircraft in target towing and fleet ECM training.

I thought Sweet was the only 1/144 scale airplane plastic model with a good mold, but this Platz Mustang is pretty good. It is difficult to mark small airframes in detail. But I think propellers are pretty realistic.

This is a Hellcat from the Profipack series that has a lot of Eduard's etched parts. Marking is 'Minsi III'. This Eduard explanation said the following. David Mccampbell commanded Carrier Air Group 15 and was the most successful fighter pilot in the US Navy.

This is the building note of the Tamiya Republic P-47M Thunderbolt. I am quite a beginner, but I managed to complete the plastic model of the airplane. It's hard to mask planes.