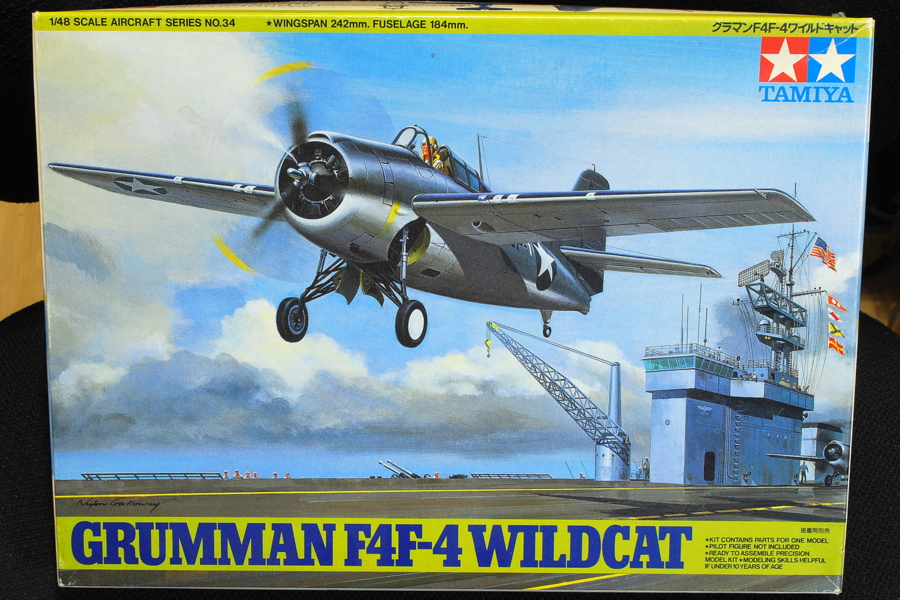 It is a pretty old Tamiya kit, Wildcat. The detail of the surface is thoroughly molded and I prefer this kind of kit. This kit has many small rivets, good surface. 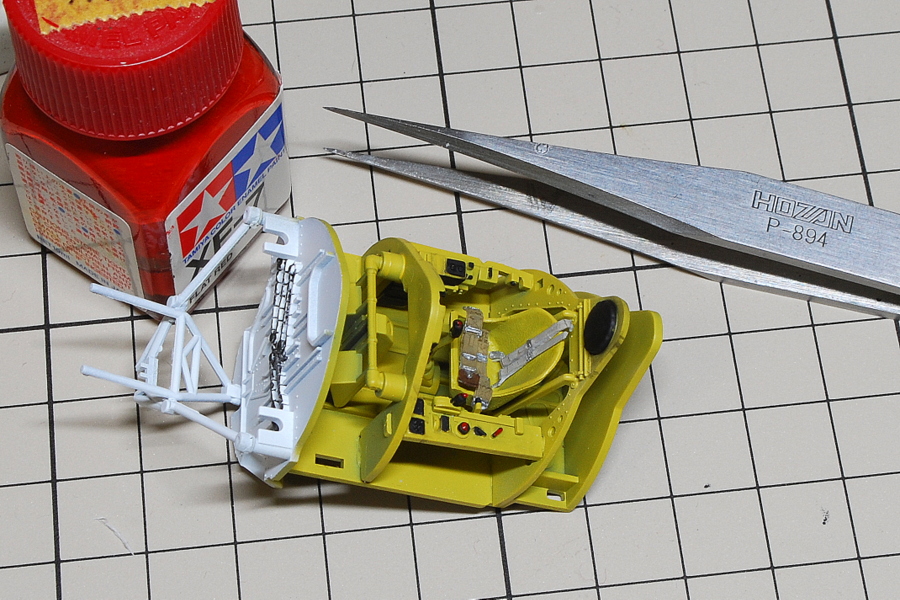 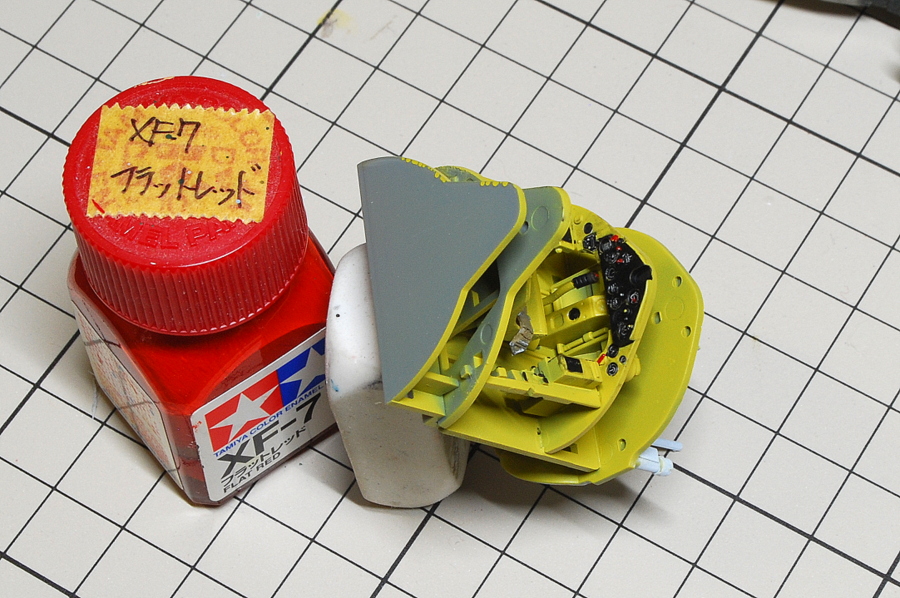 There are rarely any pilots in the Tamiya kit. There is neither a decal of the panel nor a seat belt one. By the way, there were not any decals of the cockpit panel in all 4 models which I made recently. Perhaps this is normal? I have recently used a favorite seat belt part by third parties, but I would appreciate it with the kit. The meter panel of the cockpit is hand-drawn. It became real when I added small touches of red points with a brush. 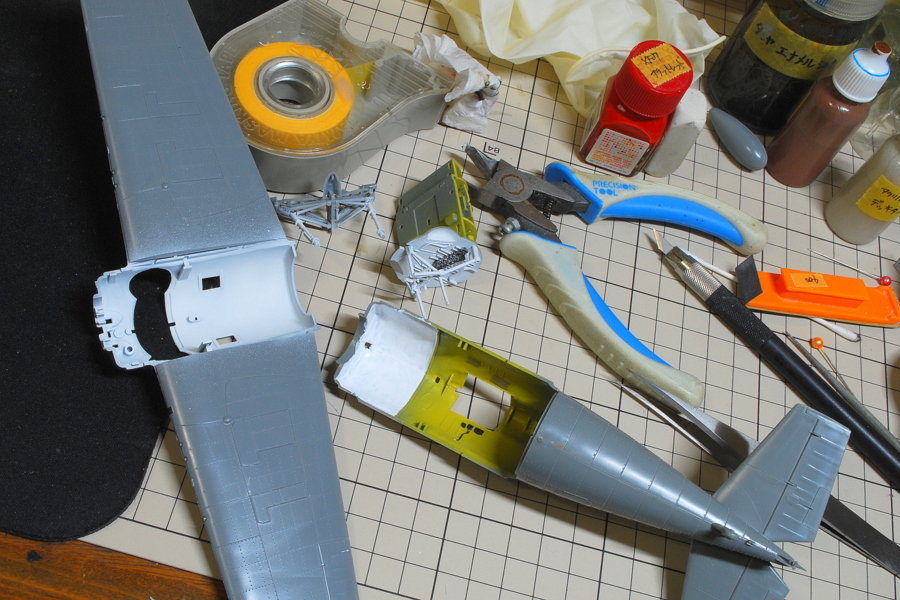 As you can see, the part of the landing gear hangar can be seen well when looking from below. I think you’ll regret it later if you don’t paint the inside of the fuselage properly. 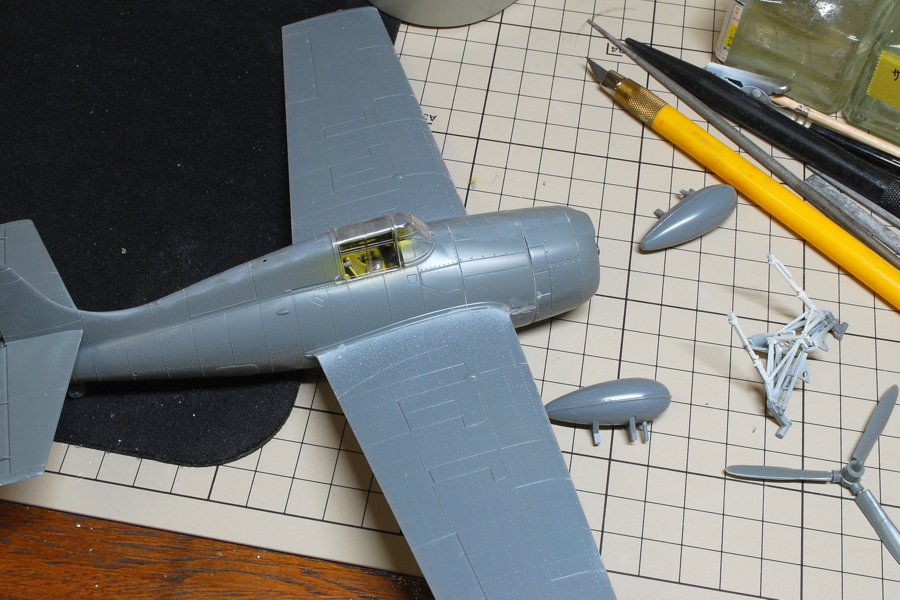 The canopy seems to be having a gap even if I attach it to a closed position, maybe it’s because of the slide type. There is a risk that the mist enters inside, so this time I will install the canopy at the end. The fit with the aircraft body seems to be no problem at all.

Fujimi’s lucky bag, the devil’s invitation came. It is one month earlier than usual. It was always sold out when I was trying to purchase it several times in the past. I am not interested in it and the Egg Ship series Chibi – Maru, but it was included in past lucky bags. I have a kit of Fujimi two battleships, one aircraft carrier, only one heavy cruiser, there are not many completed Fujimi battleship kits I made in the past, I thought it’s little possibility of duplication. Anyway, I ordered one set of JPY10,000 1/700 series. Probably there are about 8 ships in there… I want to reduce the stock but I bought it.
(14-November-2017) 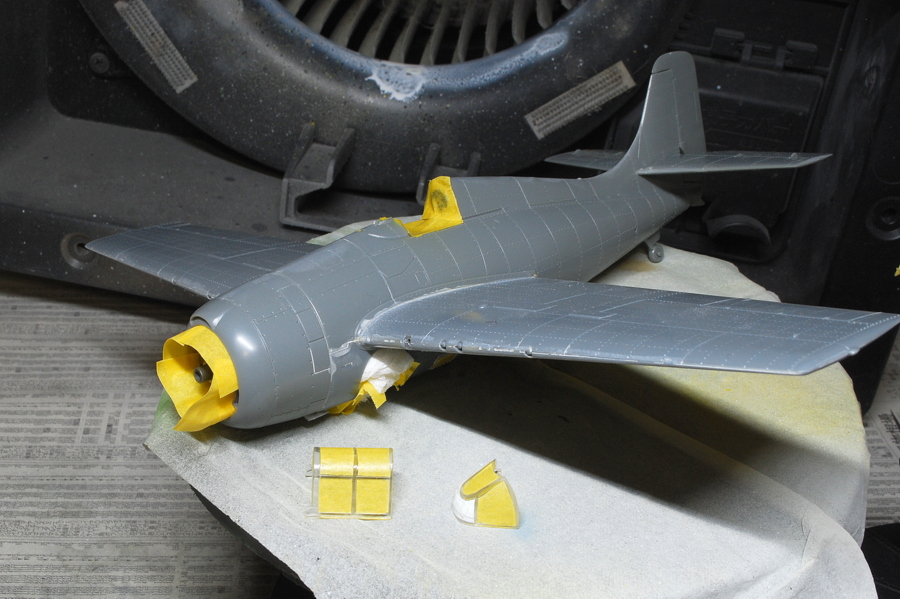 There are many parts where mist easily enters. The cockpit was masked exactly without any gaps. The landing gear part rounds out a small tissue and packs it, and the edge part sticks the slicing of the masking tape. It is rather rough. 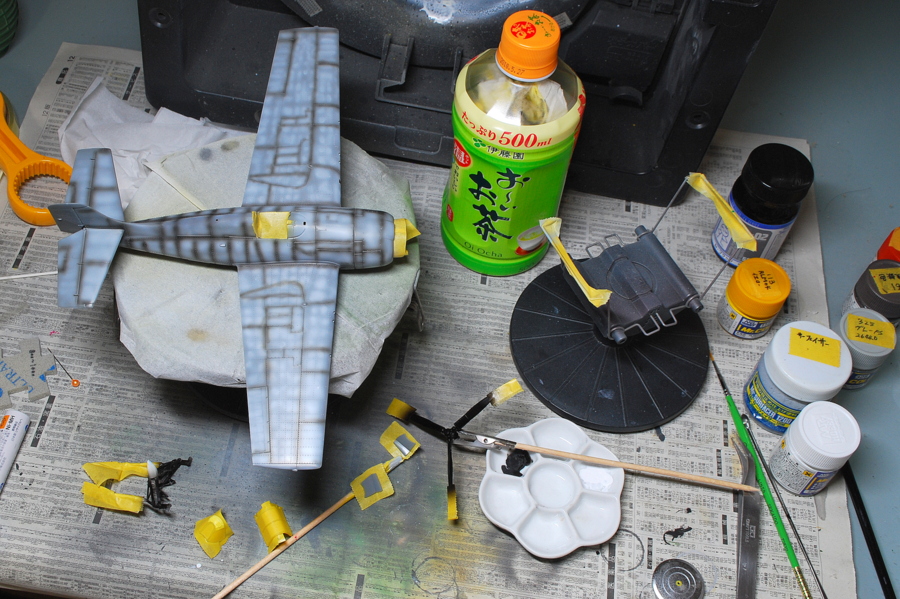 I made a shade of black and white undercoat. This kit has many rivets and molds. It is not a boring surface, even if painted normally, shade may not be necessary. 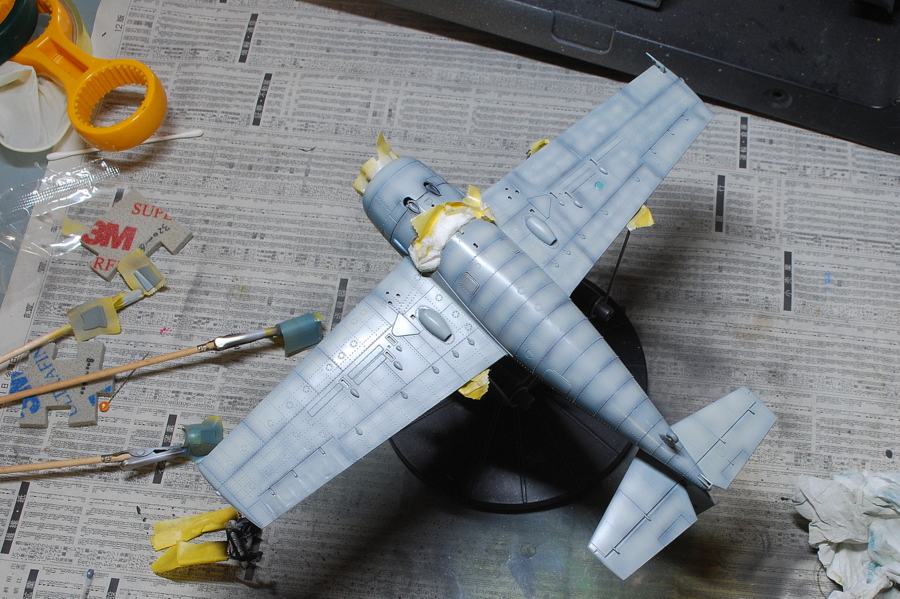 I splayed overcoat with clear before pasting the decal. 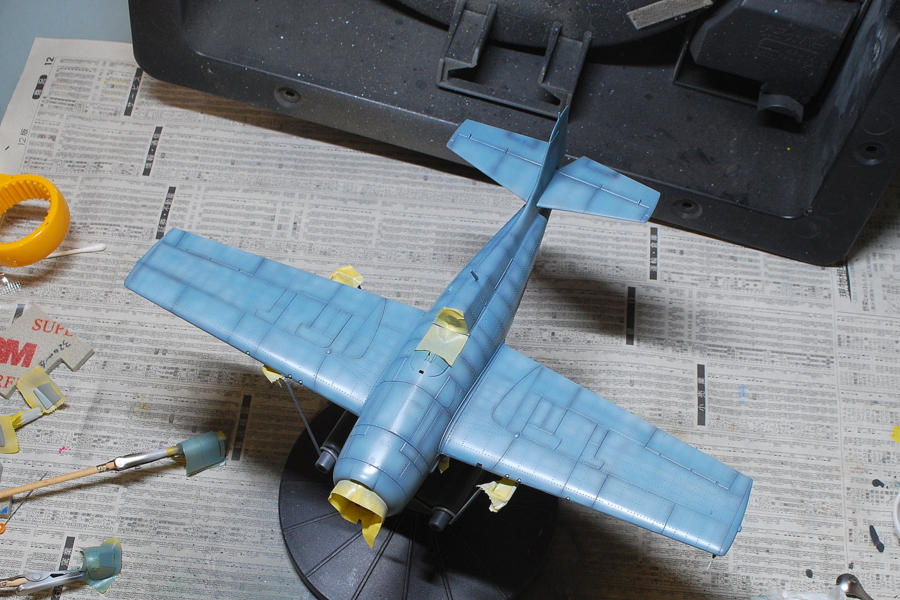 In Tamiya’s painting illustration it is an instructing color mixing, I just have a Creos WWII U.S. Navy Aircraft Standard Color set so I will use this set #367 blue-gray. It is handy as it does not have to make much paint as it does when mixing yourself. It is impossible to make the same color twice. 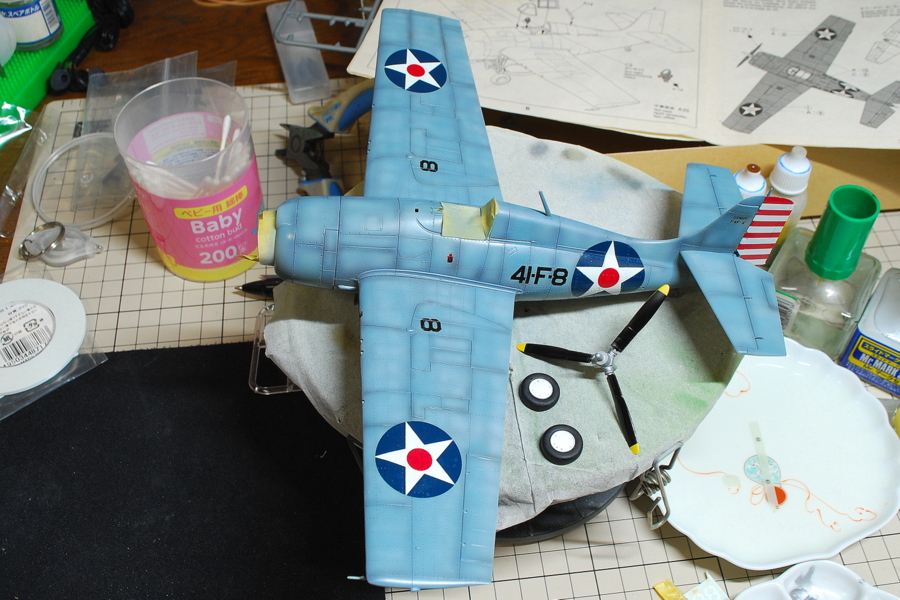 I chose the national mark of the US in the early stage of World War II. I pasted the red circle in the middle after the star decal was almost dry.
(17-November-2017) 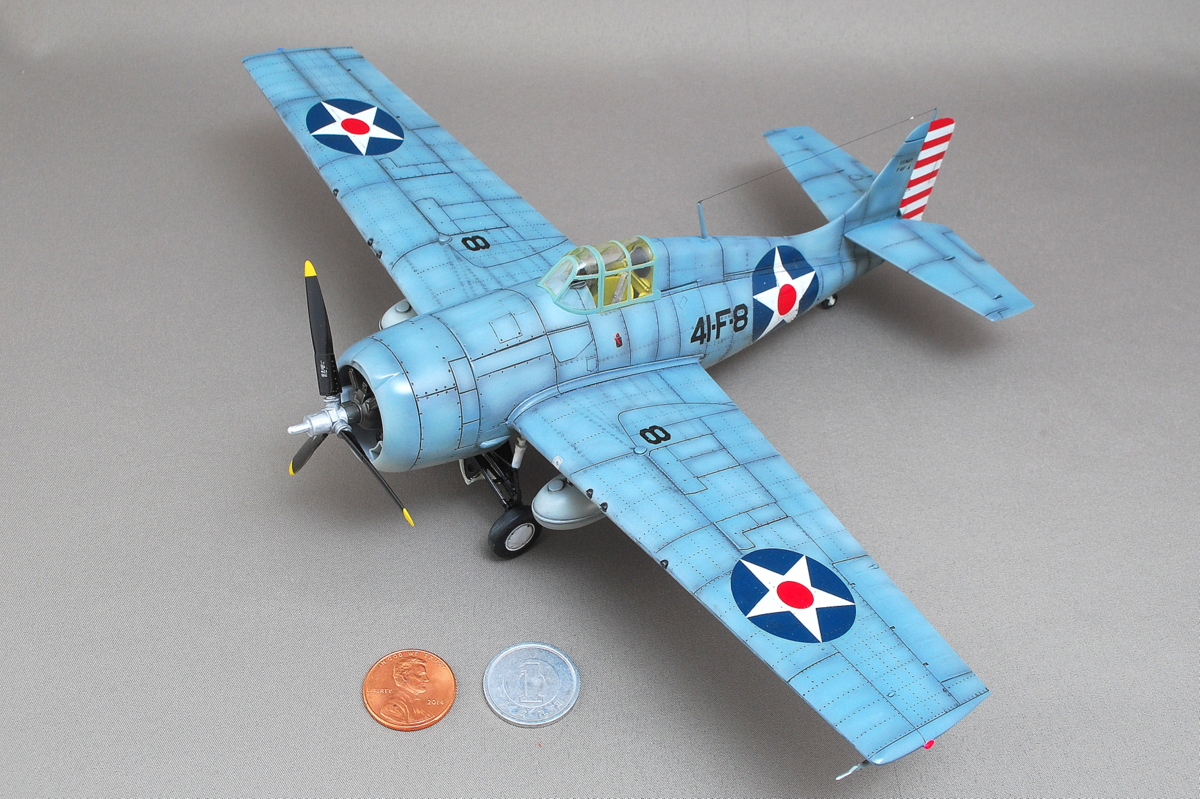 This Grumman F4F-4 Wildcat was the only fighter that could couple with the Zero of the Imperial Japanese Navy at the time of the opening of the US-Japan war with the Pearl Harbor attack on December 1941 in the Great East Asian War. By the way, in the Pearl Harbor attack, the Japanese Navy did not attack the private facilities and the hospital ship. There should have never been anything attacked intentionally. The Wildcat is the world’s most advanced fighter of those days. It is a folding type, main wing to facilitate handling on the aircraft carrier, and six 12.7mm machine-gun are equipped. 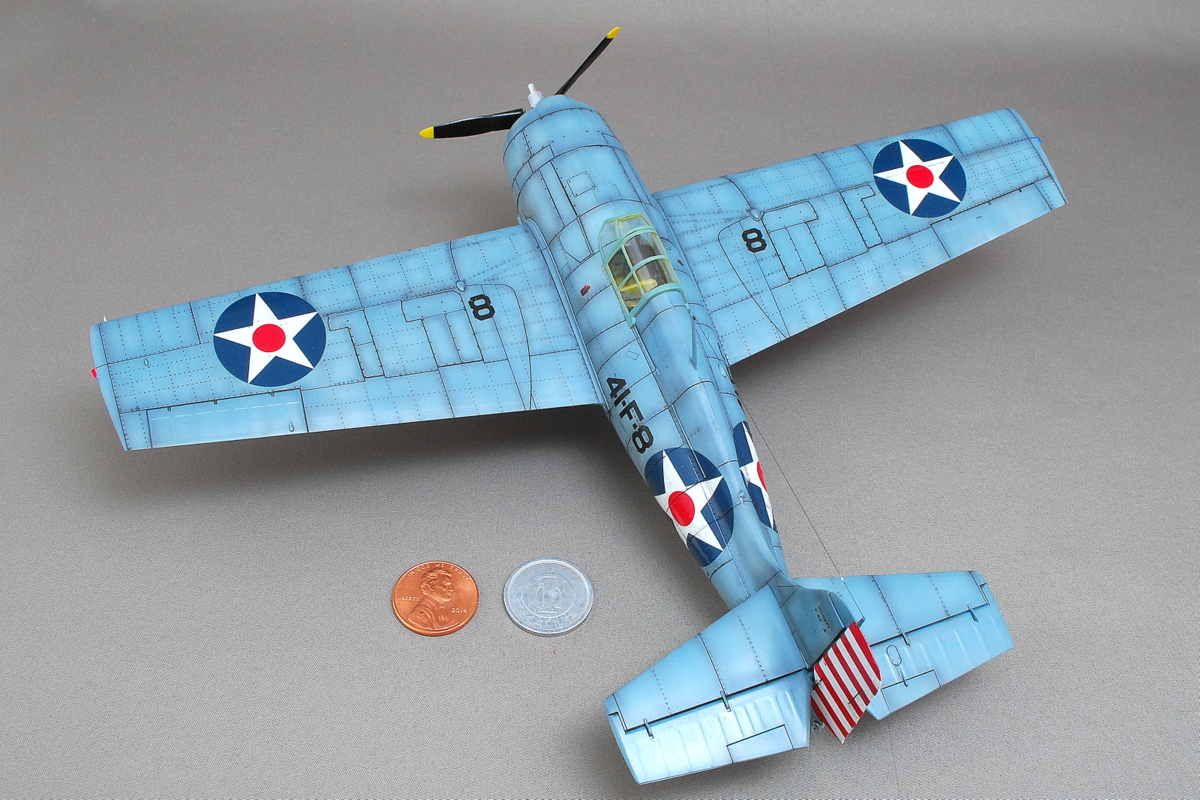 Zero fighters were superior in turnability and cruising distance. Wildcat was superior in terms of the rapidly descending performance and bulletproof performance, equipped with a radio. Other performances are almost the same. Wildcat fought with Zero at the same level to use two fighter team fighting called Thach Weave tactics and Hit-and-run tactics. 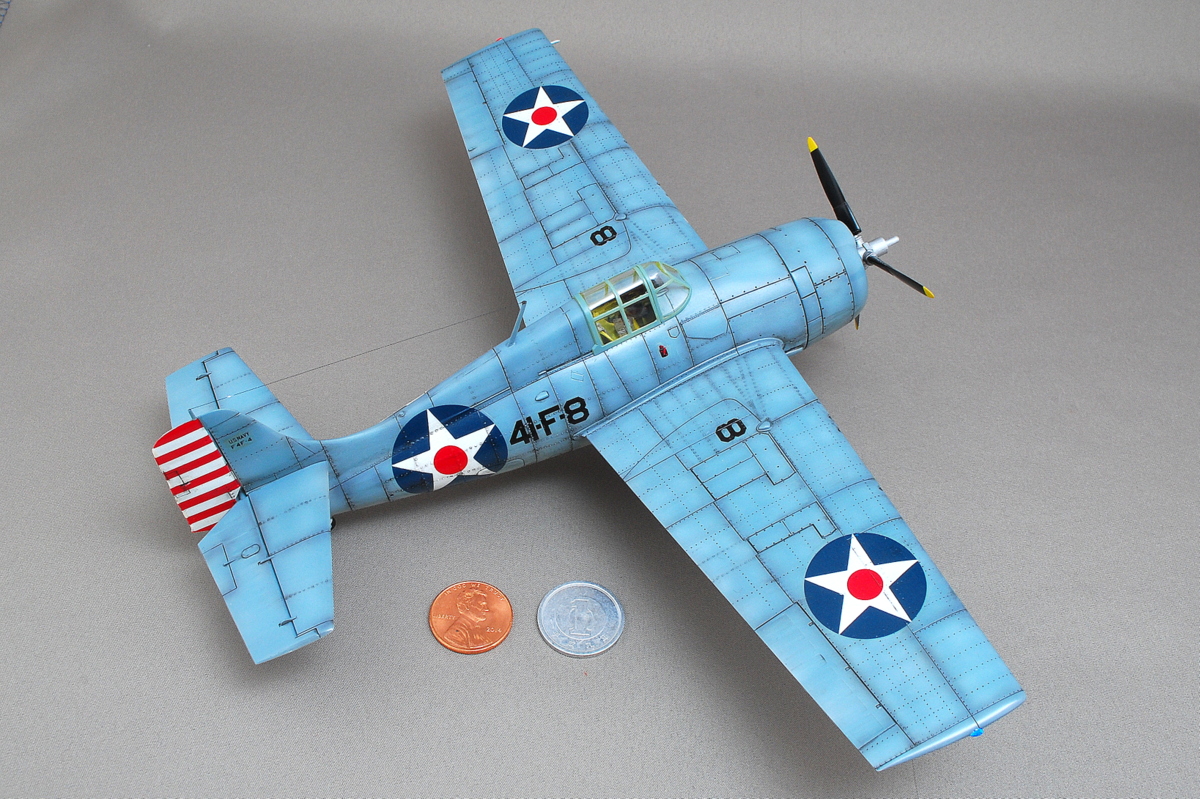 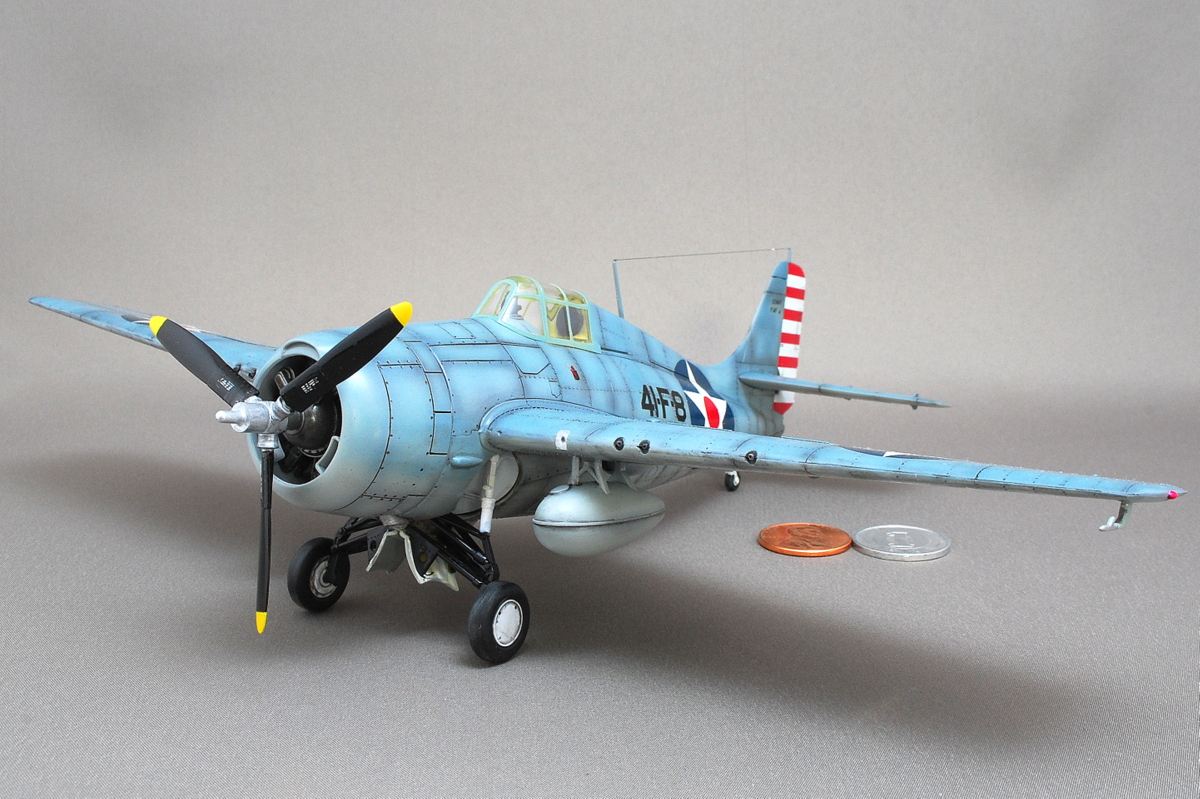 Clear is sprayed on the decal for the finish. There were some fairly large decals this time, and it was good that I could paste them cleanly without wrinkles or breaking. 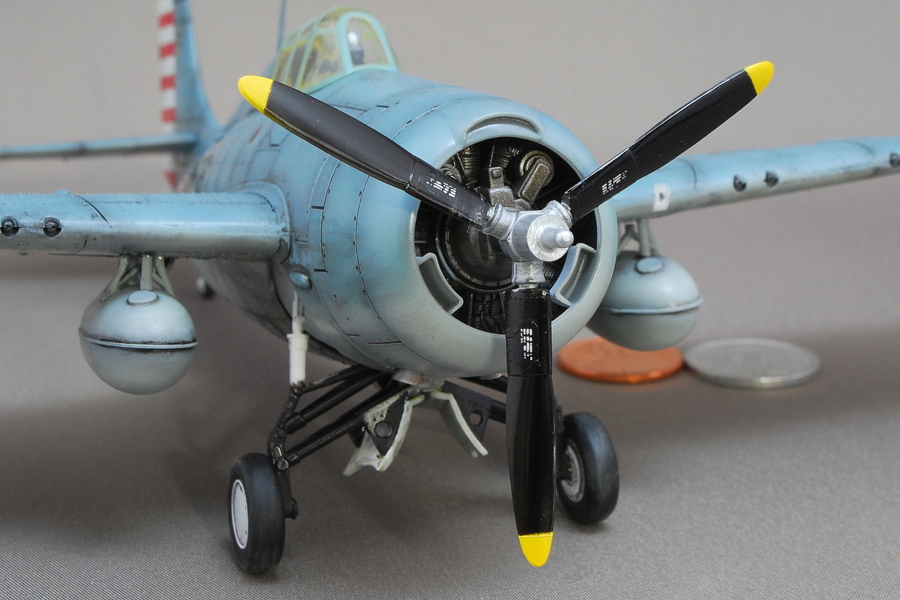 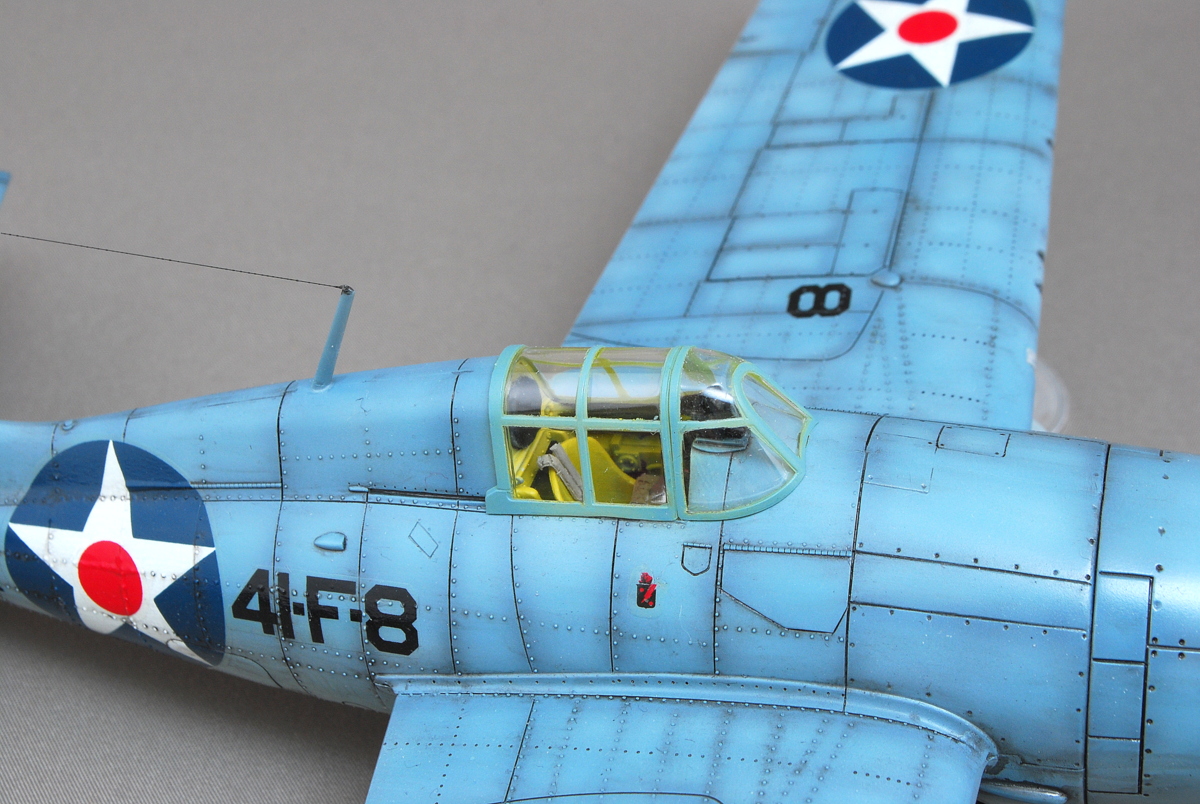 The canopy shined when polished. I built it in the closed state, but also visible inside clearly. 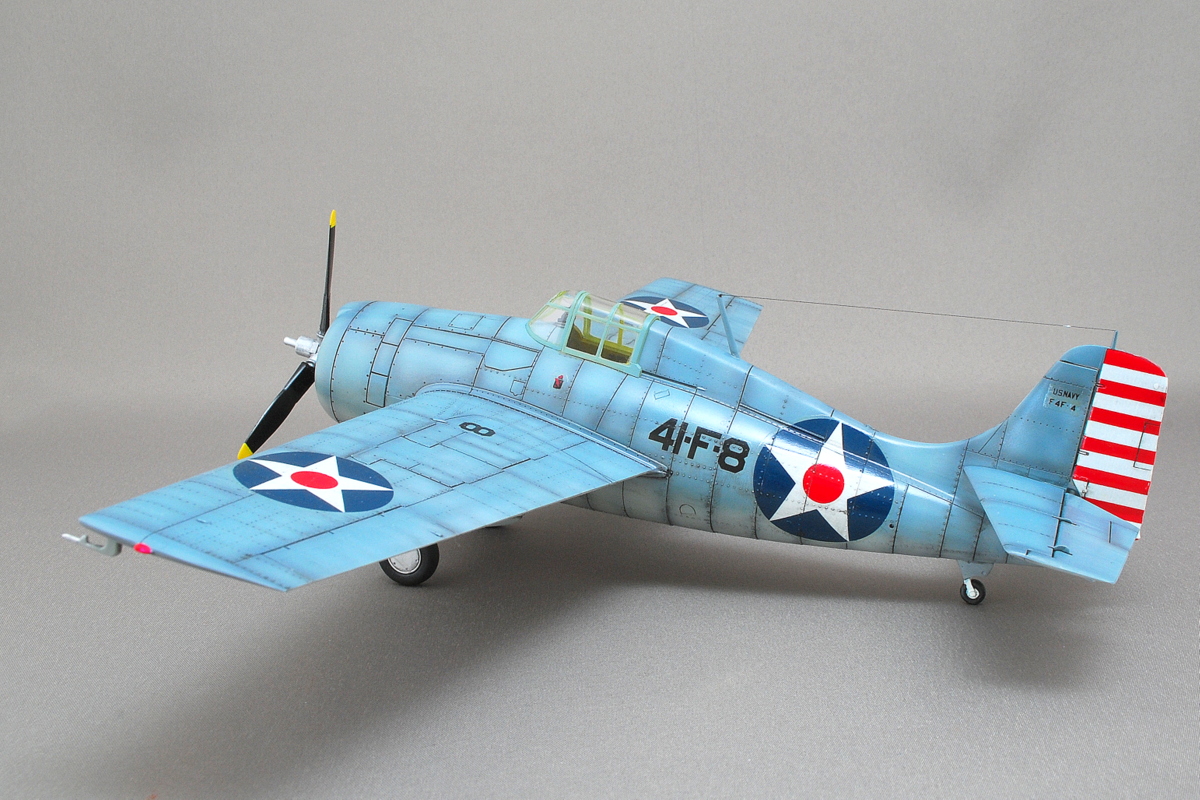 This time it is satisfactory because it was able to paint the optical sight in the center of the cockpit cleanly and it did not become dirty even after being attached. 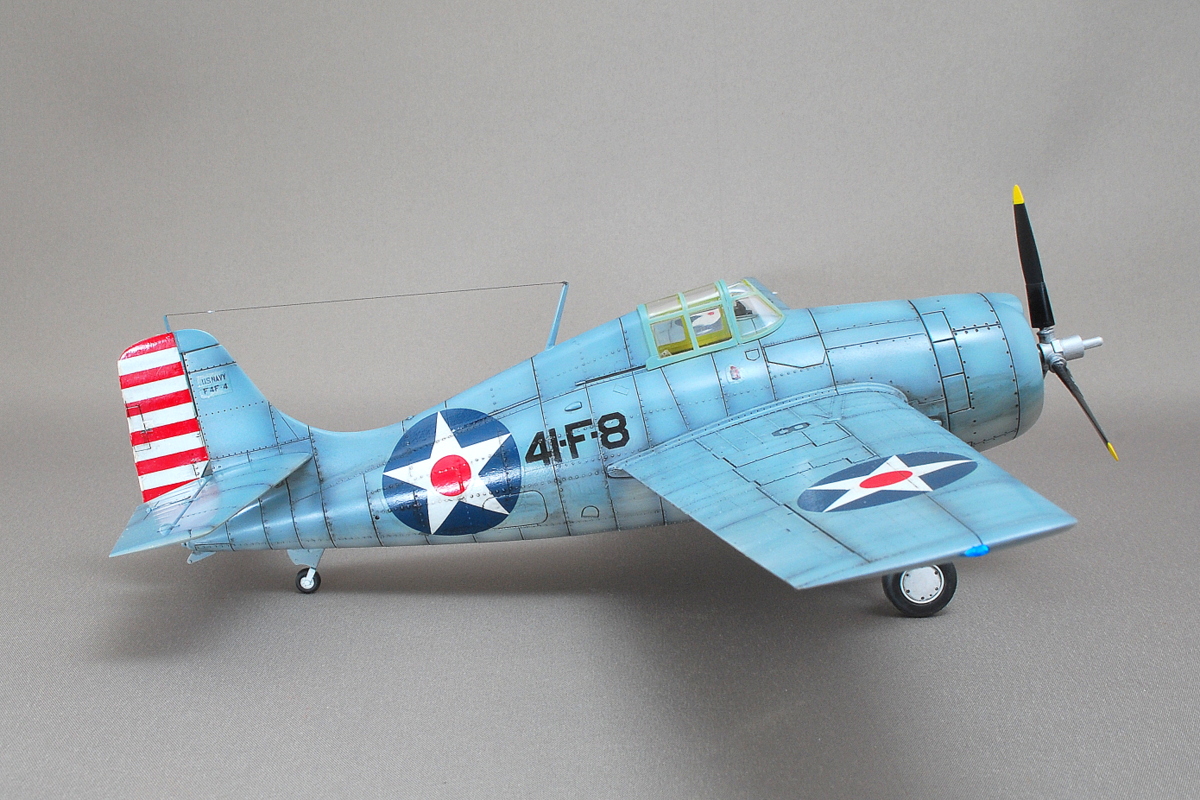 When inking in the panel lines, there are many raised rivets on the surface, it is difficult to wipe unnecessary paint. But I like it because the contrast between light and dark is clearer rather than not doing it. 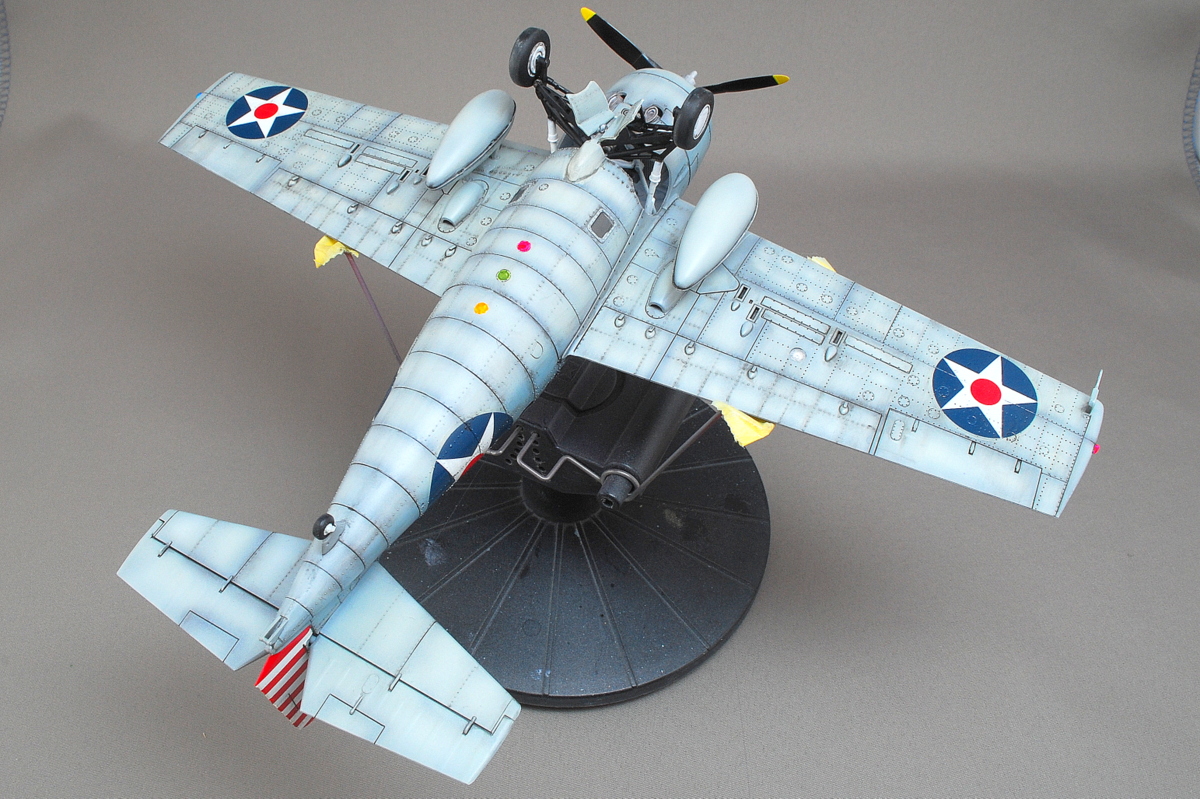 There is a part that seemed to be a bad appearance when there was a little gap when fitting the whole landing gear to the aircraft’s body, I fixed it with putty and bridged the gap. The bottom of the aircraft is also well-molded. I am thankful that the number of parts is small. 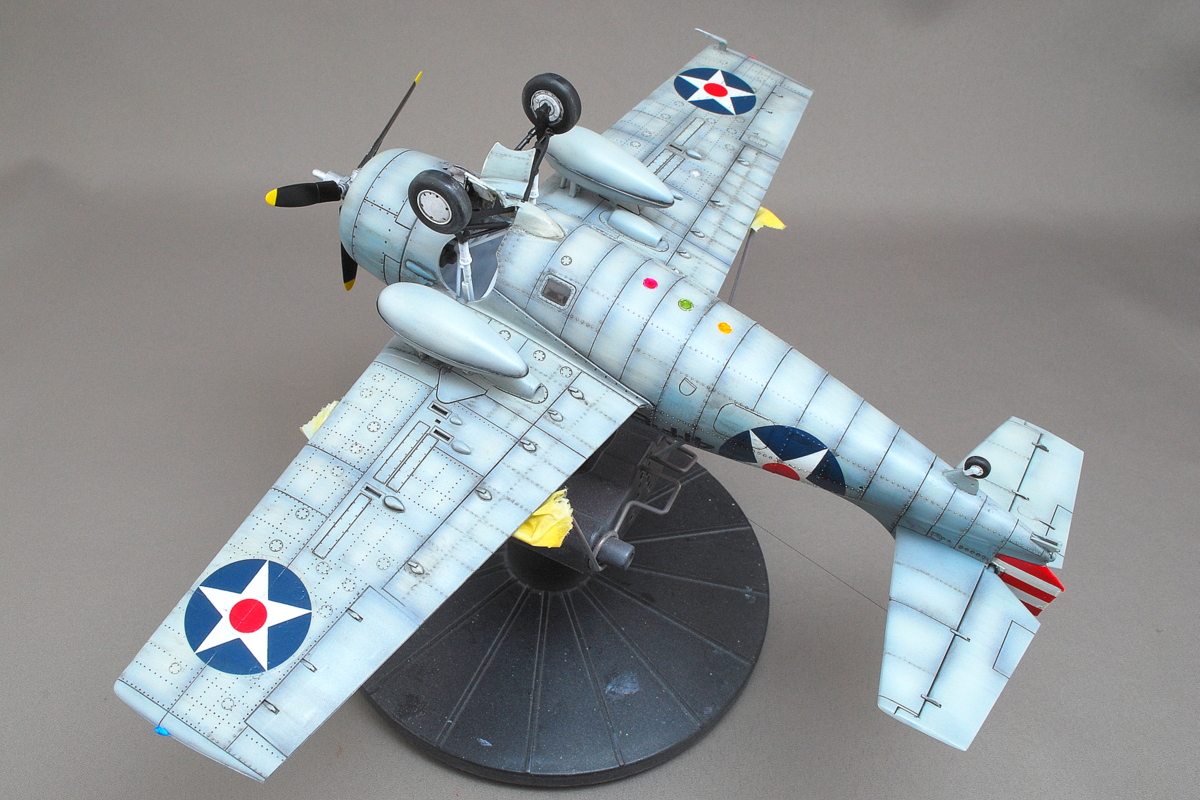 I like such kits with small but dense ones. Although it is small, it is on a 1/48 scale so it is about 25 cm at both wingtips. By the way, in the airplane model, I have hardly made 1/72. I have only three 1/72 not assembled kits, Tomcat, and 2 biplanes. If I extend the range of the scale, maybe I’m wary of the stock limit will be gone. On that point, AFV is simple for me because of no considering other scales as much as 1/35 fundamentalist. In AFV Modeler 1/35 lovers will be a majority. I think there is also a modeler to make 1/48 1/72 1/144. 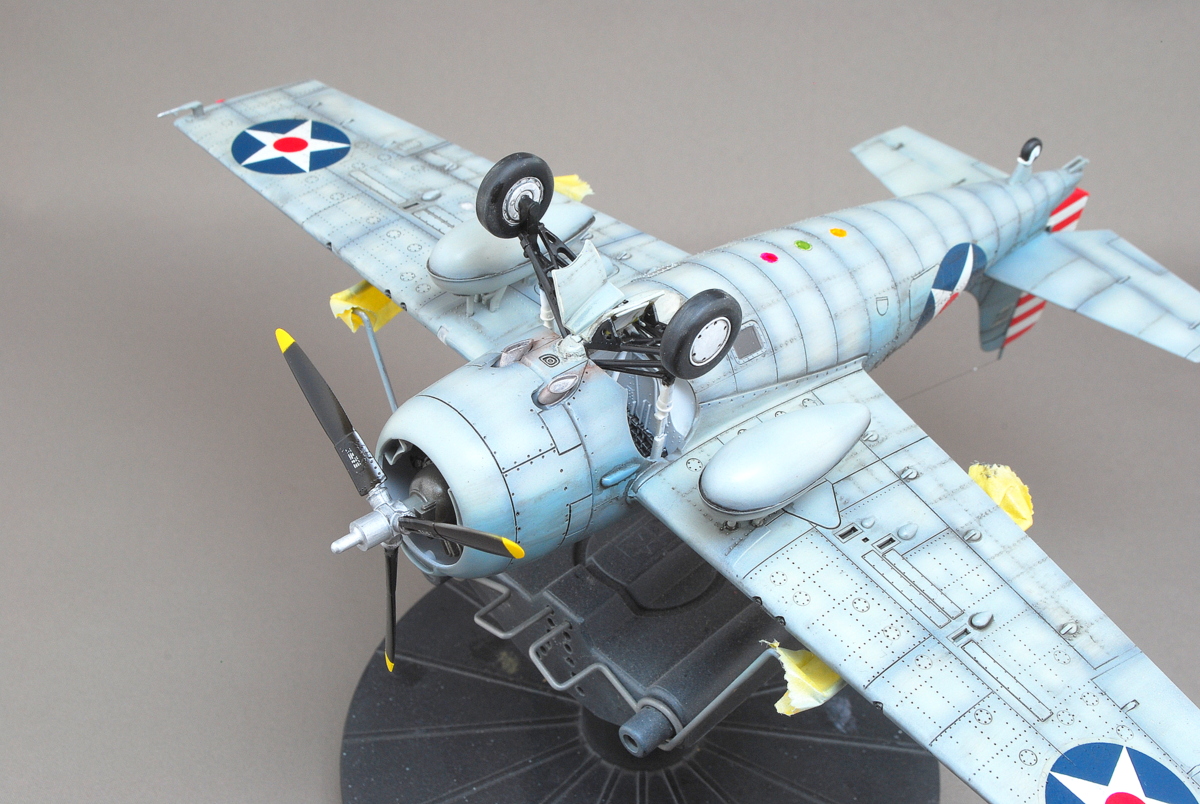 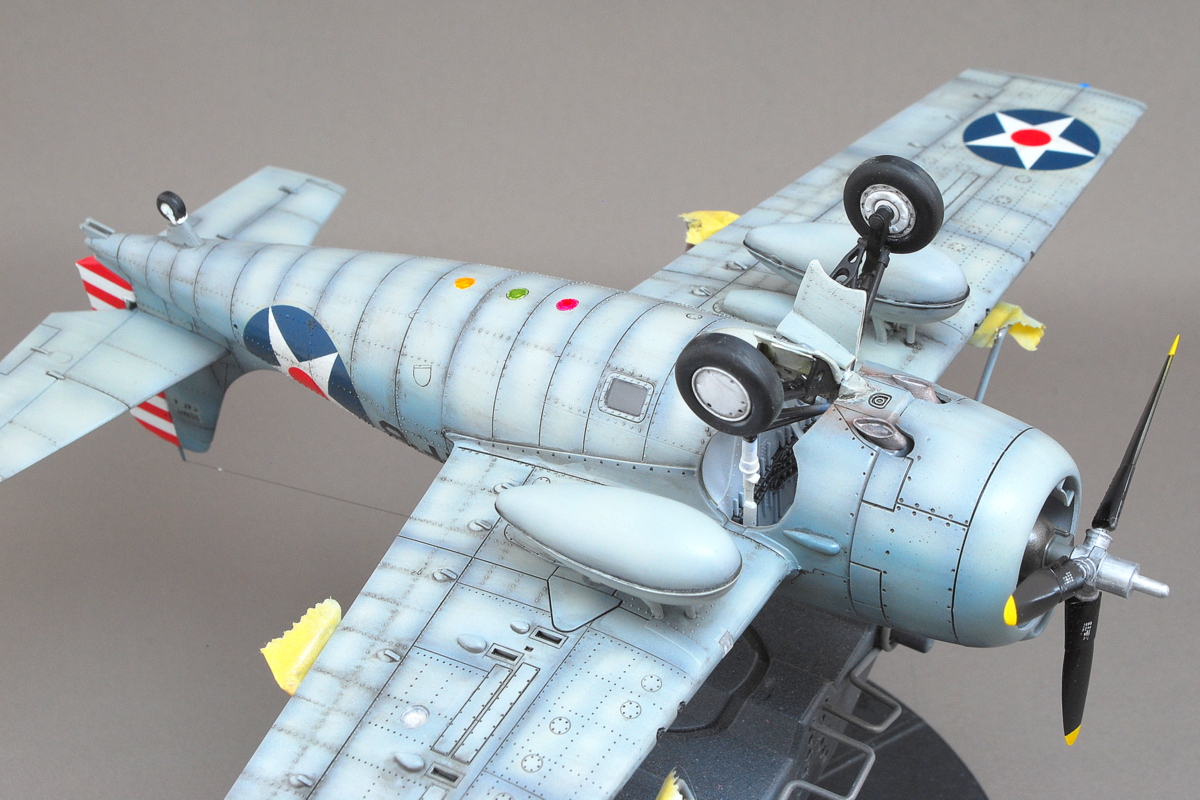 There is no flashy missile weapon as it is an early WWII fighter plane. A 58-gallon tank is attached to the left and right. The cruising distance exceeds 2,000 km, I think it was able to fight steadily at sea, although it was not as close to Zero. 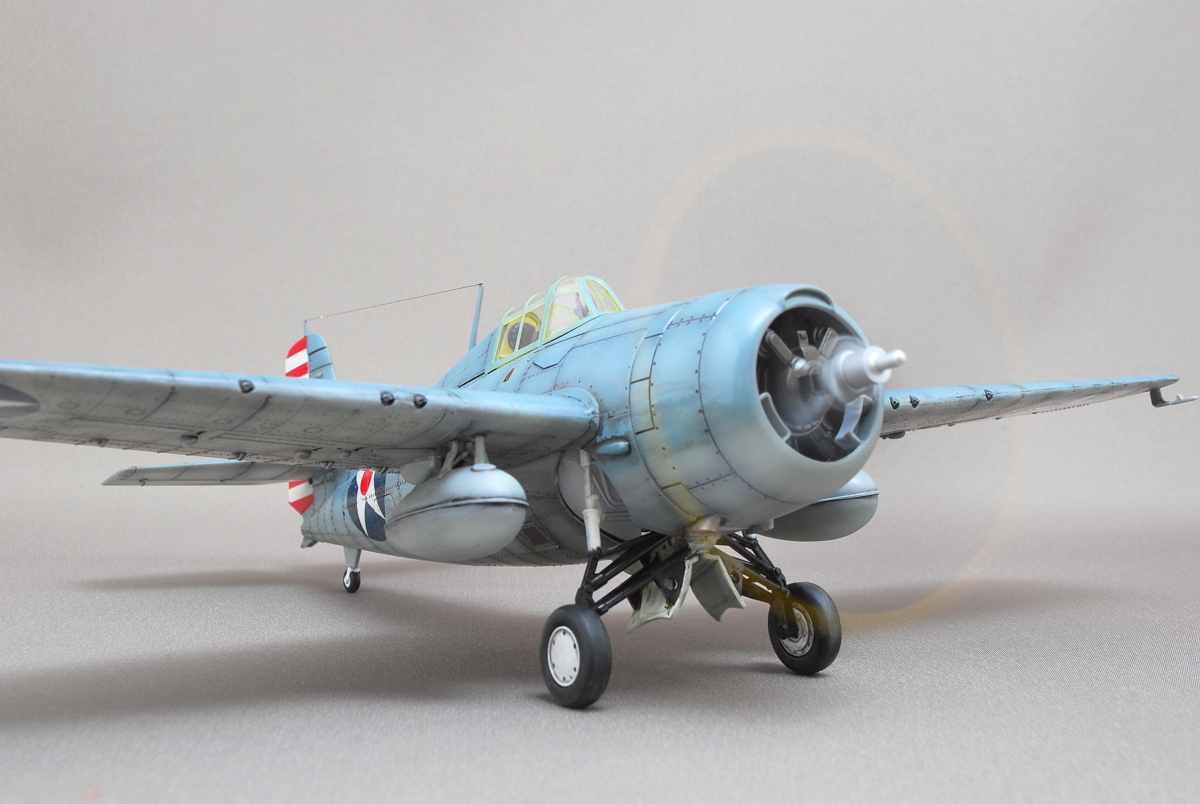 I took a photo with the propeller rotating with a little fun. It’s like preparing for takeoff. 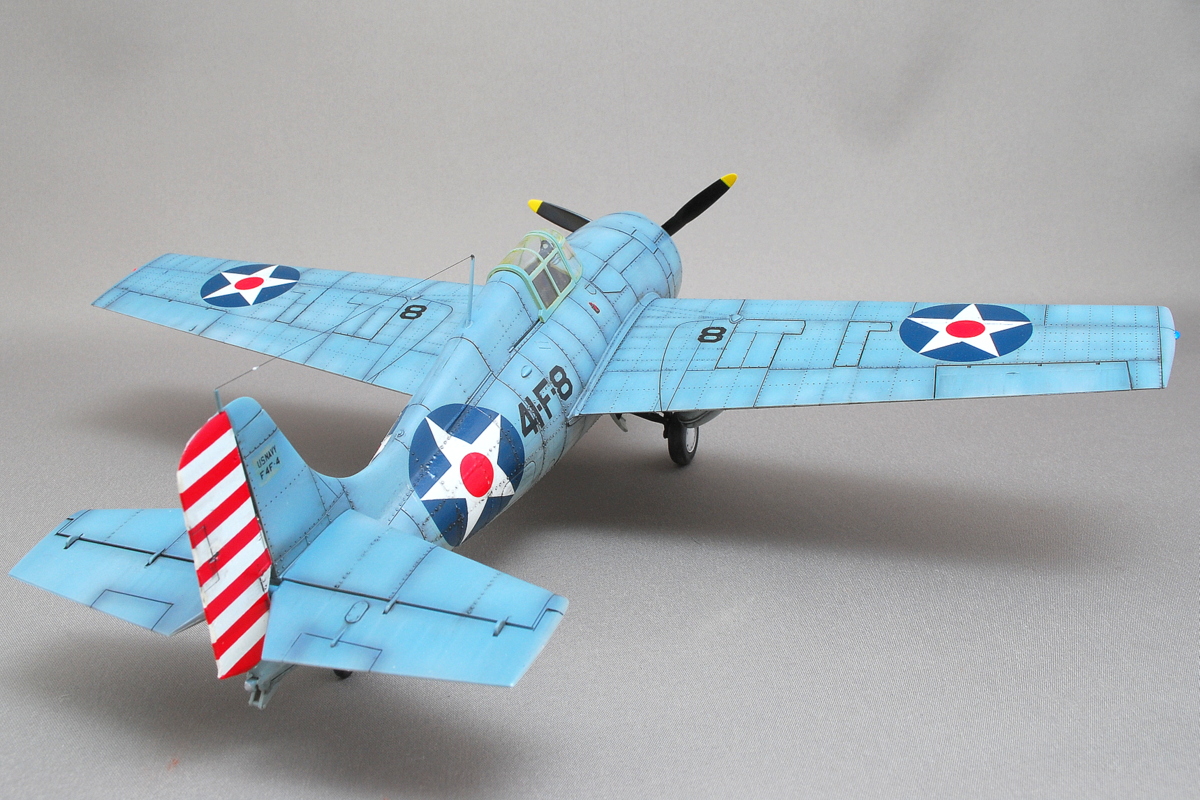 The antenna wire is a nylon thread of fishing line, standard diameter 0.053mm. It is painted black after being fixed with instantaneous adhesive. When I build battleship models, I use metal thread and nylon thread according to mood. 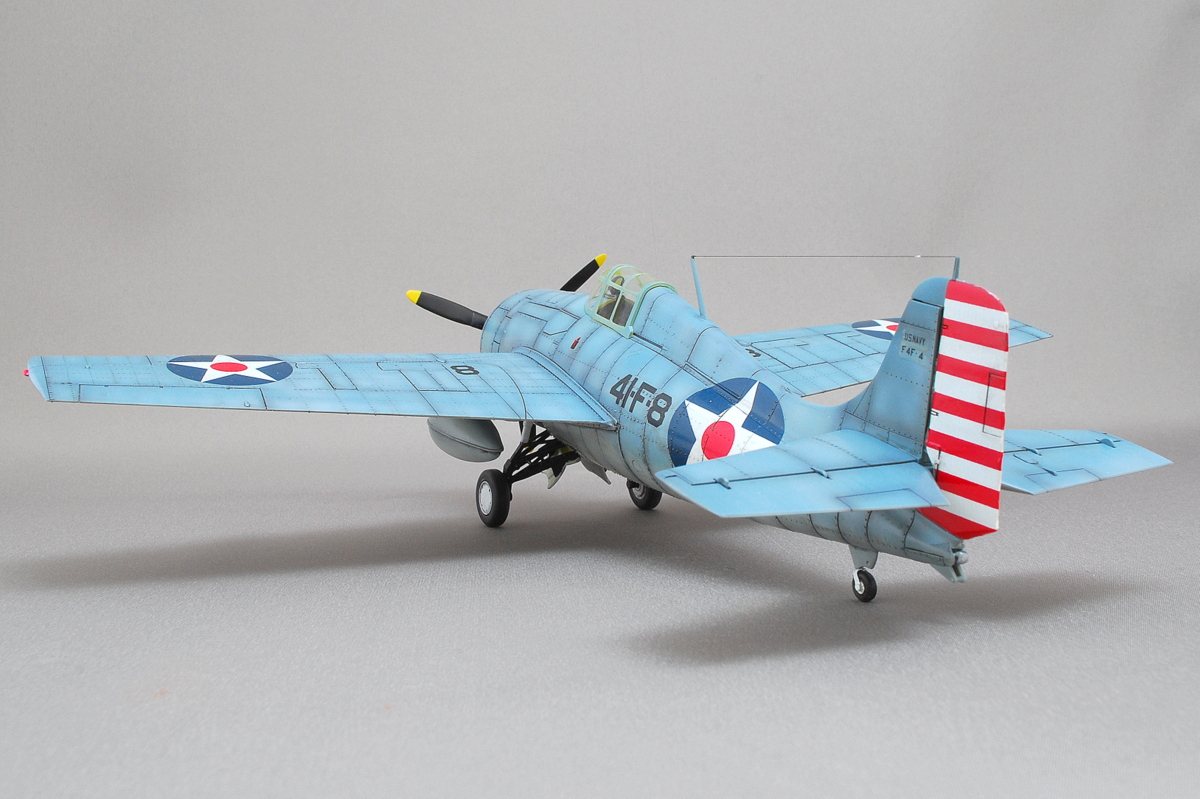 I built Tamiya’s plane a long time. It’s a pretty old kit, I did not expect Wildcat to be so easy to assemble. I think it’s a good kit.

By the way, how many kits are sent to us about the Fukimi’s lucky bag special 10000 yen (around US$80) which I ordered last week? I build hard the large box kits and leave a place but will not catch up as usual.
(20-Nov-2017)

I built the Revell F-15E Strike Eagle. I built the F-15E Strike Eagle which is 1/48 scale of the level. This is said to be the best kit in F-15E. I like it because it is easy to make, the parts match well and the mold is precise. Marking is the335th Tactical Fighter Squadron "Chiefs" 4th Fighter Wing. It's during the Desert Storm mission in the Gulf War of February 1991.

I built the F9F Panther. At first, I had the impression that the airplane was shaped like a flying squirrel and it was more ugly than I thought. The panel line and rivet marks were emphasized a little by washing, etc., and I felt it was a surprisingly beautiful streamlined airplane.

I built the Hasegawa F-104C Starfighter. On the way, the color of the main wing was wrong, and scratches were noticeable with silver paint. It is 1/48 scale and has volume and a unique shape. I enjoyed it.

This is the Hobby Boss, A-4E Sky Hawk. There are various accessories such as a bomb. The marking is U.S. Navy VC-1 (Fleet Composite Squadron One). The nickname was Blue Ali. The aircraft belonging to this unit provided training support for virtual enemy aircraft missions and onboard aircraft in target towing and fleet ECM training.

It is Hasegawa's Phantom II. I had a hard time with decals because they had been loaded for a long time. It was not in a very usable condition, so I changed it to a Microscale Decal. The marking was "Spunky VI" F-4E Phantom II - 34th TFS / 388th TFW Korat RTAFB Thailand. During the Vietnam War, this team had air-to-air missions and bombing missions from Thailand's Korat US Air Force Base.
スポンサーリンク
Savoia-Marchetti S.M.79-II Sparviero Trumpeter 1/48
Patton M48A3 Mod.B U.S. Army Main Battle Tank Dragon 1/35