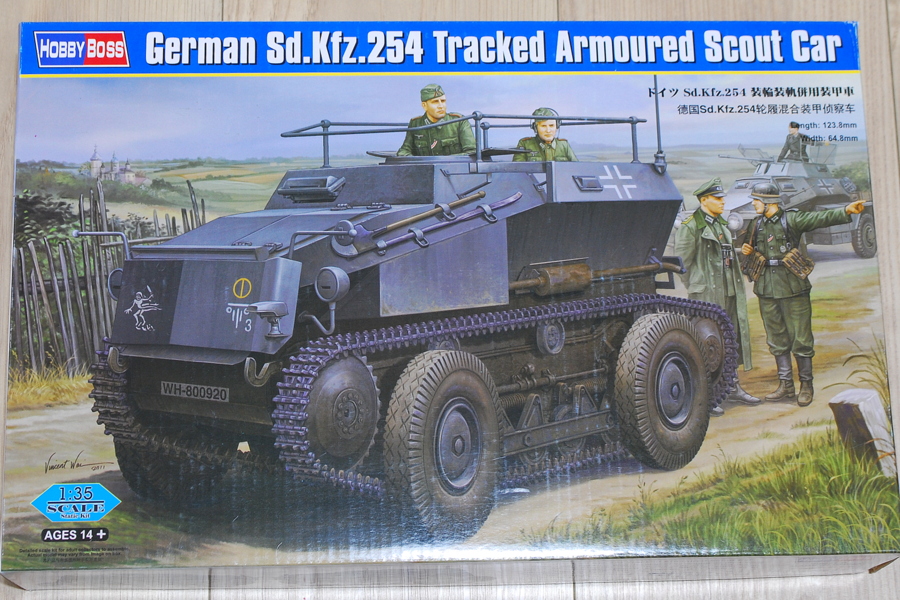 This is Sd.Kfz.254 combined with a wheeled and caterpillar-tracked vehicle. Once you see it, it is a unique form that can not be forgotten, so I think that there are a lot of interested people not only German AFV fans. It is a German armored vehicle developed and manufactured by the Saurer company in Austria. 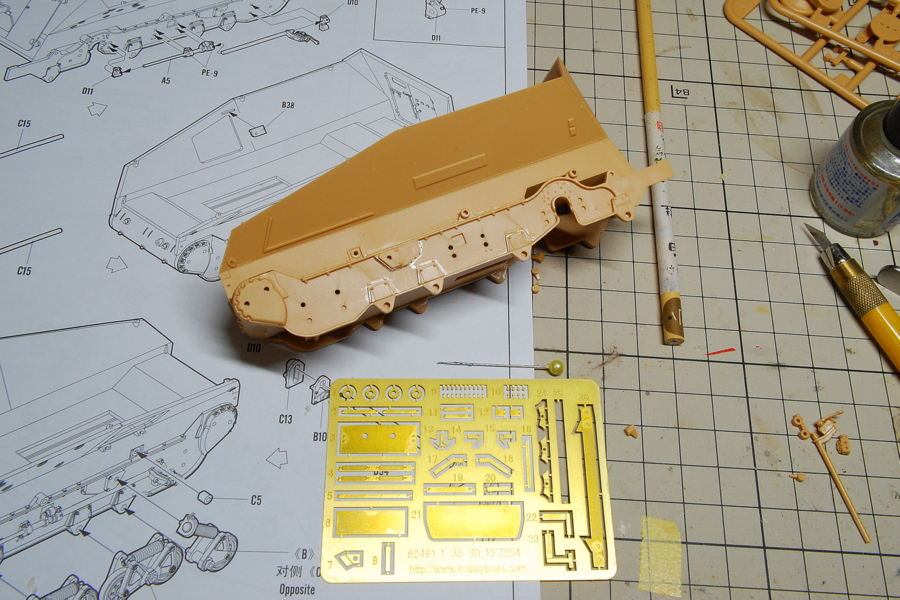 Even a small amount of photo-etched parts does not matter if the part of the plastic is precise. 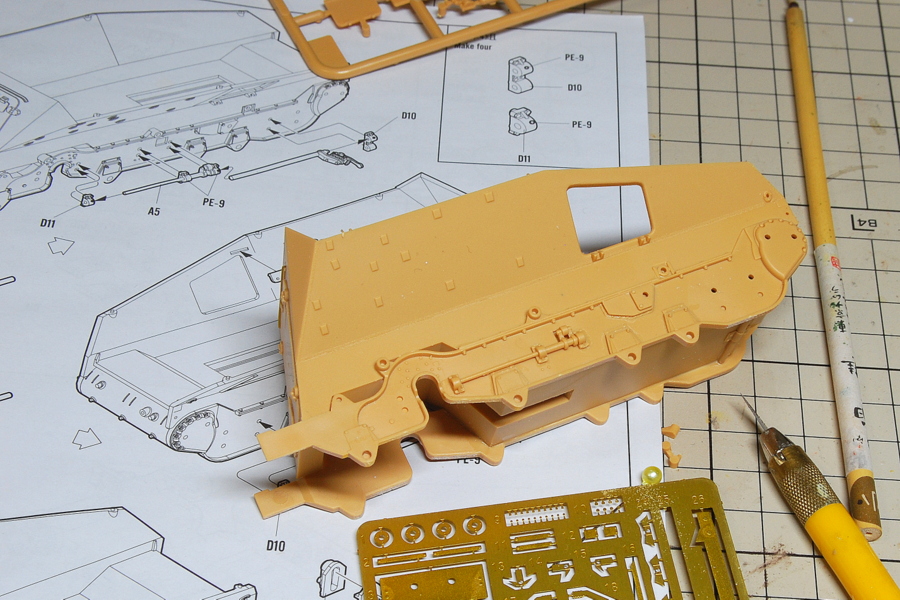 First of all, there is an assembly of the chassis before installing the wheel and suspension. 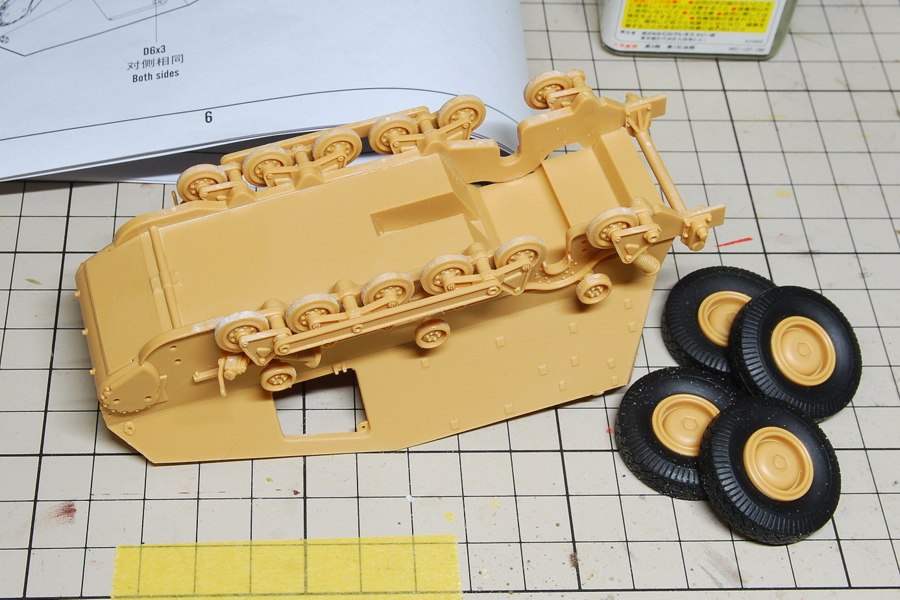 This area is a feature of this kit. It looks complicated, but it was not very difficult to assemble. 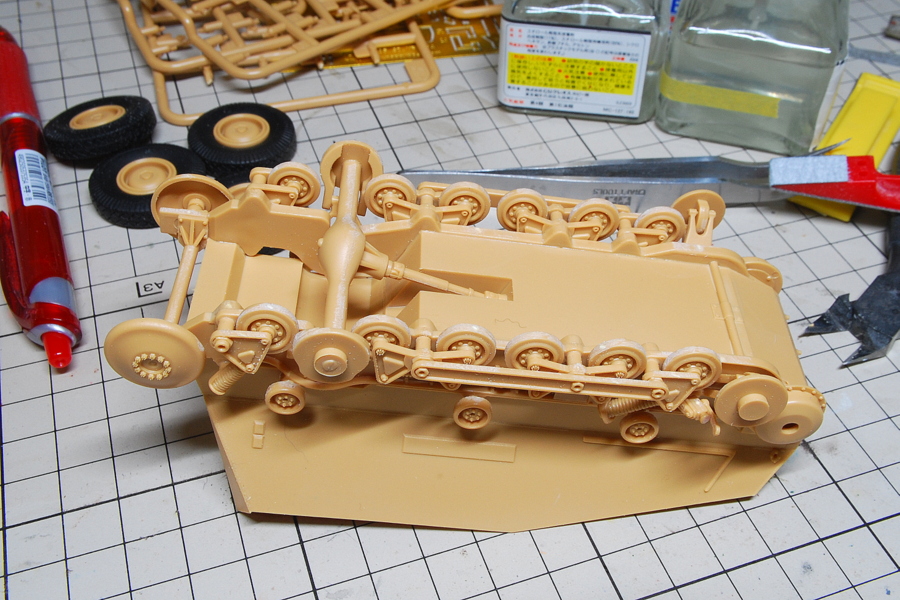 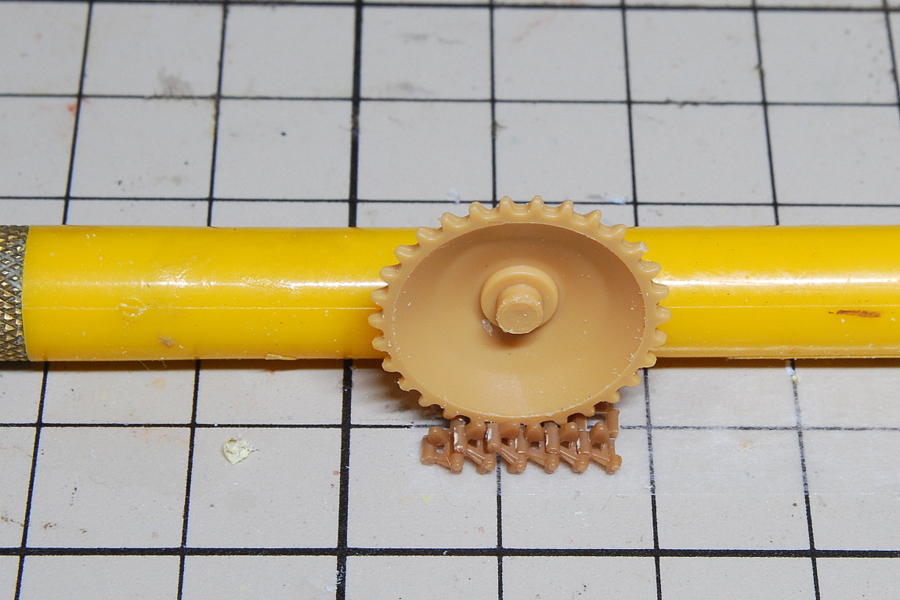 The pitches of the capstan wheel and caterpillar didn’t match many times in Hobby Boss kits. After checking this kit, it seems to be assembled without problems. That’s good.
(13-April-2018) 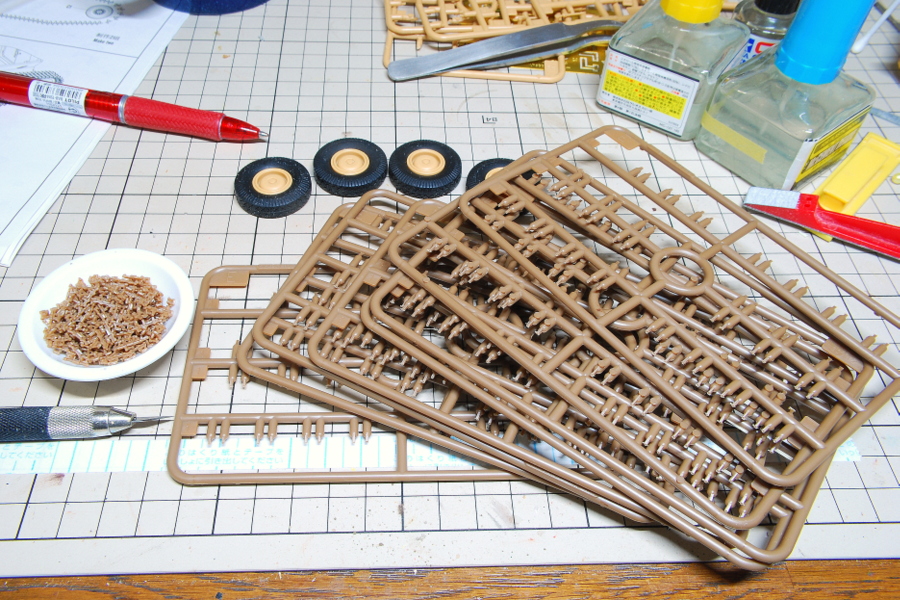 Parts of the track are cut out. It is not only in the photograph. It was still in the box a little more. It is hard to cut out. 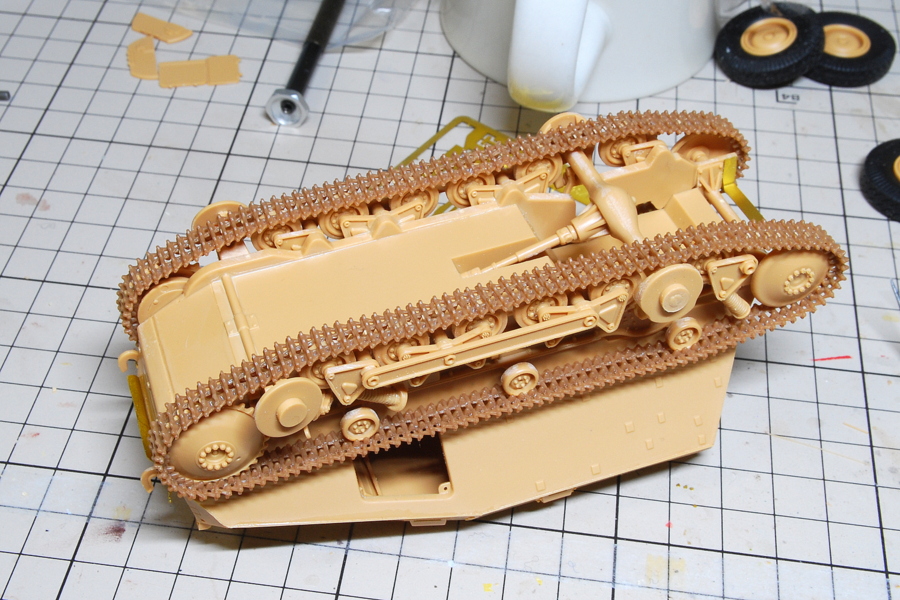 The assembly of the caterpillar was no problem at all. Very easy to assemble, easy to separate parts. The number of caterpillar parts is sufficient, it can be recovered even if there are malformed or lost. 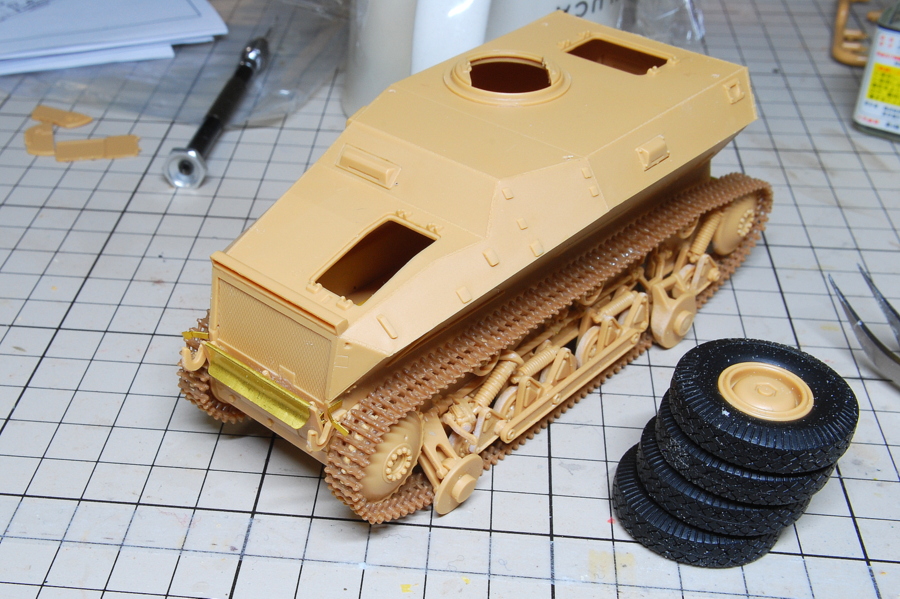 I installed a caterpillar according to the instructions of Hobby Boss, is not the direction of the caterpillar reversed back and forth? I attached the tire and have hardened the caterpillar tread with adhesive strongly… 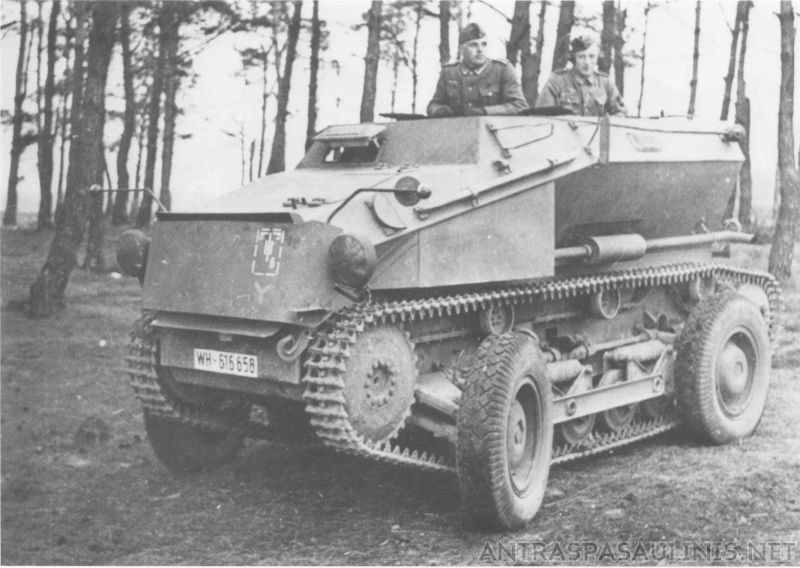 As you can see the original picture of a package painting, after all, it is! Well, the direction of the caterpillar is different. Hobby boss has a lot of traps, I believed it and it was stupid. 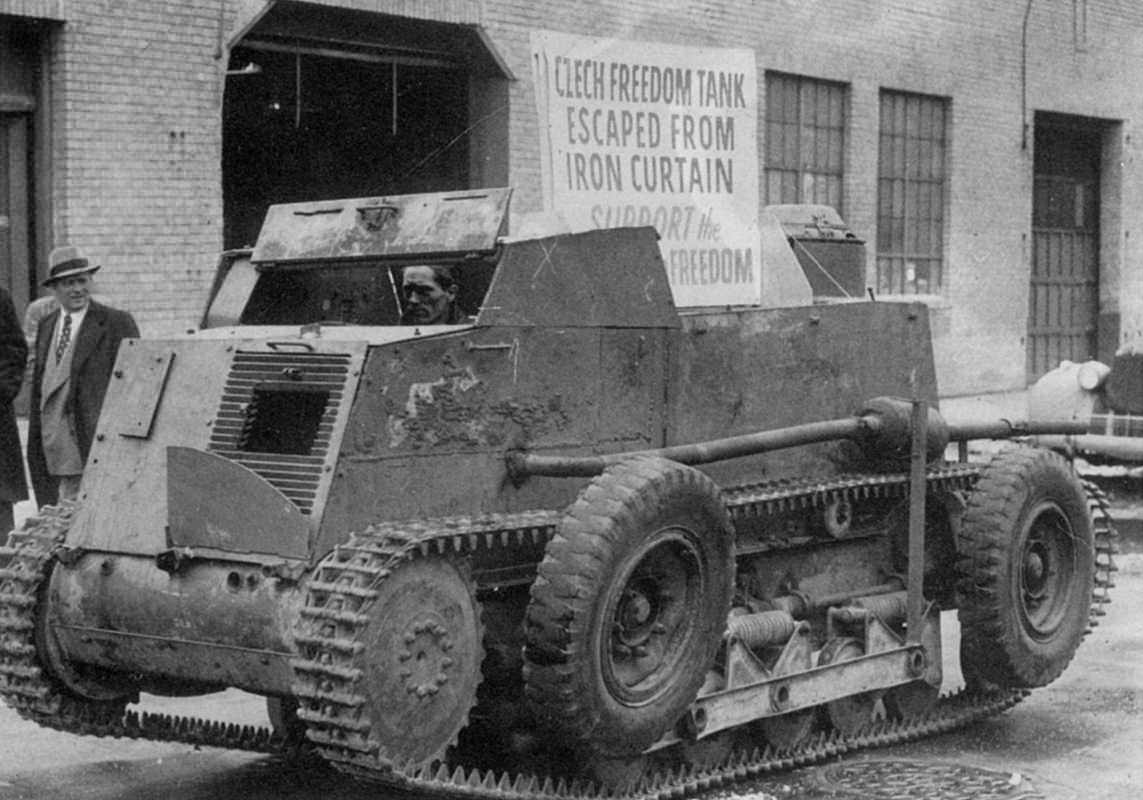 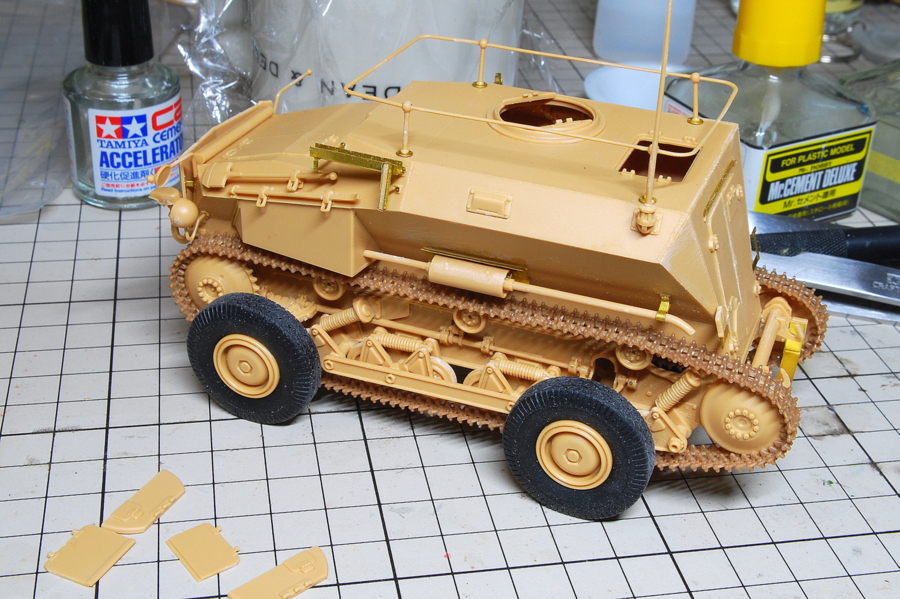 Assembly was completed. The loop antenna, vertical antenna, rearview mirror, headlight, etc. many parts are easily damaged. I finished it as durable as possible by using the adhesive for plastics and instant adhesive in combination. 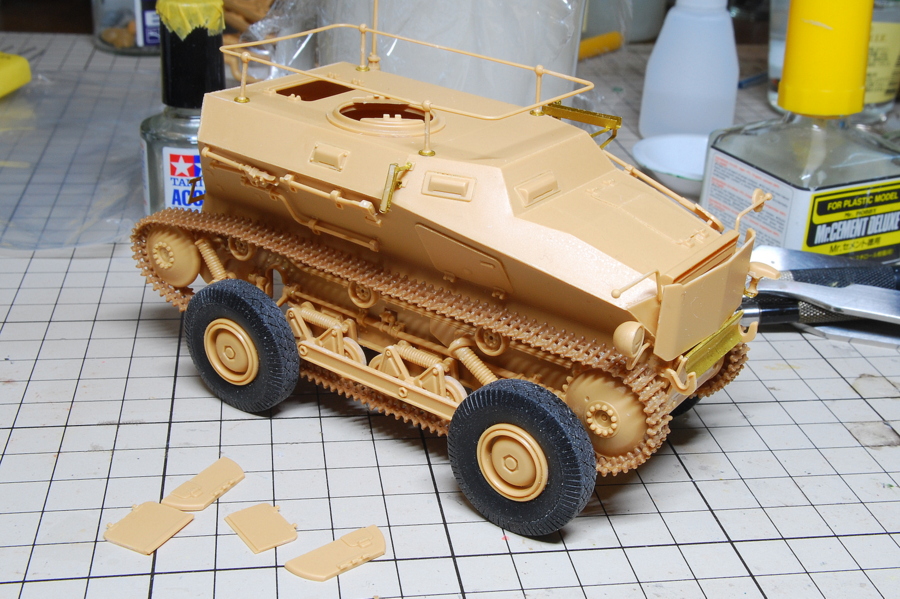 There was a part where I can not figure out how to assemble by just looking at the instructions such as the armor plate in the front part of the vehicle and the backside of it. It may be a mistake. 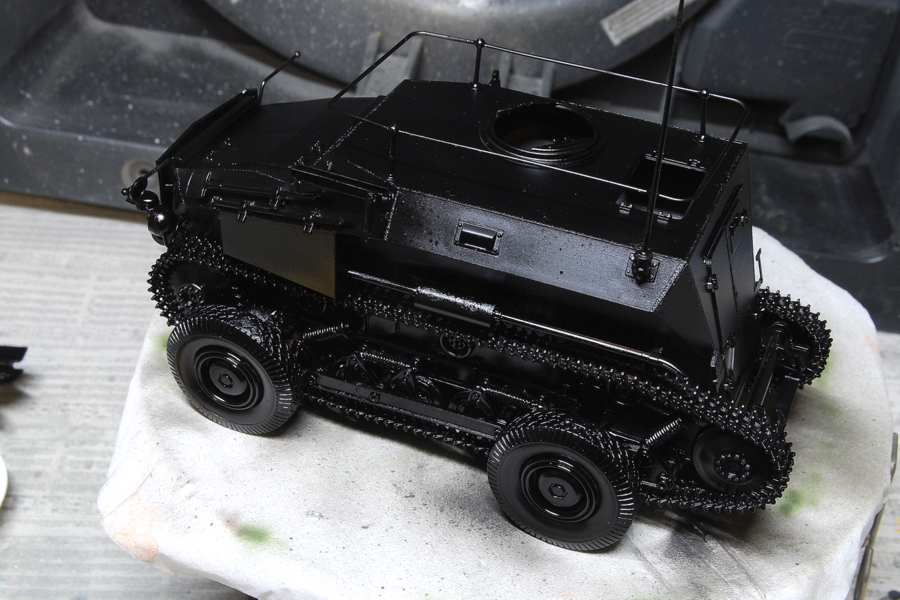 The lower half is a pretty intricate structure so I will pay attention that there is no paint remaining on the airbrush. While I’m doing weathering in various ways, I think that the remaining paint will disappear. 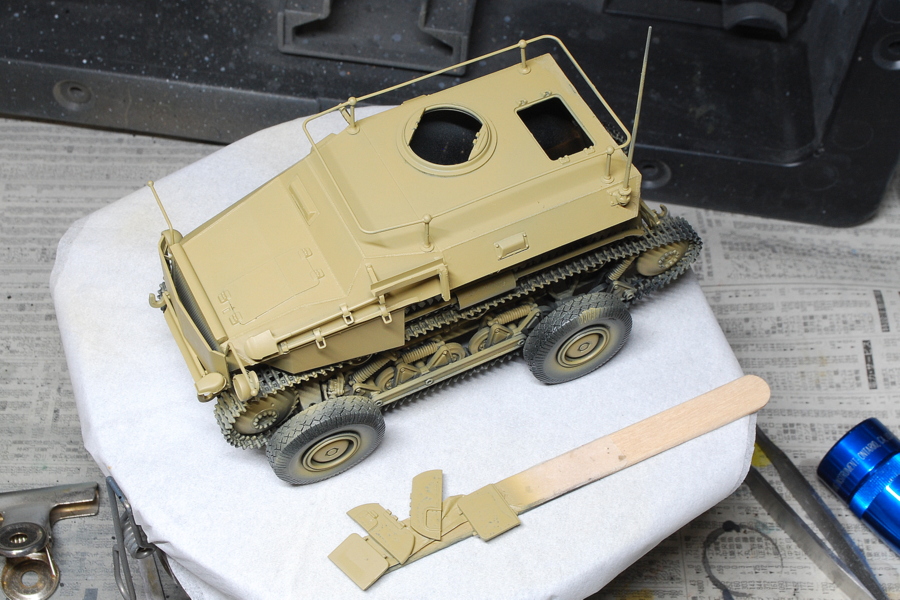 I painted it with dark yellow as the Afrika Korps vehicle. 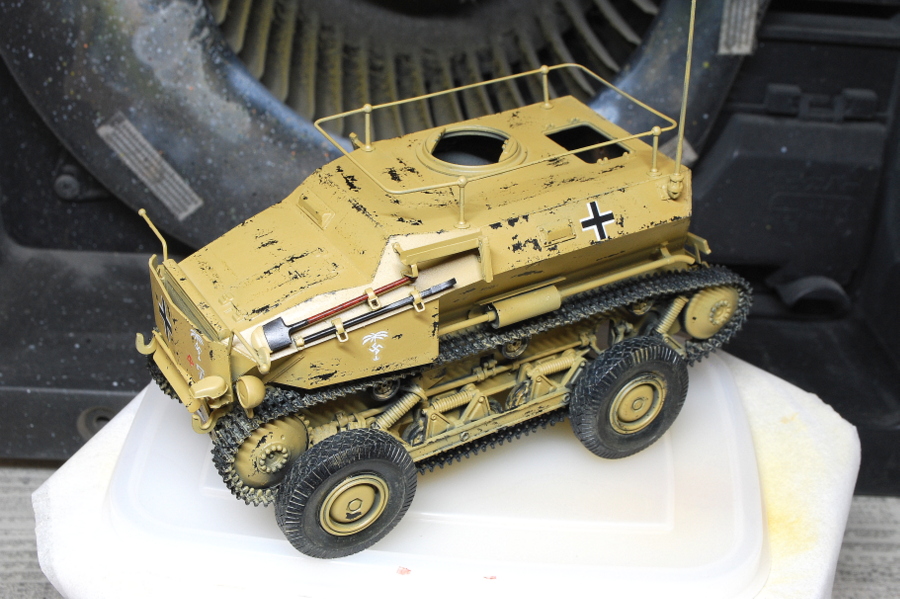 I pasted the decals, so it is completed by weathering a little more.
(17-April-2018) 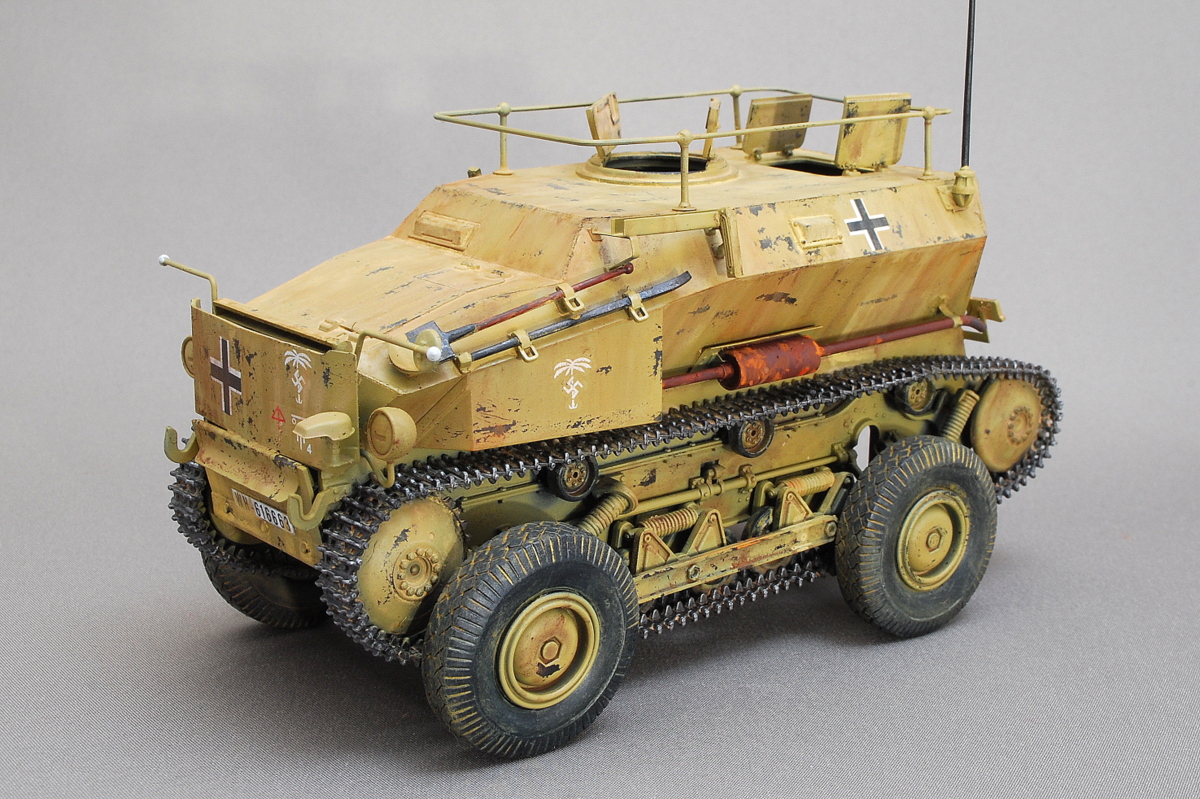 This Sd.Kfz.254 was manufactured by Saurer and the total production number was 128. It was used as an artillery observer and a reconnaissance car. 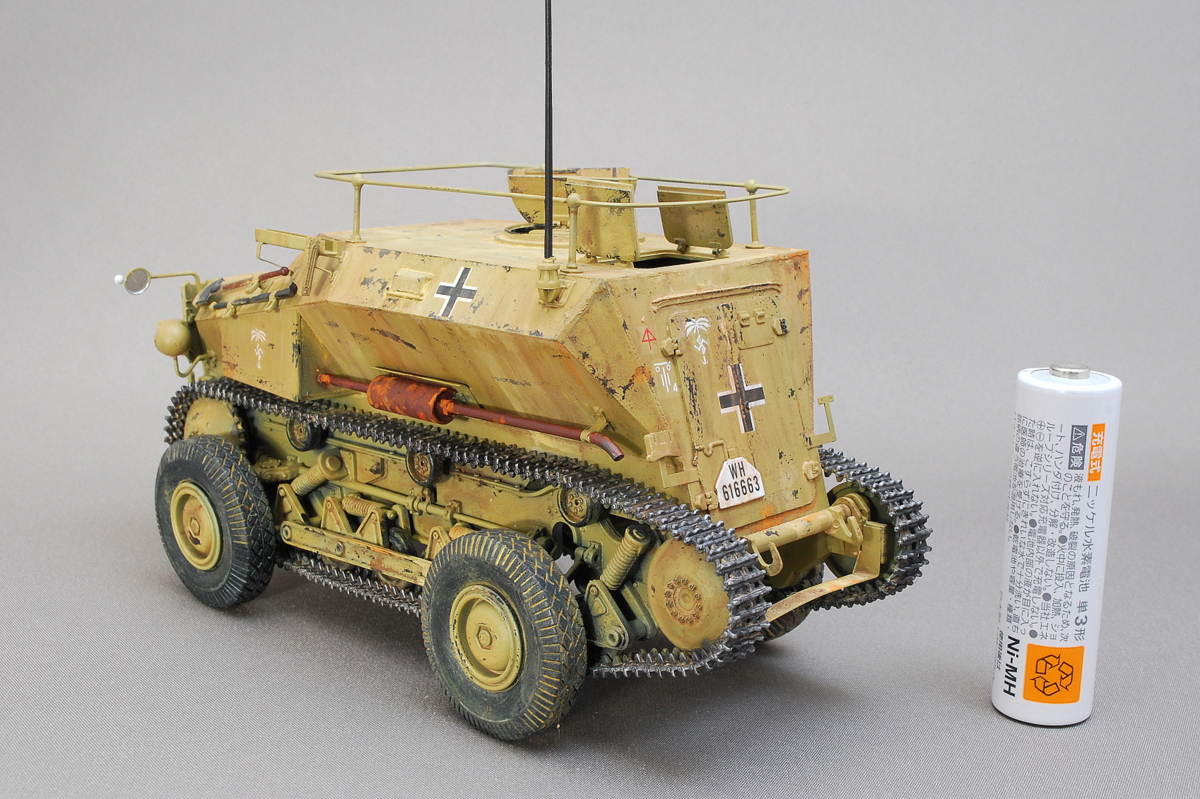 Even now, tanks are required vehicles and railroads when traveling a long distance, so it seems quite useful at first glance that this caterpillar and tires vehicle will be useful. 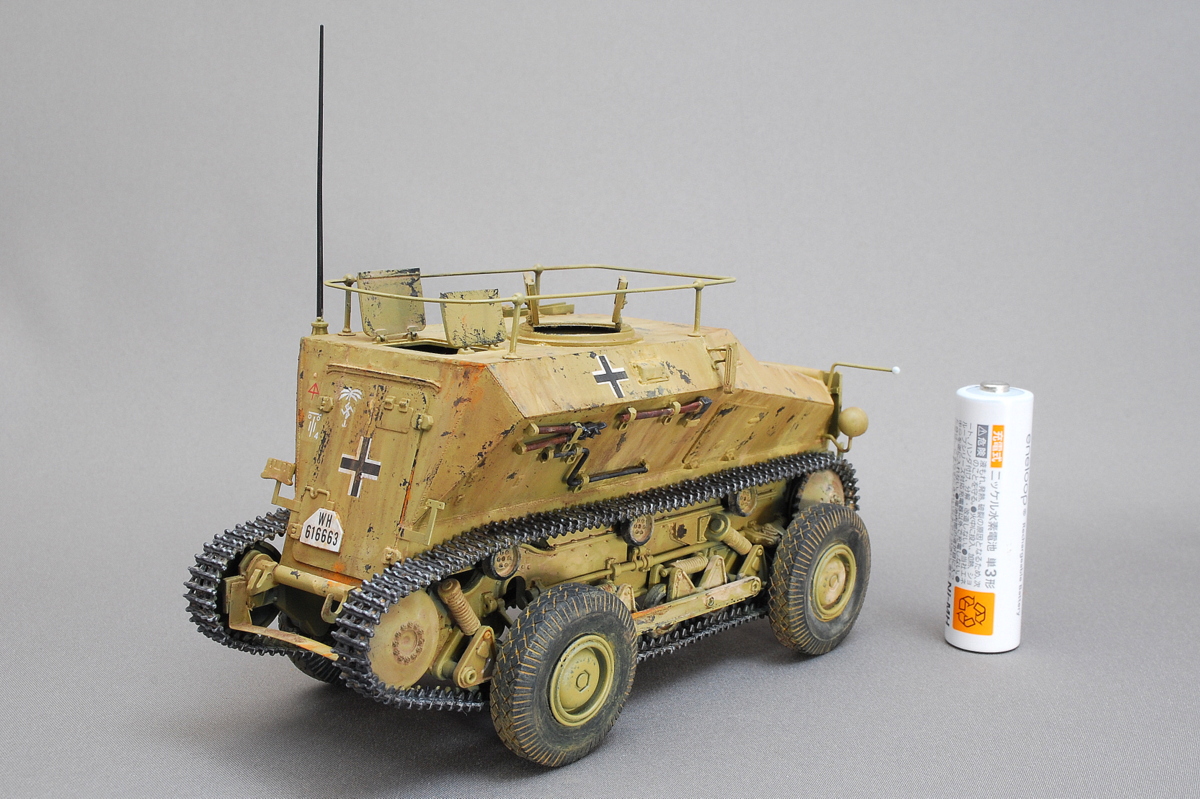 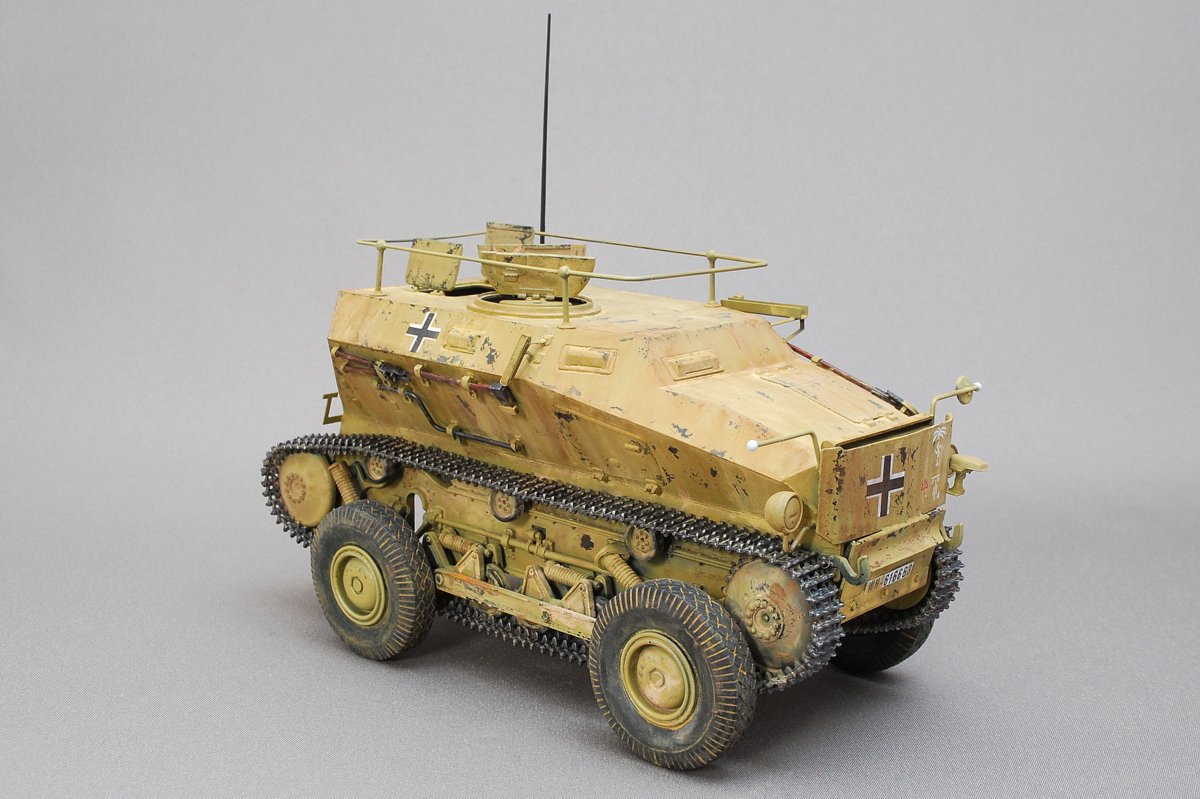 Although no conspicuous gap occurred, to match the joint of the polyhedron body, I filed the burr to smooth the surface. 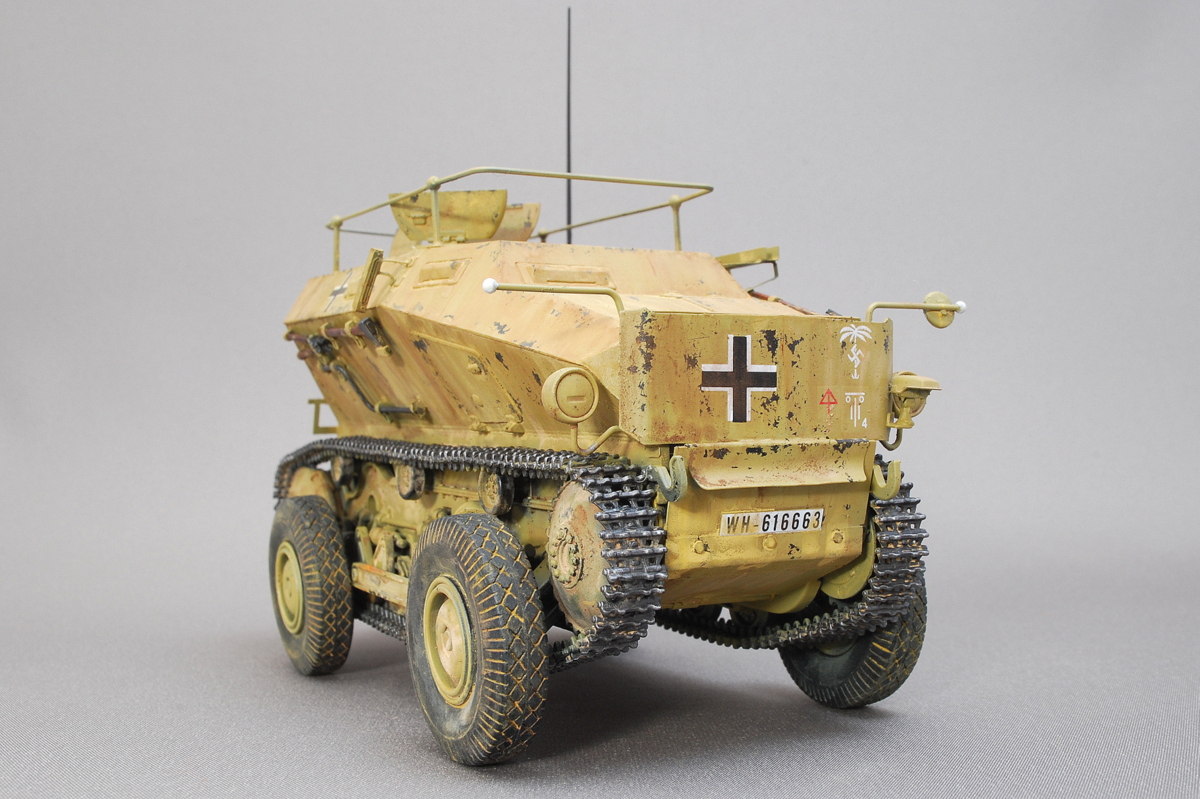 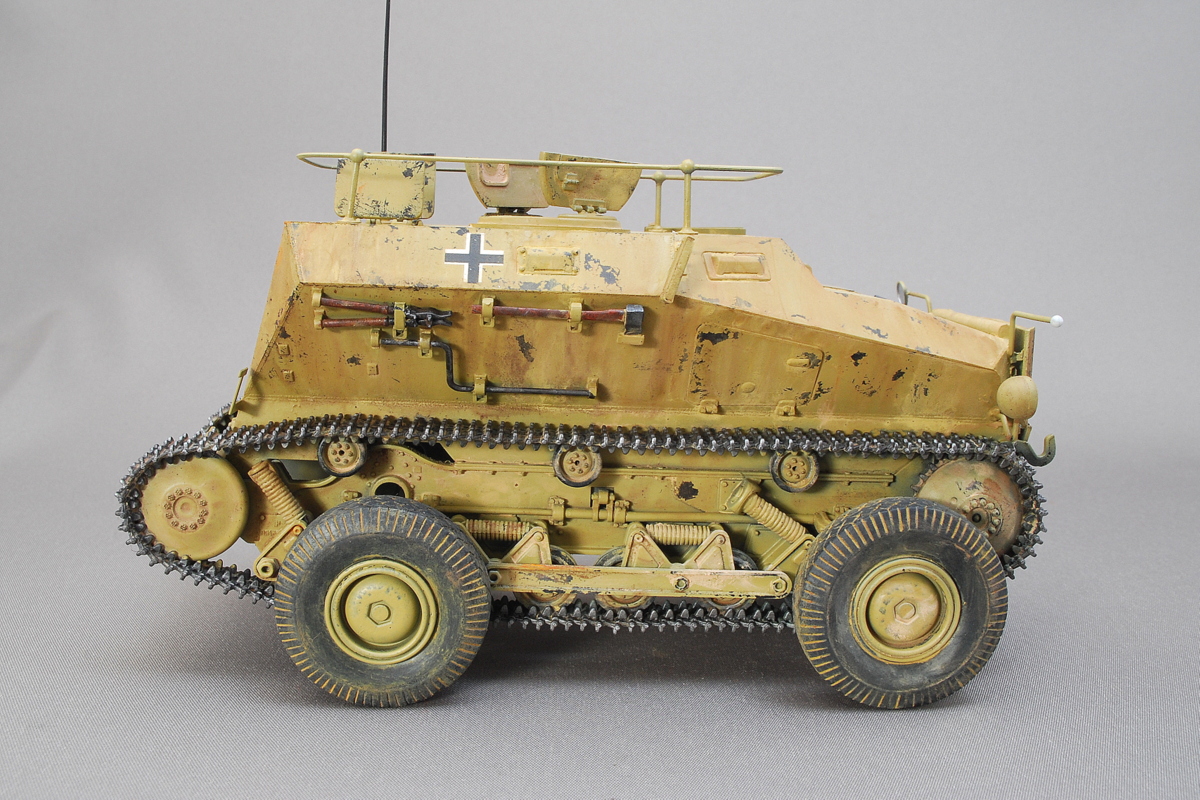 I can choose a state of caterpillar running and the position using the wheel, and it’s a movable structure. However, it is better to fix it to obtain strength. I made it in the four-wheel running state. 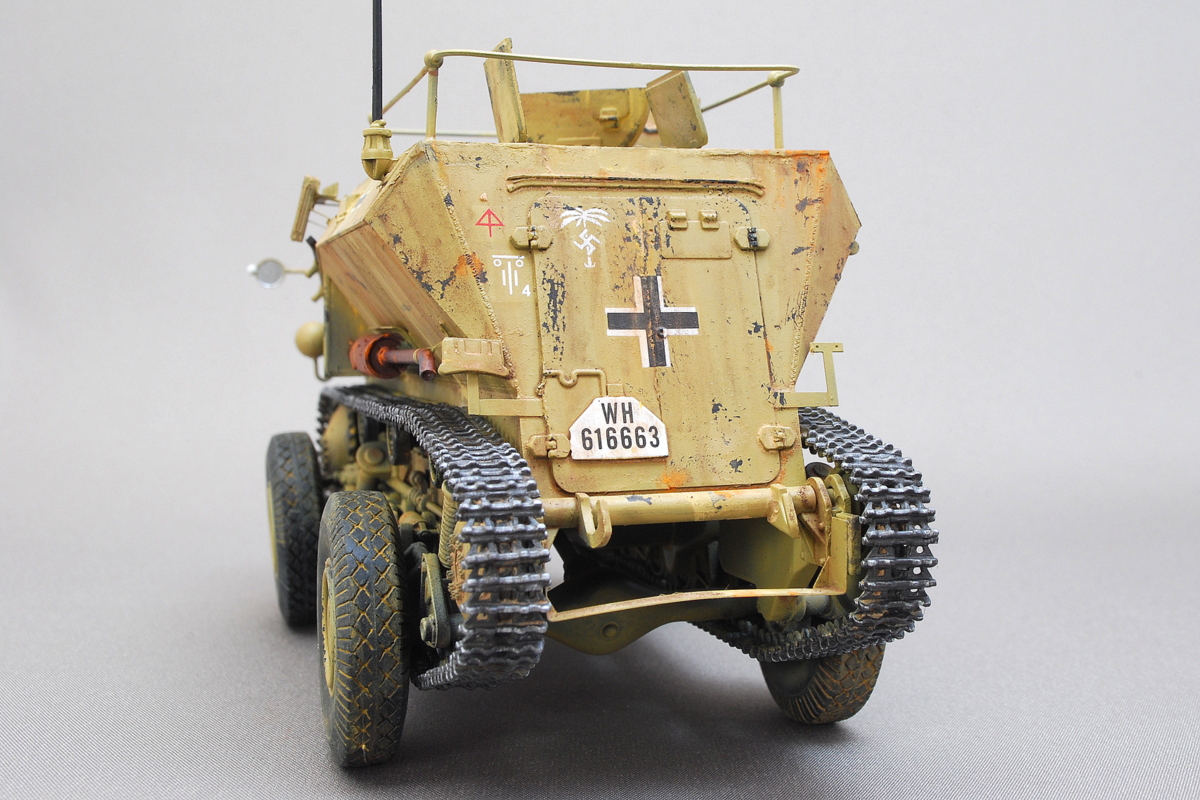 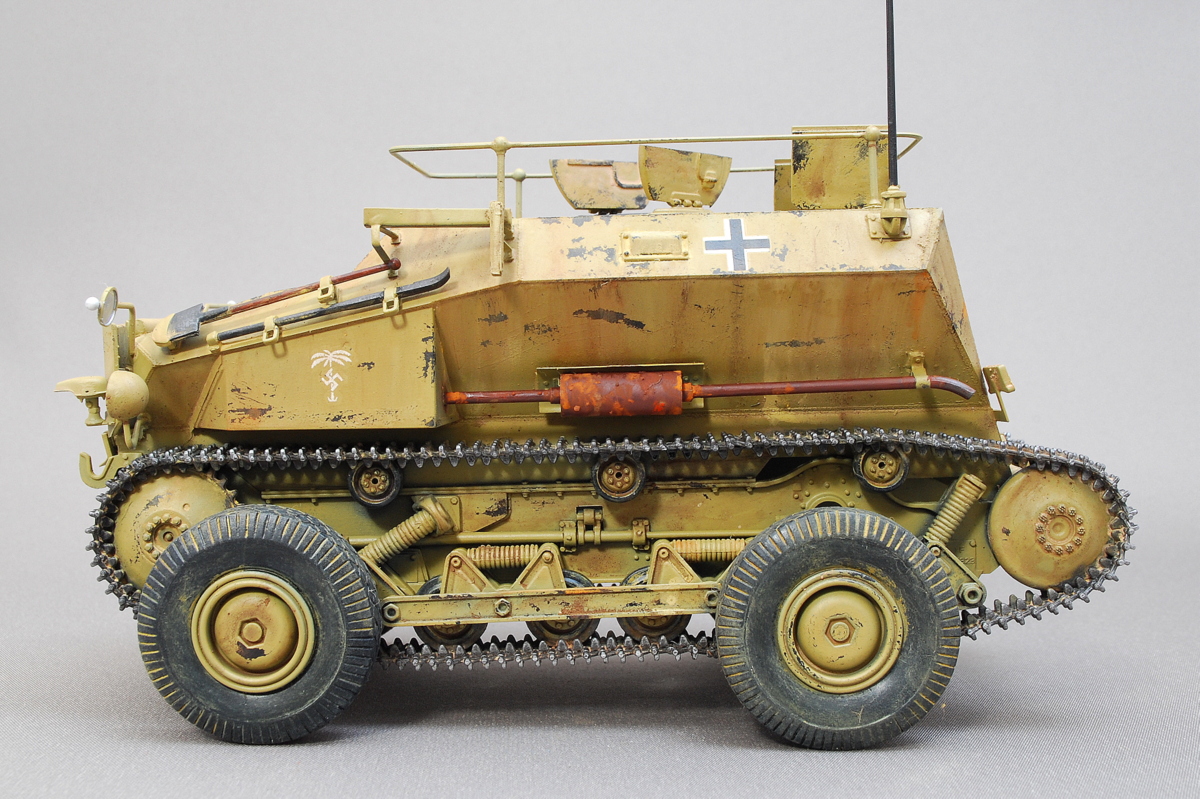 In assembly, the tire running condition, the suspension was lowered and fixed with glue firmly. This adjustment was surprisingly difficult. It is a very peculiar AFV. 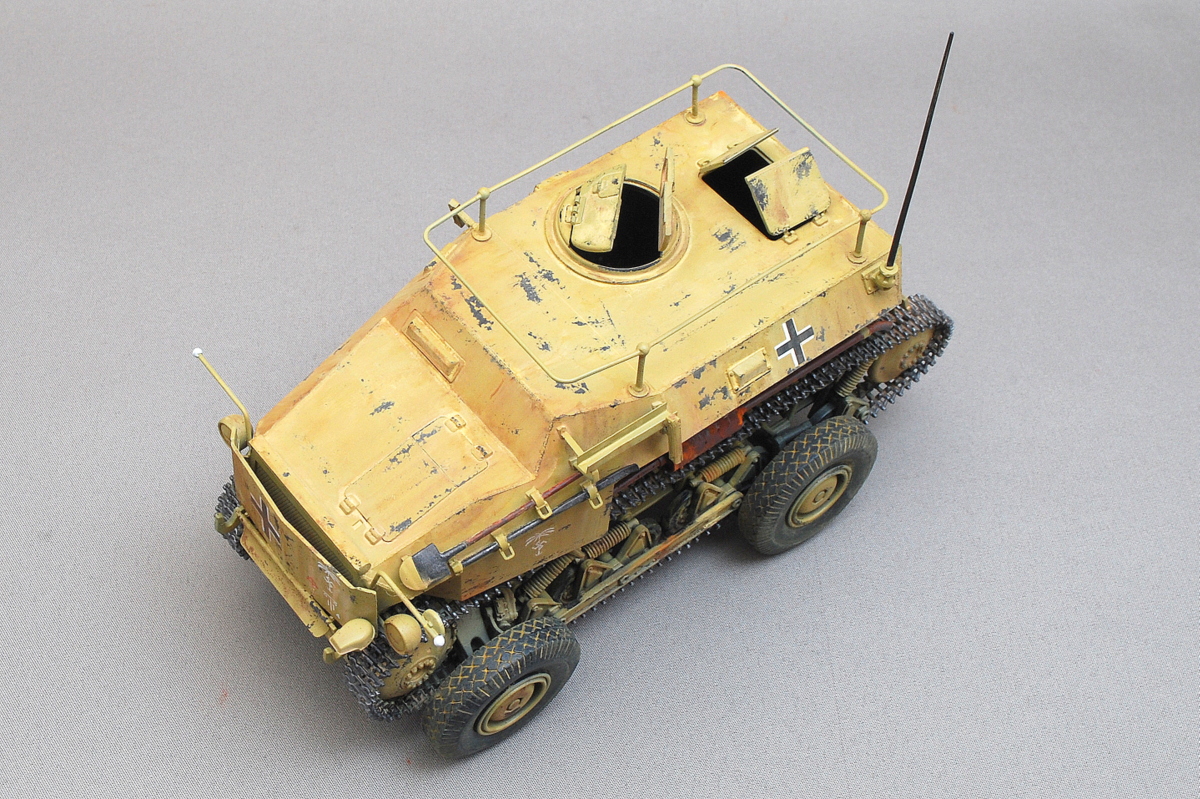 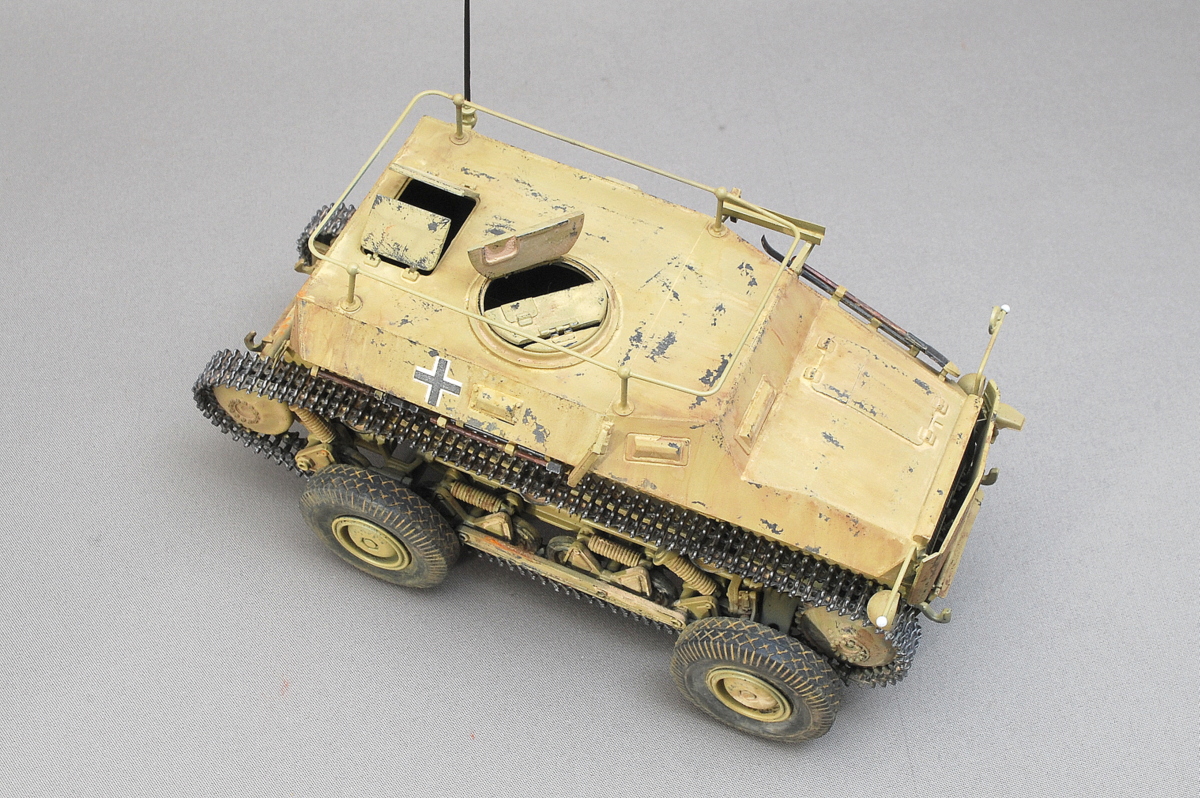 A hatch doesn’t glue, opening and shutting together as both are possible. I would like to set a German tank crew on it later. 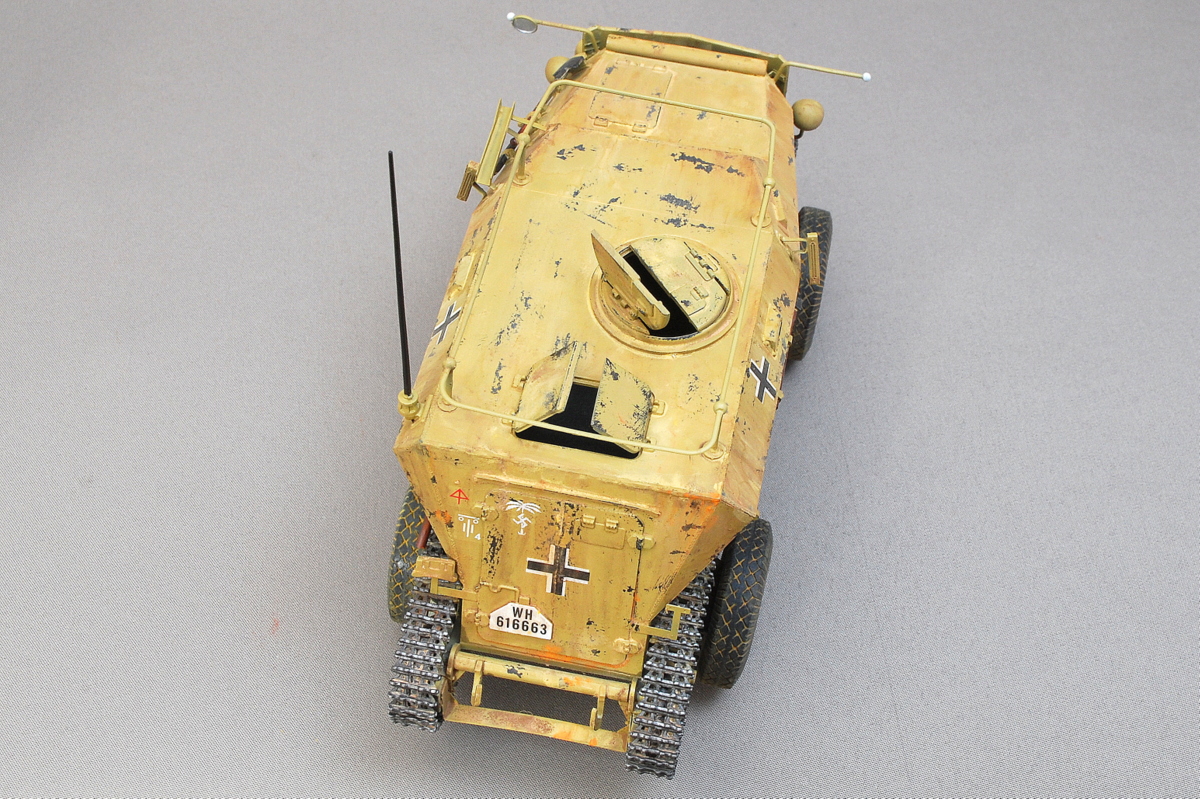 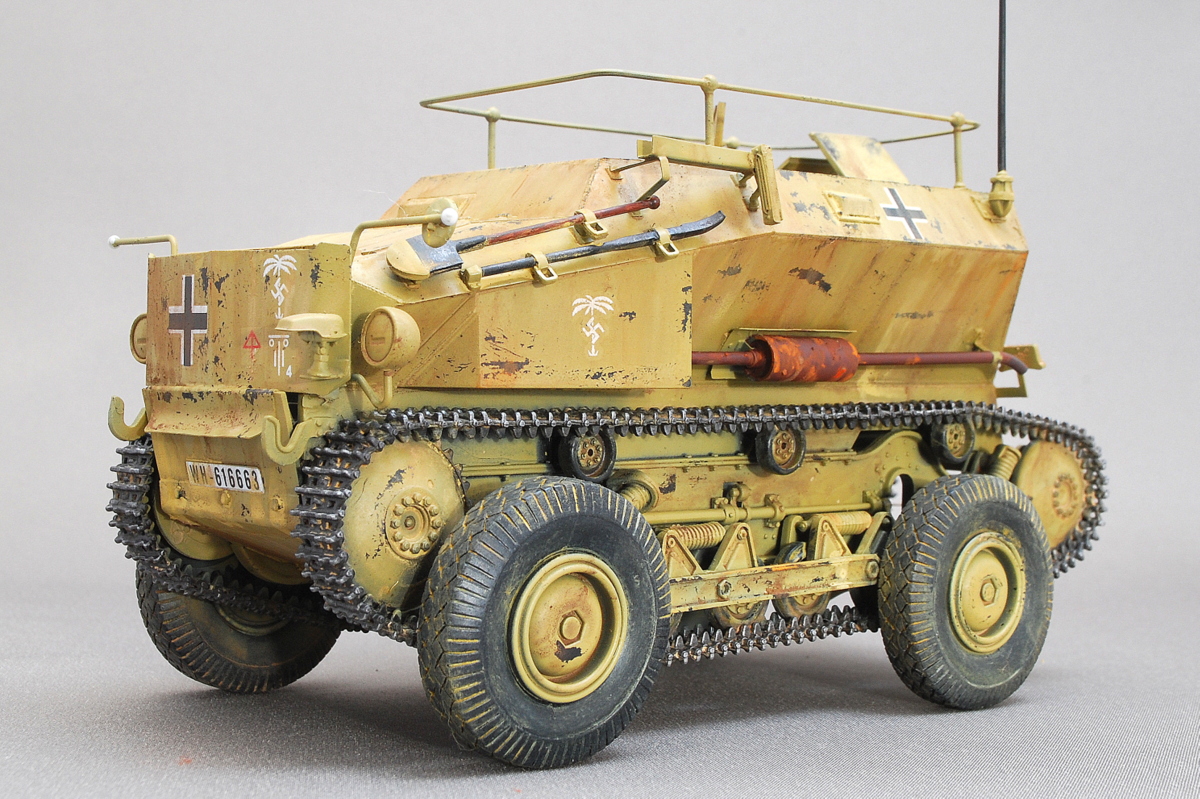 The position of the tire running is unusually high in the car height, it is likely to roll over as the crosswind blows. 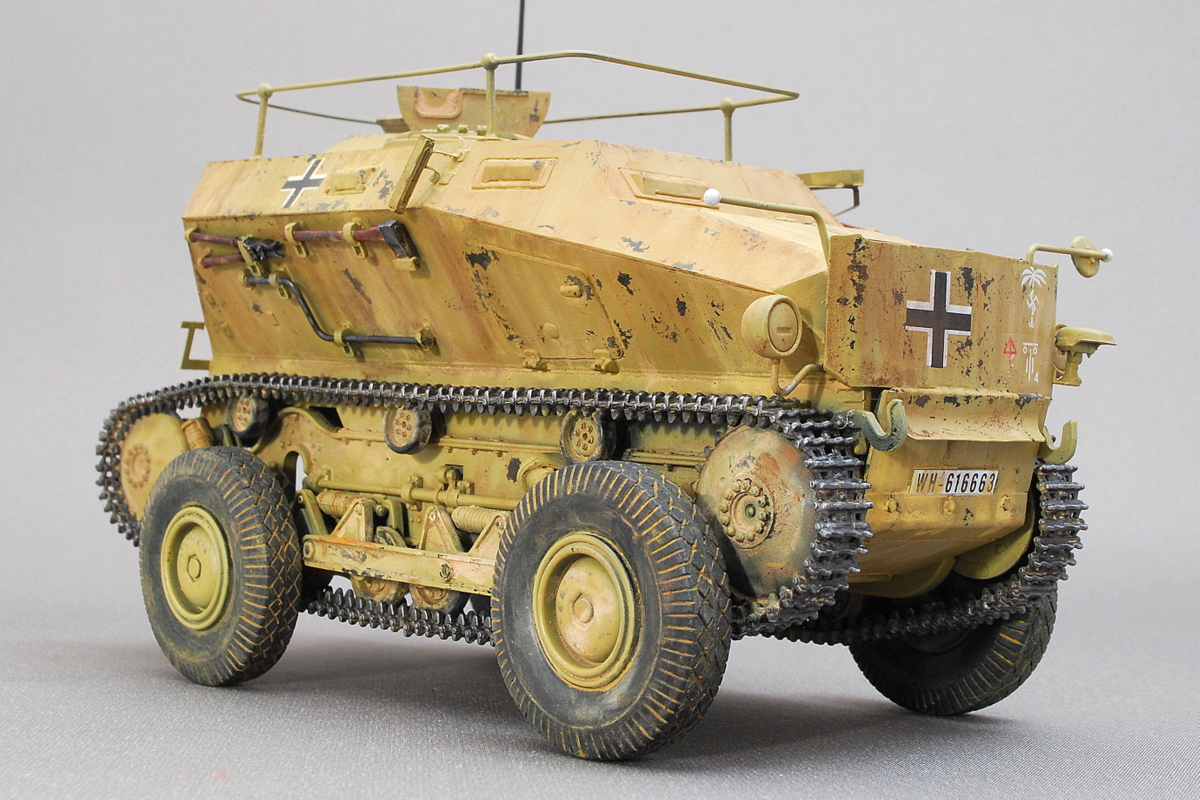 Because it is a rare structured vehicle, it was fun to build. The package’s German gray is also good, I think the car with the palm tree mark of the German Afrika Korps is very cool.
(21-April-2018)

It's a Bronco Sturmgeschütz III Ausf. E. The marking of this tank is German StuG. Abt 177 on the Eastern Front in 1941. The connected track is included in the kit, which is a point of a high evaluation. I love the overall angular form and the antenna case.

This time I built the Dragon King Tiger, the Henschel turret. It's a shame, but the molded ones are nicer than the epoxy putty coatings by myself. This item has a rough look without wearing a side skirt.

This is a Hobby Boss, Panzerkampfwagen I Ausf C. It is a very small vehicle body with few parts. I thought it would be easy to complete, but I struggled with the connecting caterpillar. I also made four German soldier figures in summer clothes.

Well, it's a required subject for German tank fans, King Tiger. The Dragon kit this time has a Zimmerit coating, so it didn't take much time. There are a lot of etched parts, and they are connected track, so there is nothing to say. This is a perfect kit.
スポンサーリンク
Wildcat Ghost Fighter FM-2 Sweet 1/144
British Infantry Somme Battle 1916 WWI Master Box 1/35