This time I’m going to build a destroyer after a long time. It is Ayanami of Yamashita Hobby. The parts are pretty detailed, but this manufacturer seems to have a good reputation. Actually, before this Ayanami, I wanted to make Hibiki 1941 using the same Yamashita Hobby, so I prepared etchED parts, but I bought Hibiki 1945 etched parts by mistake. When I checked the assembly manual, I thought something was wrong. I don’t really know what’s the difference… So, the etched parts that I bought by mistake seem to be suitable for Hibiki 1945 and Inazuma 1944, so I thought I should buy them separately, but Yamashita Hobby has released so many destroyers, many kits haven’t been sold for a while. I finally got the Inazuma 1944 the other day, I’ll make this another time. The name of the destroyer is complicated because it has many similar names such as “Inazuma” and “Ikazuchi.” The shapes of the Kanji characters are also similar. In addition, there are many female characters from Kantai Collection on the internet. 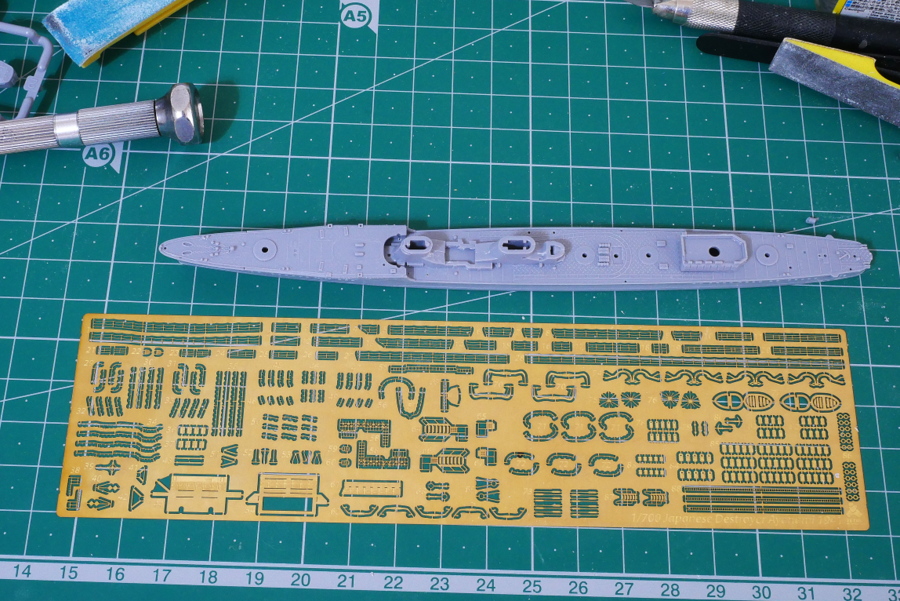 I’m going to use the etched parts from Tetra Model Works. The parts are quite small, so I wonder if I can use them all. I will try to use them if possible. 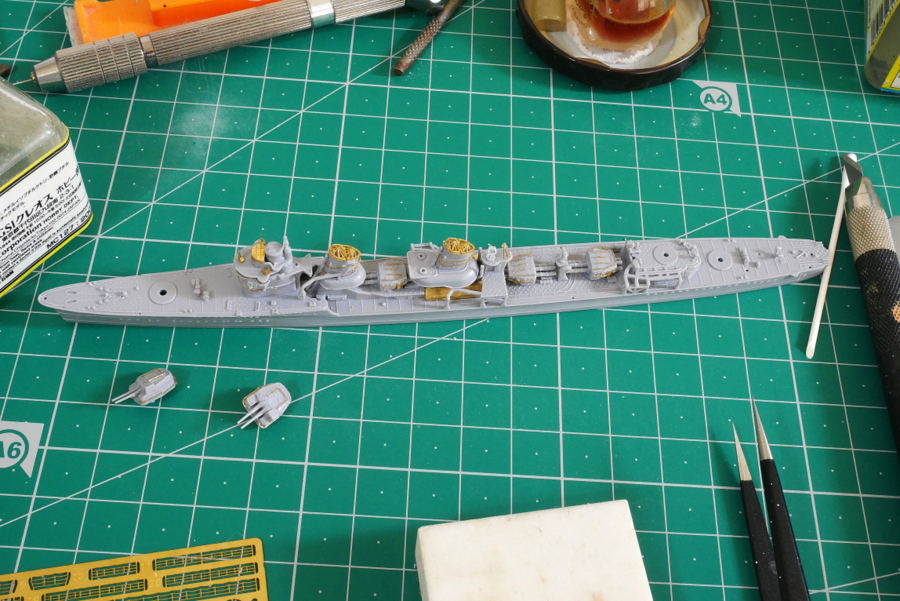 It’s been a long time since I made a battleship kit, but the parts are really small. However, brass etched parts are similar in color when they are dropped on the wooden floor, so it takes time to find them. When I crawled on the floor with a mag-light, dust was unexpectedly piled up. I have a cat, so I would appreciate it if my cat could find the parts, but eventually, the parts will get tangled around my cat’s legs and be carried to a place I can’t imagine at home.
(2021/10/03) 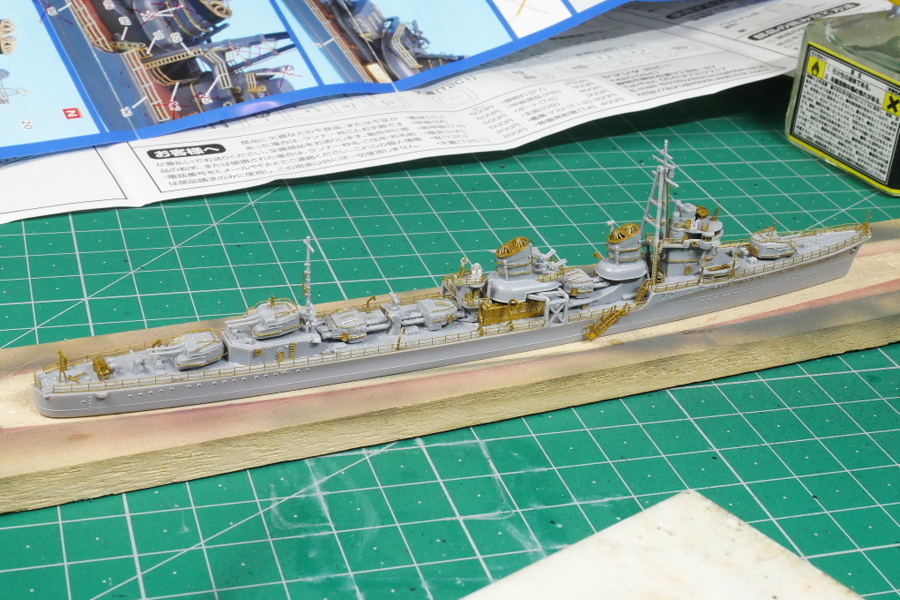 The parts are very detailed. Some parts are about 1/10 of a grain of rice. I thought Fujimi was too small, but the destroyer of Yamashita Hobby might be more than that. 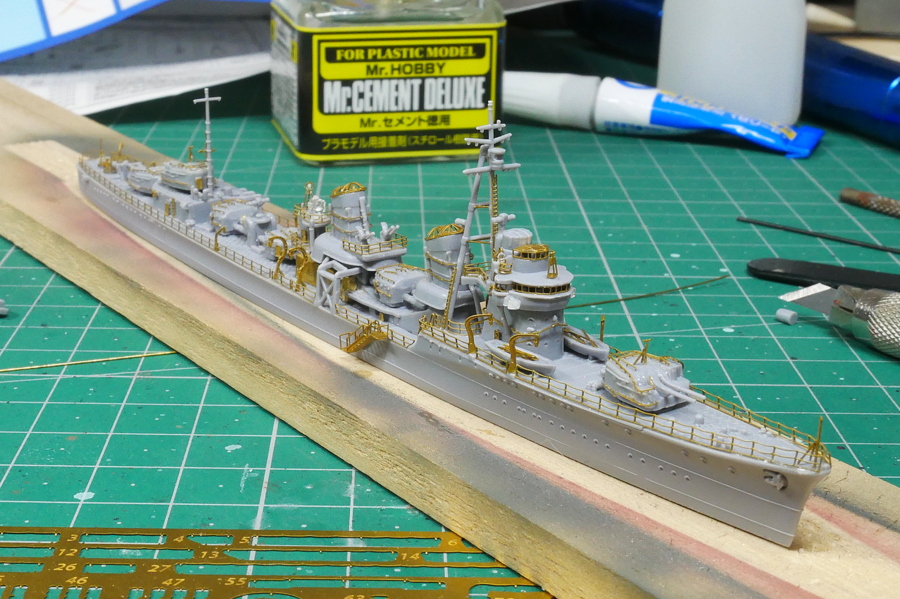 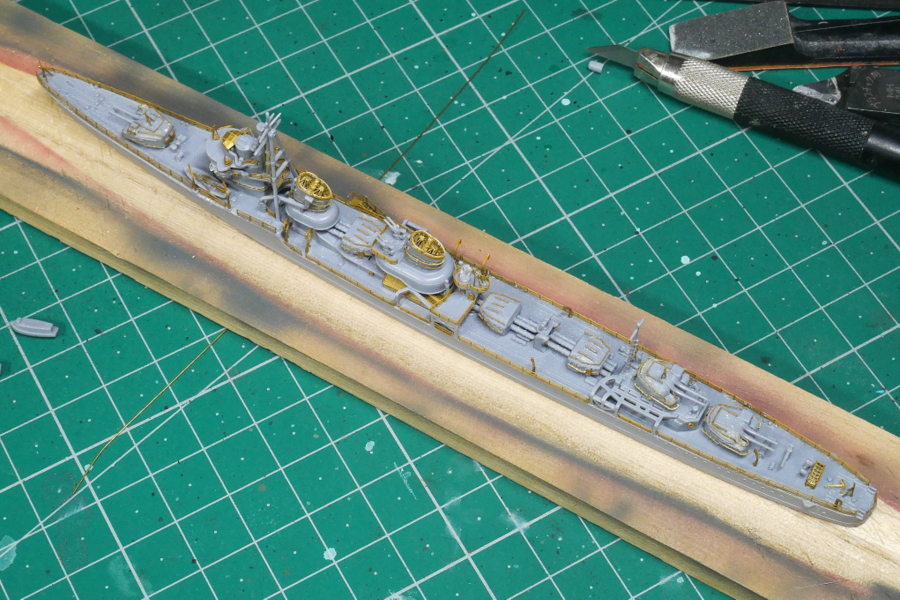 This time, all but 2 boats were glued together. A fine brush will do for the small parts. There are even wooden oars for boats included in the etched parts, wonderful. The hull is small, but there are a lot of etched parts, so it takes time if I use all of them. If the superglue is used too much, it becomes dirty, and if it is too little, it will not be strong and difficult. 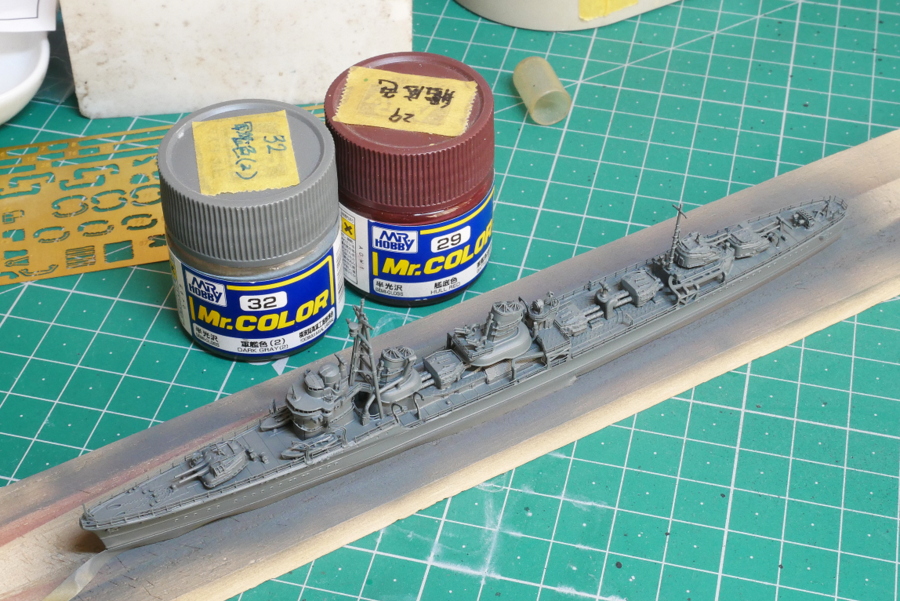 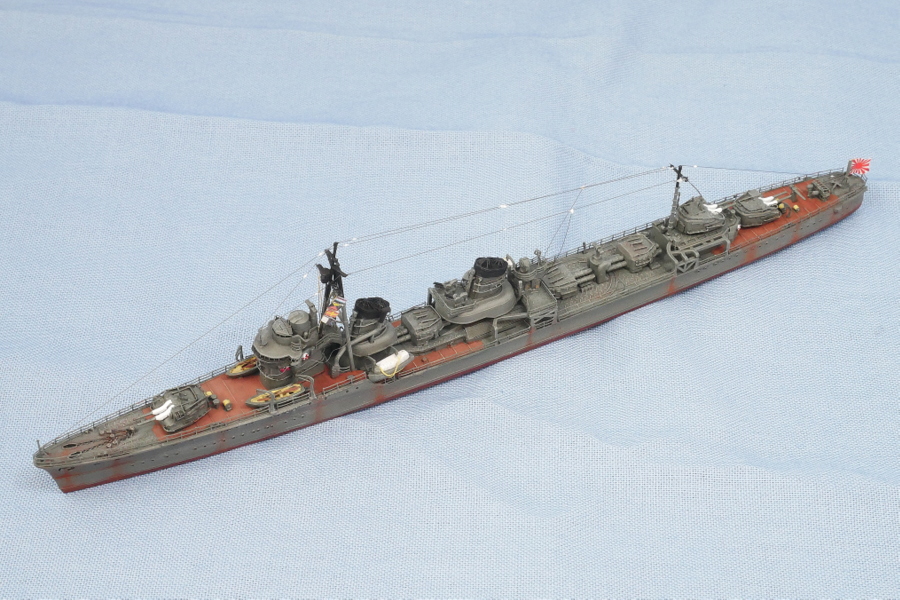 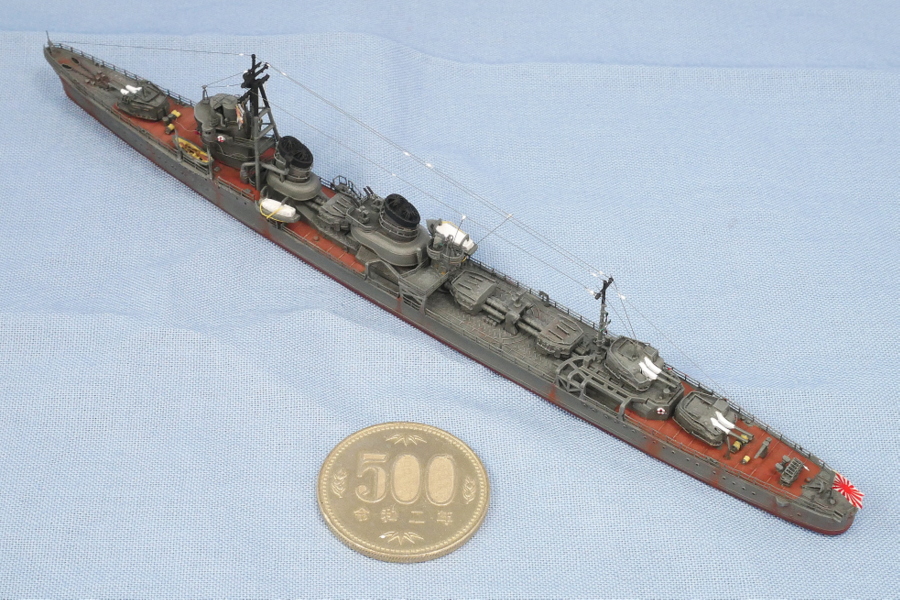 When this Ayanami kit was released, I didn’t notice it was revised because I bought it and piled it around 5-6 years ago. At present, it seems that a revised version of this Ayanami kit has been released, and the part composition of the bridge was changed based on the historical evidence that the shape of the front part of the Ayanami-shaped bridge part was a semicircular curve. It was explained that there was a time when the chimney parts were high from after the restoration performance improvement work to before the war, and it was a kit with additional parts so that the appearance of this time could be reproduced. I even used the etched parts, but I decided to do the details next time, so I made it anyway. 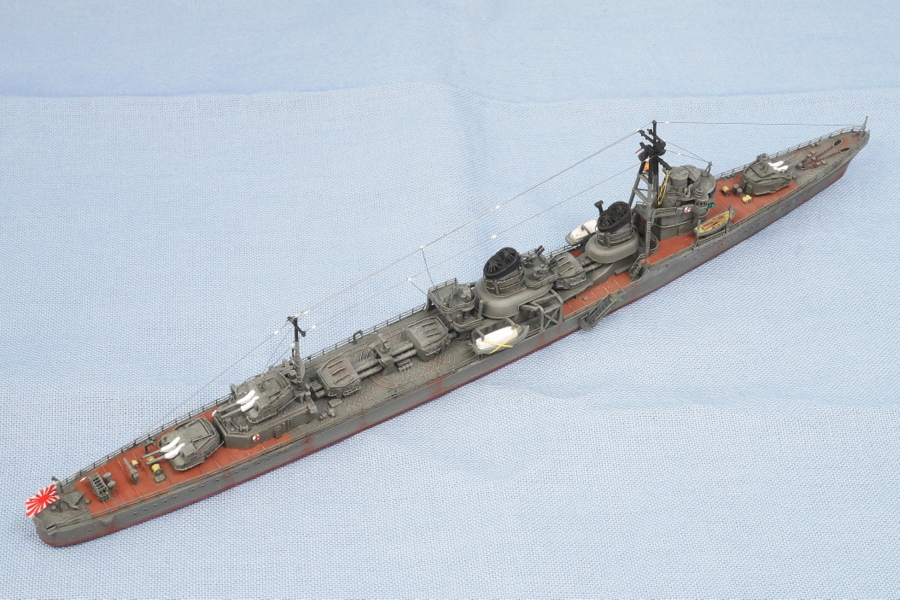 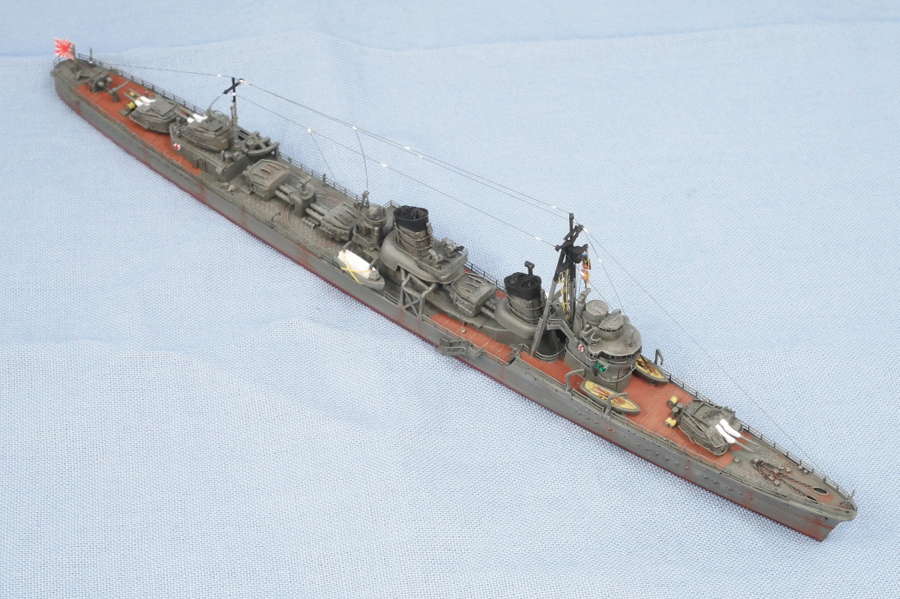 In the case of the kit I’m making now, the bridge has a round shape, but there is a part that is sharp, so I wonder if they changed it. Also, the Ayanami reforming kit surely has a little higher chimney. Anyway, this manufacturer’s kit is high quality. 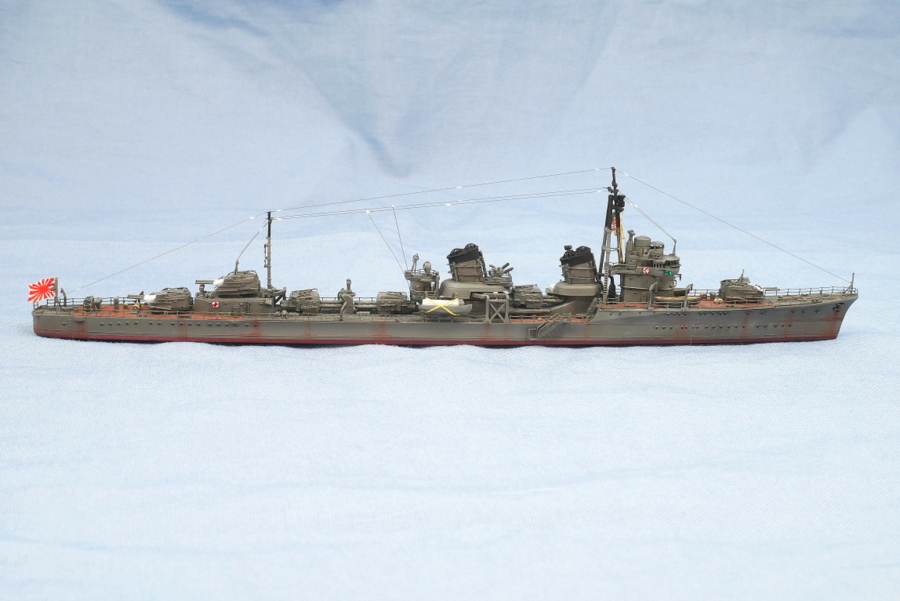 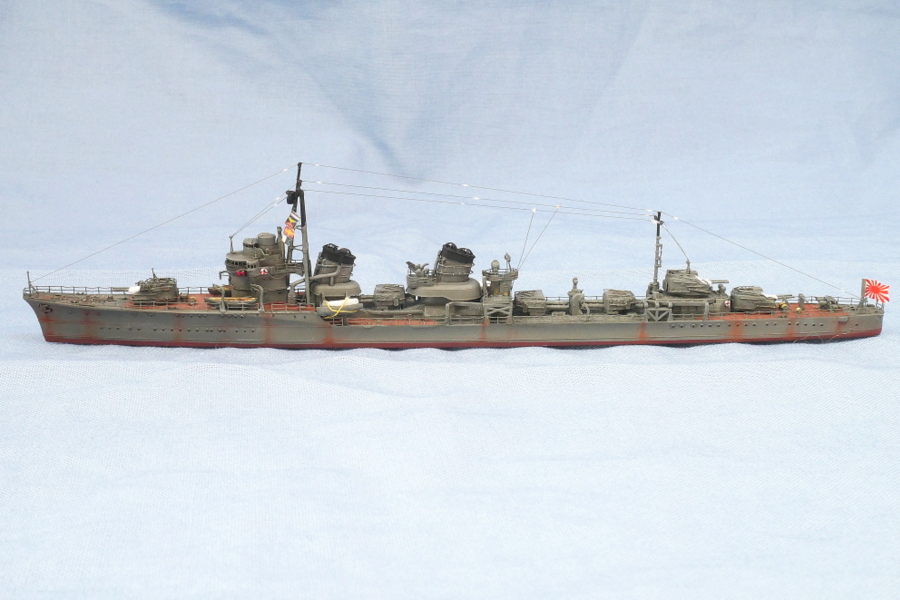 Destroyer Ayanami was a modern type of destroyer called Special Type Destroyer. It is positioned as the 11th ship of the special destroyer, but the design was improved on the way and the special type I is called the Fubuki type and the special type II is the first ship classified as the Ayanami type. The shape of the chimney, the shape of the ventilator, and the main gun will be different. The improved main gun can be tilted up to 75 degrees and can also be used as a high-angle gun. By the way, this Ayanami type was built on 10 ships and Ayanami was the No. 1 ship. 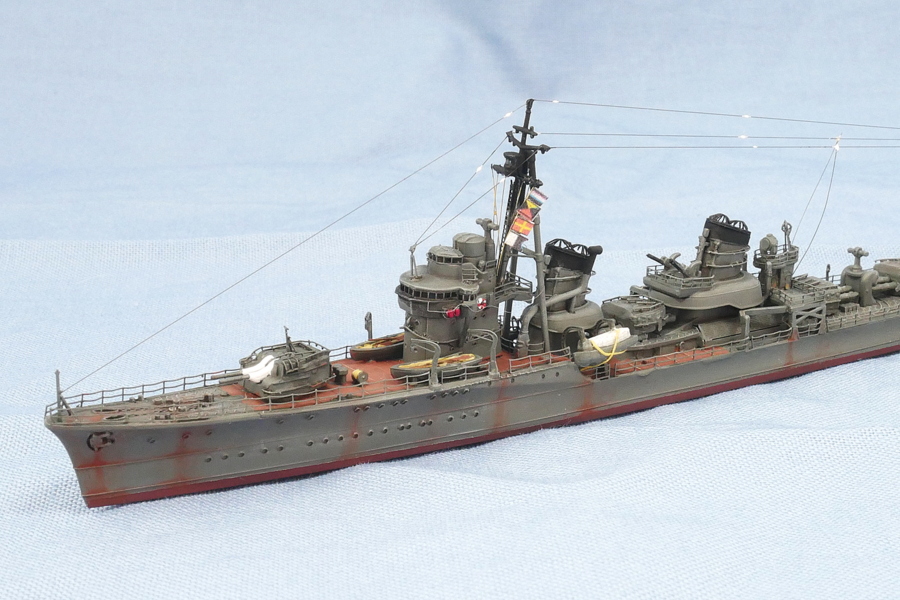 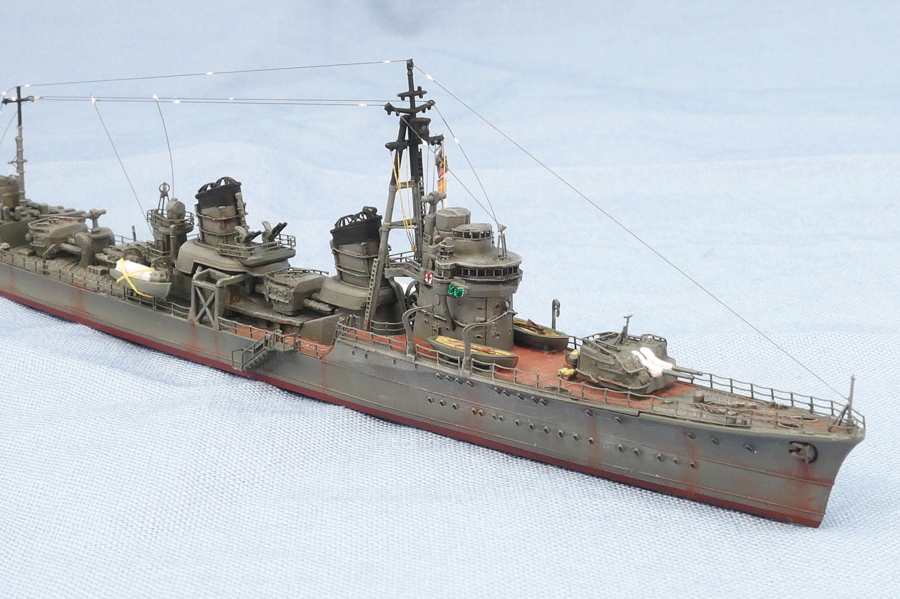 Ayanami is active in various operations such as the Sino-Japanese War and the Malay Peninsula landing operation right after the start of the Pacific War. Ayanami sank in the Third Battle of the Solomon Sea on November 14 15, 1942, but achieved tremendous results, sinking two enemy destroyers, wrecking one, and wrecking one battleship. According to the explanation in Yamashita Hobby’s assembly manual, 172 out of 219 crew members were rescued at the time of the sinking, which shows the commanding ability of the captain. 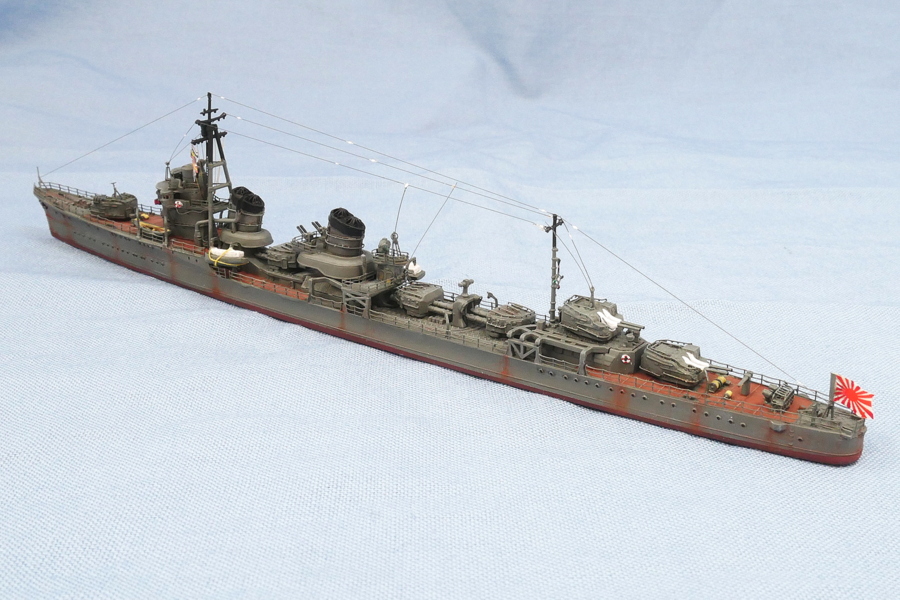 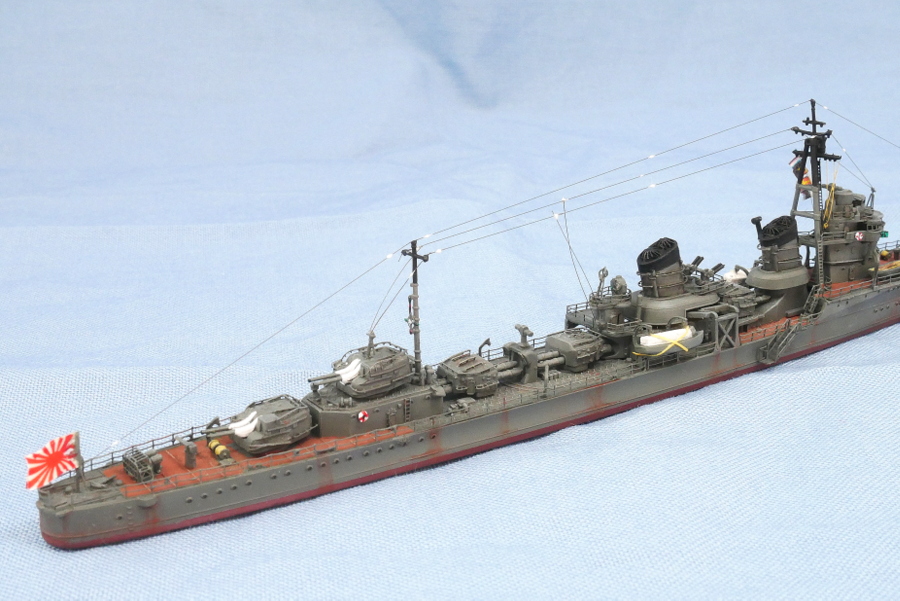 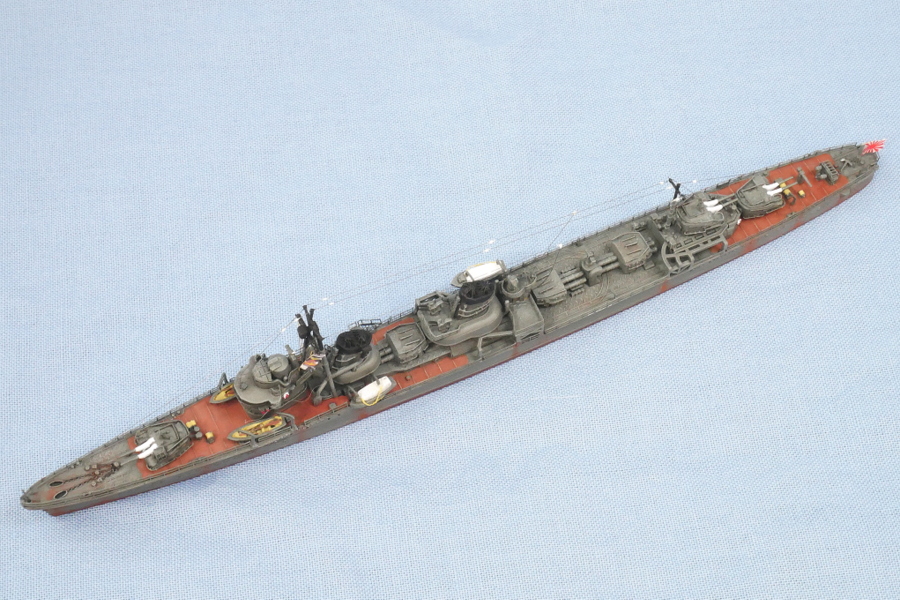 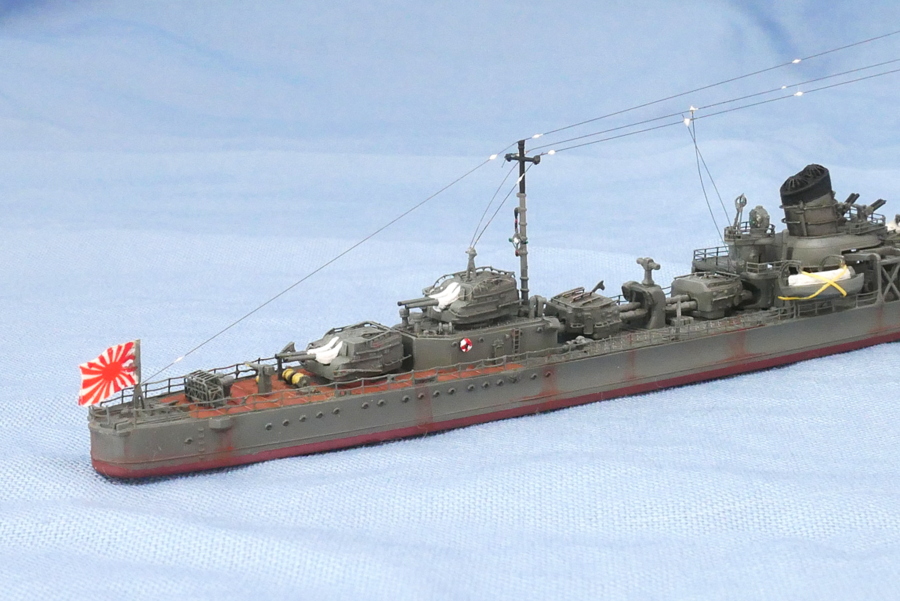 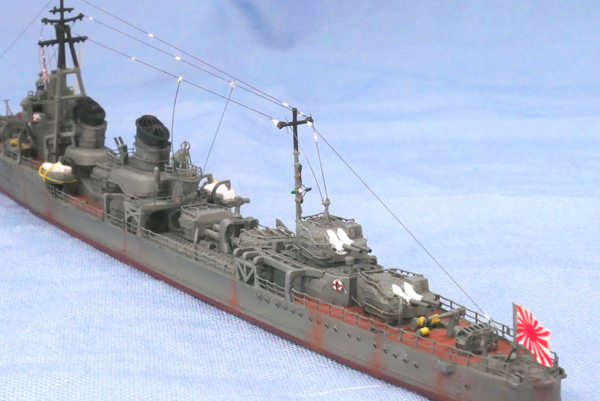 This time, I painted the stern signal light in red and green. It’s too fine to paint. 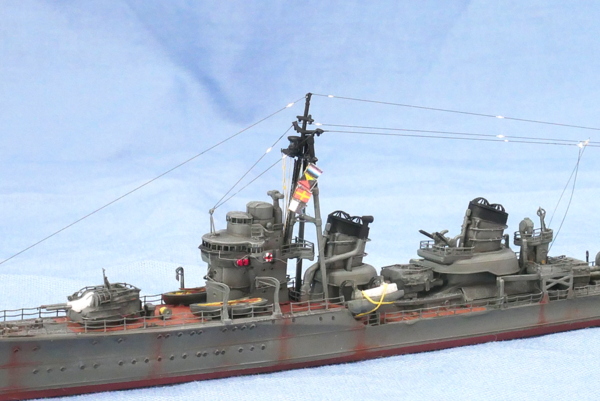 The former Japanese Navy warship code of the destroyer Ayanami is JZRA, so I attached it to the mast a little. 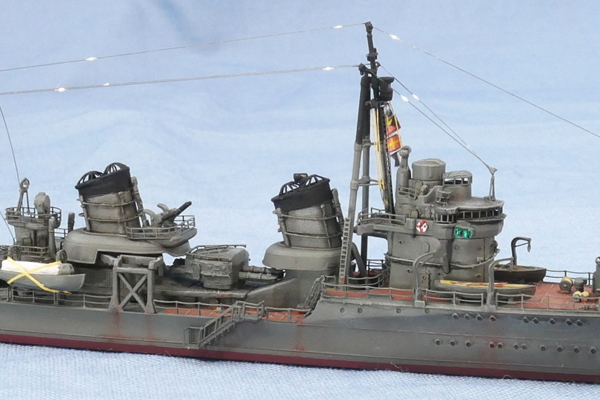 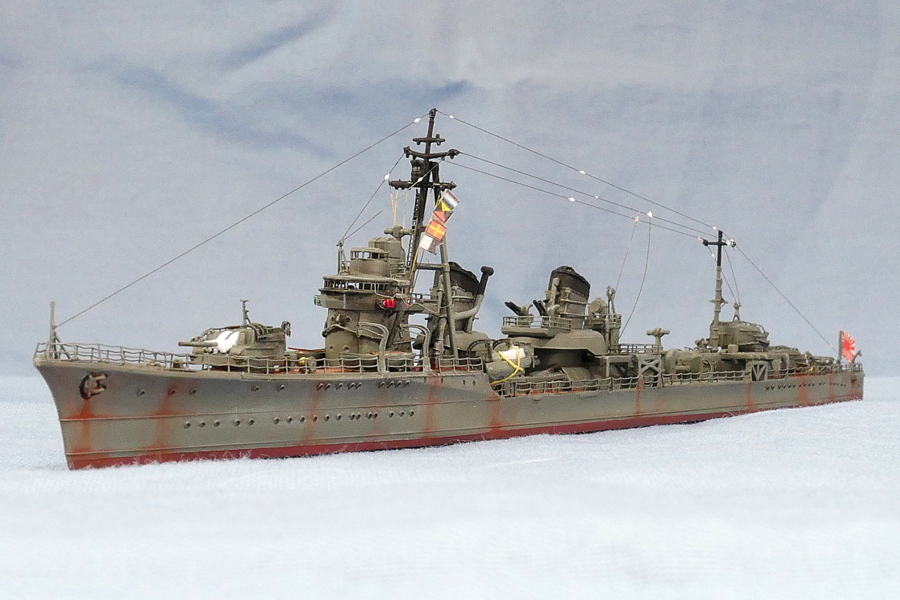 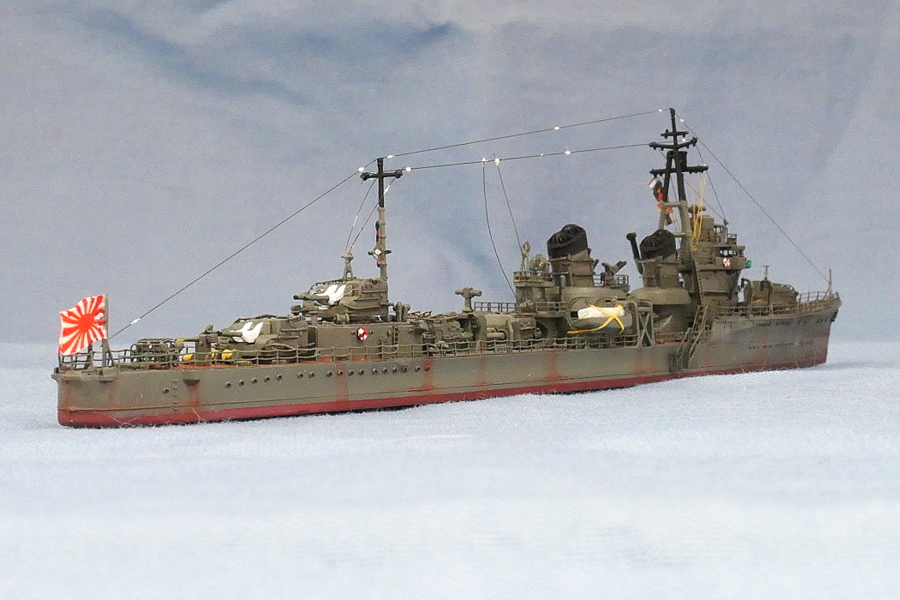 The shape of this destroyer is beautiful. The destroyer had no Chrysanthemum emblem on it, but I think its work is nothing but fighting spirit. I pray for the souls of the fallen heroes who were defending Japan.
(2021/10/08)

The heavy cruiser Chokai has been completed. Chokai is the 4th of Takao-class heavy cruiser. The ship's name comes from Mount Chokai on the border of Akita and Yamagata prefectures in northern Japan. This Fujimi Chokai kit, including its etched parts, I had a hard struggle. When I finish it, It has a sense of precision and looks cool.

I would like to have a kit of Fujimi's destroyer Yukikaze and exclusive detail-up parts to finish as precisely as possible. Some parts were bent, but the assembly was completed somehow. Etched parts were mostly used.

Hasegawa Tenryu has a reputation for being easy to assemble. I added a handrail for the etched part and I tried to make an antenna. The area of the linoleum deck is quite large. It is a light cruiser that is good at night battle equipped with many torpedo tubes.

It is Tamiya's light cruiser Abukuma. This kit has a favorable review that it is easy to assemble even for beginners. I used a handrail with etched parts sold separately. I tried to set up an antenna, but it is quite difficult to work.

Fujimi's aircraft carrier Hosho was built. That said, a few years ago I completed the Hosho parts, which was included in the kit for outfitting the Yamato, a disappointing 1/700 lucky bag. I used a special etched part. I can't believe that the etched parts of Fujimi's ship model are so scarce. It's OK if third parties provide us with more and better products.
スポンサーリンク
Su-30MK Flanker Academy 1/48
North American RAF Mustang III Tamiya 1/48