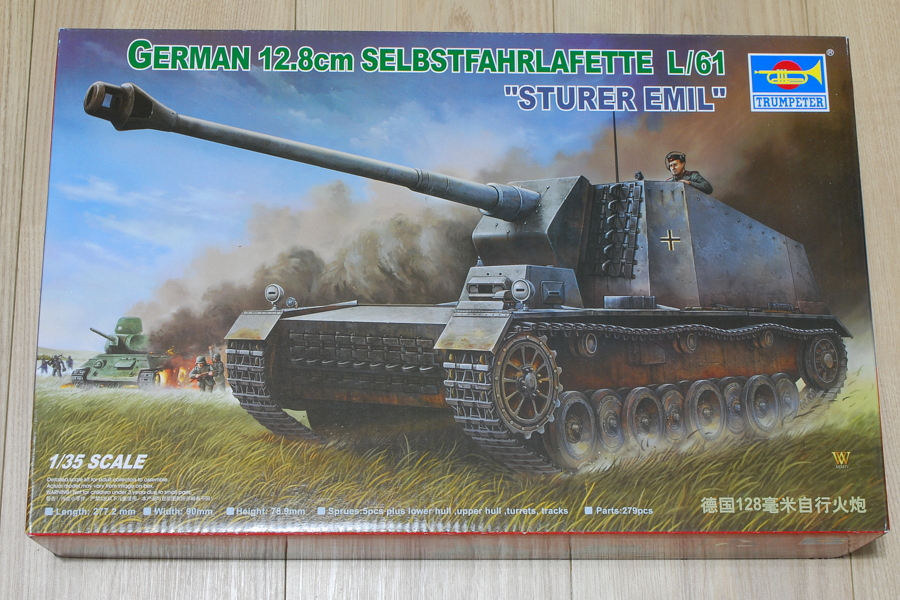 This is the Trumpeter kit, Sturer Emil. It was a kit released over 10 years ago. At that time it was sold at a reasonable price. And at that time I bought it and stocked it all the time. In those days I did not expect that the tank plastic model price will rise. 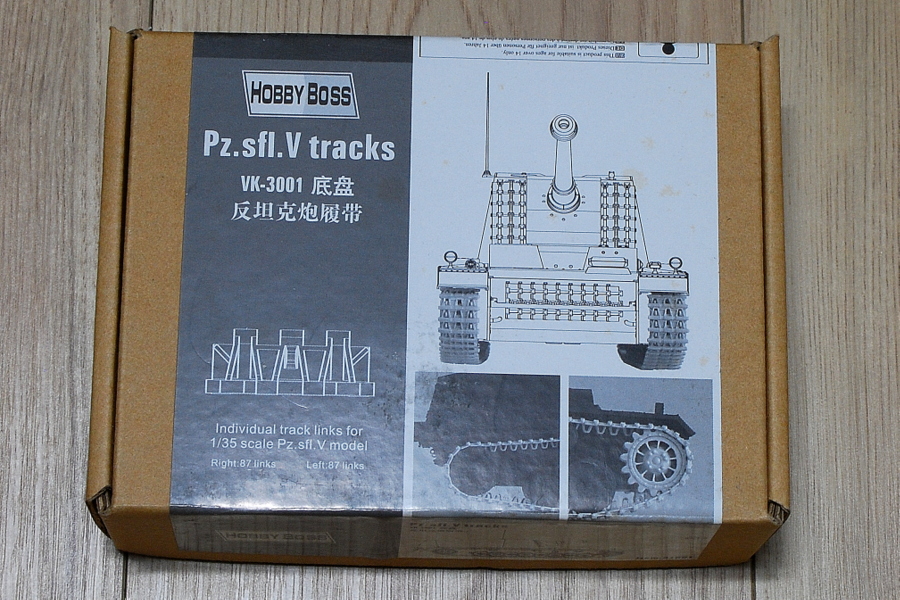 I try to use the joint tracks for Sturer Emil released by Hobby Boss. 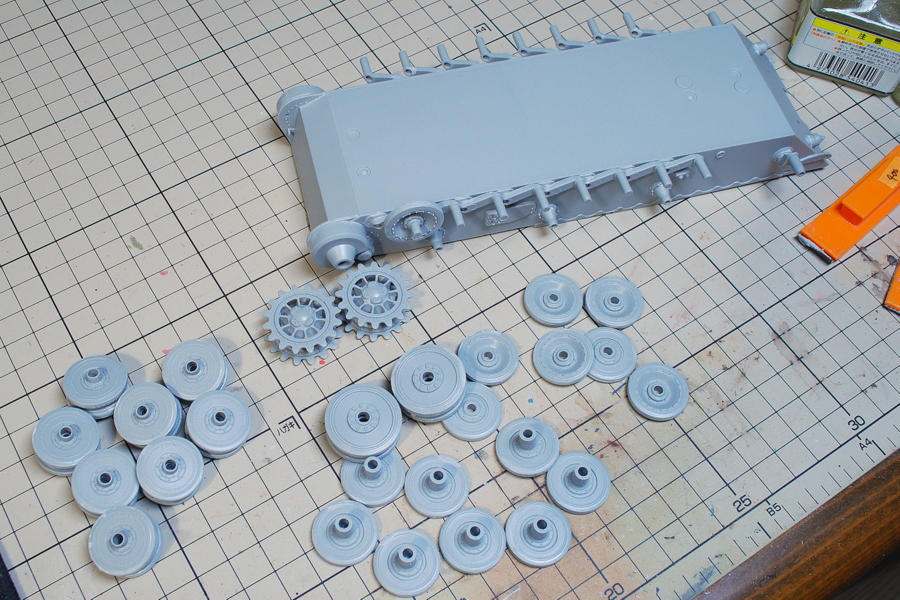 Sturer Emil has a road wheel arrangement of reticular patterns like a Tiger and Panter. 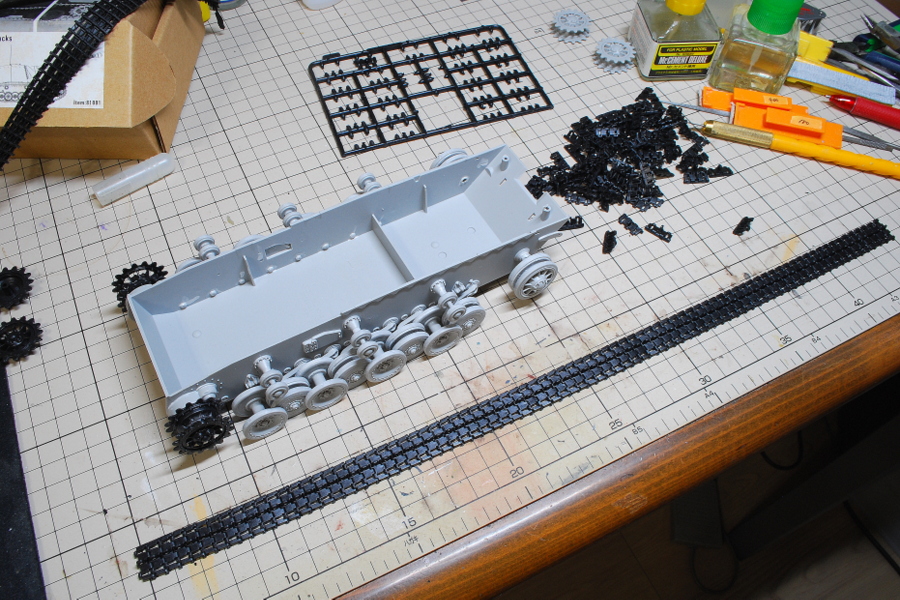 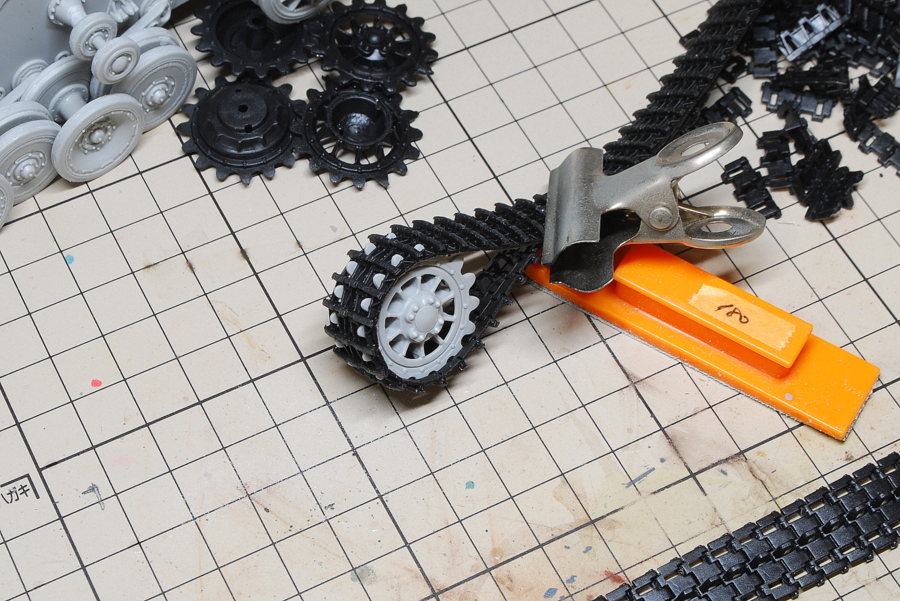 It’s not so bad when I rolled a belt type. Since this tank has a longer overall length and it is better to slack the caterpillar to look cool, the connected caterpillar seems easier to adjust the position. 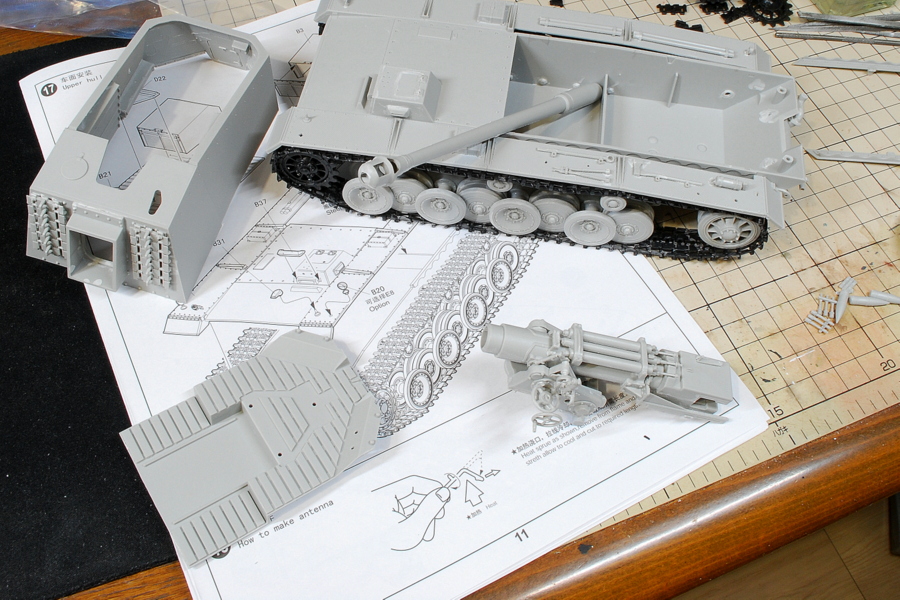 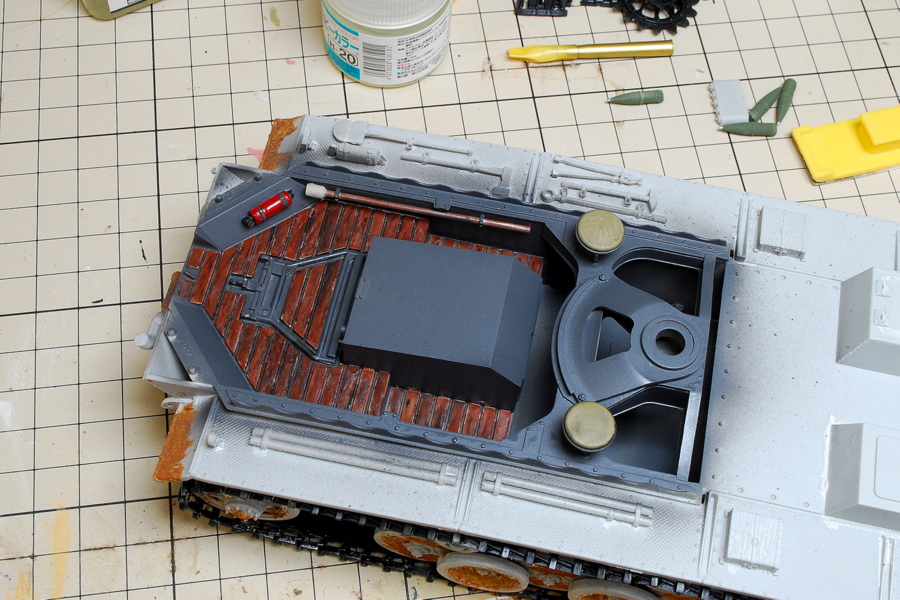 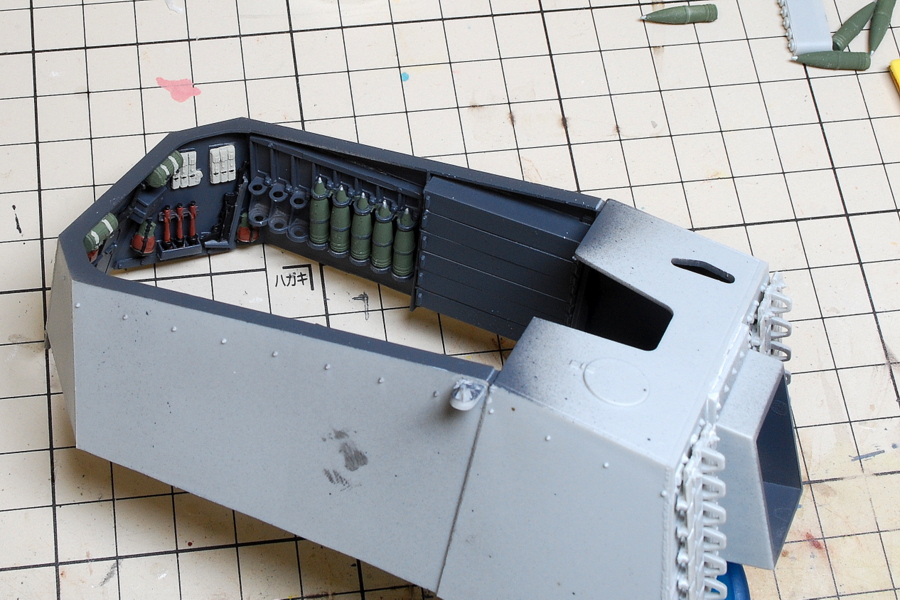 Open top antitank self-propelled gun, painting various things in the turret. The items are the same as ordinarily equipped with infantry, placed in the reach of their hands. 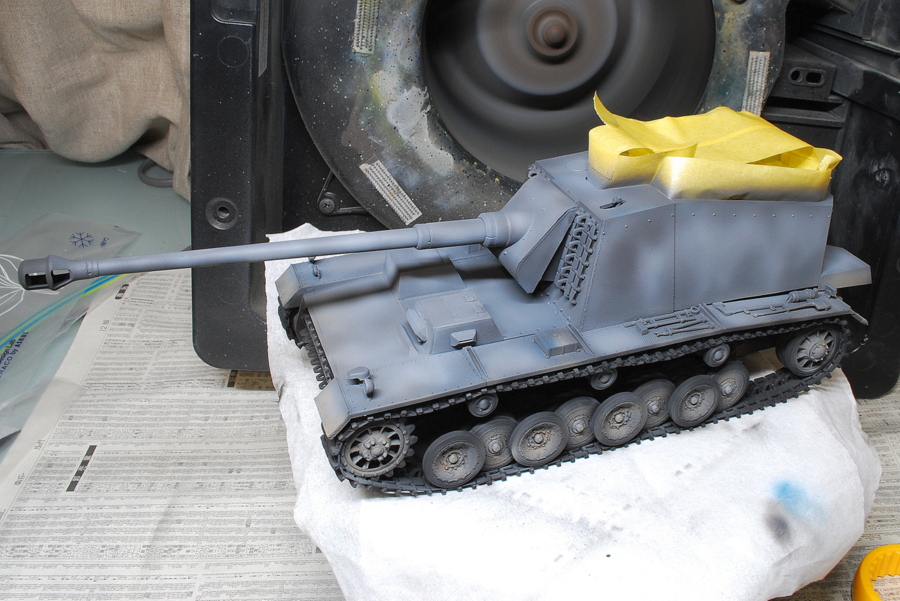 Painting of German gray and mud. Mud is only three-dimensional, color is decided later.
(21-September-2017) 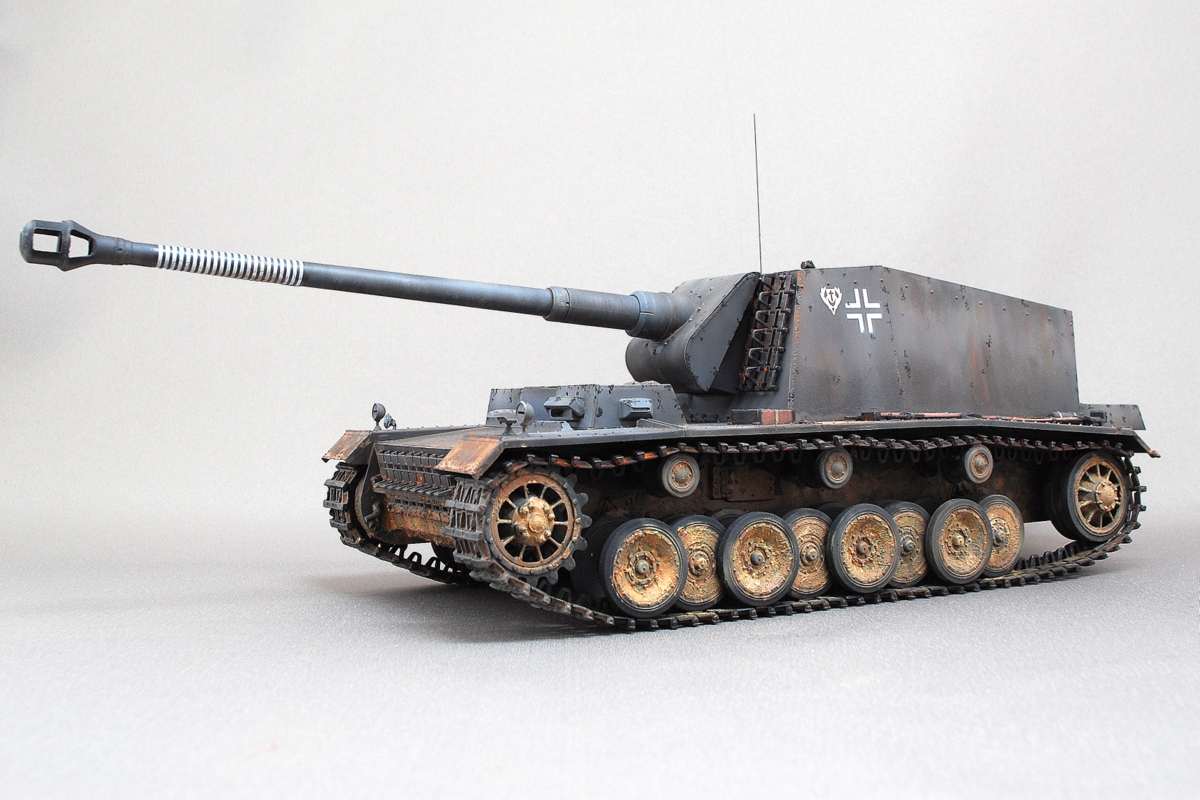 The main weapon is equipped with a 61 caliber 12.8 cm antitank gun, which is the most characteristic of this vehicle. From the character of the picture book, it was the nickname of Max and Moritzin. Only two tanks were deployed. However, it was a vehicle that became the basis of the Tiger heavy tank. The final assembly was done at the Rheinmetall AG in Düsseldorf, and two vehicles were completed in August 1941. 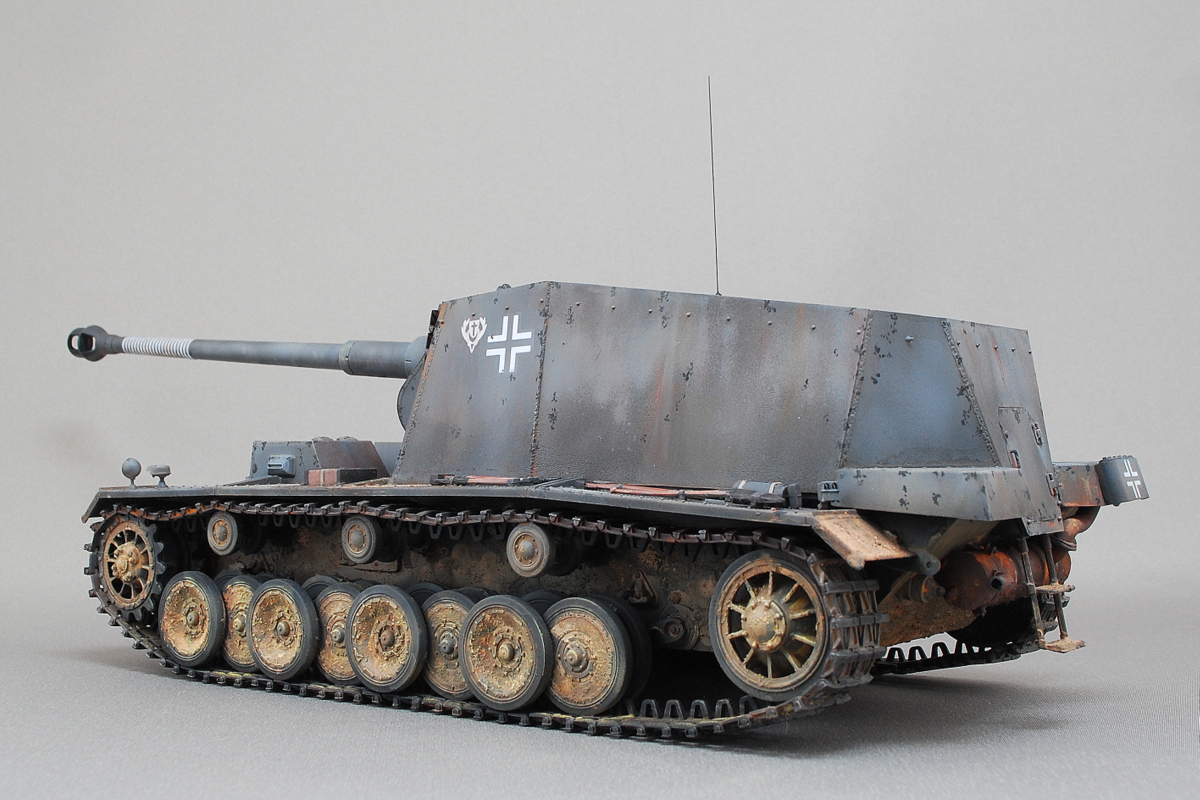 The marking is the 3rd Armored Division’s Independent 521 Tank Destroyer Battalion 3rd Squadron. It is cool as it stands out that simple white marking on the German gray. Afterward, the 521 tank destroyer battalion was annihilated in Stalingrad at the beginning of 1943. One of the two was captured by the Soviet Army. 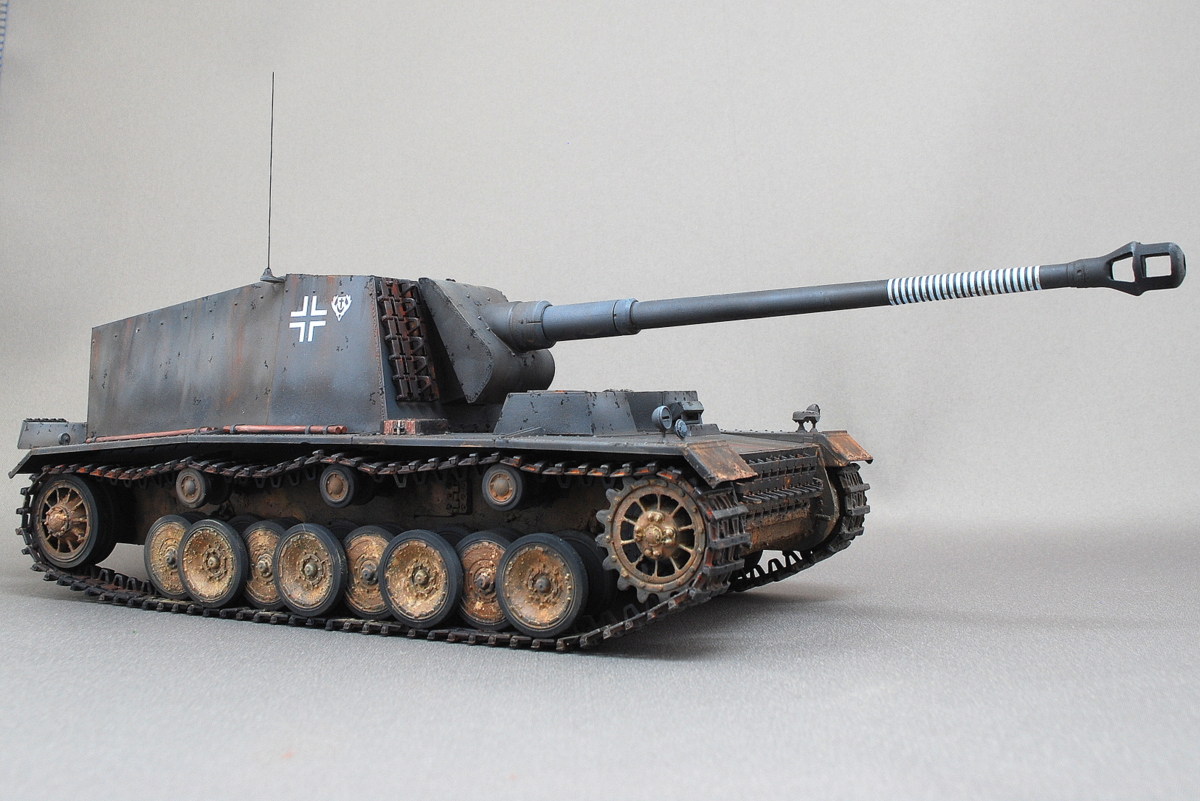 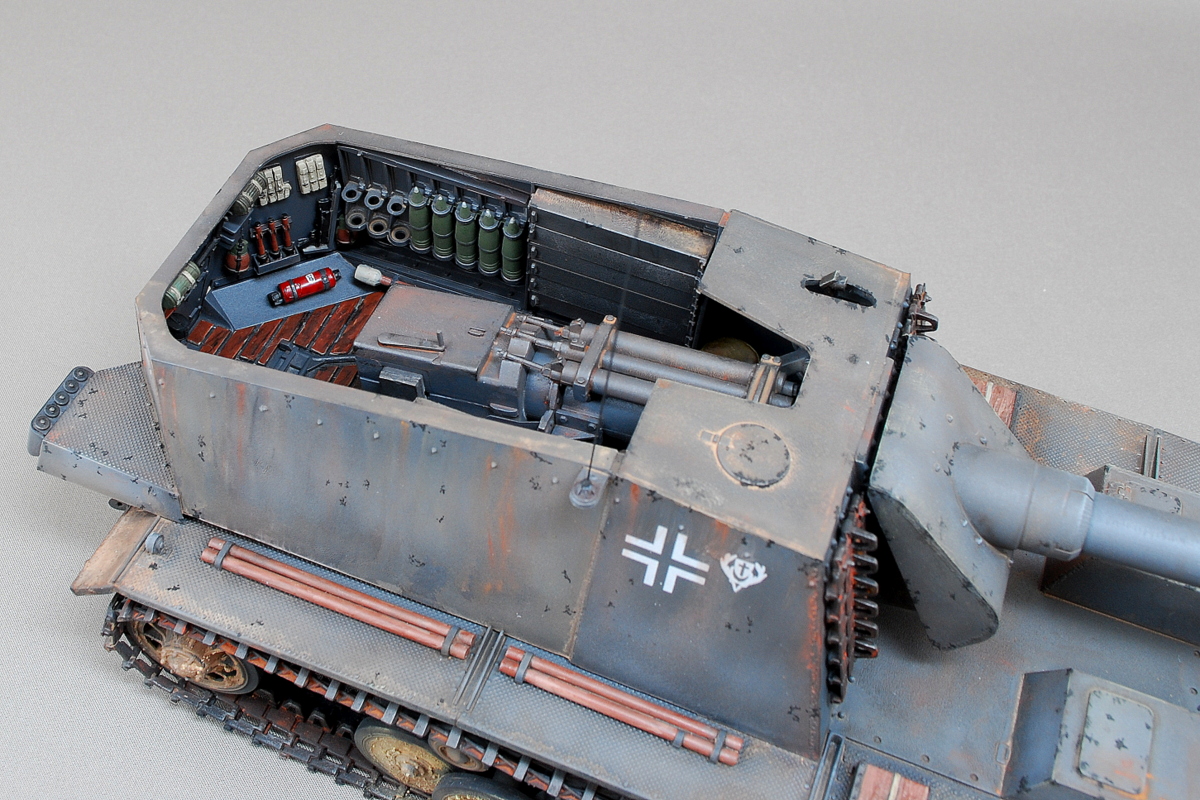 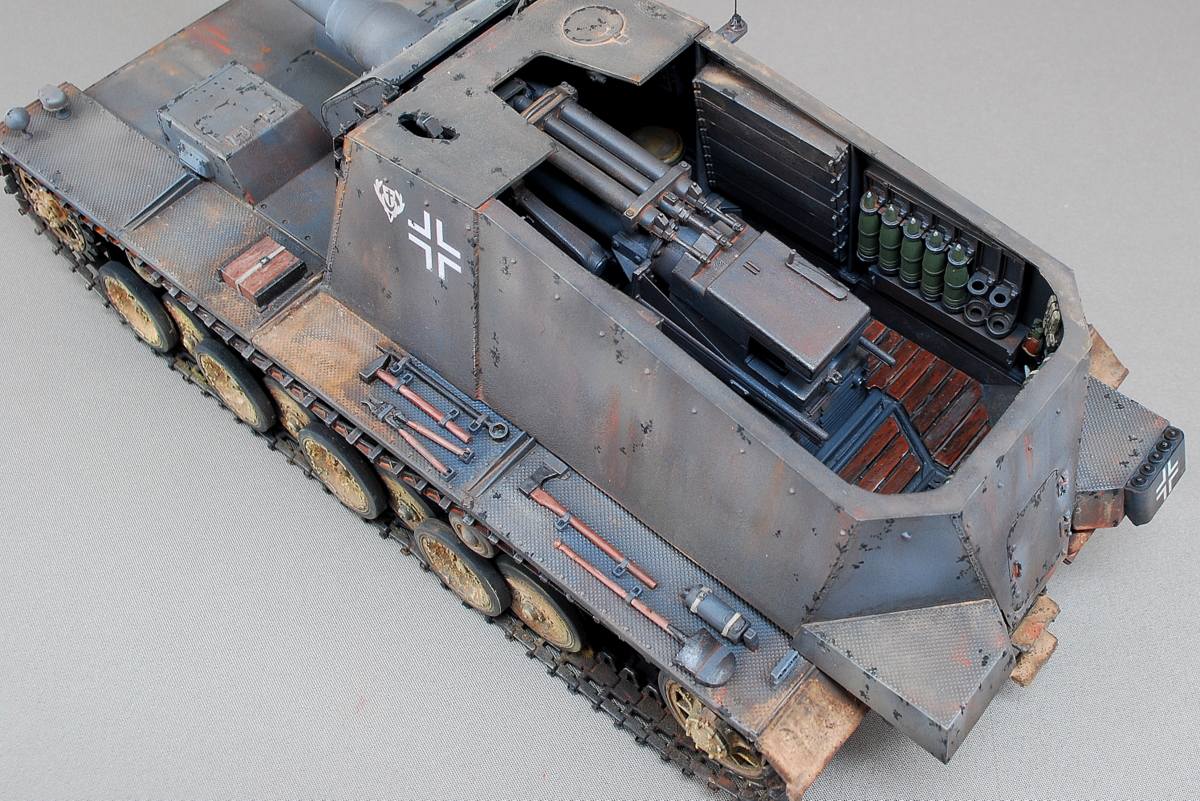 The battle room looks bigger when you glance from outside, the truth is too narrow to move. 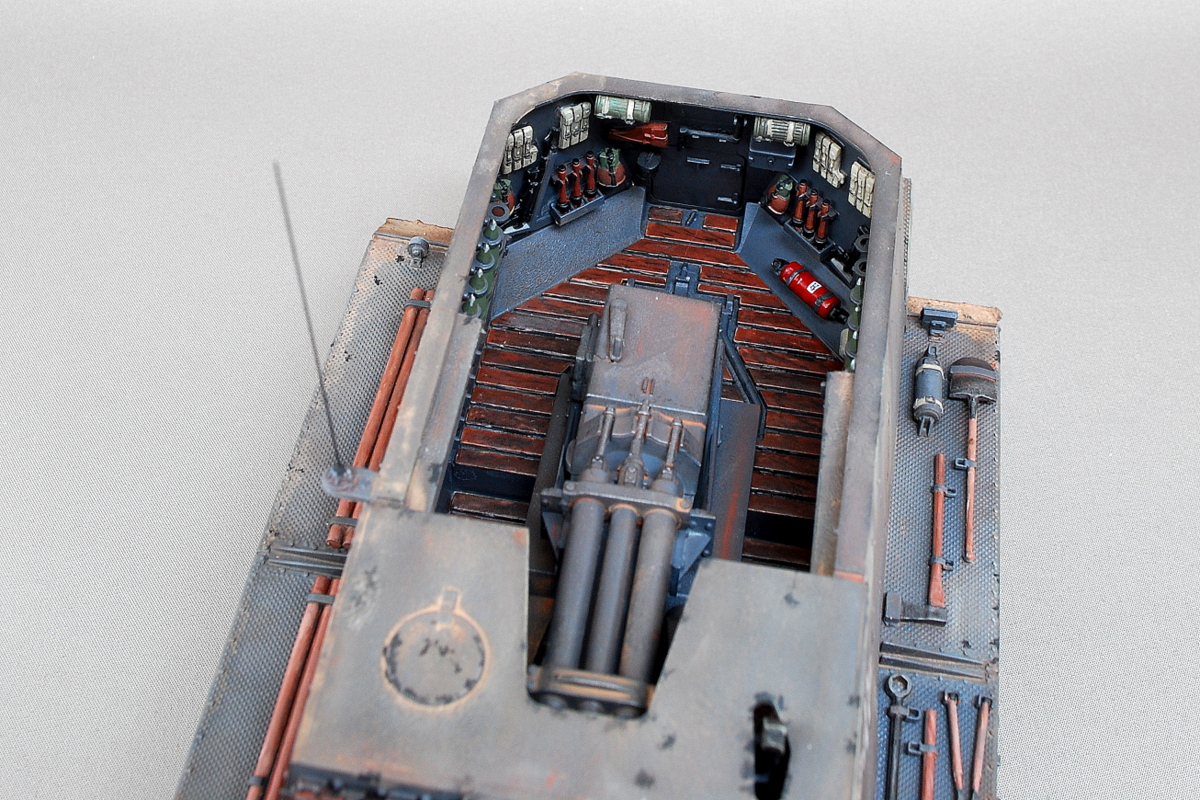 I judged that the floor in the car was partly wooden and tried to paint it to the wood grain finish. I think whether it becomes a considerably good accent in the model when looking from the top. 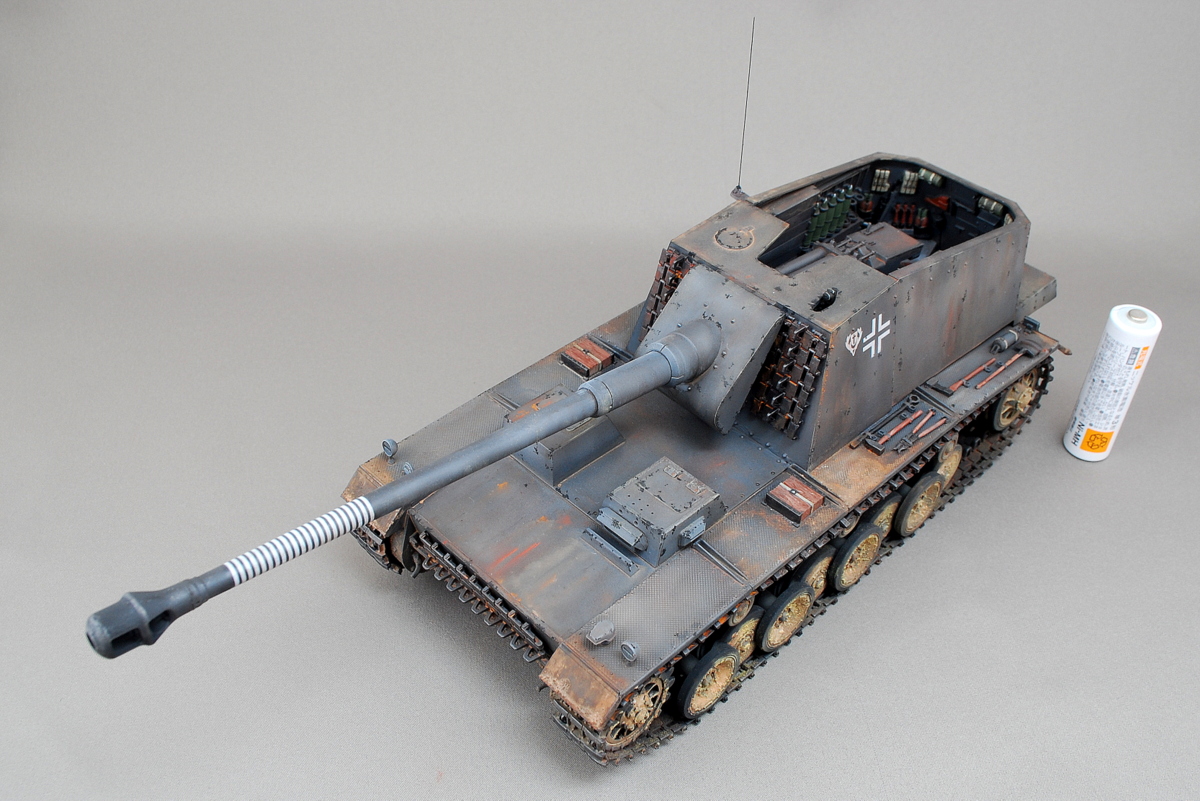 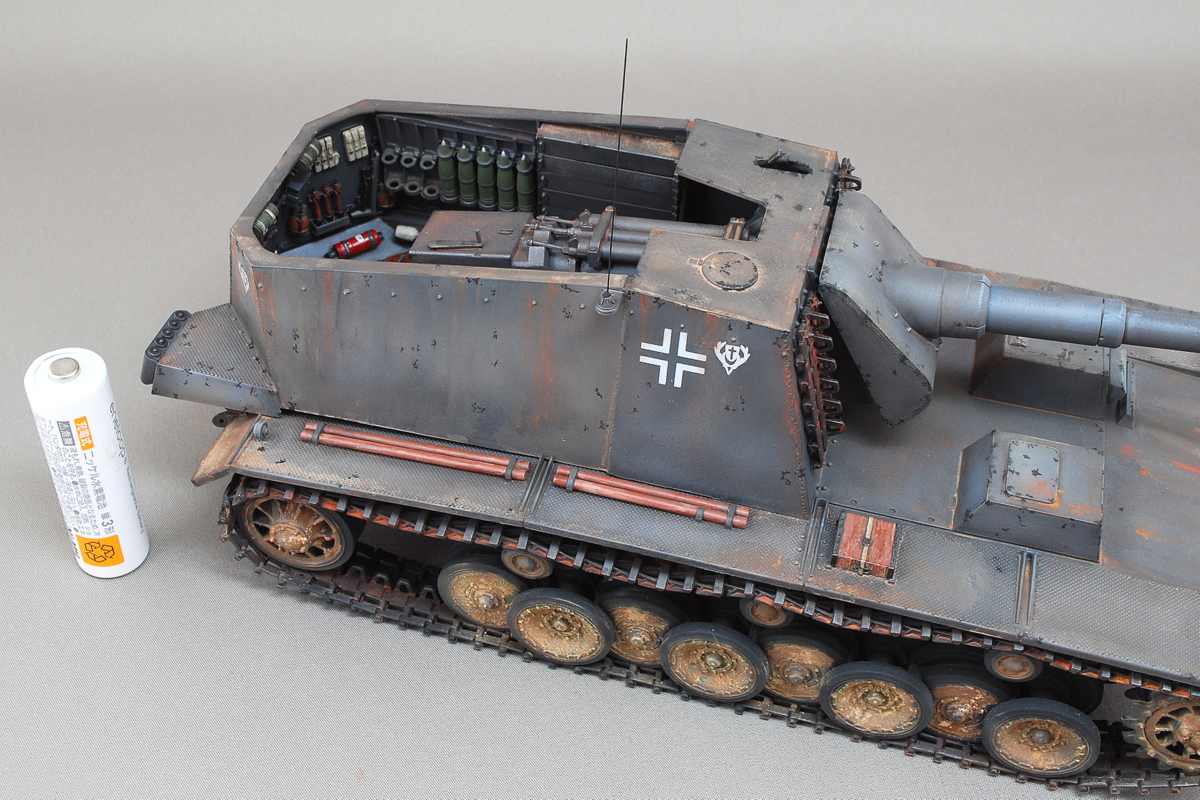 After a long time, I did the chipping and it became monotonous. 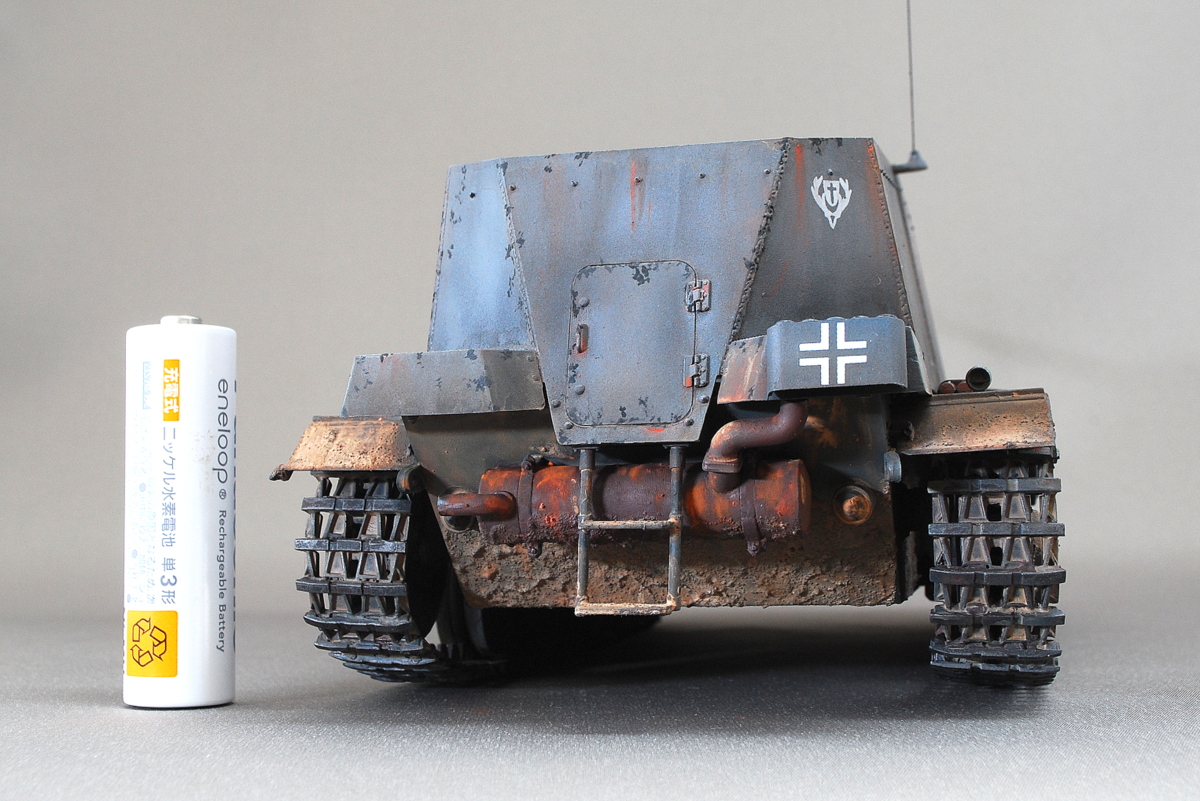 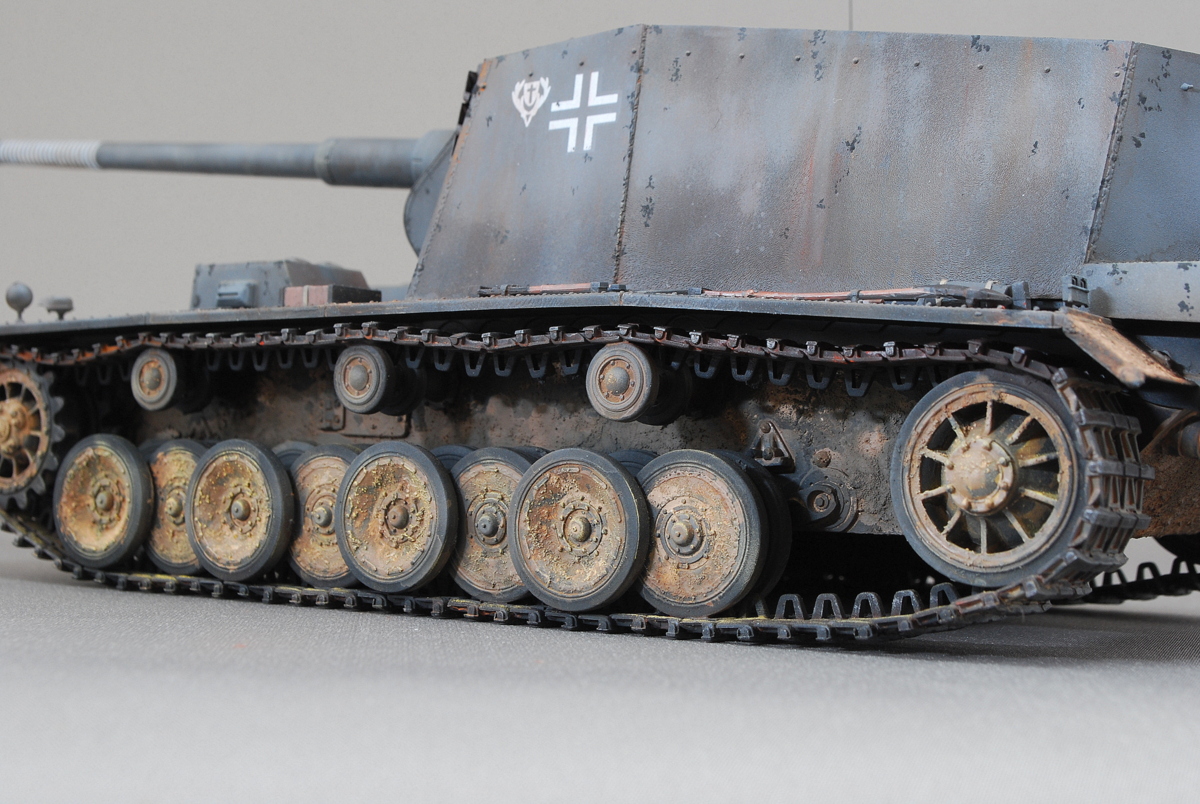 The joint tracks of Hobby Boss’s Sturler Emil are like cheap plastic material, and difficult to build a bit. But there are a couple of more difficult things, I could assemble this anyway. It does not matter if you put a high liquidity glue all together, leave it for a while, and wind it all at once. It seemed better to fit the parts to use the cutter than the nipper side cutter. 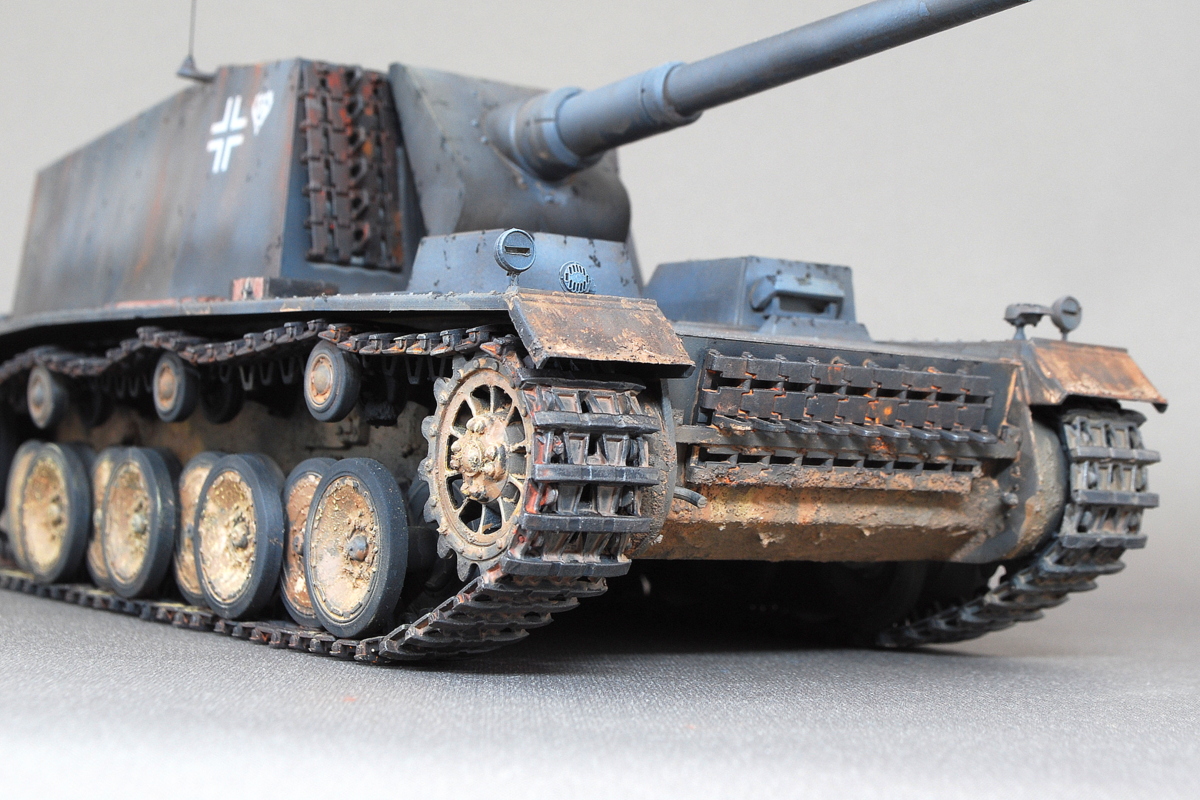 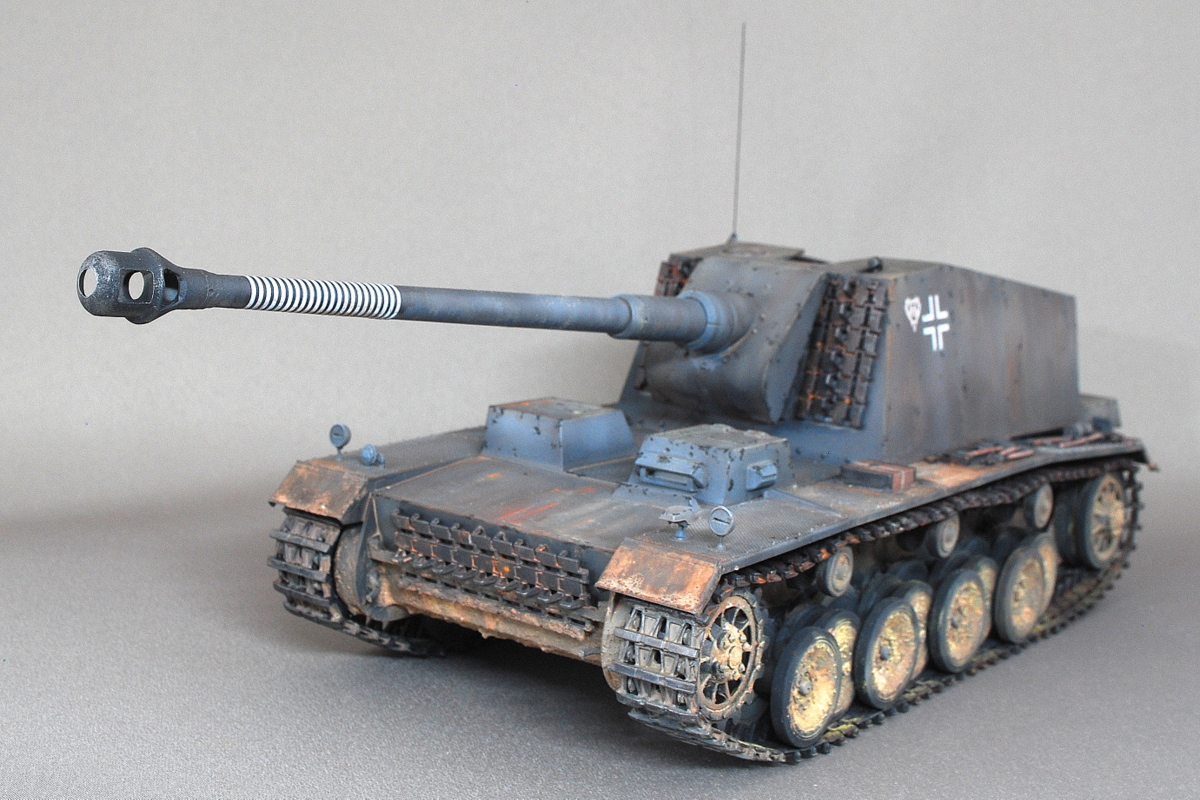 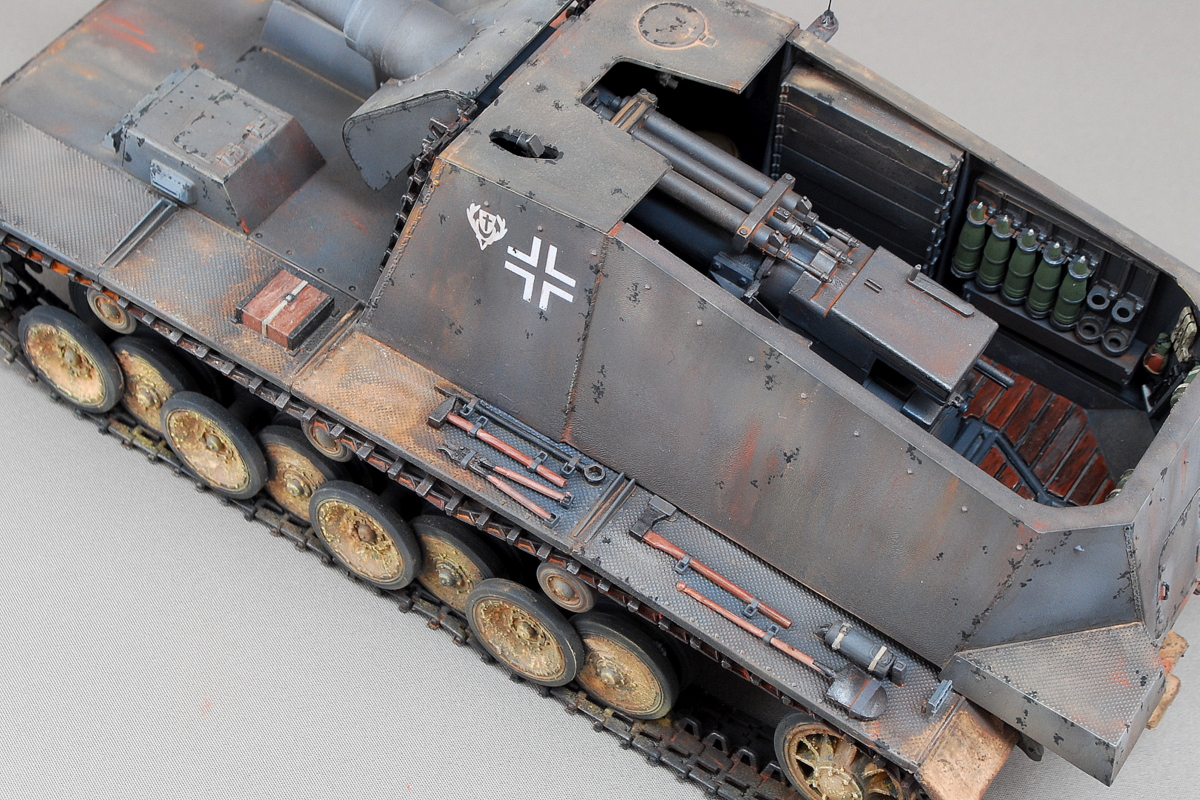 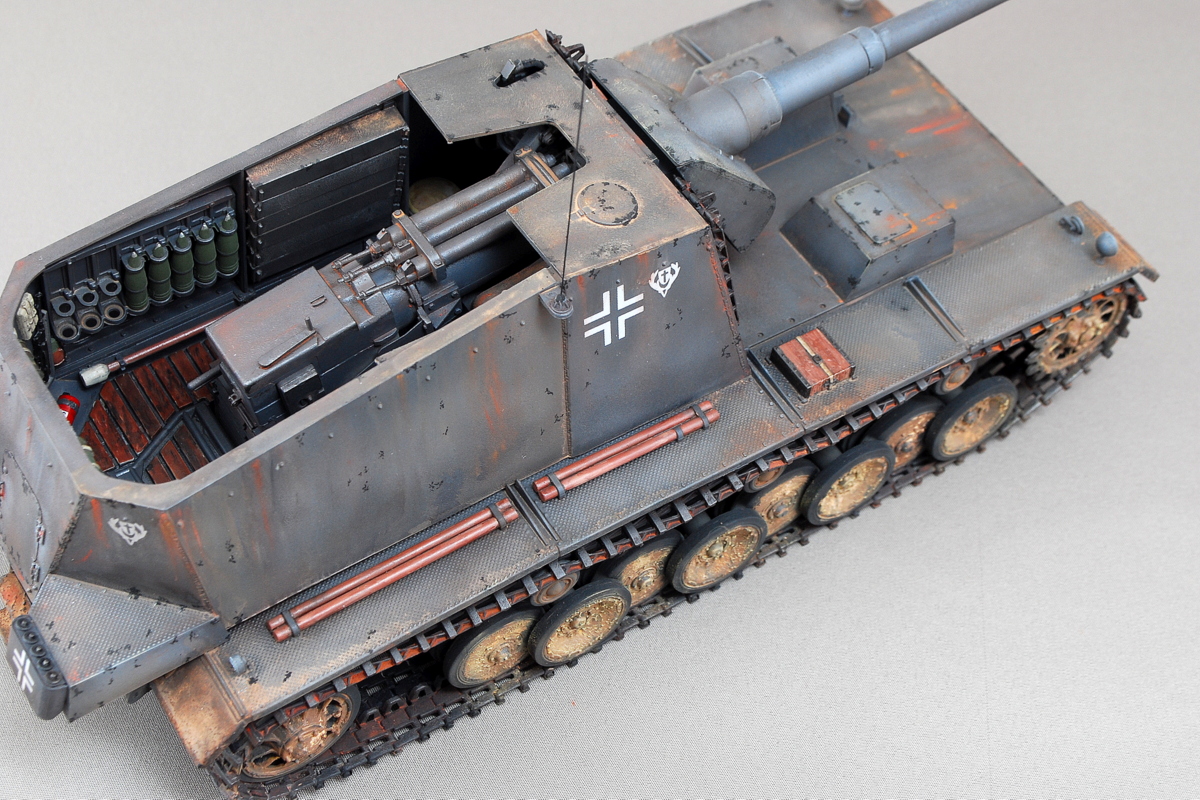 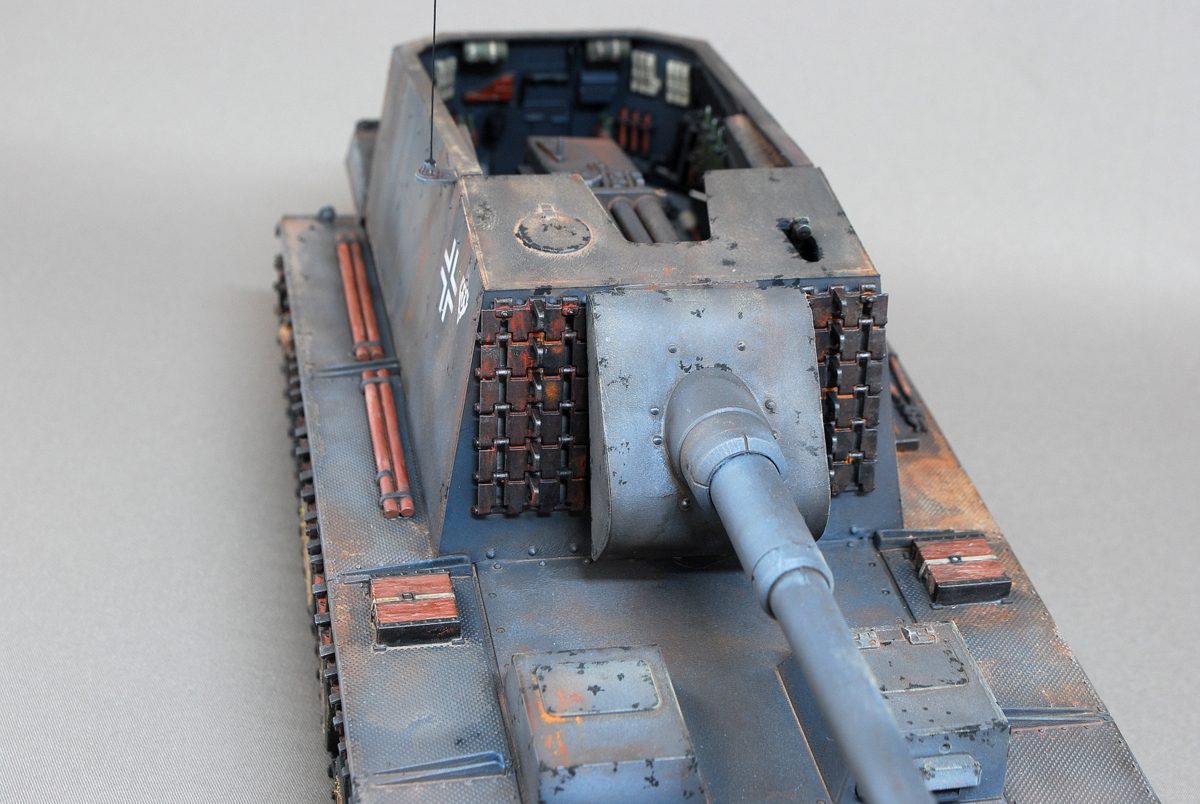 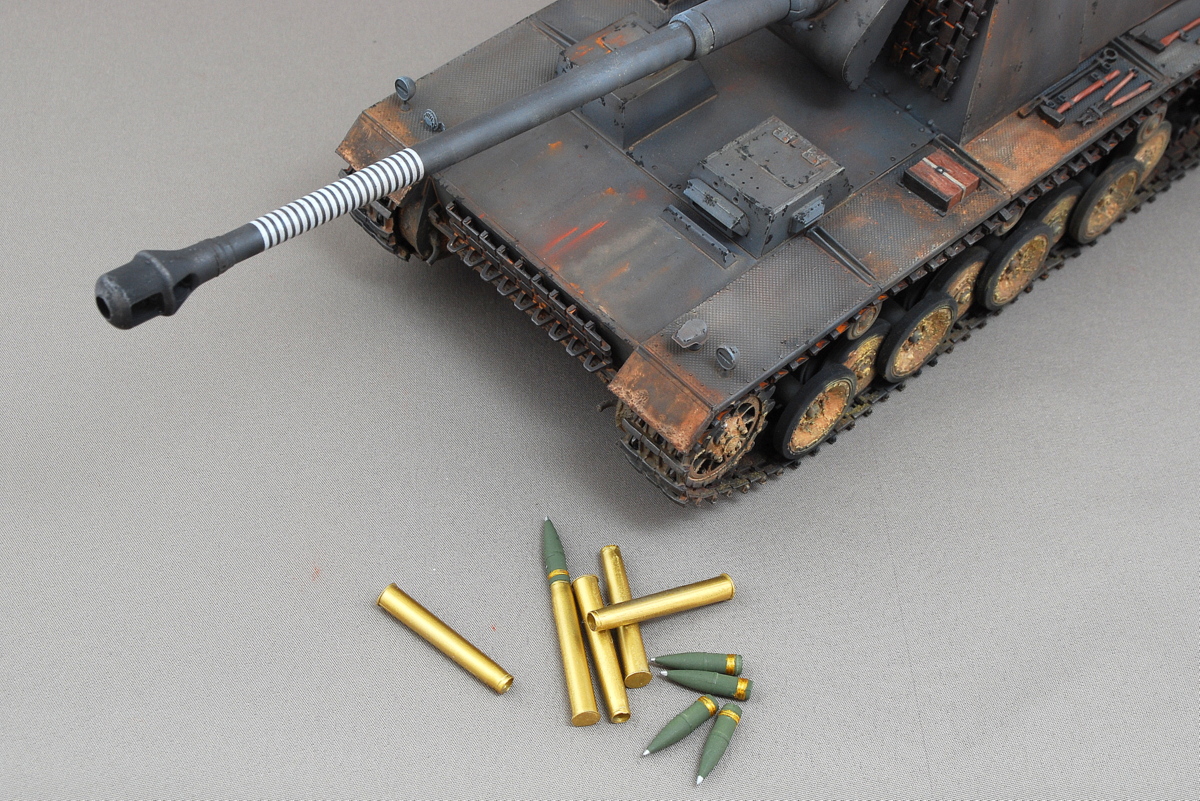 Parts of the shell were attached and painted and arranged. It is real if I roll them in the turret. 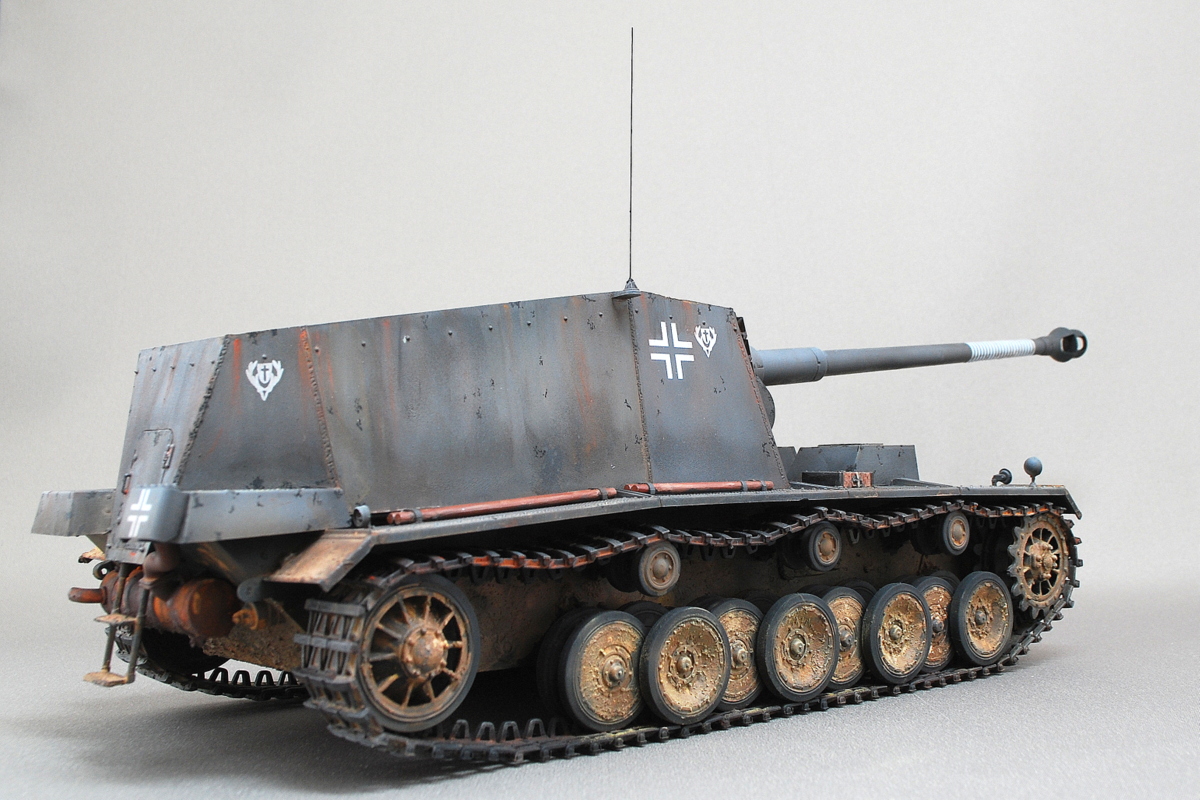 Once completed, it is a long barrel and the size of the vehicle body is quite large, it’s quite a powerful impression. The open-top vehicles are a bit cumbersome to make compared to ordinary tanks, but it’s interesting to see the inside.

It is nothing to do with the model, but I completed 100% an adventure game, Steins: Gate, The theme is time travel. I have been playing it since June. It was a very good game as reputed. I was thinking that I would end at the only Suzuha Ending, I strongly recommend that you should play until the True Ending. Is it too much praise that I can revive the impression simply by listening to the theme song? I want to play again from the beginning by erasing my memory if I could. It was a good way to see the true ending at the end. I was not interested in Moe culture and Tsundere at all, but It was surprisingly satisfying with a masterpiece.
(22-September-2017)

It's Zündapp K800 from Vulkan Scale Models. There was also a motorcycle soldier. The spokes on the wheel of the etched part are realistic. It is difficult to match the figure and the motorcycle.

Tamiya's Tiger I tank is an early type deployed in North Africa. I used a few etched parts of the Passion Models and using the AFV Club connection track. The markings are No. 501 Heavy Tank Battalion 1st Company No. 131, tank in Tunisia in 1942.

It is the Dragon Smart Kit, the Panzerkampfwagen III of the DAK. The marking is the 15th armor division, which had severe battle experience with the 21st armor division under the control of General Rommel in North Africa. Palm tree marking is a nice taste.

Tamiya's Steyr German military vehicle was made. At that time, I wanted to scratch-build a military figure with epoxy putty and wire, so I tried various things. It was rough work, but I enjoyed the process.
スポンサーリンク
Merkava Mk. IIID Israeli Main Battle Tank Hobby Boss 1/35
Close-Combat Eastern Front 1941-1942 Master Box 1/35