It is Tristar Panzer I. Tristar was a very good manufacturer but sorry to stop working. If there are no batting items with Dragon Models, there is a possibility that it still survived. I made it from December 2007 to January 2008. 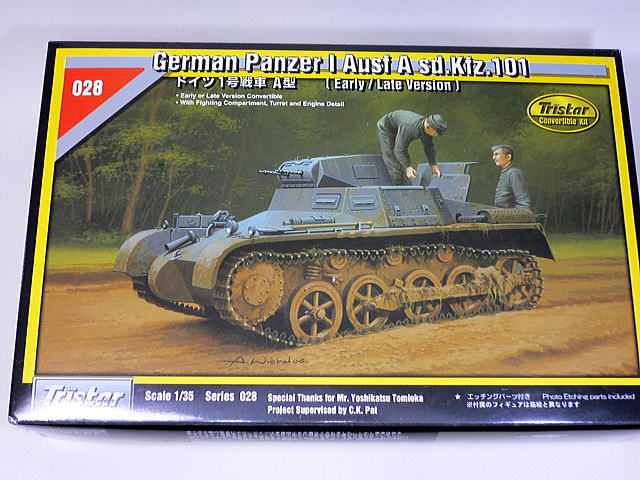 This is German Panzer I Ausf A of the Tristar kit. I think this product was released several years ago. I want to make two figures with this model.
（2007/12/22） 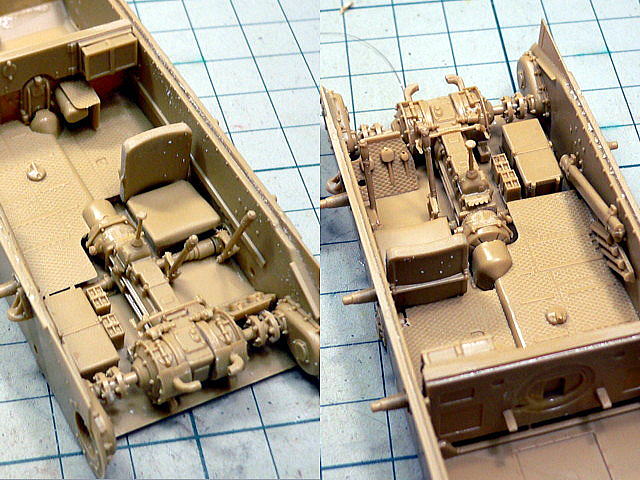 It is an injection kit and there are indoor reproduction parts from the start. The reproduction of the gear-change and the driving compartment is of high quality. Because it was a tank for two crew, it might have been unexpectedly comfortable. 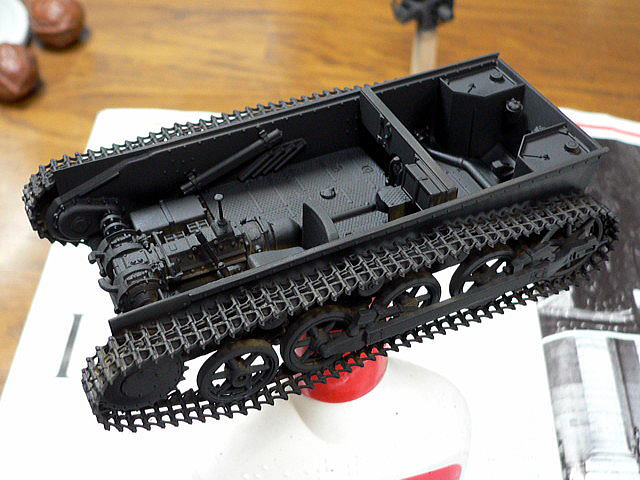 It’s my first work in 2008. Inside of the tank and the lower side of the body were painted for the time being in mat black. Maybe I’ll repaint the floor in white later, though there was no instruction in the instruction.
（2008/01/01） 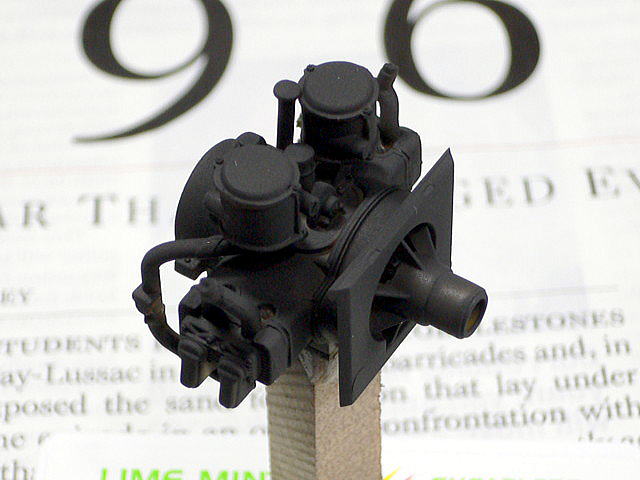 The engine was painted in the mat black. It is air-cooling gasoline of a four-cylinder horizontal engine. It was 37km per hour, engine 3460cc, and 57 horsepower at the maximum speed. 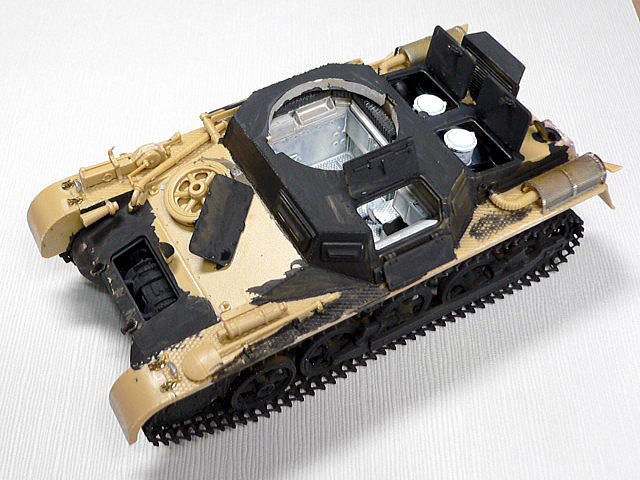 It starts working day of the company which I belonged to. Too fast to past holidays, very short holidays…..
By the way, the reason why the painting was so dirty after I had painted it in white in the tank, I thought it’s easier than first painting the borderline of inside and outside of the tank in black. And after that, I’ll blow in black. However, it became troublesome on the way, and quit painting with a brush.
（2008/01/04） 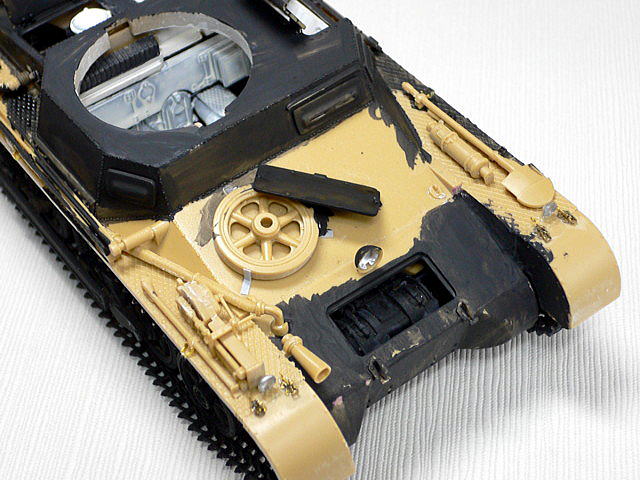 The photo-etched parts of this front fender joint are composed of 4 parts, considerably detailed. Ｔhere were four fender parts, like ascetic training.
（2008/01/04） 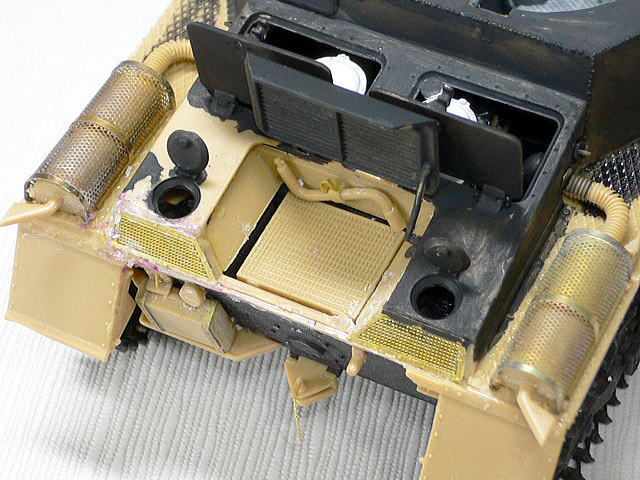 I could do good work of the photo-etched parts of the muffler cover in the semicircle. It looks very precision-looking. 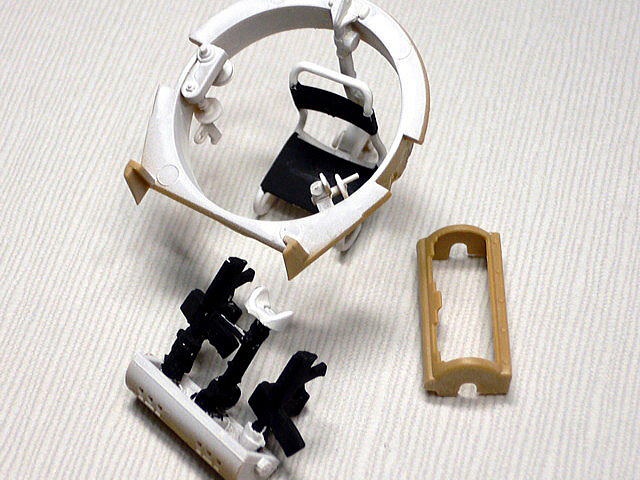 The inside of the turret was painted in white, though the inside would not be so seen if the figure is inside. 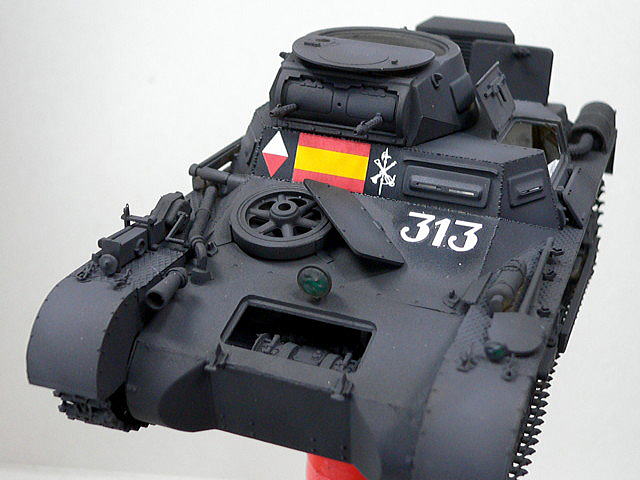 It is the marking of rebels (Franco side) at a Spanish civil war. The body was painted in matte black. 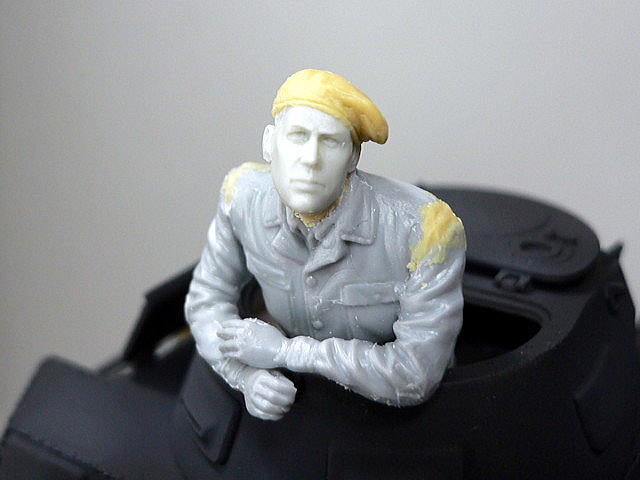 The resin head was combined with the injection figure, and the beret that was the feature of the Franco army was made of epoxy putty. 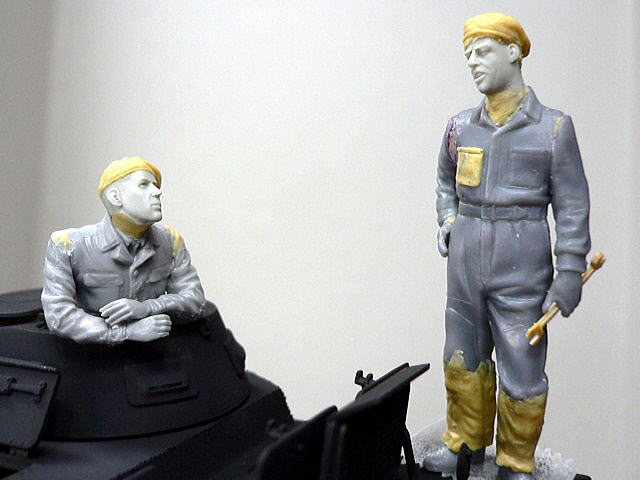 Another was a tank soldier who was maintaining the engine. I made a beret and his hair on the resin head and changed the tank crew uniform to overall. (2008/01/06) 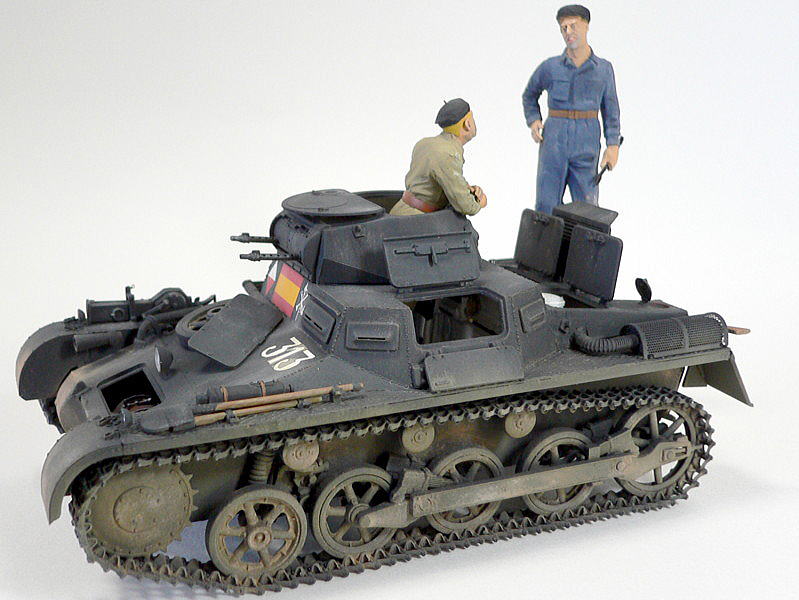 I completed Panzer I type A of the Tristar. It was developed under the pretext of the agricultural tractor, though the new weapon development was prohibited by the Treaty of Versailles after WWI. It contributed to the development of the armored strategy of a German army very much. 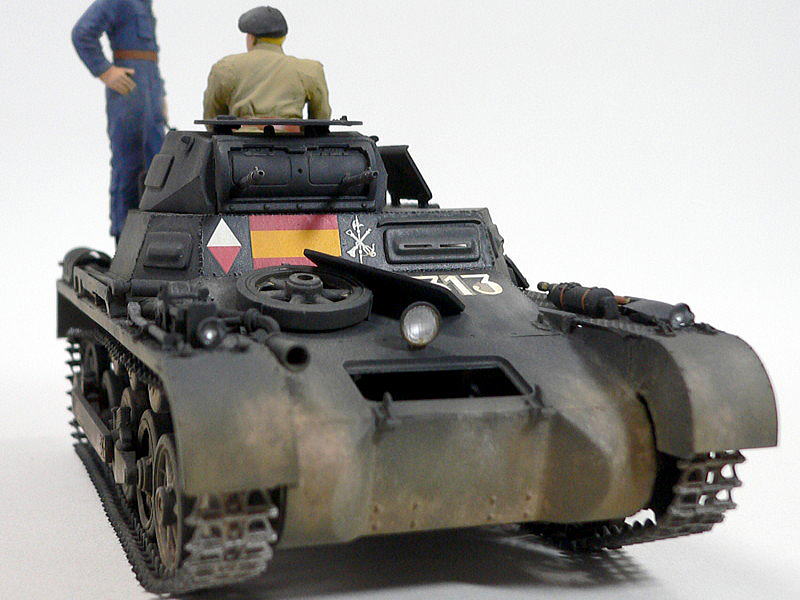 It is a marking of a German army that supports the Franco army during the Spanish civil war. The tank number decals are shining again, I should cut the blank space of decals. Clear parts were used for the front three lights, and a clear part quality feeling was able to be reproduced. 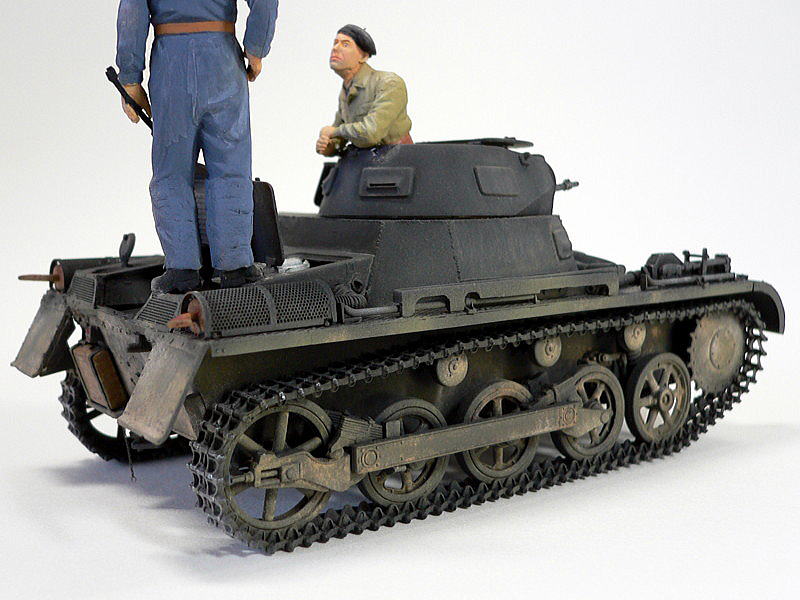 I suppose it’s dry weather in Spain, and on the chassis, I painted to do weathering like dust. 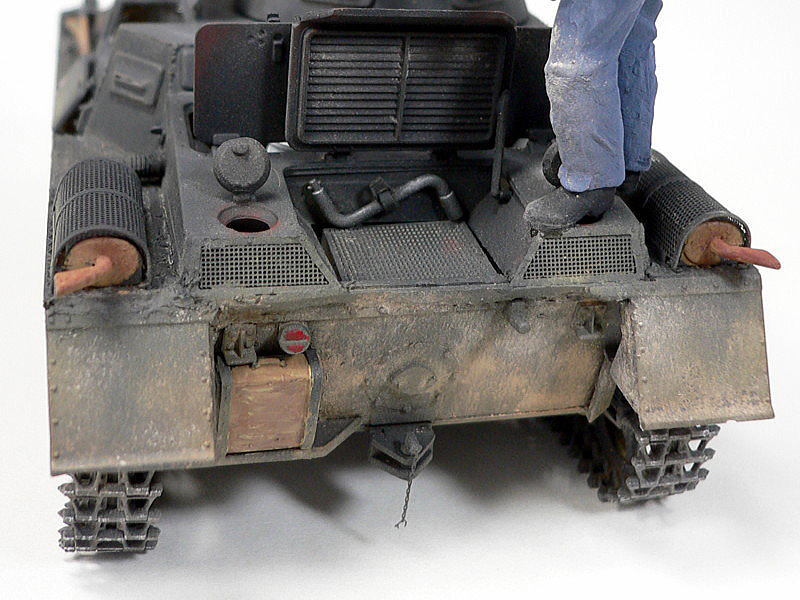 The engine panel is opened. This kit included the engine compartment parts. 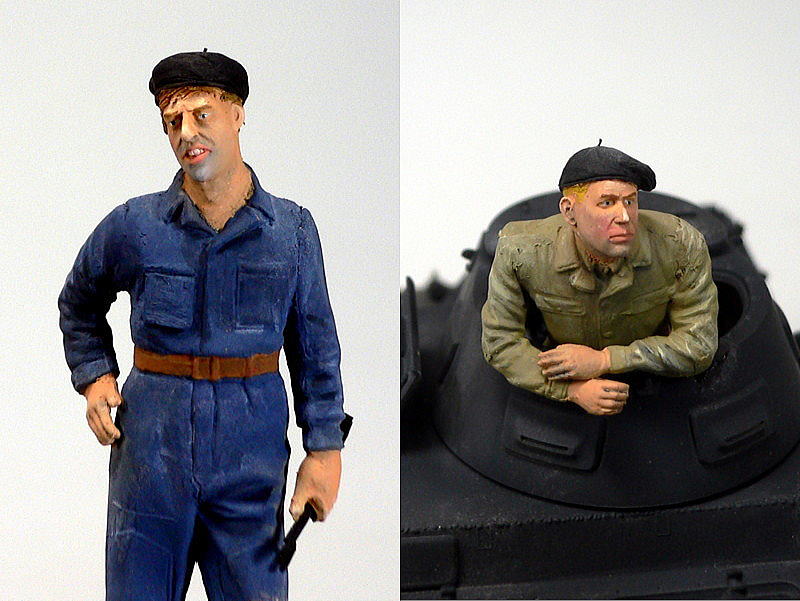 Two tank crews are talking to each other. It is necessary to see the other’s eyes and to hear the story. It is difficult to match the line of sight each other, delicate painting touch was needed. 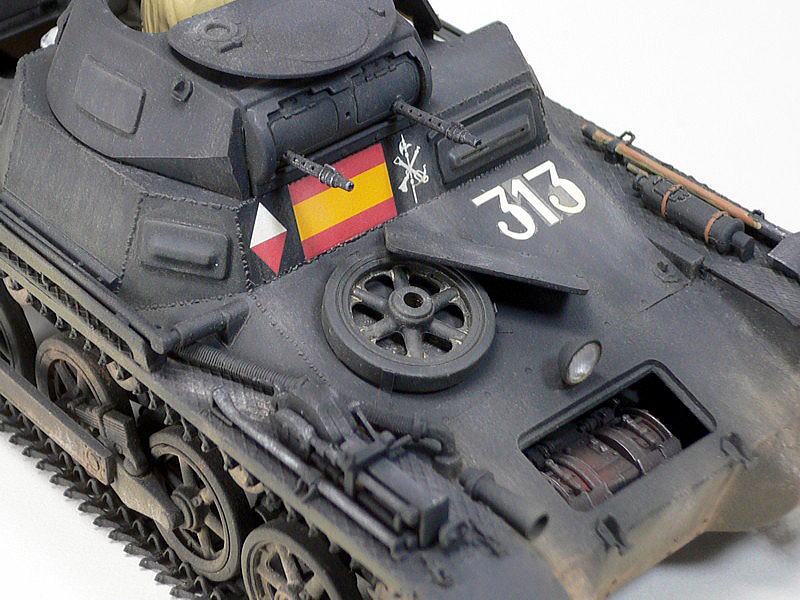 After the weathering, body-color is changed to German gray though I painted it in black first. I opened the side of the machine gun with a thin drill and emphasize the details. 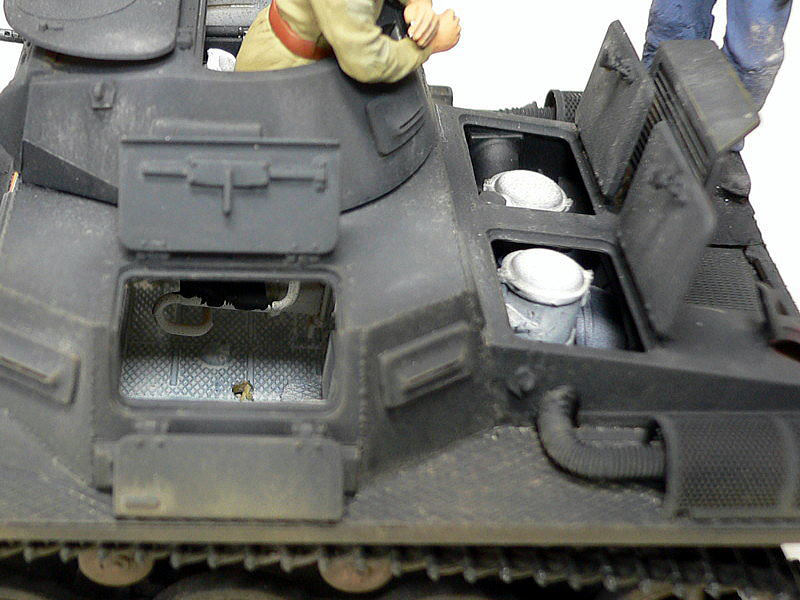 It’s negligent painting, though I said that I will beautifully paint in the tank in the making report. The vehicle structure can be understood and it is interesting though it takes time when the inside of the vehicle is assembled. 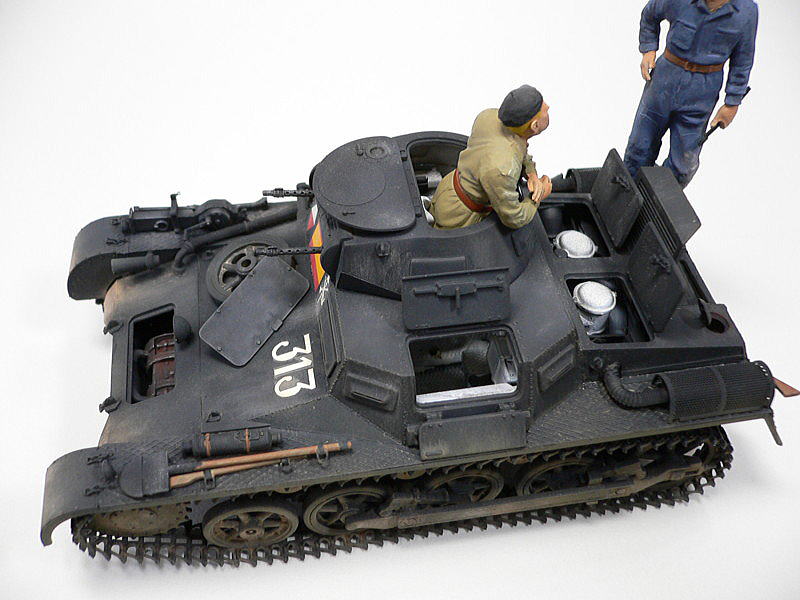 It is respected that the Tristar completely reproduced in the tank with the injection kit. I hope that this company keeps continuously developing an excellent kit.
（2008/01/12）

Gunze, now Creos, this is Creos Sd.Kfz.250/1 Neu. German army half-track. Maybe it's a Dragon OEM or something. It is a dry plastic and similar to the material of Italeri. The marking is the 2nd Armored Division, 2nd reconnaissance Battalion, 3rd Squadron, 1944, in France.

It's the Dragon Panter Medium Tank. The premium edition is worth making because it uses a lot of etched parts. The marking is Panzer-Grenadier-Division Großdeutschland at the time of the participation in the Battle of Kursk in the summer of 1943.

It is an Italeri kit, a type equipped with an anti-aircraft gun of SWS Flak43 German half-track heavy military tractor. The track is partially connected, so you can easily create a hanging feeling. For the first time in a while, the paint peeling is expressed by the hair spray technique.

It is a standard 251 half-track of AFV Club. The marking was the vehicle of the 2nd-SS Panzer Division "Das Reich". By the way, Das Reich is German meaning "nation". It was a vehicle around July 1944. In February 1944 Das Reich Division was reorganized and supplemented and it was transferred to the direction of Normandy from the Eastern Front.